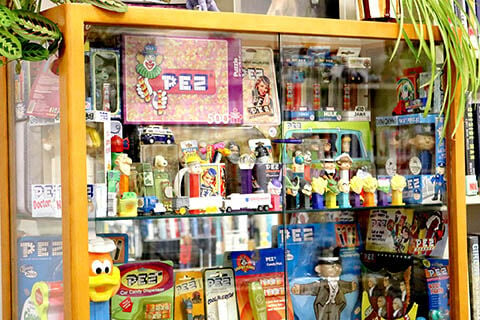 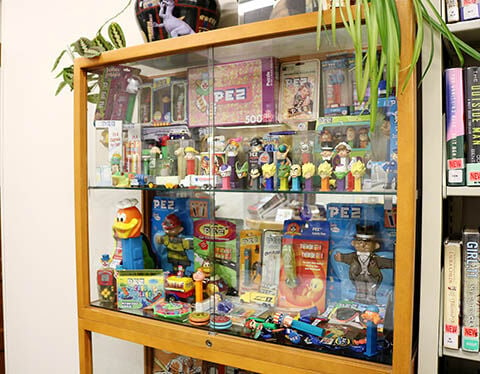 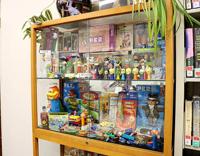 SMITHFIELD – For the month of September, the East Smithfield Library will be showcasing the Pez collection owned by resident Russ Collins.

Collins said he began collecting them as a child 35 years ago when his mother would buy them for him.

“When I was a child my mother used to work at Adams Drug Store and would buy us Pez dispensers all the time,” he said. “I’ve saved them all since.”

Collins began seriously collecting Pez dispensers around 1985 and would purchase and sell them around Rhode Island.

“In the 1990s I had a couple of booths in Vinny’s Antiques in Cranston where I would sell them,” he said.

He says his most valuable Pez is likely the “Make a Face” one, which is worth about $3,000, but his favorite is his Batman with a cape.

Along with thousands of Pez dispensers, Collins also has a large collection of Pez memorabilia. Some of these include Pez banks, pins, vintage signs, puppets, Christmas ornaments, balloons, pens, bobble heads, and toy guns. One of his favorite Pez memorabilia items is a glow-in-the-dark truck.

The Pez that are on display at The East Smithfield Library are the smaller members of his collection, which come from Japan. His largest Pez is a “Lost in Space” silver robot, which measures 18 inches.

More of his Pez collection can be found at the Pez Visitor Center in Orange, Conn., where he has donated parts of his collection.

Pez was first marketed as a compressed peppermint candy in 1927 in Vienna, Austria. Today, the company sells and markets its products worldwide with locations in Orange, Conn., and Traun, Austria. Between them, the two locations distribute approximately 70 million dispensers and 5 billion candies per year. Pez products are available in more than 80 countries worldwide.

Pez Candy was invented in Vienna by Eduard Haas III as an alternative to smoking. The name Pez comes from the German word for peppermint, “PfeffErminZ” taking the P from the first letter, E from the middle and Z from the last letter to form the word Pez. In 1952, Pez came to the U.S. In 1973, the company built the first candy manufacturing facility in Orange, Conn. In 2011, it opened the Pez Visitor Center.