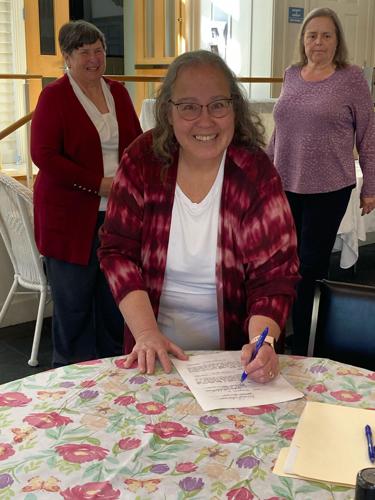 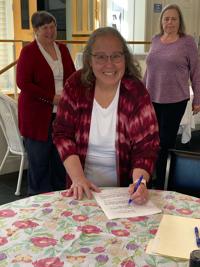 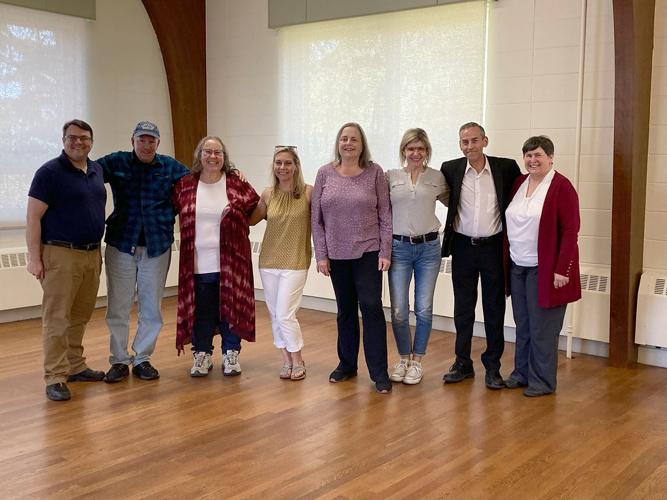 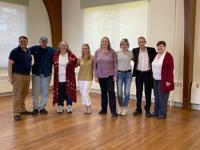 WOONSOCKET – Back in June 2021, Executive Director and Head Chef Jeanne Michon hoped that they would have a new location for New Beginnings by Christmas.

Unfortunately, that deadline came and went. They continued to search and wait – until last Saturday, when their prayers were answered and a lease was signed.

Because New Beginnings is beholden to the Department of Health, in most cases, renovating a kitchen to meet their needs proved to be cost prohibitive.

Then, in February, All Saints Church closed, and the heat went off.

“I went in on Feb. 8 to cook and I could see my breath in front of my face. So I posted a video to Facebook and someone who knows Reverend Peter told me to call him. So I did, and that’s how this started,” Michon said.

Rev. Peter Tierney, who serves both St. James Episcopal Church and St. Mark Lutheran Church in Woonsocket, said he had an idea of the parishioner who tipped Michon off. “She was asking all the time, ‘What’s going to happen to New Beginnings?’ And I said I’d heard through the grapevine that they had a place and was sure they were going to land somewhere,” Tierney said. “And then Jeanne called and asked to see if they could come by and see if (St. James) could be something they could work with.”

Their new kitchen is above ground, unlike their previous kitchen in All Saints. Michon said that it was February when she first toured the kitchen, the facility was welcoming, and the sun was shining.

“I said, ‘We’re coming, no matter what it takes, we’re coming. Otherwise, we’re closing, and that’s not an option,’” Michon said.

Their last day in the All Saints kitchen will be May 13. Their plan is to begin serving out of St. James the first full week of June, starting on June 6.

Before they move in, they need to get contractors into St. James to put the finishing touches on the kitchen to make sure it’s compliant with the Department of Health. This will include installing a three-bin sink and a tankless hot water system, fixing the electrical to work with the installation of commercial refrigerators and freezers, and getting their final business certification.

Currently, New Beginnings serves up to 140 lunches per day. While most are distributed in-house, some are also delivered to Safe Haven and the Harvest Church. Brien said that she hopes they’ll expand to providing meals to the immediate area around St. James, including Crepeau Court and Chateau Clare.

The meals that Michon cooks for her customers are not a PB & J or a cold lunch, Brien pointed out. “It’s a hearty, hot, well-balanced meal.”

Each lunch includes a roll, a starch, a vegetable, a protein, a dessert from Wright’s Dairy Farm, and a drink when they have them. Michon mentioned that she’s excited to cook soup again, which is offered as a part of the complete lunches that she prepares.

It’s clear from the collaborative attitude between their leaders that St. James’ ministry and New Beginnings go hand-in-hand. Tierney spoke of how he’s been familiar with New Beginnings for years through the ecumenical community and web of community action organizations in Woonsocket.

“New Beginnings just fits with what St. James does. We want to open our doors, we want to be a community resource for community connection. We want people to know they’re loved and cared for,” Tierney said.

New Beginnings accepts volunteers to wipe down tables after people leave, servers, and bathroom monitors. Financial contributions are also always appreciated, and can be made via the Unipay button on their website: https://www.newbeginningskitchen.com/.

They’re also now limiting their donation acceptance to food items only, but toiletries and clean clothing items can be donated within St. James church.

“Everything has fallen into place here. It’s taken a minute but it’s a learning process,” Michon said. She made reference to “little blessings” along the way more than once, one being that a mover came to look at their All Saints location and had to apologize for even coming. “He said, ‘We don’t do this kind of work,’ but he gave me the number for a commercial mover even though he wasn’t supposed to. He said, ‘I believe in what you’re doing.’”

“Not going to lie, I wanted to give up once or twice, when no one was calling back.” Michon said softly. “But then the little blessings. You kind of look at them, so the picture isn’t so big anymore. And here we are.”

“The most important thing for people to know is that we aren’t going anywhere,” said Brien.