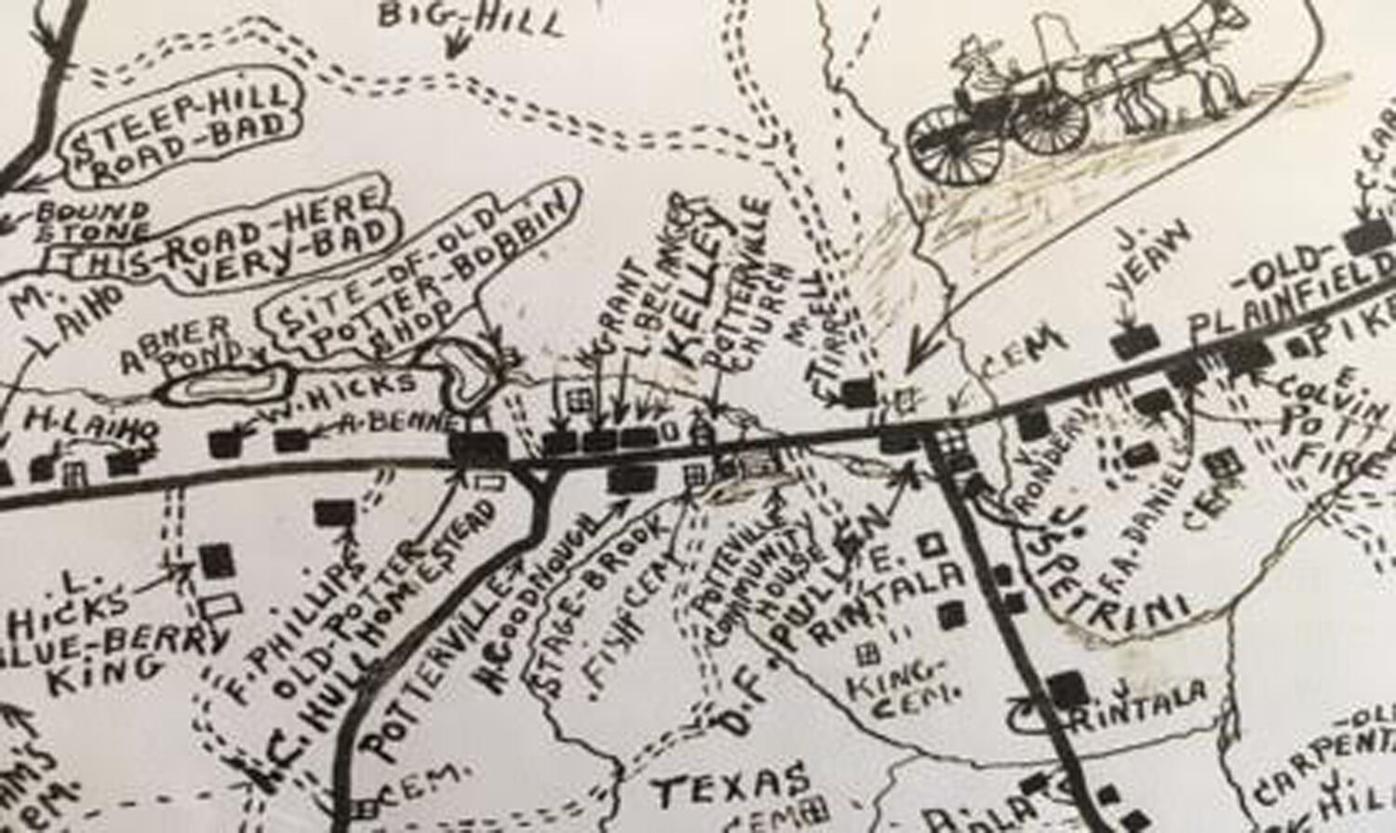 A George Matteson map showing the Potterville area of Scituate. 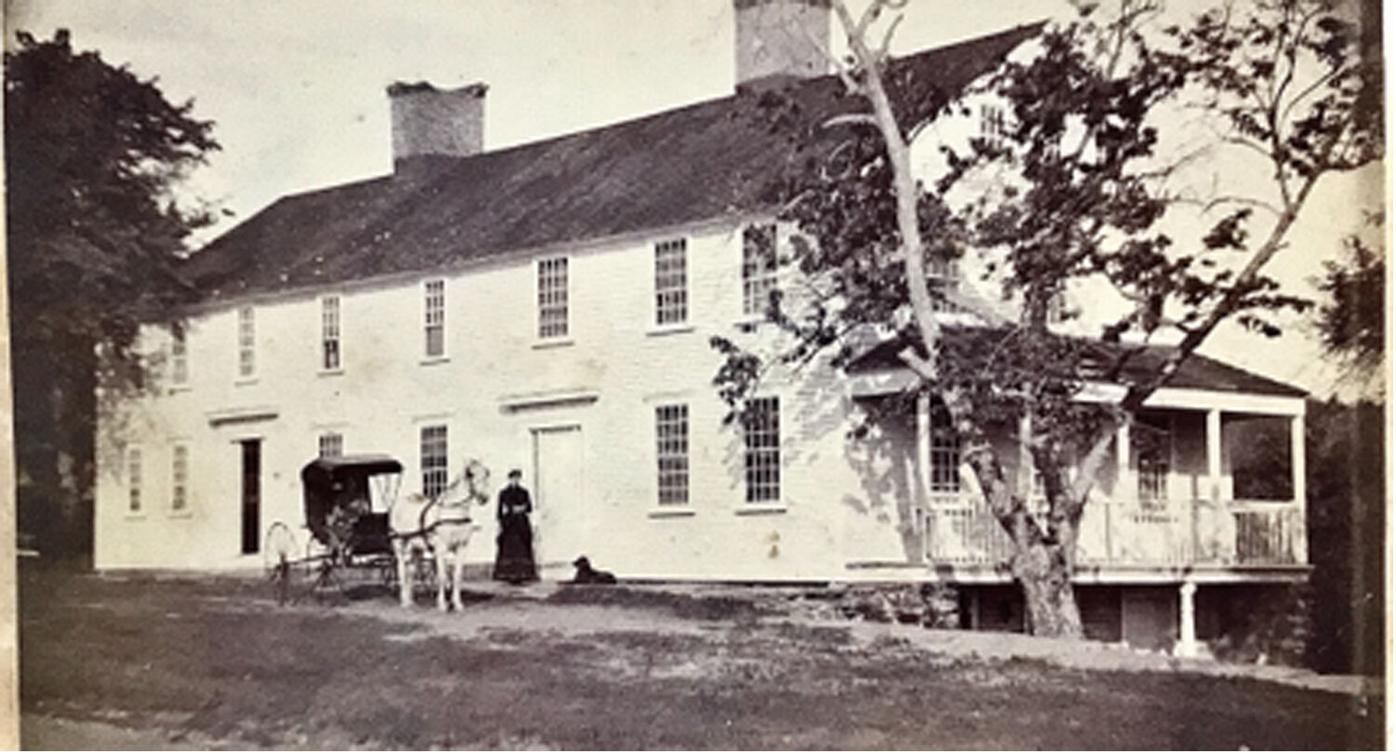 The first photo of the Potter homestead taken circa 1870.

A George Matteson map showing the Potterville area of Scituate.

The first photo of the Potter homestead taken circa 1870.

SCITUATE – Mills, mansions, museums, mobsters and more are promised in the new educational series about the rich history of Potterville as told by two resident historians on Nov. 13.

Linda and Steve Kornatz moved into the historic Potter family home in 2009, with minds full of questions about the history of the home, prompting a journey of research over more than a decade culminating in the first of a series on Potterville’s history.

Steve said the presentation, named “Potterville: Mills, Mansion, Museums, Mobsters and more” is slightly tongue in cheek. It will tell stories about the mills of Potterville, mansions built by wealthy mill owners, museums such as Steve Yeaw’s front yard tractor museum, and mobsters from the Patriarca crime syndicate who made a home in the rural town.

Potterville sits in the southwest corner of town bordering Foster and Coventry with the Old Plainfield Pike running through its center.

Speaking with The Valley Breeze & Observer, Steve Kornatz said the couple’s research began centered around their historic Potterville home, which housed the village’s namesake family, beginning in the 1800s.

When the pair started, information on the village at the library and Town Hall was sparse.

So, Linda and Steve began talking to neighbors and thinking outside the box to find information. What they found provided more information that could be told in the hour-long presentation, Steve said.

“It really started with the idea, talking with some people at the Scituate Preservation Society and Hope Historical Society. We really wanted more information about our house and the people who lived there,” Steve said.

He said Potterville was one of 19 different districts in the town, most of them remaining underwater today due to the creation of the Scituate Reservoir. Each district had its schoolhouse, including Potterville.

“Stagecoaches would stop at the tavern for travelers to get something to eat, stay the night – it was the history of the area – and continue along their journey,” Steve said.

The home remained as a tavern until 1847 or so, he said, when electric rail lines cropped up in the area to enable quicker and more comfortable travel. The homestead was converted again to a mill by Moses Potter, who created a three-acre millpond from the creek a couple of hundred yards from the home, Steve said.

The mill, which created bobbins and spools for the textile industry, burned down and was rebuilt before it went out of operation nearly 80 years later, Steve said.

Outside of his homestead, Steve said he and his wife discovered more history about Potterville from talking to residents. He said Potterville was a hub for Scituate before the reservoir came to be, attracting many wealthy residents and housing mansions for wealthy mill owners.

The series, “About Scituate,” is a collaboration between the Scituate Preservation Society and Hope Historical Society, with hopes to inspire other residents to research their own Scituate village.

After all their research, the couple found more information than they bargained for, saying they still have more research to tackle. Both feel there can be more than one series in the Potterville “About Scituate” presentation. When all is said and done, the pair said their information will be given to the SPS and HHS.

“This will be a good starting point to get these sections of town fleshed out to get a lot more detail on them,” Steve said.

They said they are hoping to inspire others to conduct research and host the “About Scituate” series in other villages in town.

“There are anecdotal stories you can only get from people who have been here in town for a while that we need to get down before they disappear,” Steve said.

“About Scituate” will be presented on Saturday, Nov. 13, at the Potterville Fire Department, at 953 Tunk Hill Road, starting at 2 p.m. It is free, and refreshments will be served.

• Each of the 19 districts had its schoolhouse, with many remaining today. The Potterville Schoolhouse, built in 1852, sits at 316 Old Plainfield Pike.

• Potterville and Scituate were a hub of mills due to the many creeks to power the mills. Earl Potter later started a mill in Cranston dedicated to making shoelaces.

• The Joslin family, who manufactured corset laces and shoelaces, built a “massive” mansion in Potterville, which was later razed by the Providence Water Supply Board.

• The 1914 Potterville Old Homes Day celebration brought in more than 700 attendees, featuring events such as baseball games and a capture a greased pig contest.