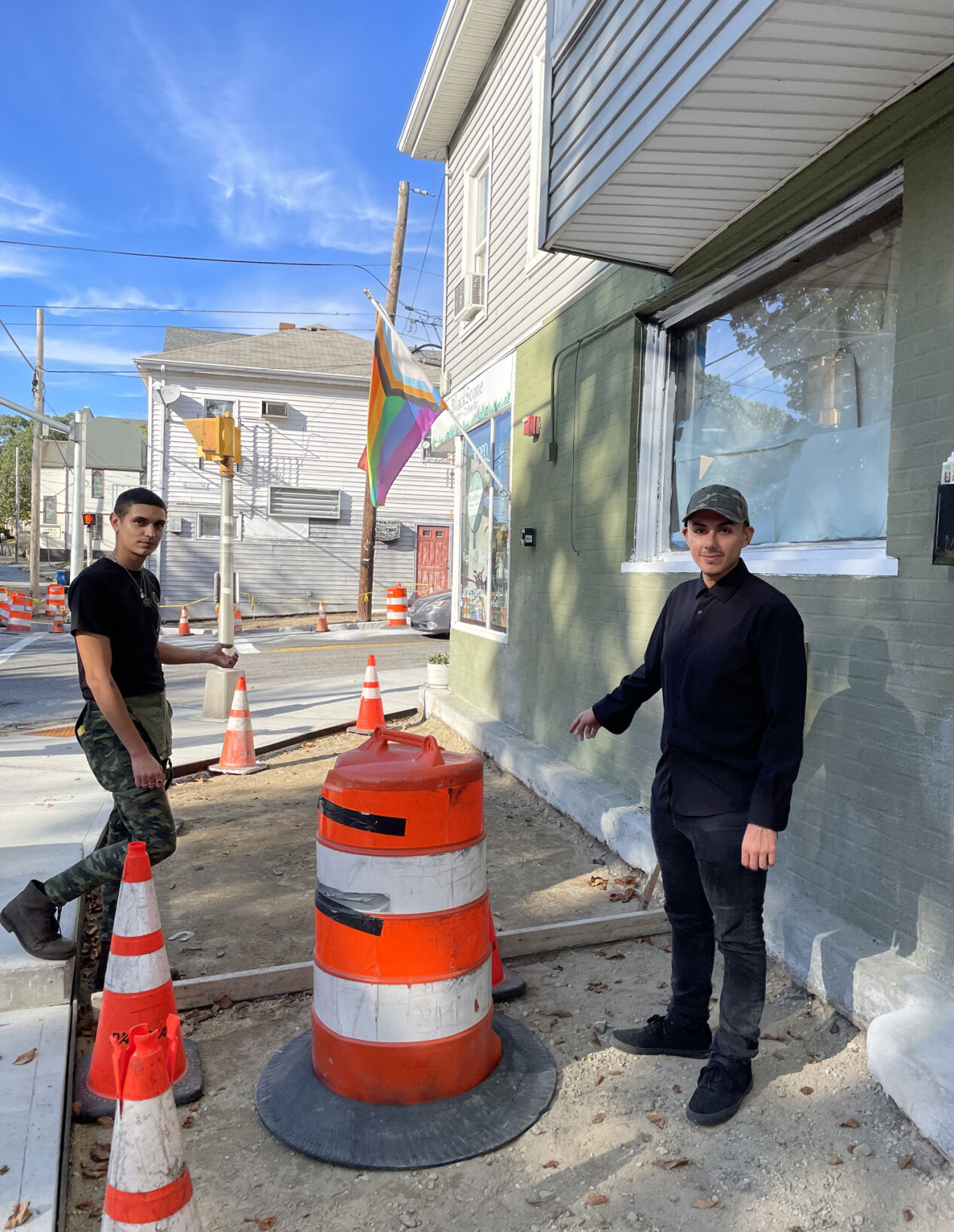 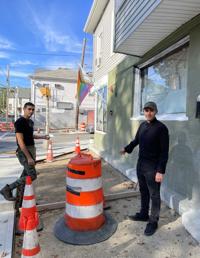 Christian Torres, left, and Eddy Sandoval, co-owners of Blackstone Herbs and Coffee Bar on the corner of Broad and Dexter streets in Cumberland, stand among the construction outside their coffee shop on Tuesday. Sandoval said the ongoing construction on Broad Street, including the ripping out of sidewalks, has been taking away parking for customers and negatively impacting their business. 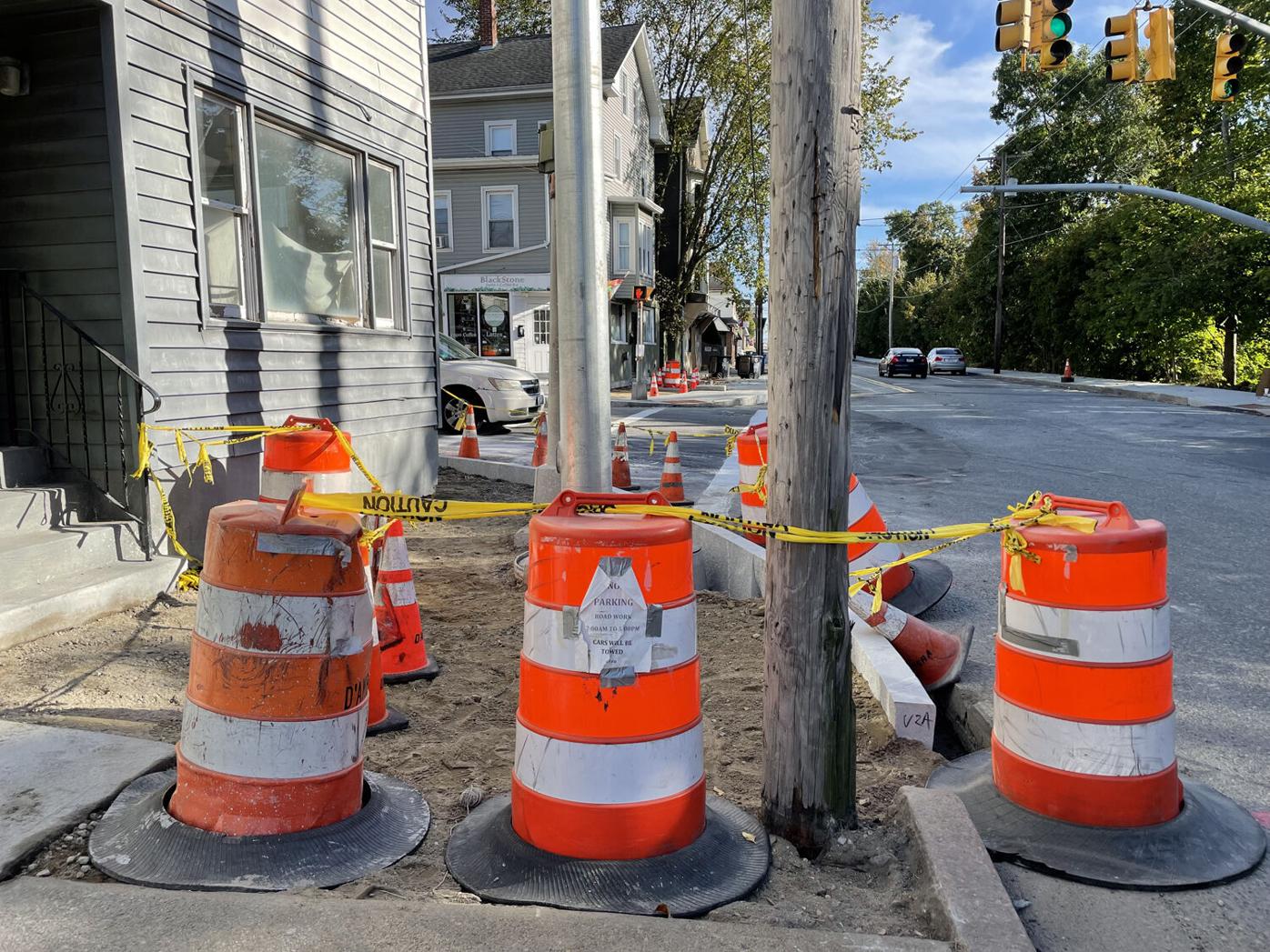 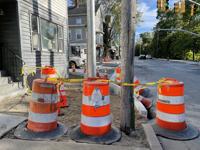 As part of ongoing construction on Broad Street, traffic barriers were set up along the corner of Broad and Dexter streets in Cumberland Tuesday blocking off the ripped up sidewalks.

Christian Torres, left, and Eddy Sandoval, co-owners of Blackstone Herbs and Coffee Bar on the corner of Broad and Dexter streets in Cumberland, stand among the construction outside their coffee shop on Tuesday. Sandoval said the ongoing construction on Broad Street, including the ripping out of sidewalks, has been taking away parking for customers and negatively impacting their business.

As part of ongoing construction on Broad Street, traffic barriers were set up along the corner of Broad and Dexter streets in Cumberland Tuesday blocking off the ripped up sidewalks.

CUMBERLAND – As construction continues on Broad Street as part of a three-town regeneration project, increased traffic and sidewalk removal have created what local business owners are calling a nightmare.

“It’s been pretty brutal,” Eddy Sandoval, co-owner of Blackstone Herbs and Coffee Bar at the corner of Broad and Dexter streets in Cumberland, told The Breeze last Friday, describing the major impact the construction has had on business.

As part of the state-led project, crews ripped up the sidewalks in front of the business several months ago, Sandoval said, and there has been no parking available for customers looking to go to the coffee shop. The owners, who experienced their first summer since opening last October, have been forced to close a couple of days a week due to the construction, he said.

Sandoval said he doesn’t think the businesses along Broad Street were prioritized correctly when planning for construction, but once the project is complete, he said he hopes it’s an overall positive for the community.

“They left us struggling for months,” he said. “It’s been pretty terrible.”

Sandoval added that he’s grateful for the customers who have to park five minutes or more away and still come into the shop.

“I love what we do, and I definitely want to stick around,” he said.

He noted that he also lives on Broad Street, but said construction hasn’t affected his home yet. “They haven’t worked on my driveway yet,” he said. “I hope when they do, it won’t take long.”

“People are frustrated,” he said. “No one wants to come by. … Other businesses are suffering too.”

Amaral asked why crews couldn’t do the work at night so as not to disrupt businesses during the day. Charles St. Martin, spokesman for the Rhode Island Department of Transportation, responded that construction generally takes place from 7 a.m. to 3 p.m. because of the high number of homes in the neighborhood that would be severely affected by construction noise at night.

When asked what businesses can do about the disruptions, St. Martin said he urges people to stay in touch with RIDOT’s business liaison office to address individual issues. “We ask for patience as we work to give Cumberland a brand new Broad Street,” he said.

“There are some issues around all construction,” he said. “It is a messy business, and that is why we have a business liaison office that starts preparing local businesses for construction well in advance of any work starting and works with them through the process to make it as painless as possible.” He said prior to the Broad Street project, there were numerous meetings with business owners and city officials that started in January 2020.

“We are deliberating working in small segments along the Broad Street corridor to minimize disruption,” he continued. “There are some lane closures, short detours and street parking restrictions. However, we have been able to provide access to the area businesses, including right up to the door during sidewalk construction. When detours are needed, we maintain northbound traffic and detour southbound traffic. We have not received any formal complaints about business interruptions.”

St. Martin said in return for people’s patience during construction, businesses will receive a new drainage system to correct chronic problems, new ADA accessible sidewalks, new curbing, traffic signals and pedestrian features at intersections. “All of this will make for a safer and more attractive business district,” he said.

Work includes a new road surface, new curbs and sidewalks, ADA improvements, new bike lanes, upgraded drainage systems and traffic signals, and a number of other pedestrian and streetscape improvements to make the corridor safer for all users, according to a project description from RIDOT. The work also includes drainage repairs on Mendon Road from Route 99 to Ann & Hope Way in Cumberland.

Construction began last year and final completion is scheduled for summer of 2023, St. Martin said. Detours and lane closures should be complete well before then, he said, adding that operations will stop during the winter and resume in the spring. During the shutdown, any open areas will be covered with concrete or asphalt.

In a project update last month, RIDOT officials warned residents to expect excessive noise, driveway/walkway and parking restrictions, raised structures, and frequent vehicle access in and out of the work zones during their weekday adjustments of utility structures and installation of traffic signal components on Broad Street in Pawtucket and Central Falls and curbing and sidewalks in Cumberland. St. Martin said work in Cumberland has included traffic signal, drainage, and curbing and sidewalk.

The latest update, posted last Friday, said that there will be weekday curbing, sidewalk and traffic signal installations with lane closures on Broad Street in Pawtucket, Cumberland and Central Falls. Detours and alternating one-way traffic patterns are possible in Cumberland, from Meeting Street to Titus Street, for weekday drainage installation, it added. That drainage work was slated to start Tuesday, Oct. 12, officials said.

Mayor Jeff Mutter told The Breeze that most of the complaints he’s heard about the construction are related to traffic. He said it’s been difficult to drive anywhere on Broad Street and even on some side streets, particularly with the added school traffic, which is creating a bottleneck down to Town Hall and Mill Street, pushing into Central Falls.

“There are not a lot of places to go,” he said. “It’s really stressing the patience of motorists.”

Phil Thornton, superintendent of schools, agreed that transportation is a challenge on Broad Street given the location of four schools all in the area. He said there are 12 bus stops in the Broad Street area from elementary, middle, and high school bus runs as well as smaller bus special education student pickups.

“We have very limited options for detours given the nature of the street layout in this part of town,” he said, adding that the bus company, Durham School Services, is exploring the idea of a larger depot bus stop concept for the Ann & Hope area.

As far as helping small businesses, Mutter said he’s working on a couple of plans that would tie in with federal relief funds and expects to present something to the Town Council.

Overall, he said, people have been very patient with the disruptions. “It’s been an interesting year and a half to begin with,” he said. “I think we’re all managing as well as we can.”

While it is a significant challenge, “we know that that’s a byproduct of construction,” he said, and looking at the bigger picture, these are necessary improvements that will hopefully energize this area of town.