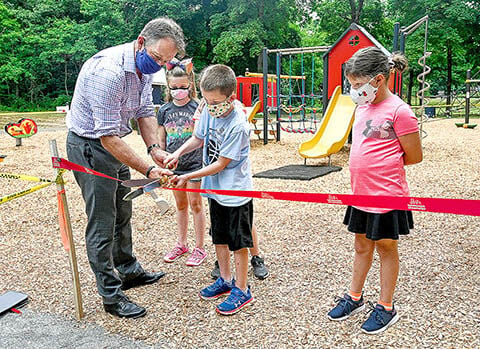 Cumberland Mayor Jeff Mutter, left, gets some help from 7-year-old PJ Mercier as they cut the ribbon to officially open the newly-renovated Community Playground on the Monastery grounds Monday morning. In the background is Skyler Grist, and Grace Mercier, far right. (Breeze photos by Robert Emerson) 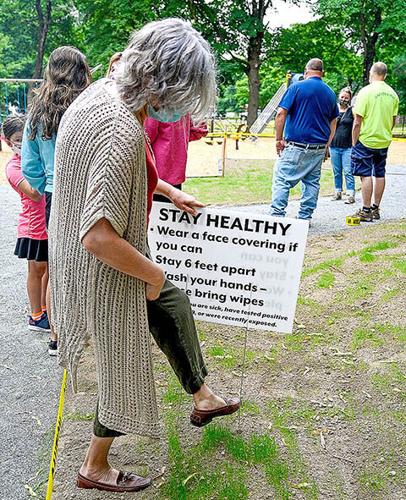 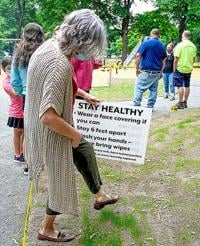 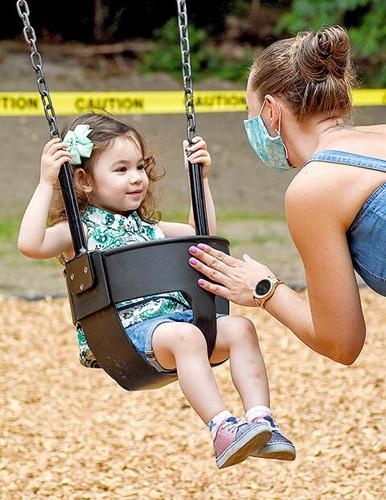 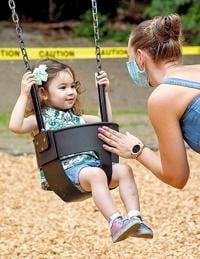 Two-and-a-half year-old Cecilia Do was the first rider on the new swings at the newly-renovated playground. Her Mom, April, is doing the pushing.

Cumberland Mayor Jeff Mutter, left, gets some help from 7-year-old PJ Mercier as they cut the ribbon to officially open the newly-renovated Community Playground on the Monastery grounds Monday morning. In the background is Skyler Grist, and Grace Mercier, far right. (Breeze photos by Robert Emerson)

Two-and-a-half year-old Cecilia Do was the first rider on the new swings at the newly-renovated playground. Her Mom, April, is doing the pushing.

CUMBERLAND – After some delays due to rain and the ongoing health crisis, a new playground officially opened at the Monastery, 1464 Diamond Hill Road, with an unveiling held Monday.

“We’re very excited to finish and be able to open up for people to play on,” said Sarah King, community outreach coordinator for Mayor Jeffrey Mutter’s office. “The plan for Monday originally was going to be a large, fun grand opening but that was not possible.”

The ribbon-cutting ceremony was a limited affair by invite only with social distancing guidelines in effect. King, Mutter, and Chief of Staff Linda Teel were in attendance, as were members of the town’s Highway Department, who were key players in constructing the playground, and Meghan O’Brien, of M.E. O’Brien & Sons, Inc., the contractor on the project.

Mutter thanked all who were involved in the project and said that he thought this playground might be the pinnacle of playgrounds in the area.

“It turned out excellent and (is) a big improvement,” Highway Supt. Frank Stowik said about the finished playground.

The first people to try it out were the children of Highway Department workers.

Driving into the Monastery, the playground is located to the right. There are signs placed around the playground telling people to wear face coverings, stay 6 feet apart, and bring wipes.

A red house area with slides was kept from the original playground. New structures include a huge, climbing pyramid with rope called the Lunar Blast. There’s also a new blue house complete with a mailbox.

There are swings on the other side of the playground along with a couple of benches, a big slide and freestanding structures. There are drums and a musical player as well as diggers to wheel up the sand instead of keeping an old sandbox.

Using funds from a previous recreation bond, King said the project cost $109,000, with Stowik adding that they saved $20,300.

It was a team effort to get the project finished. O’Brien said that King and Teel were helping in the garage to put together the structures. “It came out amazing,” O’Brien said Monday. “There is something for everyone, which is great for a destination playground. It suits all ages and skill levels.”

About a week before it opened, Stowik said that they had planted grass around the playground and it was already coming up.

“There was a lot of camaraderie and we had a good time assembling (the playground),” Stowik added.