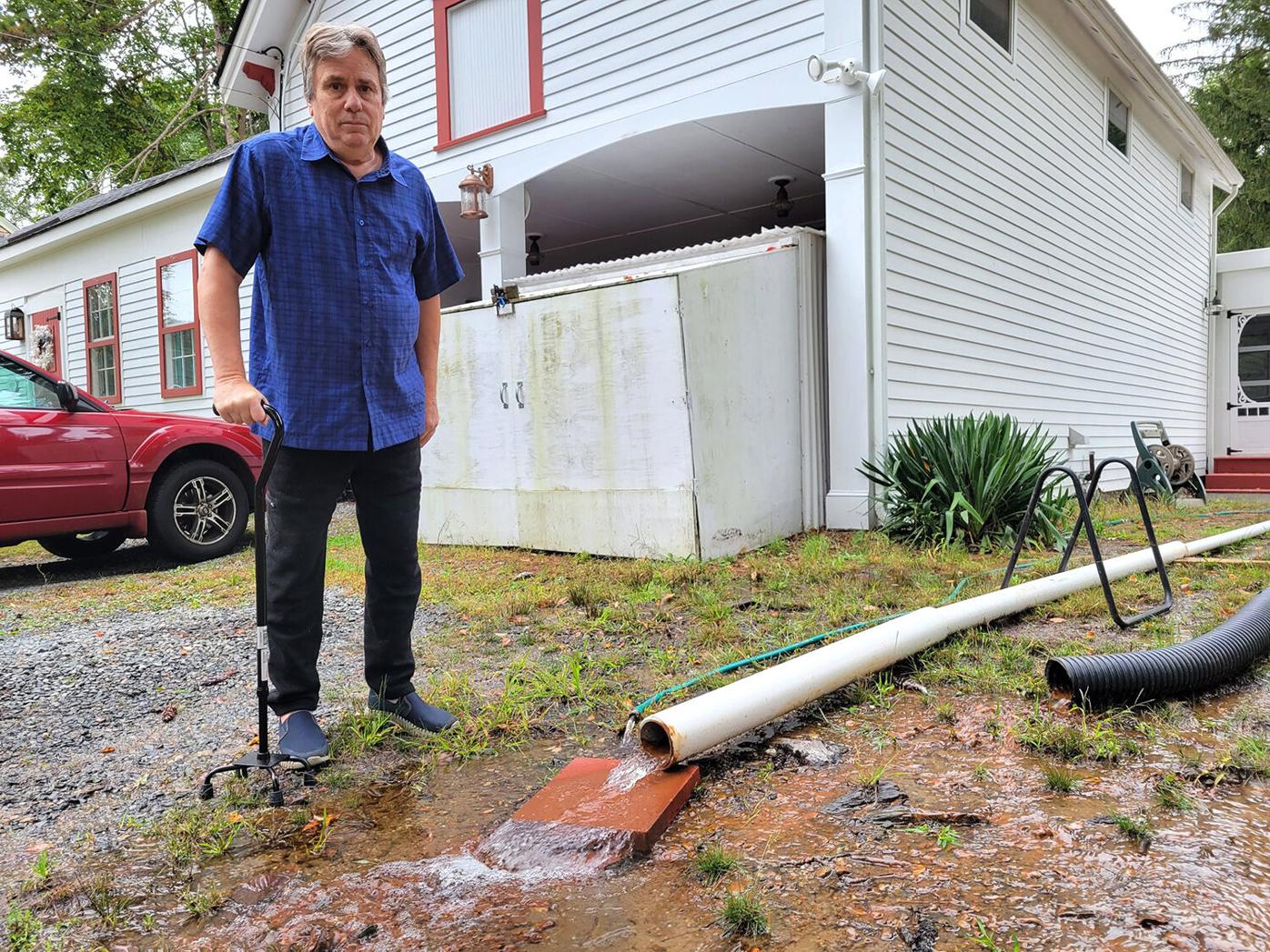 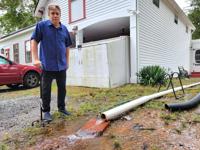 Ray Barry stands near a pipe that has been constantly pumping water out of his backyard this week. Barry and his wife, Leann, of 304 Sneech Pond Road, say a deficient pipe under the state’s roadway is leading to the bad flooding situation. 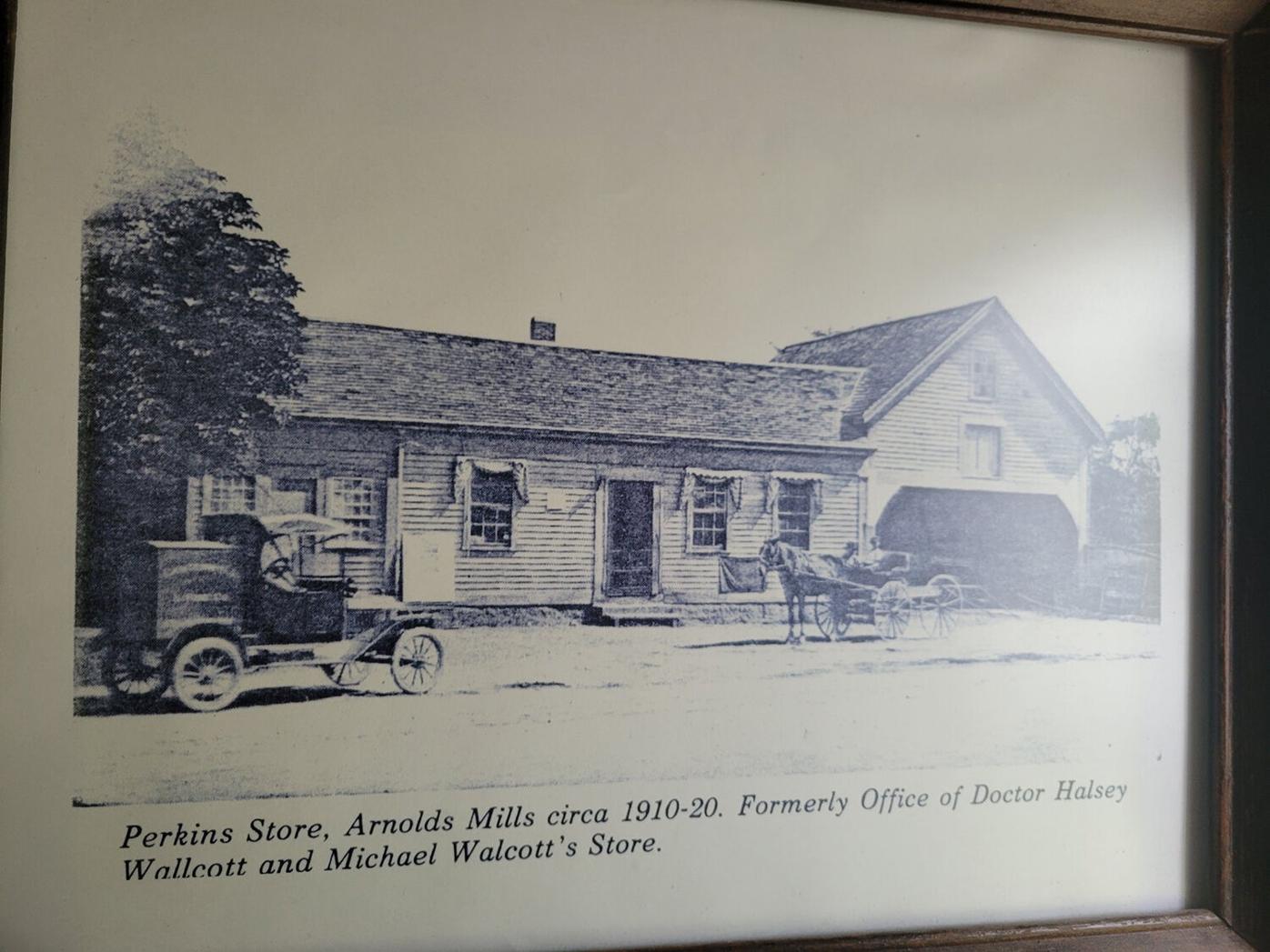 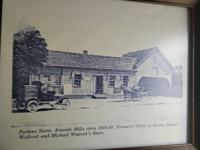 An old picture on the inside of the Barry home shows what the property once looked like as the Perkins Store. The couple have worked hard to maintain that general store look inside. 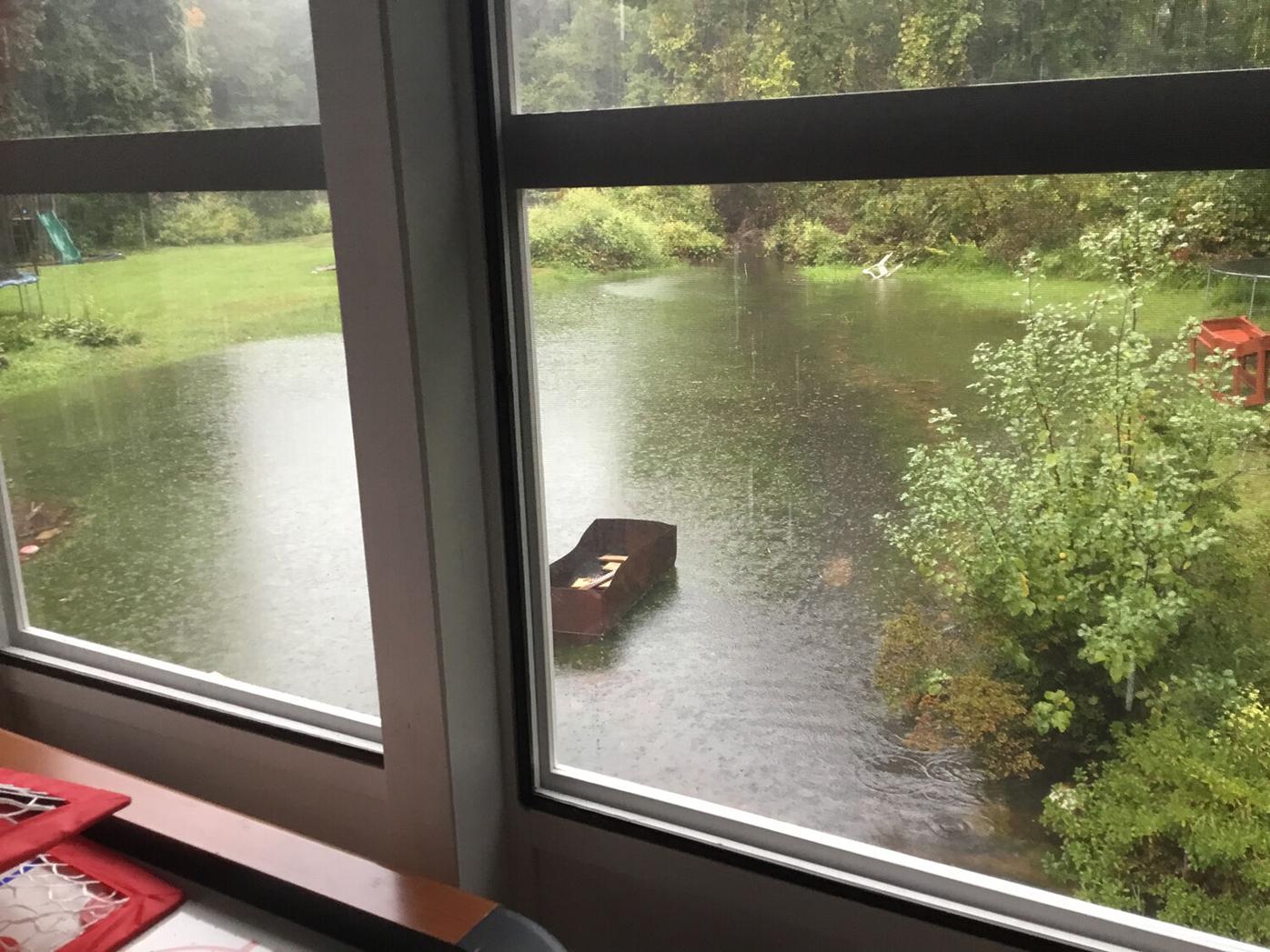 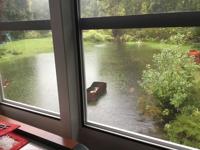 The Barry backyard during Monday’s heavy rain. The water hadn’t gone down much as of late Tuesday afternoon.

Ray Barry stands near a pipe that has been constantly pumping water out of his backyard this week. Barry and his wife, Leann, of 304 Sneech Pond Road, say a deficient pipe under the state’s roadway is leading to the bad flooding situation.

An old picture on the inside of the Barry home shows what the property once looked like as the Perkins Store. The couple have worked hard to maintain that general store look inside.

The Barry backyard during Monday’s heavy rain. The water hadn’t gone down much as of late Tuesday afternoon.

CUMBERLAND – Flooding at 304 Sneech Pond Road after heavy rain was so bad that Ray Barry and his wife Leann were forced to purchase more than $1,000 worth of sump pumps in an attempt to find their yard again. With a pump in each hand, Ray says he grew stuck in the muck of the stream near his home and ended up badly injuring his ankle when he couldn’t get out.

“We’re underwater,” Barry said Monday evening, describing what had become “one big lake” in the backyard.

According to the couple, their property continues to be flooded because no one will fix a drain pipe running under the state’s Sneech Pond Road off of Nate Whipple Highway.

But a Rhode Island Department of Transportation representative said Tuesday evening that the pipe in question was illegally installed at some point, saying it is not a state pipe and the state is not responsible for fixing it. He’s even suggesting that RIDOT might take some sort of action against the owners.

“It appears from the review of RIDOT records that this drain was installed by either the current or previous property owners without a RIDOT permit,” spokesman Charles St. Martin said.

The drain is built of a material and size not in conformance to past or present RIDOT standards, he said. Permission to install a legal drain from private property across a state road requires that a property owner apply to RIDOT for a physical alteration permit and the Rhode Island Department of Environmental Management for any necessary soil, erosion control and wetlands permits, he added.

Town property records show the Barrys have owned the property since 2005. It appeared to be in one family for more than 100 years before that.

“It’s ridiculous, so ridiculous,” said Leann Barry of RIDOT’s response that her family might somehow be responsible. “We’ve been here 16 years. How could we dig up the road without our neighbors knowing about it?”

This is an old clay pipe, she said, clearly installed long before they were here.

Leann posted Monday expressing her frustration with a situation she and her husband said was so avoidable, a problem they first alerted officials to three months ago when a sinkhole formed in the roadway.

“We are trying to protect a 200-year-old property on Sneech Pond Road, which is part of Cumberland’s history,” she wrote. “Built by Dr. Halsey Walcott in 1816, (it) then became the Perkins Store after that. If we can’t stop this water, Cumberland will lose yet another piece of its history,” she added, but, she added, it looks like officials don’t care.

Leann said the flooding is happening because sand from the road blocked the pipe that drains a stream connected to the Arnold Mills Reservoir behind their home. Ray said when he first saw the sinkhole in July, the state put a covering over it. Water is now washing out the road under the pavement, he said.

The home at 304 Sneech Pond Road is recognizable locally for the old-time carriage out front.

State Rep. Jim McLaughlin and Mayor Jeff Mutter said early this week that they were doing their best to find a solution to help the Barrys. McLaughlin said Tuesday afternoon that he had assurances from the state that the pipe and whatever is wrong with it would be fixed.

Mutter said he thought RIDOT had solved the problem after the roadway collapsed with a sinkhole weeks ago. After conversations with RIDOT Monday, he said he anticipated that the state agency would send someone to assess the situation on Tuesday.

The Barrys said just about everything in their soaked basement is now up high on pallets. The pumps in the yard were having a hard time keeping up as rains intensified Monday evening, Barry said, and the gravel driveway was eroding under the constant flow of water.

The couple said they’re tired of being put off by the state in saying it’s not their problem.

“No one wants to take responsibility,” Ray said.

St. Martin said Tuesday an investigation of the sinkhole on the state’s Sneech Pond Road by RIDOT maintenance crews “found a private, illegal drain coming from the backyard and running along the side yard” of the home before going under the road and discharging on the other side.

“RIDOT reviewed the recorded plans of Sneech Pond Road as far back as 1961, and the plans showed no private or RIDOT constructed drains in that location, or in the vicinity,” he said. “Also, RIDOT searched physical alteration permit records and found no permits were issued to any private property owner for installation of a private drain.”

“Since this is an illegal drain that appears to have caused damage to the state road, RIDOT is assessing whether we will make a claim against the property owner to hold him financially responsible for repairs of the road,” he said.

McLaughlin said Tuesday that whether the pipe is broken under the road or not, or who’s technically at fault for putting it in, he really doesn’t care, he just wants to see it fixed.

St. Martin said that several years ago, in conformance with a consent decree with the U.S. Environmental Protection Agency, RIDOT’s stormwater division began a process of identifying all drainage systems on state highways and identifying any illegal tie-ins to the state’s system by private property owners.

“This is an example of one of those illegal private property drainage systems and now that RIDOT is aware of this, the department is in the process of assessing further actions to eliminate the discharge or bring it into compliance with applicable law,” he said.

How much damage is being done to the road by the current solution?

The clay pipe could easily date back before 1961. However it came to be, it is there and WAS performing a purpose that has not been a problem. Enough with the red tape RIDOT, fix this!!!

Absolutely, date back before 1961. This is an outrage. RIDOT fix the dam drain, its under a road/highway that's under your jurisdiction. Perhaps when the road was designated as a State Road, under the State's possession (Whenever that may have occurred), the pipe was already there unknown by all at that time.