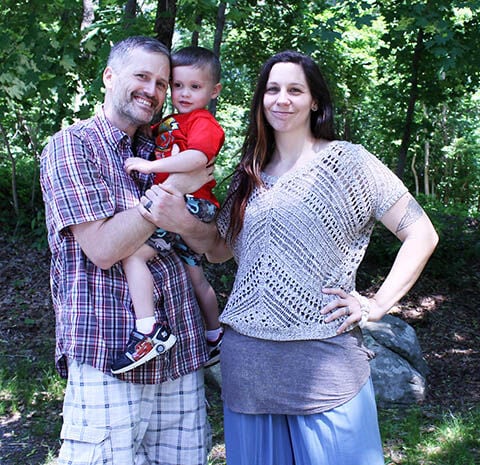 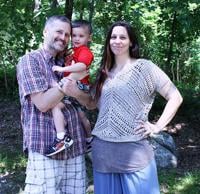 Chela Morin, right, and her husband Justin Tolliver with their son Asher. Morin’s short action film “Repentance,” starring Tolliver will be screened at the Action On Screen Megafest film festival in Las Vegas in July. (Breeze photo by Melanie Thibeault) 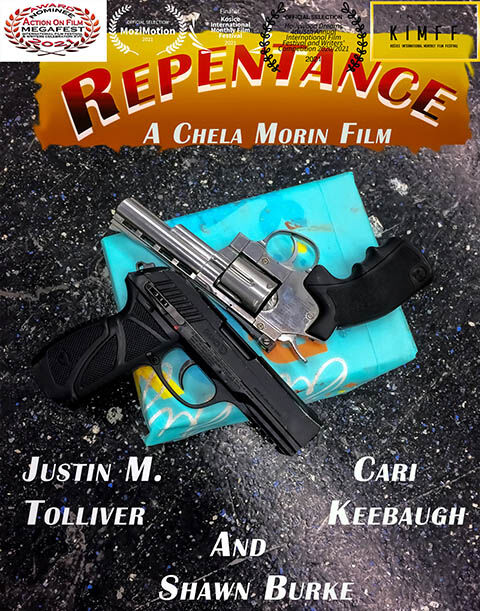 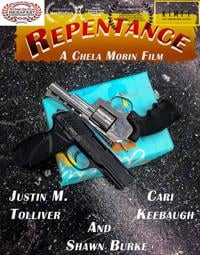 Chela Morin, right, and her husband Justin Tolliver with their son Asher. Morin’s short action film “Repentance,” starring Tolliver will be screened at the Action On Screen Megafest film festival in Las Vegas in July. (Breeze photo by Melanie Thibeault)

CUMBERLAND – What started out as a class assignment for Chela Morin to create a three-minute film has turned into a short action movie that will be premiered at the Action On Screen Megafest in Las Vegas next month.

The film, “Repentance,” written, directed, and edited by Morin, of Cumberland, and starring her husband, Justin Tolliver, is 17 minutes of “wit and gore following a hitman on the road to redemption,” according to the couple.

“I’m very excited,” Tolliver said. “I believe it turned out better than we thought.”

A description of the film, which is intended for audiences 18 and older, reads, “When a dangerous assassin decides he wants out of his guild after discovering the identity of a former target, things get ugly and his only purpose becomes living long enough to bring one last piece of the life he stole home.”

Morin, a native of Cumberland, is an actor and student filmmaker, currently enrolled in the Community College of Rhode Island’s film/media program. She and Tolliver, a native of Kenosha, Wisconsin, who’s an actor and producer, run a production company, Soul Injection Studios. They are both members of the Screen Actors Guild.

Morin’s original intent with the project, which began in 2019, was to showcase her and Tolliver’s performances to be included as part of their demo reels, but she didn’t think it would turn out to be anything she’d be this proud of, she said, noting that they faced many hiccups along the way, including frame issues as well as missing audio and special effects.

“Little by little we pieced the whole film together,” she said. “It blossomed.”

After spending some money on a special effects artist, they completed the film last October and then began the process of submitting it to film festivals, she said. The Action On Screen Megafest “is exactly where it belongs,” she said.

The experience feels a bit full circle, Morin said, since she started her acting training in Las Vegas.

At Action On, Morin and Tolliver will attend seminars, pitch parties, screeners, and an awards show. “We’re super stoked,” Morin said, noting that it’s the first red carpet event for them. At the festival, they also hope to find someone to distribute their film so the masses can watch it, she said. The festival runs from July 26 to Aug. 1.

“Just beyond excited” is how Morin describes the feeling of being accepted into the festival.

The film has also been accepted into the Hollywood Dreams Film Festival, which is running together with the Action On festival, the couple said.

“Repentance” was filmed mostly in Rhode Island, including at a U-Haul facility in North Smithfield and features New England-based actors and crew members. The couple said they are happy to keep everything local, especially since “we are seeing a lot of Hollywood films and shows coming through New England thanks to the great tax credits.”

Having their film in the Las Vegas festival can help the film market in R.I., Tolliver said. The film industry is booming in New England, and as a director, Morin said, she wants to bring even more work to the area.

The actors in “Repentance” all worked for free, Morin said, so she especially wanted to make sure she produced something she could show them. “I appreciate the cast and crew,” Tolliver added. “Without them it wouldn’t have been possible.”

The couple’s young son, Asher, also had a small role in the film and has been in a few commercials, Tolliver said.

“This project was a lot of fun, and playing the villain is always a good time,” said Cari Keebaugh who plays Jacqueline, the film’s mysterious antagonist. “Working on ‘Repentance’ was a blast, I was so happy with how it came out, and the cast and crew were great to work with.”

Morin, who grew up in Cumberland and graduated from Attleboro High School, said she wrote her first script in the 8th grade about some medieval peasants who wanted to be knights. She grew up watching action movies, such as “Scarface,” she said.

Next year Morin, a mom of two, plans to graduate from CCRI with an associate’s degree in communications and a concentration in film and media. She also has a sitcom pilot, which is set in New England, that she’d like to start submitting, she said.

To watch the trailer for “Repentance,” visit youtu.be/yhwu9QQFM40 . The couple’s other short film, “The Ice” is available on YouTube and Amazon Prime.