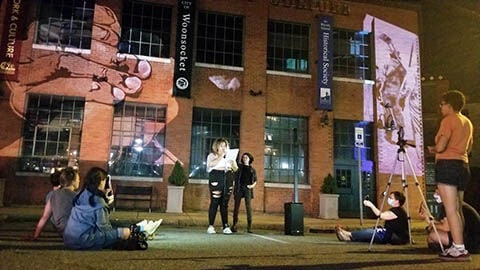 Performers associated with The Womxn Project speak about Woonsocket’s abolitionist ties during a performance outside the Museum of Work and Culture on Aug. 30. (Breeze photo by Lauren Clem) 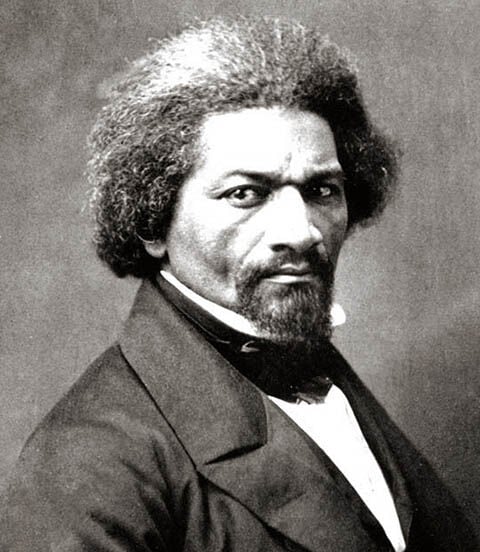 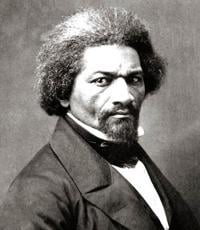 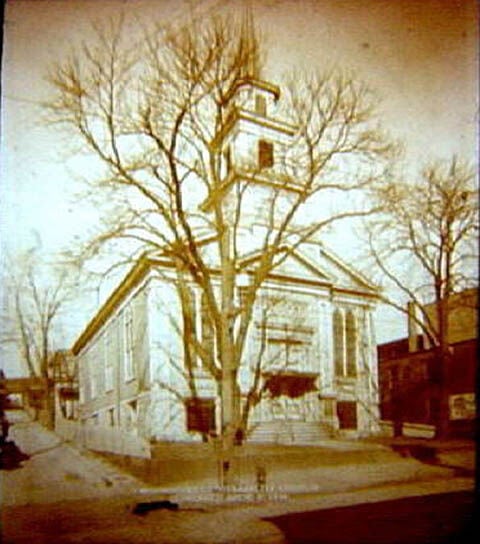 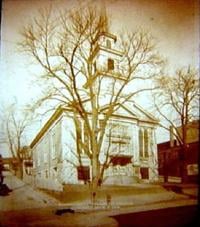 A photograph maintained as part of the Crowley-Bacon collection at the Woonsocket Harris Public Library shows the original Woonsocket Universalist Church on the corner of Church and Main streets around 1915. The church was likely the location of an abolitionist convention where Frederick Douglass spoke in 1841.

Performers associated with The Womxn Project speak about Woonsocket’s abolitionist ties during a performance outside the Museum of Work and Culture on Aug. 30. (Breeze photo by Lauren Clem)

A photograph maintained as part of the Crowley-Bacon collection at the Woonsocket Harris Public Library shows the original Woonsocket Universalist Church on the corner of Church and Main streets around 1915. The church was likely the location of an abolitionist convention where Frederick Douglass spoke in 1841.

WOONSOCKET – One hundred and eighty years ago, a man who would become one of the country’s most famous orators came to Woonsocket to speak to a crowd about slavery and abolition.

The man was not Abraham Lincoln, though Lincoln’s name is often evoked in discussions of the city’s most memorable visitors. Long before the 16th president stepped off the train at Depot Square, Frederick Douglass, the escaped slave who would go on to become a leading abolitionist, visited Woonsocket Falls, then one of several mill villages beside the Blackstone River. Unlike his counterpart, Douglass was not met with cheering crowds but with a jeering mob that forced him and his companions to leave town with their mission incomplete.

While few remnants of his visit remain, the stories that survive paint an image of a divided community. In 1841, the Dorr Rebellion swept across Rhode Island as non-land-holding citizens demanded the right to vote. Led by Providence businessman Thomas Dorr, the Dorrites drafted a “People’s Constitution” that granted suffrage to most white men but denied it to Black residents. Meeting in October, they set a date to vote on the constitution at the end of the year.

In the lead-up to the vote, members of the Rhode Island Anti-Slavery Society worked furiously to defeat the new constitution. Beginning on Dec. 2 in Woonsocket Falls, they held a series of conventions urging residents to reject the Dorrite constitution and instead expand suffrage to all men and, in some cases, women in Rhode Island. Among them was Frederick Douglass, a young orator who’d impressed the society during a speaking event a short time before.

Abby Kelley, another member of the group, described the Woonsocket event in a report published in the National Anti-Slavery Standard on Dec. 23, 1841.

“Our first session was thinly attended, but the discussions were intensely interesting,” she wrote. “The evening brought a crowded house and a mob, whose watchword was ‘n----- voting.’ After several fruitless attempts, they at length broke up the meeting.”

The sessions resumed the following day, but by afternoon, the group learned the church where they held the convention had shut them out for fear the building would be damaged by the mob. The church offered to refund the group’s rental fee, but the abolitionists refused.

“They ejected us from our own hired house. One of the most prominent suffrage mea of the place advised to shut us out,” Kelley wrote.

They had a similar reception in North Scituate, where Dorrites repeatedly interrupted the meeting and eventually convinced their hosts to put a stop to the convention, by Kelley’s account. The People’s Constitution won the overwhelming support of residents in a vote later that month.

At the time of his appearance in Woonsocket, Douglass had not yet achieved the fame that he would find as a writer and speaker over the next few years. After his escape from slavery in 1838, Douglass and his wife settled in New Bedford, Mass., where they joined the local abolitionist community. A newspaper editor from New Hampshire who heard him speak in Rhode Island described him as an “extraordinary man” and a “fugitive” who had few equals as a speaker.

Today, the memory of Douglass’ visit is maintained by groups like Stages of Freedom, a Providence-based organization working to catalogue and mark the places Douglass traveled to in Rhode Island. Co-founder Robb Dimmick, who previously portrayed Abraham Lincoln in historical re-enactments, said he has only come across two mentions of Douglass’s time in Woonsocket during his research. The first, in 1841, was for the abolitionist convention. The second, in 1868, was likely to support women’s suffrage.

“When we began this project, we knew that he had a significant presence in Newport, but we didn’t really know the depth of his presence and his constant return to Rhode Island,” Dimmick said. “He becomes the foremost orator on the abolition of slavery, and he cuts his teeth on the Dorr Rebellion in Rhode Island.”

While Douglass and his companions met with resistance in Woonsocket, the city would later become known as an “abolitionist stronghold” for its many prominent residents who supported the cause, according to Dimmick. Edward Harris, the mill owner who shares his name with many of the city’s buildings, was the first to run for governor on the ticket of the abolitionist Liberty Party. It was Harris who invited then-candidate Abraham Lincoln to the city in 1860 to speak to a receptive crowd in what’s now Harris Hall.

“It wouldn’t be beyond the realm of possibility that Douglass would’ve stayed the night in Oakley,” said Dimmick, referring to Harris’s North End mansion.

Last month, The Womxn Project, an arts group that seeks to educate Rhode Islanders about social justice issues, commemorated Douglass’ visit during a performance in Market Square. In a reading outside the Museum of Work and Culture, they discussed the convention and called on the community to recognize its history of both rejecting and embracing abolitionists. Other performances, at Brown University and Linden Place in Bristol, recalled the locations’ ties to the slave trade and slavery in Rhode Island.

Stages of Freedom recently received a grant from the Heritage Harbor Foundation to place commemorative plaques at the locations where Douglass spoke. Dimmick said they plan to start at those locations where a building remains standing. Pinpointing the exact location of the Woonsocket convention is difficult due to the fact that many of its historic structures no longer exist.

Elyssa Tardif, a former education director for the Rhode Island Historical Society, has also researched Douglass’ visit. An article she wrote for Rhode Tour, a website documenting notable sites around Rhode Island, lists the location at 99 South Main St., next to the falls from which the village took its name, but Tardif said that was intended as a general location since the exact location isn’t widely known.

Kelley’s notes indicate the speakers rented out a “Universalists’ vestry” for the occasion. According to local historian Raymond Bacon, that description likely refers to the Woonsocket Universalist Church dedicated in 1840 on the corner of Church and Main Streets. Bacon explained that the church later relocated to Earle Street, but not before giving its name to the adjacent side street. Beacon Charter High School for the Arts stands on the site today.

“There are pictures of that. We know that it was built around that time,” he said.

While Douglass’ visit leaves behind a complicated legacy in Woonsocket, reflecting both the best and worst of the city’s shifting attitude toward slavery, it’s clear the experience left an impression on the famous figure. Along with an account of the convention tour, Douglass mentions Edward Harris twice in his autobiography as part of a group of local abolitionists who supported his cause.

“There was obviously something special about Woonsocket in his memory,” Dimmick said.