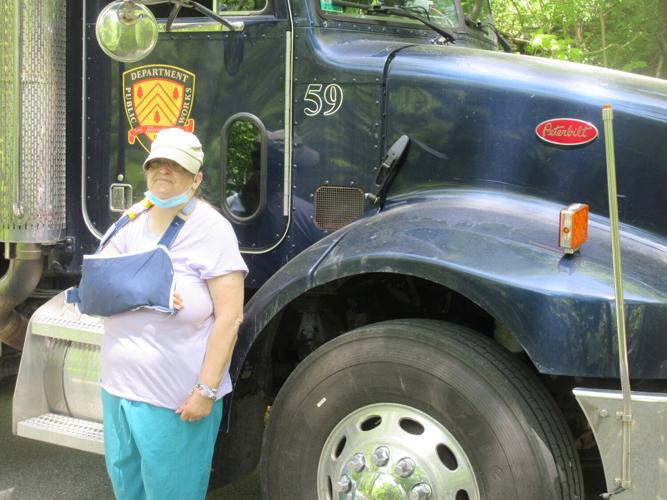 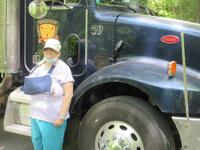 Karen Clemence of Paine Road leans against a Glocester Department of Public Works truck while her formerly dirt road was being worked on. Paine requested her road to be paved to assist in her recovery from elbow replacement surgery. 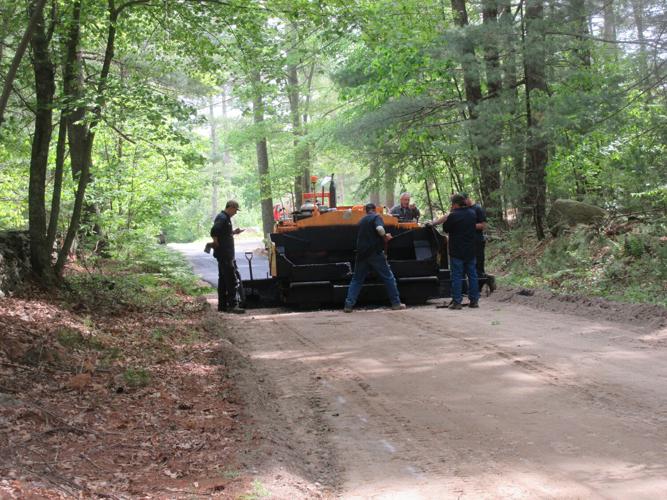 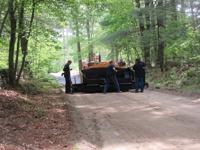 Progress on Paine Road as the road is transformed from dirt to asphalt.

Karen Clemence of Paine Road leans against a Glocester Department of Public Works truck while her formerly dirt road was being worked on. Paine requested her road to be paved to assist in her recovery from elbow replacement surgery.

Progress on Paine Road as the road is transformed from dirt to asphalt.

GLOCESTER – When Karen Clemence fell and broke her elbow in April, it began a long series of events culminating in the town showing up for her when the Department of Public Works came and paved her dirt road.

Karen was walking over to a family member’s home when she lost balance and fell. The resident is an avid quilter, and she had just sewn several quilts to be sent to victims of the Kentucky tornados. For Karen, quilting is her way of giving back and helping others. She said quilting for others is why it is so important that she regains the use of her right arm.

She landed on her right elbow, which had been injured years prior. This time, her bones shattered and she tore ligaments.

A week after her fall, Karen received a replacement elbow. Due to a rare autoimmune disease causing painful inflammation in the cartilage throughout her body, Karen’s healing process has been long, painful, and dangerous. She’s returned to the hospital several times, as well as physical therapy.

While she receiving at-home nursing care beginning last week, Karen said the recovery process has been trying. Multiple allergies make it difficult and at times impossible to treat her pain.

“There were times I had taken morphine and it didn’t even touch it. Not one bit,” he said.

On their trip home from the hospital after the elbow replacement surgery, Karen and Austin stopped at the DPW and asked them if there was any chance to get their dirt road paved, or at the very least, graded.

“It had huge, deep holes in it. I’ve said that I live on Paine Road and in many ways, many times over the years, it has been a pain without the e,” Karen said.

Driving along the Paine Road, a dead-end street about a quarter-mile long with a cul-de-sac at the end, caused Karen excruciating pain when hitting the bumps.

Glocester DPW Director Gary Treml told the Clemences he would do what he could, but he would not promise the couple that the road would be paved. No more than two days later, the Clemences woke up to Treml in his DPW truck taking a look at the road.

Still, Treml said he could not promise the work would be done. The Town Council was still working on its budget, and he could not be sure he would have enough to pave her road. He explained other roads might need it more.

“He would not say yes, but he let us know he would try to get it done,” Karen said.

For the next several weeks, Glocester DPW crews graded Paine Road. By the couple’s account, the crews removed the dirt one shovel at a time working during a heat wave. Paine Road has now been repaved.

“It was heartwarming. After the pain I’ve been in, it was a blessing,” she said.

The Clemences bought the crew pizza, but said there is nothing they can really do to show their thanks for Glocester DPW’s quick response in their time of need.

“They were incredible. It was wonderful. I am so grateful for what they’ve done for us. It’s amazing. They deserve every bit of respect and gratitude we can give them,” Karen said.

Austin agreed, and said the crews worked diligently and professionally. Both said trips to the doctor’s office are a much smoother ride thanks to the DPW.