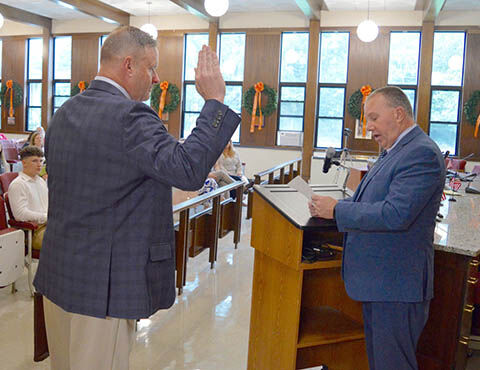 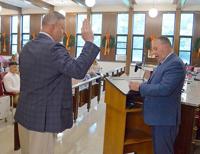 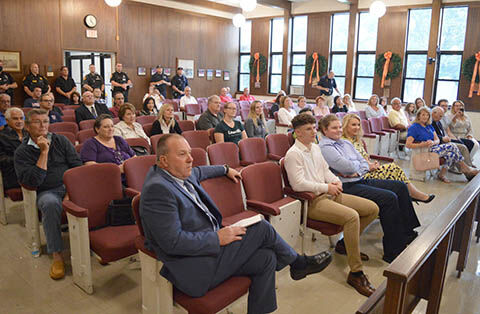 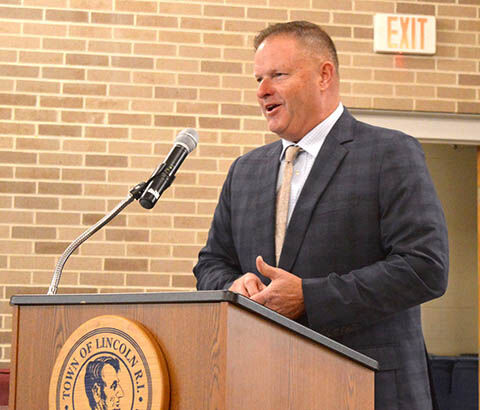 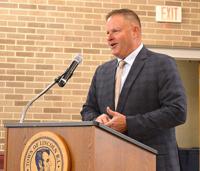 His new office is a short walk from his last one next door at the Lincoln Police Department headquarters. Gould offered his formal resignation as administrative captain last week before taking the oath of office as town administrator.

Police Chief and interim Town Administrator Brian Sullivan was the one to read the oath of office, calling it a “historic day” for the town.

The roles have reversed for the pair, as Gould has worked under Sullivan as police chief for several decades.

On a more serious note, Sullivan said he’s confident Gould will “do a great job as administrator, as you’ve done a great job for me as patrolman, sergeant, lieutenant and then captain. I know you’ll do a wonderful job for the town,” he said. “Best of luck to you, and you know I’m here for you.”

Sullivan said he would be “giving up one of his hats” after juggling multiple positions since Joseph Almond departed in March for Gov. Dan McKee’s administration.

After the oath was administered, Gould addressed attendees briefly, noting there is a more formal ceremony planned for tonight, Sept. 23, at Lincoln Middle School.

He thanked his wife and children for their support, as well as those who worked on his campaign and residents who supported him at the polls.

“There were certainly some late nights and long weekends, but it paid off,” he said.

Gould also thanked the department heads in attendance last Friday, saying it “meant a lot” for them to be there. Finally, he thanked Sullivan for administering the oath and for taking on extra work the past few months.

“I’m looking forward to getting in the trenches with all of you,” Gould said.

He told The Breeze that he’s “excited to hit the ground running,” and he’d been taking calls from soon-to-be constituents to hear about their concerns.

Sullivan did “a great job in a position where he had to wear two hats in the interim,” said Gould, but he’s ready to focus entirely on the town’s needs.

“I’ve already gotten to know a lot of the people working for the town. First, I want to get in there to really understand their roles and establish short and long-term goals,” he said.

Some of the more urgent needs to be addressed include coming up with a plan for federal COVID-19 relief funds and starting the physical education complex at Lincoln High School.

He also plans to work with the Town Council on addressing police staffing shortages.