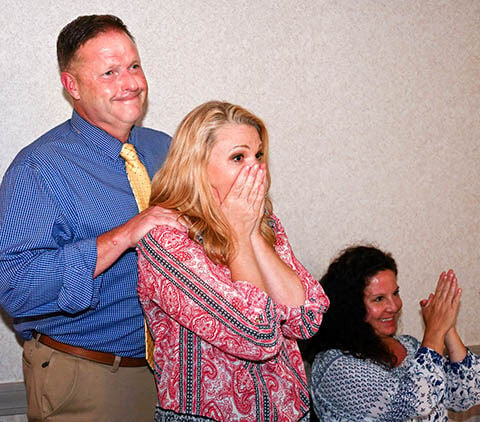 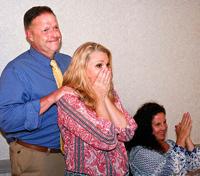 Phil Gould and his wife, Jill, react to voting totals as they were announced and tallied during a victory party at the Enrico Caruso Society in Manville on Tuesday night. (Breeze photos by Robert Emerson) 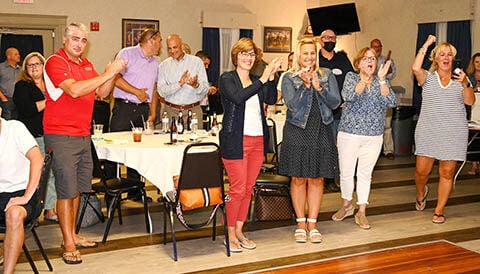 Gould supporters react to vote numbers as they are called out during an election night party at the Enrico Caruso Society in Manville on Tuesday night. 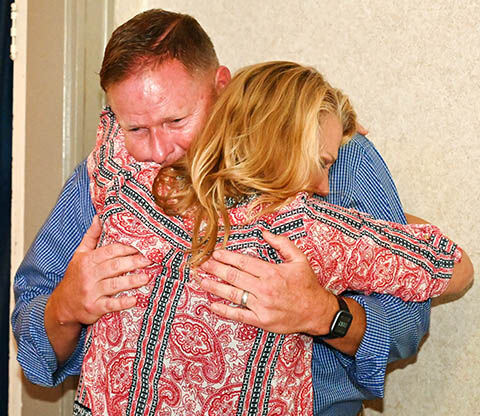 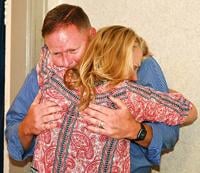 Tearful candidate Philip Gould hugs his wife, Jill, as his final winning tally of votes is announced and he realizes he will be the next town administrator for Lincoln.

Phil Gould and his wife, Jill, react to voting totals as they were announced and tallied during a victory party at the Enrico Caruso Society in Manville on Tuesday night. (Breeze photos by Robert Emerson)

Gould supporters react to vote numbers as they are called out during an election night party at the Enrico Caruso Society in Manville on Tuesday night.

Tearful candidate Philip Gould hugs his wife, Jill, as his final winning tally of votes is announced and he realizes he will be the next town administrator for Lincoln.

The results were not official as of press time, since mail ballots cast after 4 p.m. hadn’t yet been counted, but Gould was called the victor around 8 p.m. Tuesday when the results showed he had taken an overwhelming lead in the race.

Gould, who ran as an independent, earned 2,712 total votes, or 63.4 percent. His 2,712 total votes in preliminary totals exceeded the total combined votes of all five of his opponents by 1,145 votes, a margin that exceeded even some of the most optimistic forecasts from his team due to the presence of a sitting state senator, school board member, and former state representative in the race.

The unofficial results were announced by Town Clerk Lillian Silva at Town Hall before a few dozen eager residents on Tuesday evening. Paolino, Picozzi, Paolino and Cullen were among the crowd, though Cullen, wearing a tricorn hat, was the only candidate to stay until the final results were shared.

Across town, an emotional Gould celebrated his victory with his supporters at the Enrico Caruso Society in Manville. With his wife Jill and their two sons beside him, Gould said he was grateful for the community’s support.

Though the campaign was difficult at times, Gould said, he’s proud to have taken the high road and said he remains focused on making Lincoln a better place to live and work.

He said he'll dive directly into a budget season once he’s sworn in, which is expected to occur later this week or next. Police Chief Brian Sullivan, interim town administrator, said he’s looking forward to a smooth transition.

Gould told The Breeze he’s become fairly acclimated to the workings of town government through his involvement on several boards and committees over the years. Above all, he said he’s committed to “keeping the tax rate down and responsible spending.”

Upon taking office, he said he plans to start working on a community survey to assess priorities before making any changes.

“For a long time, a handful of people helped direct priorities. I think community input is important for directing priorities, whether it’s sidewalks, street improvements, parks, I want to know what residents are concerned about,” he said.

He’s also planning to review Lincoln’s comprehensive plan, which he said “hasn’t been touched since 2004,” taking a deeper look at the town’s existing housing stock and planning for the future.

Overall, Gould promised a more transparent and open Town Hall, with an actively engaged administration at the helm. He said he’d like to see town meetings streamed for the public, among other changes to make that happen.

Speaking on the race in general, he said he tried to focus on the issues, meeting residents and running on his own merits over bashing his five opponents.

“At some houses I’d spend 20 minutes talking about a certain issue,” he said. “I tried to always take the high road and run on my qualifications, experience and character. I think a lot of people understood that I was running a positive campaign.”

Gould was at the center of many of his opponents’ criticisms over the summer.

“I tried to focus on the right things. I got into this because I love the town,” he said, adding that Lincoln is succeeding in many ways. “I’m looking to make it even better,” he said.

Of 18,181 total registered voters in Lincoln, 4,280 participated in Tuesday’s special election. At least 2,712 voted for Gould.

The other five candidates were unable to take advantage of lower turnout than would be seen in a typical election. In the 2018 general election where former Town Administrator Joe Almond was unopposed, 8,178 votes were cast, nearly double Tuesday’s unofficial voter turnout.

“I’m a winner tonight. I still get to represent the great people of Lincoln and all of District 17,” he said.

Picozzi congratulated Gould and wished him luck in the position. He thanked his supporters, saying the campaign was “a great experience.”

“I will continue to focus on School Committee business and the physical education center,” he said.

“This is Phil’s night. I wish him congratulations and great success," he said.