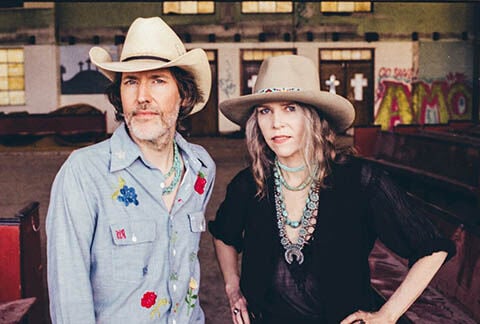 David Rawlings, originally from North Smithfield, and his partner, Gillian Welch, won the Grammy Award for Best Folk Album this year for “All the Good Times.” (Photo courtesy of Alysse Gafkjen) 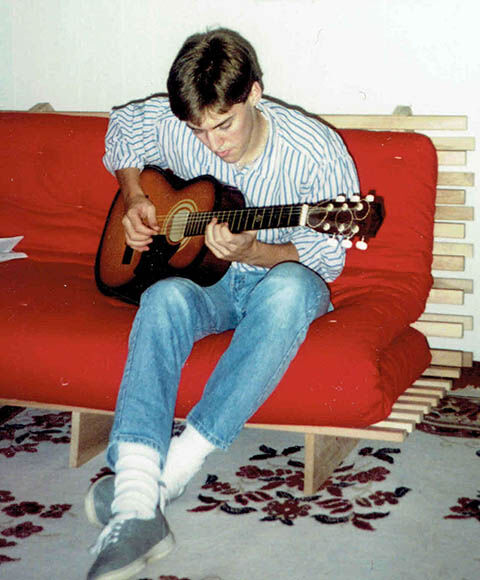 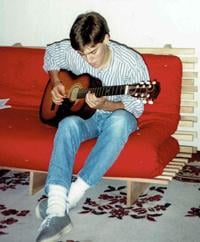 David Rawlings pictured at age 17 with his first guitar. 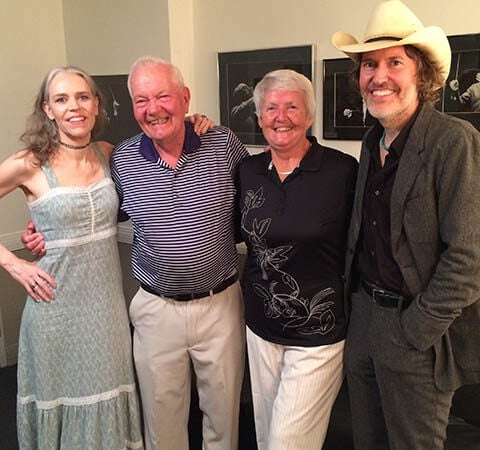 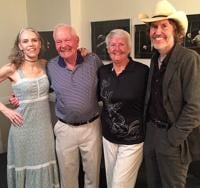 Pete and Linda Rawlings, center, pictured with their son, David, and his partner, Gillian Welch, backstage at the John F. Kennedy Center for the Performing Arts after a show in 2017.

David Rawlings, originally from North Smithfield, and his partner, Gillian Welch, won the Grammy Award for Best Folk Album this year for “All the Good Times.” (Photo courtesy of Alysse Gafkjen)

David Rawlings pictured at age 17 with his first guitar.

Pete and Linda Rawlings, center, pictured with their son, David, and his partner, Gillian Welch, backstage at the John F. Kennedy Center for the Performing Arts after a show in 2017.

NORTH SMITHFIELD – For David Rawlings and his partner, Gillian Welch, their roots in folk music run as strong and deep as the call of the open road.

The two have shared the stage with such musical greats as Emmylou Harris and Joan Baez and they often find themselves on the short list of featured collaborators with other musicians of their genre. Their style, which has alternately been described as country, bluegrass and Americana, won them a Grammy this year for “All the Good Times,” a collection of covers released in the midst of the pandemic last summer.

But for Rawlings, those roots started neither in the fields of the West nor the swamps of the Deep South, but in the suburbs of North Smithfield. The guitarist, singer and songwriter said that when he was growing up on Sunnycrest Avenue in the 1970s, there weren’t many country songs on the radio.

“Growing up in North Smithfield, just the childhood that I had, I wasn’t very connected to music as a career at all,” he told The Breeze during an interview last week. “I didn’t even understand that that was a possibility.”

One of his first exposures to folk music, he said, was listening to Bob Dylan with his dad. The family was staying at their house on Spring Lake one summer when his father called him in to listen to “Subterranean Homesick Blues.”

“I heard this and I thought it was cool, and basically I made a note that my dad liked Bob Dylan,” he said. “And everyone knows buying a gift for your father isn’t an easy thing.”

Rawlings purchased the Greatest Hits cassette for his father for a gift, but he was the one who ended up adding it to his collection.

He dabbled in music lessons and played saxophone in the Halliwell Memorial School band, but Rawlings said he didn’t think seriously about music until he was 16. One snowy day before Christmas, he was walking home from Firehouse Pizza with a friend, Glen Chausse (now his road manager down in Nashville), when Chausse suggested they enter the North Smithfield High School talent show.

“He said, ‘You should ask your parents to get you a guitar for Christmas.’ He said, ‘I’m going to ask my parents to get me a harmonica,’ and he wanted to sing the Neil Young song “Heart of Gold” at the talent show whenever that would be in the spring.”

Rawlings got the guitar, and a handful of Mel Bay lesson books to try and learn how to play it. When that didn’t work, he turned to his friend, Matt Silvia, whose father, Jerry, owner of Financial Management Services in Slatersville, ended up becoming his first guitar teacher.

“Sometimes at the end of the lesson, someone would be coming in to meet with him, and he’d say, ‘This is David, my guitar student.’ And he’d have me play one of these little pieces that I learned and I’d have to play them for the person. That was some of the first performance experience I had,” Rawlings recalled.

He played in a few bands during high school, including the NSHS jazz band, but his first paying gigs were with a country band called Silver Steel. He and his bandmates, including organizer Craig Webb, played shows around Rhode Island and Connecticut.

“I remembered the first time I went out and played with him, and at the end of the night I got paid $65. I thought, ‘I’ll never work again.’ It seemed like so much money,” he said.

Rawlings got a full scholarship to the University of Richmond and seemed set on a career with an English degree, but music called him back. After burning through the music department’s course catalogue in two semesters, he told his parents he wanted to transfer to Berklee College of Music up in Boston.

For Linda and Pete Rawlings, who still live on Sunnycrest Avenue in North Smithfield, that news came as a bit of a surprise.

“He came home at Thanksgiving and said to Pete, ‘I’ve got the application filled out to go to Berklee College of Music,’” Linda recalled during an interview at their home last week.

“I fell on the floor when he said that. Because I was thinking retirement,” Pete added.

For Linda and Pete, the transfer sparked a new era of musical performances and fellow music students coming in and out of their lives. Pete said they always loved to watch their son play, whether it was at clubs around Rhode Island and Massachusetts or on the dock at Spring Lake.

“He used to bring a lot of the students down here. I can remember Gillian standing right there when he introduced her to us for the first time,” he said, indicating a corner of his living room.

In the early ’90s, Rawlings and Welch joined a flood of young artists moving south to try to catch their big break in Nashville. The beginnings weren’t always glamorous – Rawlings recalled playing his guitar for two weeks on Broadway just to earn enough cash to make it home for his brother’s wedding – but by the late ’90s, they were getting Grammy nominations and landing touring gigs with some of their favorite artists. The albums – first with Welch’s name on the cover, then with both of their names – were often praised for their unique embrace of folk’s country roots.

Through the years, Rawlings has remained close to his North Smithfield roots and said he often runs into old connections in the music business. He and Welch purchased their own place on Spring Lake and sometimes host famous music artists on their way to the Newport Folk Festival.

In recent years, his local touring stops have included Lupo’s Heartbreak Hotel and the Columbus Theatre, whose style he said reminded him of the Stadium Theatre in Woonsocket.

“I had thought someday it would be fun to play the Stadium. I would always see that growing up,” he said.

For Linda and Pete, their family’s unique introduction to the music world is visible in the picture frames across their mantelpiece, where photos of the family backstage at the Grammy’s sit next to snapshots of the grandkids and a hand-painted landscape of Slatersville. Linda said the best part for them has been getting to meet so many different artists and go to so many events.

“I sit there and just are kind of in awe. You’re watching your kid. I love to sit kind of to the left of center stage, because he’s always on the left, and I love watching his hands,” she said.

In March, Linda and Pete were watching the livestream in North Smithfield when they learned their son and Welch had claimed the Grammy win for Best Folk Album. Rawlings was at his studio in Nashville, and Welch was working in the garden at their nearby home.

Though the pair hasn’t had much opportunity to tour recently – they spent most of 2020 repairing their studio after a tornado damaged it last March – Rawlings said he looks forward to getting back on the road. If his family and friends back in Rhode Island have their way, it won’t be long before that road leads him home for a visit to North Smithfield.

“I’m proud to have grown up there. It was a good place to grow up. And I definitely felt a lot of support,” he said.