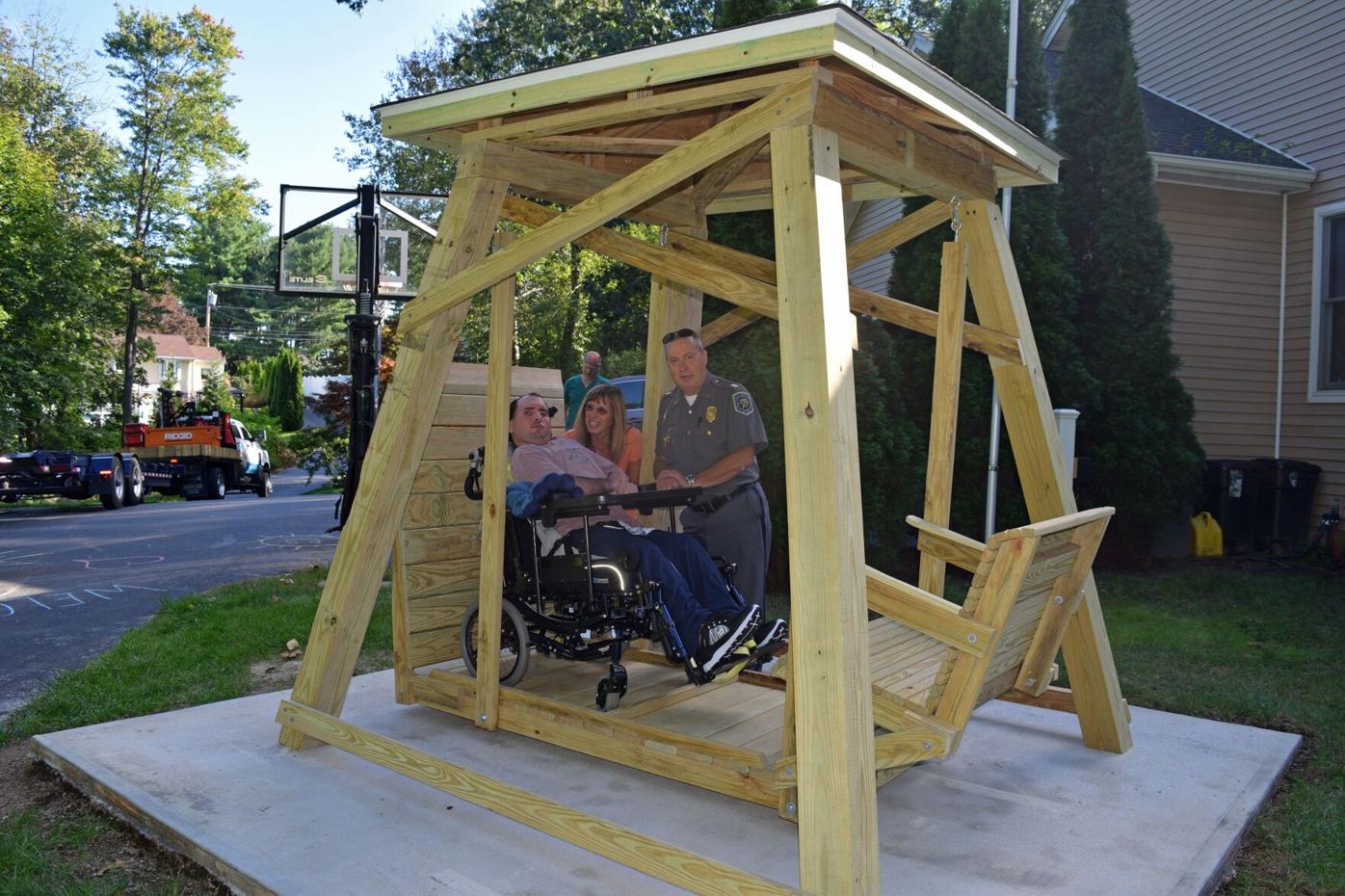 Seth Adams, with his parents Donna and John, enjoys his new swing. 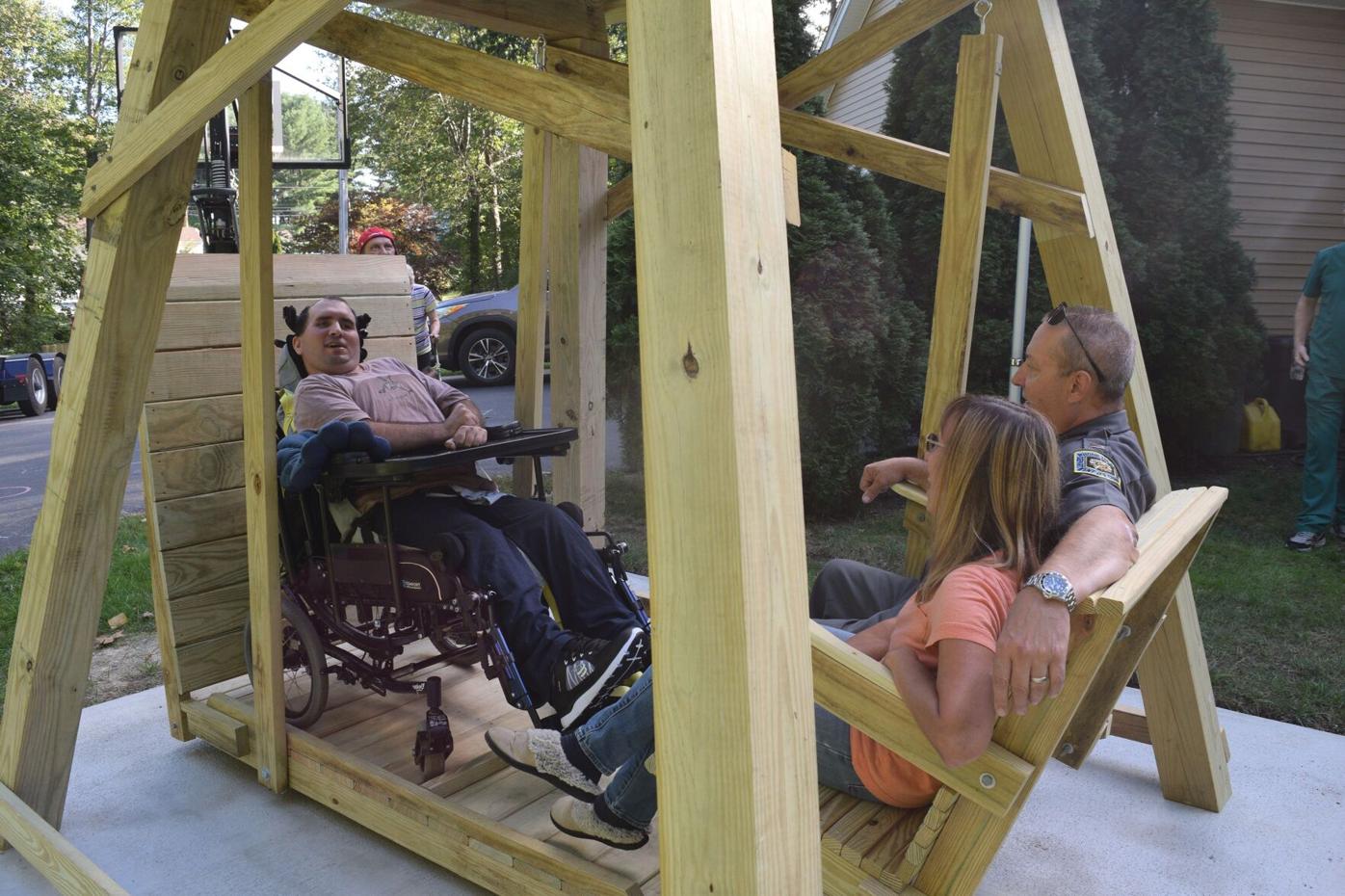 Seth Adams smiles as he swings in the backyard with his parents, thanks to a newly installed accessible swing.

Seth Adams, with his parents Donna and John, enjoys his new swing.

Seth Adams smiles as he swings in the backyard with his parents, thanks to a newly installed accessible swing.

LINCOLN — When the pandemic struck last March, the lives of Seth Adams and his family were upended again. They’ve come to expect the unexpected, but that didn’t make it much easier on the Lincoln family.

On March 29, 2004, “our lives changed beyond what we could ever imagine,” said Donna Adams, Seth’s mother. Her son, then 13 years old, had suffered a brain aneurysm.

Seth, the oldest of three, had been playing basketball outside his Lonsdale home when he complained of a severe headache. When Donna went to grab some aspirin for Seth, she heard him collapse.

Before first responders could arrive, Seth lost control of his speech and movement. He fell unconscious.

Seth was rushed to Hasbro Children’s Hospital in Providence. A few hours after he collapsed, he underwent his first emergency brain surgery.

Doctors told Donna and Seth’s father John that their son’s brain had hemorrhaged due to an arteriovenous malformation (AVM), which occurs when a group of blood vessels form incorrectly in the body.

The aneurysm came without warning, and Seth was left totally disabled. He has undergone multiple surgeries, including one to remove half of his right parietal lobe. He survived the complicated procedure, but was in a coma for two months.

His parents never left his side, and community rallied behind Seth, Donna, John, and Seth’s sisters, Judy and Tara.

Roughly four months after he was first hospitalized, Seth began rehabilitation at Spaulding Medical. Though they were urged to “institutionalize” their son, the family instead painstakingly renovated their home to be wheelchair accessible.

Seth, now 31, still receives weekly therapy. Though he is nonverbal, Donna said Seth is able to understand. He still smiles, cries and laughs.

“Through the years, we needed to make sure all of Seth’s needs were met,” she said. “We brought in specialized equipment to keep him comfortable and to do the best we can to care for him.”

When COVID hit, Donna said their lives changed again. Seth could no longer go out into the community or attend his day program, and the family was desperate for anything to keep him happy at home.

Donna said she’s grateful to Baystate Outdoor Personia, of Bellingham, Mass., which agreed to build Seth a handicap accessible gliding swing. The swing will allow Seth to roll onto it with his wheelchair and swing across from someone else.

The company agreed to donate all time and labor to build the structure at the family’s home. In addition, J.W. Construction laid the cement base for the swing.

Having cared for Seth for 17 years “with great support from family, friends and Bayada Home Care,” Donna said, the Adams family continues to progress forward.

Donna said she is happy to swing in the backyard with Seth, making new memories with her son.