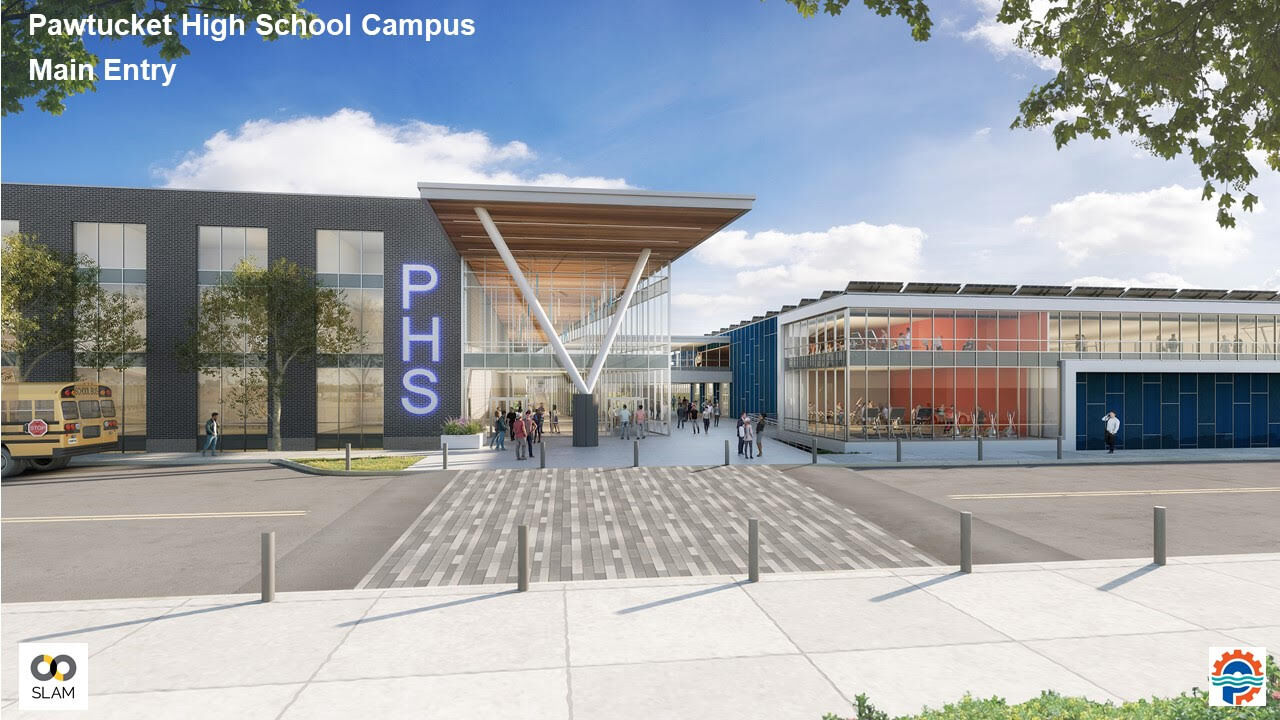 A rendering shows the conceptual front entry for a combined Pawtucket High School at the McCoy Stadium site. 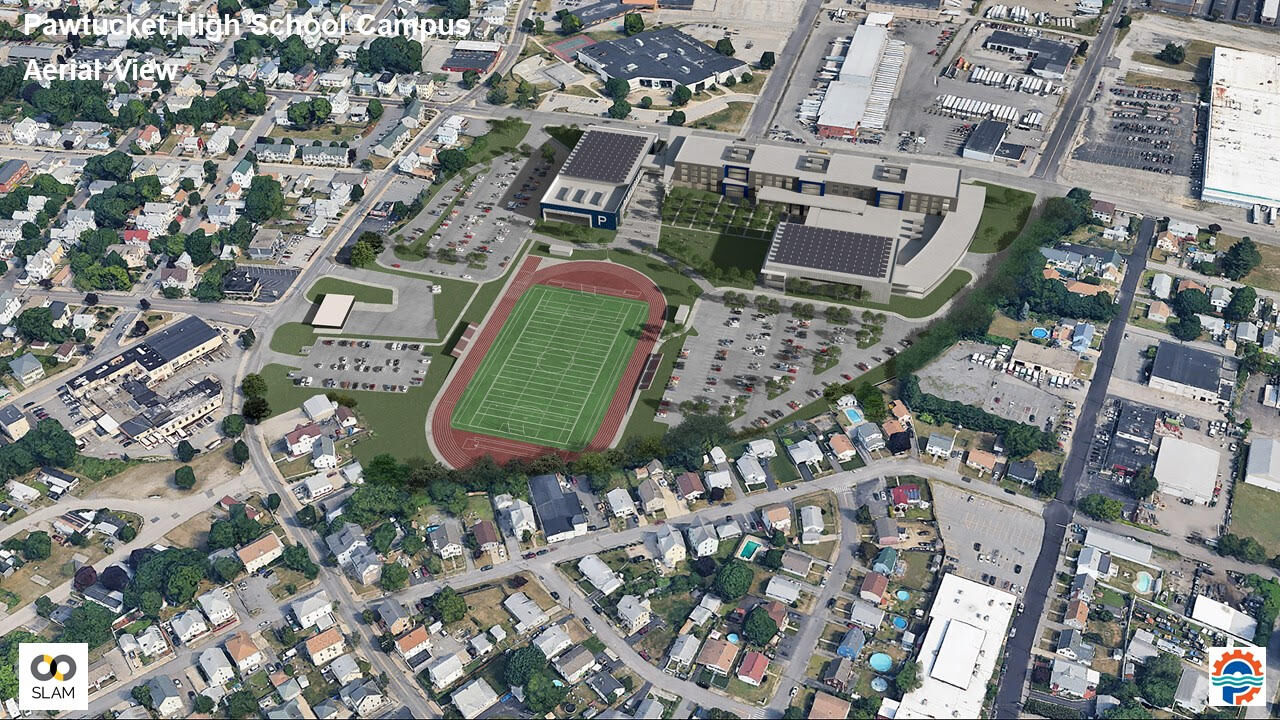 An rendering of what the future Pawtucket High School could look like from the air.

A rendering shows the conceptual front entry for a combined Pawtucket High School at the McCoy Stadium site.

An rendering of what the future Pawtucket High School could look like from the air.

PAWTUCKET – News last week of a likely movement toward a combined high school drew a mix of reactions from Pawtucket residents, many seeming to like the idea of creating a state-of-the-art facility at the site of the vacant McCoy Stadium.

The Breeze was first to report last Friday that the Ad Hoc Subcommittee to Study High School Academic Complex had voted unanimously to recommend that the Pawtucket School Committee move forward with the concept of a new state-of-the-art Pawtucket High School campus, including fully integrated career technical education pathway spaces.

Meeting over four months and eight meetings, members of the committee assessed and developed the concept with school facilities consultant Colliers International and SLAM architects. Members voted last Thursday to recommend a 482,500-square-foot campus concept that would accommodate 2,500 students at an estimated cost of $302,507,500. For those experiencing sticker shock, 83 percent of that would be reimbursed by the state, which means local taxpayers would pay about $50 million. Shea High School and Tolman High School would then presumably be redeveloped, recouping some of that money.

Some on social media highlighted the impact of physical surroundings inspiring students to do well and stay motivated, with others highlighting the impact of such a facility on future generations.

More unconventional responses to the news included a call to open up the Bucklin Brook, which runs underground at the site, and to create a high school baseball field at the site that’s a replica of McCoy.

Some people from outside the city also criticized the plan, saying they didn’t like the idea of state taxpayers footing most of the bill while children in other communities continue to attend older schools. Some residents also questioned the idea of erasing history, including at McCoy Stadium, and the longstanding identities of the two rival high schools.

Advocates highlight the fact that many Rhode Islanders are accustomed to the idea of old, poorly lit high schools, and can’t quite envision what a state-of-the-art modern facility is like. Part of the reason for that is that so few new schools have been built in the state over the years, they say.

The first new high school built in Pawtucket in more than 75 years, the concept is being compared to the recently-built new East Providence High School, a college-like campus that school leaders point to as the model for the future.

“The concept for a new, state-of-the-art Pawtucket High School and integrated CTE campus that has been developed by the ad hoc subcommittee is an inspiring opportunity to invest in our city’s students for decades to come,” said Mayor Donald Grebien in a statement. “Our students deserve a modern, 21st century learning environment that prepares them for success, and I am confident that is exactly what this concept will do. This project would take advantage of a city-owned asset, turning the now sadly vacant McCoy Stadium site into a vibrant campus for learning, career exploration, athletics, and community activities. This project is a priority for my administration and I thank the members of the ad hoc subcommittee for their work vetting and developing the concept to this point.”

“The diverse members of the ad hoc subcommittee came together starting in September to explore if a new Pawtucket High School and CTE campus was a feasible, desirable, and affordable possibility in terms of student learning, the city’s bonding capacity, and Rhode Island Department of Education school construction reimbursement policies,” said subcommittee Chairman Jay Charbonneau. “I am pleased to say that the concept that has been developed and unanimously recommended by the subcommittee is a bold vision for the type of 21st century learning environment that our students deserve. The Pawtucket High School campus concept would be the most modern high school learning environment in the state, with room for exciting new CTE career pathways, state-of-the-art classrooms, arts and performances spaces, athletics fields, and shared community spaces. I will be presenting the recommendation of the subcommittee and the new Pawtucket High School campus concept to the full School Committee in the coming weeks for further review and public input.”

“As the City Council’s representative on the ad hoc subcommittee, and as the councilman for Ward 3 where this project would be located, I am excited about the Pawtucket High School and CTE campus concept that has been developed over the past 4 months,” said Councilor Terry Mercer. “A new Pawtucket High School campus at the former McCoy Stadium would breathe new life into the area while providing our students with the 21st century learning environment they deserve. The subcommittee has looked extensively into the concept’s educational and financial feasibility, and we collectively agree that this is a project the School Committee should seriously consider. Over the coming weeks, my council colleagues and I will also continue our work to ensure that Pawtucket has the bonding capacity to move forward on this and other critical Pawtucket school facility modernization projects. We are already a state leader in the thoughtful and prudent modernization of our school buildings, and a new Pawtucket High School and CTE campus has the opportunity to be a shining example of our commitment to future generations of Pawtucket students. Finally, I want to thank all of the members of the subcommittee for working together collaboratively to develop this exciting concept.”

The City Council recently learned that Pawtucket has the bonding capacity to be able to borrow money for the new high school. Some money for the project would come from previously approved borrowing for rehabilitation of Tolman and Shea.

A new building will not make a difference with education. It is all about the people inside the building and if we do not hold the people inside accountable to achieve better test scores then we just be wasting money on a new building. We are also losing a business opportunity with the McCoy land that will decrease tax revenues and business opportunities.