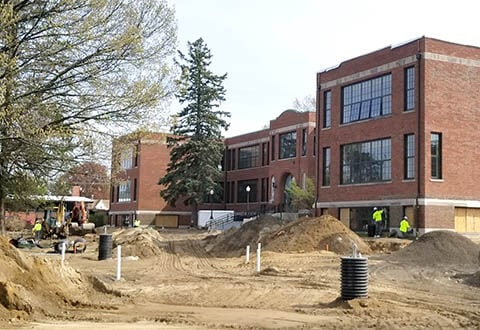 Work to create a new bus drop zone at the front of Nathanael Greene Elementary is ongoing as part of the renovations happening at the school. (Breeze photos by Ethan Shorey) 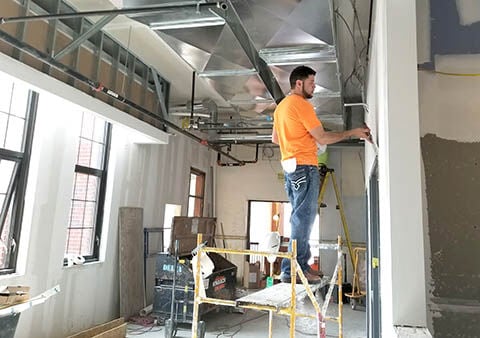 Worker Rogelio Cortes plasters a wall on the inside of Nathanael Greene Elementary School, which is receiving a full-scale renovation.

Work to create a new bus drop zone at the front of Nathanael Greene Elementary is ongoing as part of the renovations happening at the school. (Breeze photos by Ethan Shorey)

Worker Rogelio Cortes plasters a wall on the inside of Nathanael Greene Elementary School, which is receiving a full-scale renovation.

PAWTUCKET – The major rehabilitation of Nathanael Greene Elementary School on Smithfield Avenue is set to be substantially completed by June 30, on schedule for a move-in by late August, according to representatives on the project.

During a walk-through Monday, Project Executive Derek Osterman, of owner’s project management company Colliers, said the $16 million project is moving along well, with few hiccups. Nearly all of the structural work, including new steel beams and reframed roof, has been completed.

The new Nathanael Greene mixes state-of-the-art amenities with restored woodwork within the school first built in 1916. Three classrooms on the main level of the 65,000-square-foot school have been opened up to create a library and media common, exposing a stage with theater lighting on its way. The common area will restore the space similar to the way it was likely intended when the school was built, said Osterman.

“This will be a nice feature space,” he said.

The library and community area will still have dividing walls that can be put up if needed.

In keeping with one of the most popular upgrades at the new Potter-Burns Elementary School, completed last year, Nathanael Greene now has the same bright and operable windows, said Osterman.

All systems within the school are being replaced, from electrical to plumbing, added Osterman.

Frank Gionfrido, construction representative with Colliers, said the “daylight harvesting” light system in the school will adjust for sunny days, dimming and brightening lights automatically as needed. The “super high tech” HVAC system monitors for CO2 levels and can increase the air exchange in a room if levels get too high. This helps keep students awake and creates a better learning environment, he said.

The school is getting somewhat of an internal reconfiguration, with new common areas created to go with blocks of three classrooms.

“This is another school off my list,” he said.

A new elevator is also being installed within the next four weeks, making the school entirely accessible to the handicapped, said Gionfrido. Osterman said a new bus drop currently being constructed out in front of the school will fill in an open and under-used front yard and move buses off Smithfield Avenue, improving traffic flow.

Pawtucket voters approved a $32 million school improvement bond in 2014, and both Potter-Burns and Nathanael Greene are being done with money from that bond. Greene students are temporarily being housed at the Annex on Central Avenue for the 2017-2018 school year.

The contractor on the Greene project is TRAC Builders, and the architect is Torrado Architects.