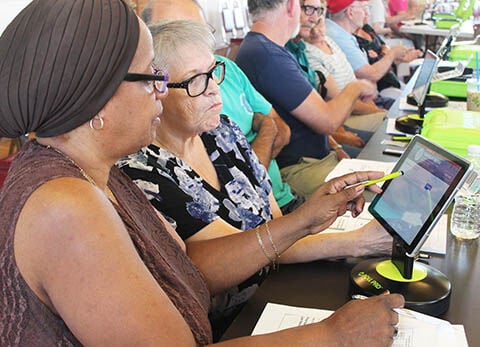 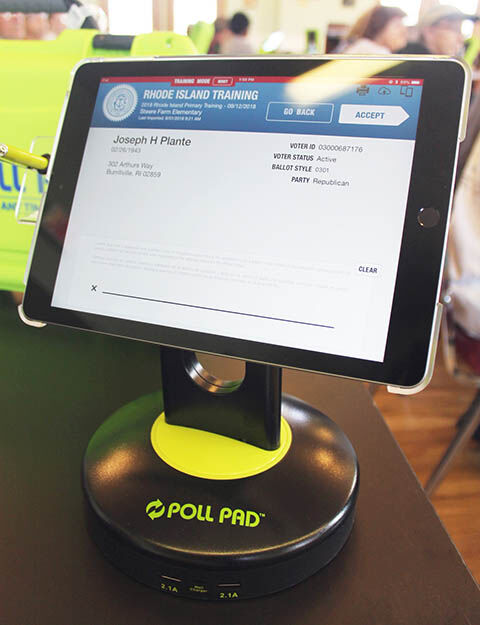 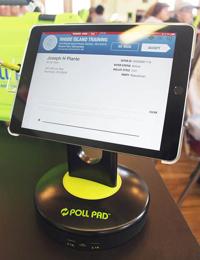 A Poll Pad displays a voter profile during a training. The electronic poll devices, designed to streamline the voter check-in process, were first piloted in select Rhode Island municipalities in 2016 and will be used statewide for the first time in next week’s primary elections.

A Poll Pad displays a voter profile during a training. The electronic poll devices, designed to streamline the voter check-in process, were first piloted in select Rhode Island municipalities in 2016 and will be used statewide for the first time in next week’s primary elections.

WOONSOCKET – Voters in precincts across the state may notice something new when they visit their polling locations to vote in next week’s primary elections.

Instead of long, alphabetized lists of registered voters, poll workers will now use digital tablets that can pull up a voter’s information and confirm receipt of a ballot with a simple scan of a photo ID. The technology, called a Poll Pad, was first piloted in select precincts in Rhode Island in 2016 and will be implemented statewide for the first time next week.

Poll workers tested out the new system during a training class held at Woonsocket City Hall Aug. 23. As Amy Farrell, a trainer with the Rhode Island Board of Elections, points out, the technology eliminates the need for paper poll books along with much of the human error that can come along with the manual check-in process.

“Gone are the days of paper books when we flip through stickers (and) have to guess name spellings,” she tells a room full of about 50 poll workers. “Those days are gone. We’ve now moved into the 21st century.”

On the tables are about 25 lime green plastic cases with the words “Poll Pad” printed across the front. Each box contains a specially outfitted Apple iPad along with a stand, card scanning tray and backup power cable. The Poll Pads, Farrell explains, are linked through a cellular connection with every device in the state and, once powered up, display a running count of the number of registered voters who have checked in in the precinct and statewide.

After leading the group through the assembly of the Poll Pads’ upright stands, a slightly technical process proving to be the most difficult task of the day, she instructs workers to scan a test ID. Workers place the ID in a plastic tray attached to the back of the tablet, being careful to align the ID’s barcode with the scanner. The devices around the room emit small chirps not unlike what you hear at a grocery store checkout lane as they read the IDs and pull up a voter profile for Joseph Plante, the Burrillville resident the class has chosen for training purposes.

According to Farrell, the process gives more control to the voter, who must sign off on the information on the touch screen along with both of the supervisors sitting at the check-in table. The voter then receives a paper ballot and proceeds to the polling booth as usual.

It’s not the first time the Poll Pads will be used in Woonsocket. They first appeared in July during a special referendum to determine whether the city would return to an elected School Committee. According to Estelle Corriveau, manager of the city’s Board of Canvassers, the new technology sped up the check-in process, moving voters along more quickly than the previous pen-and-poll-book system.

“I think it went quicker. It went faster once they learned how to do it,” she said, referring to poll workers. “Most of them thought it was easier and much better, it’s just getting used to it.”

In North Smithfield, voters had their first experience with the Poll Pads in 2016 when the town was one of several municipalities to pilot the system. According to Town Clerk Debra Todd, the devices were popular with voters and cut down on paperwork for staff, though one longtime poll worker chose not to return rather than learn the new technology. In particular, she anticipates the Poll Pads will cut down on the long and sometimes uneven wait times that can occur at check-in tables organized by first letter of last name during general elections, as each Poll Pad has access to a database of all voters.

“We used to have three lines and this doesn’t require that. You just go to the available supervisor,” she said.

According to the Rhode Island Secretary of State’s Office, the state first began the process of implementing electronic poll books in 2015 at the recommendation of the Presidential Commission on Election Administration, a federal commission formed in 2013 to identify best voting practices. A state review team looked at proposals from several companies before choosing KNOWiNK, the Missouri-based company that manufactures the Poll Pads. The technology was then piloted in 59 polling locations in Rhode Island in the September 2016 primaries and another 20 locations in the 2016 general election and has since been used in 36 of the state’s 39 municipalities.

According to KNOWiNK’s website, the company is the nation’s leading provider of electronic poll technology. Poll Pads are currently used in 25 states and the District of Columbia.