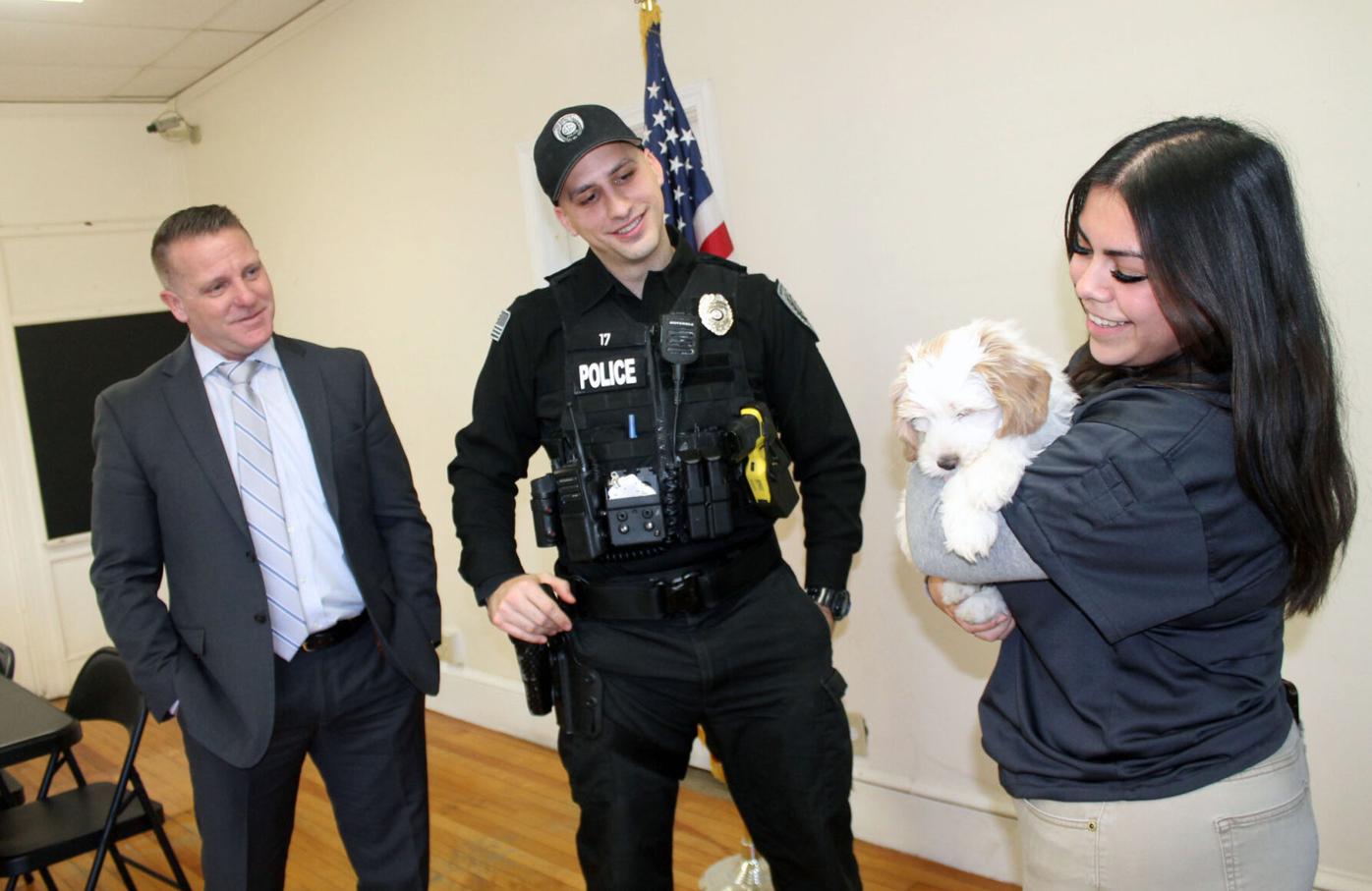 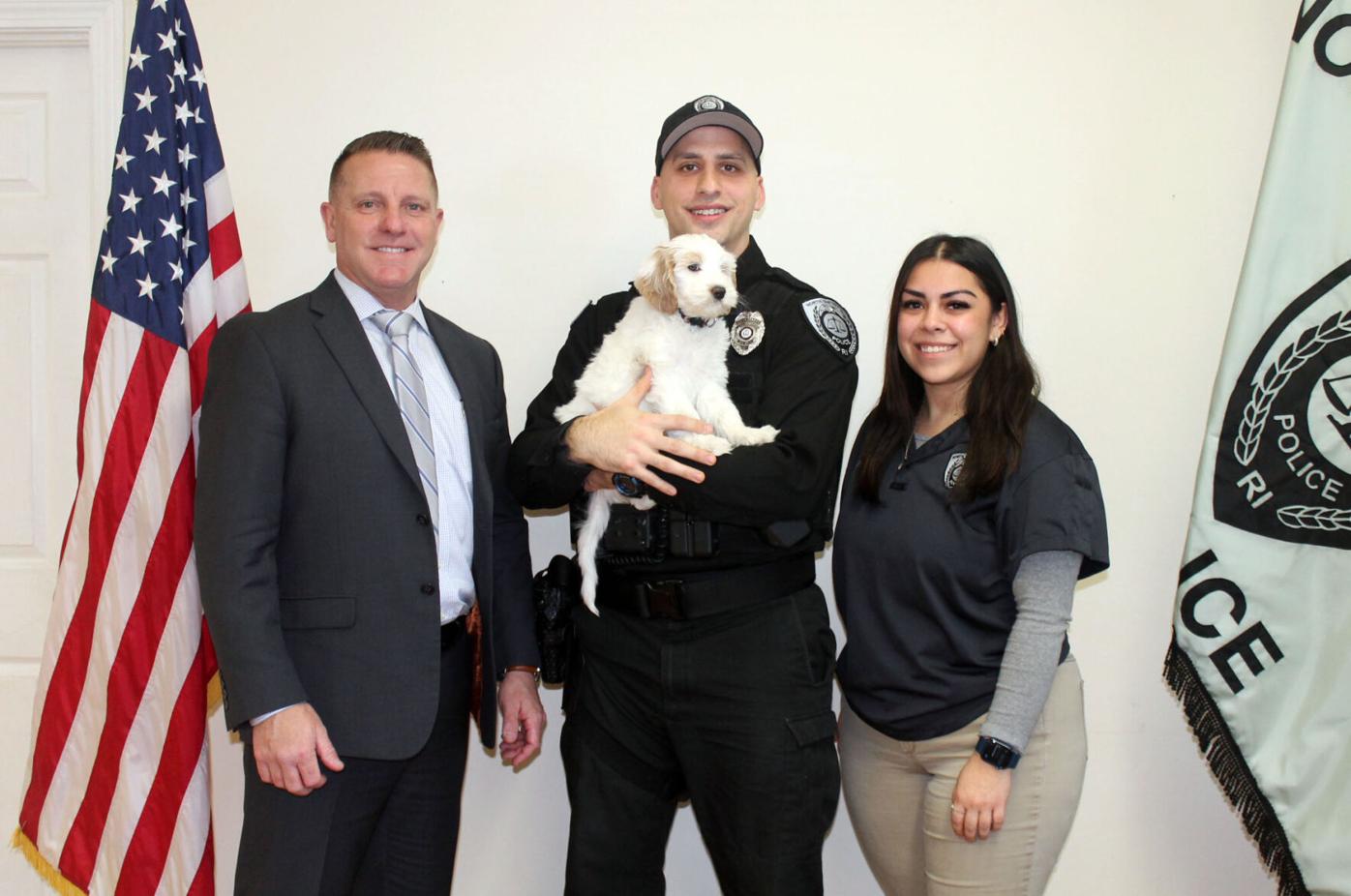 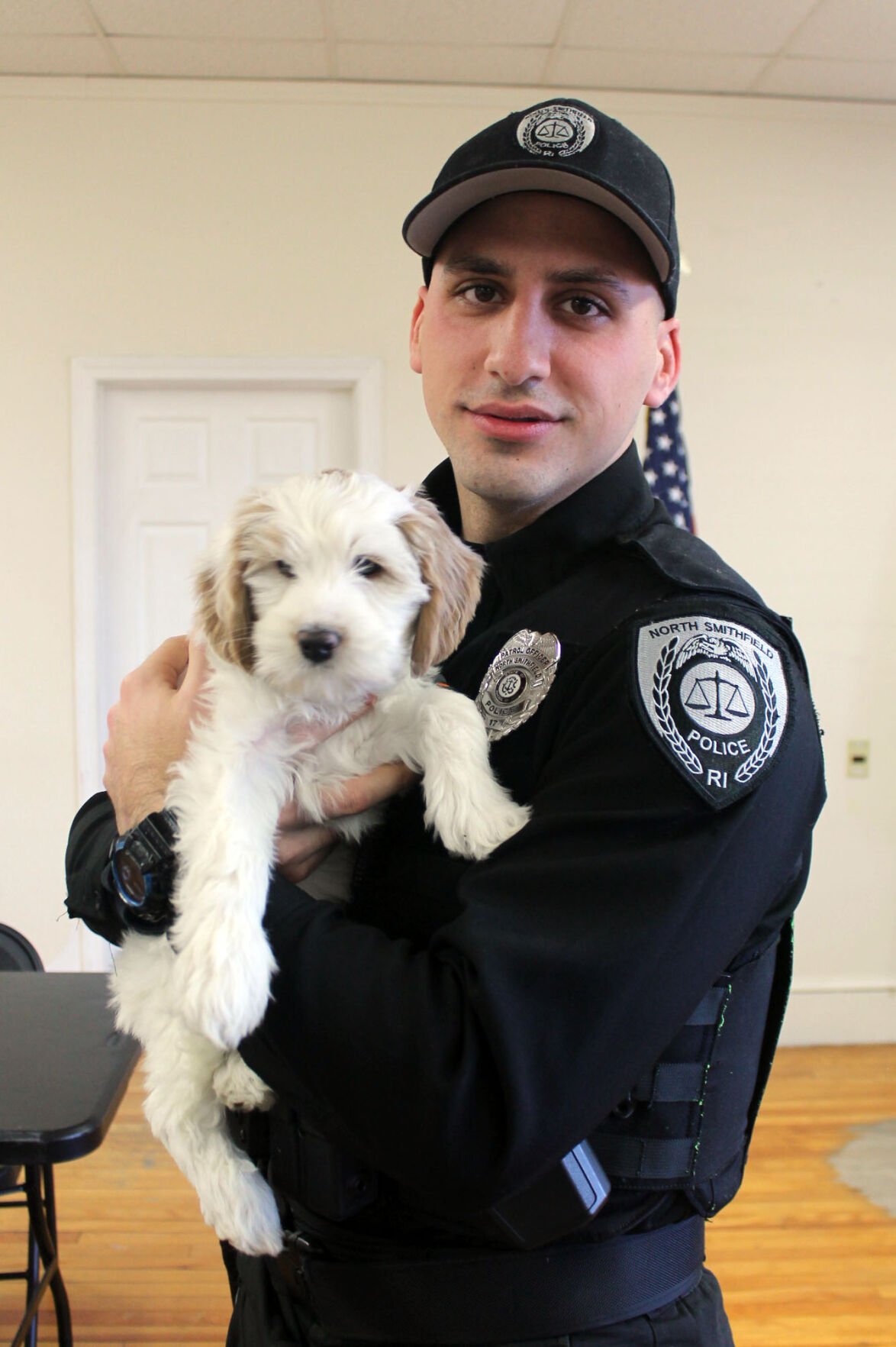 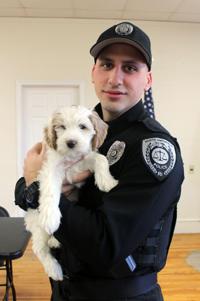 That’s because Liberty—Libby for short—is a nine-week-old Australian Labradoodle, and as the department’s new therapy dog, it’s her job to keep everyone around her calm and happy, a role she’s already proven herself in during her first week with the NSPD.

Libby officially joined the department last Monday, Dec. 27. Born in North Smithfield, Libby was chosen from among a litter of Australian Labradoodles for her mild demeanor and potential as a good therapy dog.

“We knew she’d be cute, but the trainer saw qualities in Libby for a better therapy dog,” said Lt. Gregory Landry, the new puppy’s co-handler along with Patrol Officer Nick Tomasetti.

Libby joins the department after a months-long fundraising effort spearheaded by Landry, Tomasetti and Dispatcher Valerie Orellana. The group raised close to $11,000 from community donations and events to support the purchase and training of a new puppy.

The program builds off the success of therapy dogs in other departments, including in Cranston, where Tomasetti said they had a chance to meet Cali, Cranston PD’s therapy dog, before launching their own effort. Police therapy dogs often work with child victims or build relationships in the community by visiting schools and attending events.

“Once she gets her training and better exposure, that’s when we can say, let’s take her to this school today or that school today,” Tomasetti said.

Landry said the effort is part of a larger shift, often led by younger employees such as Tomasetti and Orellana, to incorporate more community policing methods than were common when he joined the force 20 years ago.

“This is a way different form of policing than when I first started. Chief Lafferty has really allowed them to progress and take policing to an entirely new level,” he said.

For now, Libby attends class twice a week with Landry and Tomasetti at Courtesy Canine in South Kingstown. Her favorite activities including running, playing and chewing on everything in sight, something they hope she’ll grow out of around six months old. When she’s at the department, she spends time with the different officers, and has already built up a reputation as a favorite companion.

“Last week when she was here, she was caught sleeping under one of the detective’s desks for an hour,” Landry said.

Therapy dogs differ from traditional K9s in that their role is more about building relationships than performing specific police tasks. Tomasetti said they hope to partner with different organizations around town, and encouraged those interested in working with a therapy dog to reach out. When choosing her name, he said, they spoke with a speech pathologist to make sure it was easy for anyone to pronounce, including children with speech impediments.

While she’s still learning how to behave in public, Orellana said Libby’s effect has already been clear around the department.

“I think she helps a lot of the guys out here, too. They see a lot of stuff. They need to smile too,” she said.

This dog is completely adorable and she will be an asset to the department, but really let’s not confuse this with community policing. I would like to see officers assigned by shift to communities within the town, so that the officers get to know the residents and their families and vice versa. It would be wonderful to have a reciprocal relationship with the people that protect and serve.