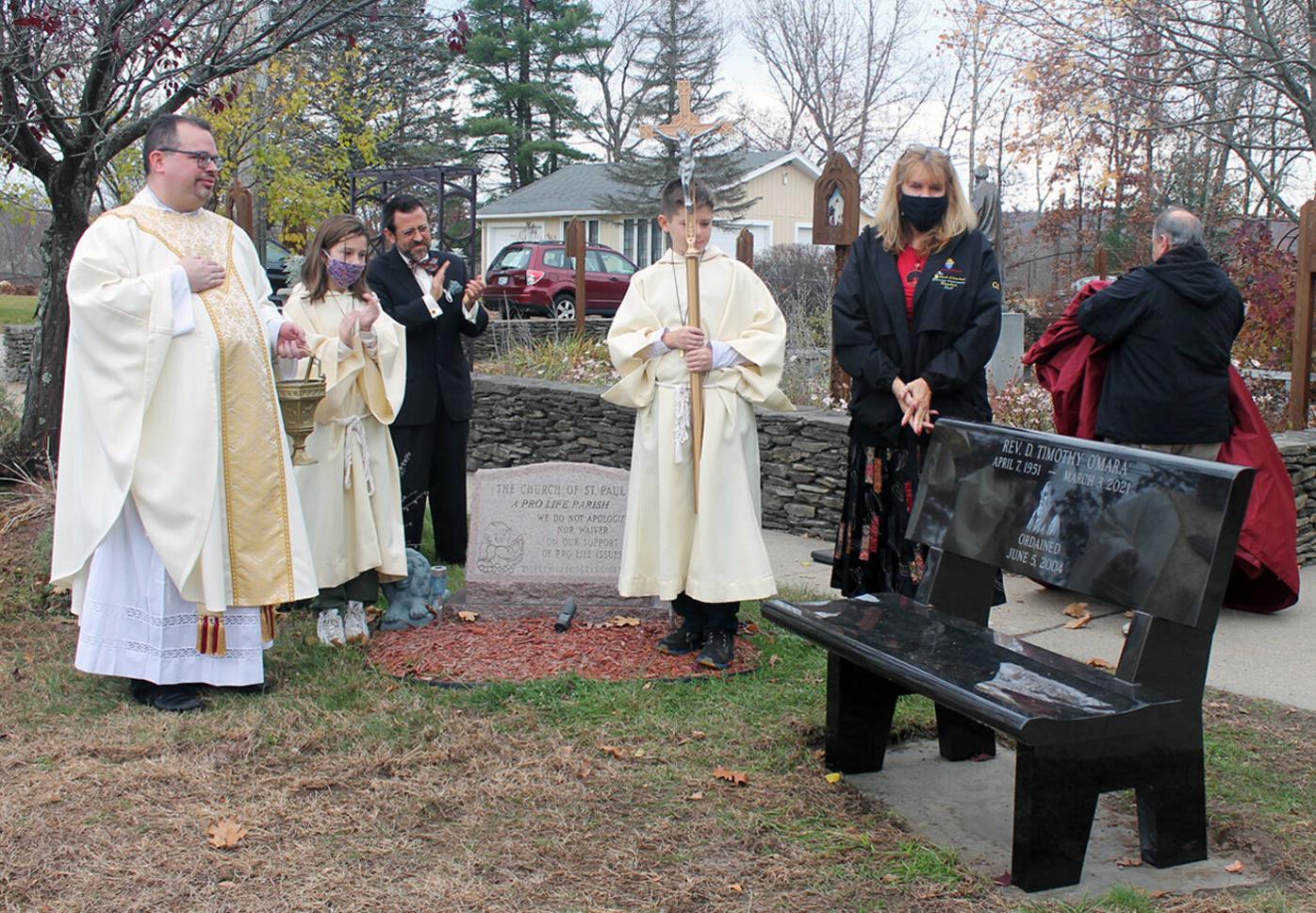 The Rev. John Larochelle, left, associate pastor, prepares to bless a bench dedicated in honor of the late Rev. Dennis Timothy O’Mara at St. Paul Church in Blackstone on Sunday. 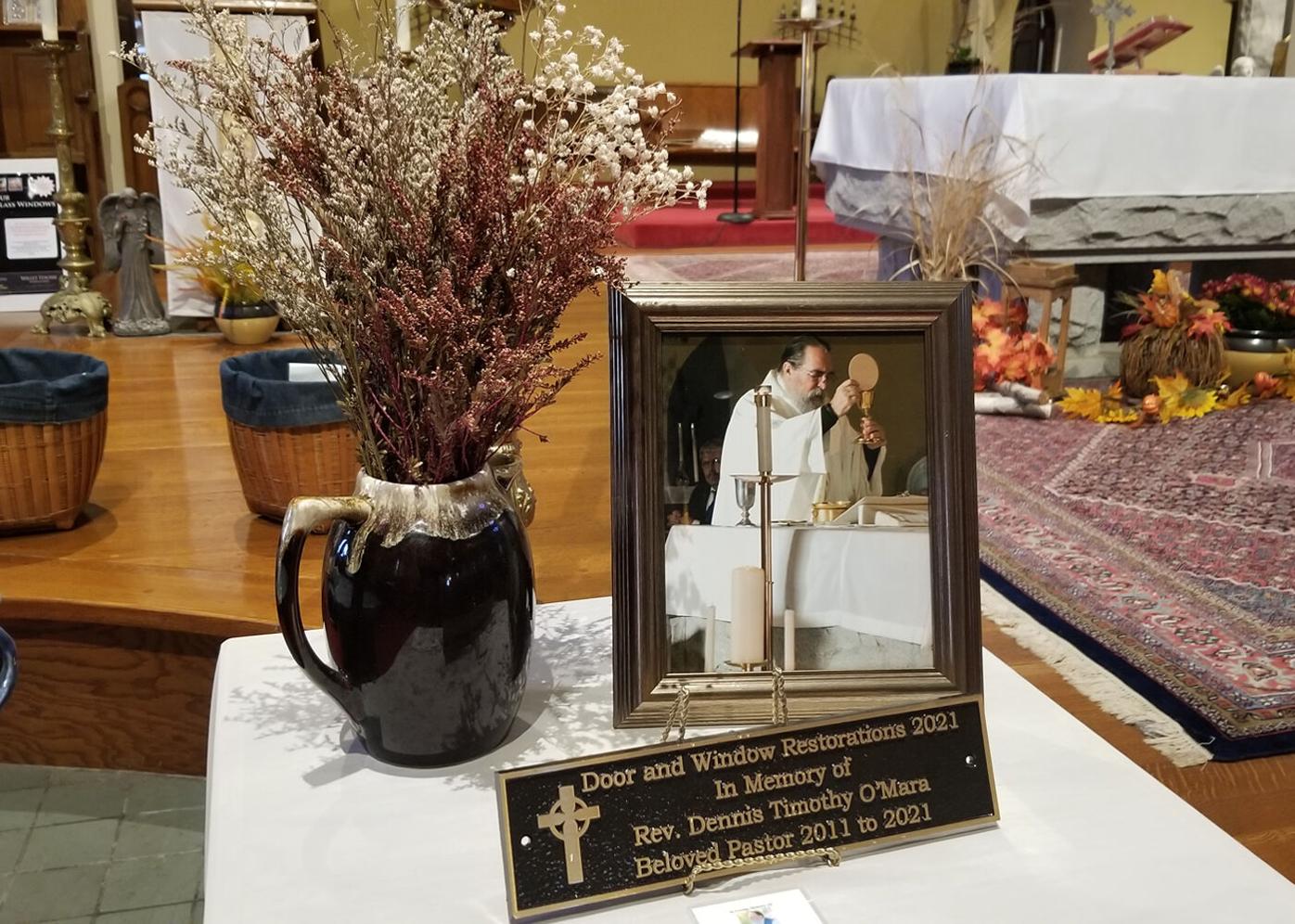 A plaque in memory of the late Rev. Dennis Timothy O’Mara will be installed near the front of St. Paul Church in Blackstone.

The Rev. John Larochelle, left, associate pastor, prepares to bless a bench dedicated in honor of the late Rev. Dennis Timothy O’Mara at St. Paul Church in Blackstone on Sunday.

A plaque in memory of the late Rev. Dennis Timothy O’Mara will be installed near the front of St. Paul Church in Blackstone.

O’Mara died suddenly in March after serving the St. Paul Street church for the past 10 years. Parishioners remembered him as a business-minded pastor with a talent for taking on large projects and seeing them through to completion.

A few months before his death, O’Mara had spearheaded the restoration of the building’s aging stained-glass windows. As MaryAnn DeRestie, parish business manager, recalled during a ceremony following the 8:30 a.m. Mass this past Sunday, Nov. 21, O’Mara put the matter to a vote and asked parishioners whether they wanted to pursue a partial or full restoration. St. Paul’s will soon celebrate its 170th anniversary, and many of the windows were beginning to buckle with age.

Parishioners voted for a full restoration, and fundraising began. In addition to pledges and a grant, the parish raised more than $35,000 through the “Twice Treasured” thrift shop that opened in February in the parish center. Sheila Landry, who runs the thrift shop, said the space has expanded significantly over the past nine months.

“That money was what put us over the top,” DeRestie said.

Altogether, parishioners raised about $90,000 for the project. On March 1, representatives of Willet Hauser Architectural Glass came to take the damaged windows back to their studio in Minnesota. On March 3, O’Mara died at Landmark Medical Center.

“Fr. O’Mara used to always say, ‘I want to leave this place better than I found it.’ I wish he hadn’t left, but I think we can all agree he left it better than he found it,” DeRestie said.

On Sunday, parishioners celebrated their former pastor’s memory by dedicating the windows after they were reinstalled last week. The Rev. John Larochelle, associate pastor, blessed a plaque that will be installed near the front doors of the church. Following the ceremony, parishioners proceeded outside, where they dedicated a bench to O’Mara’s memory in a spot near the parish garden where DeRestie said the former pastor liked to sit and watch the sunset.

O’Mara arrived at St. Paul’s in 2011 after serving in parishes in Leominster and Westborough, Mass. The former pastor had a career as a businessman before becoming a priest, and DeRestie said he put his experience to good use assisting the parish. Over the course of his time at St. Paul’s, she said, he helped the church reduce its debt and oversaw $500,000 in capital improvements.

“When it came to major renovations, he refused to take out another loan through the diocese,” she said.

With the stained-glass restoration complete, parishioners are turning their attention to new projects, including repairs to the parish center and the replacement of a steam pipe in the church’s sanctuary. Landry said the thrift shop will continue to support other projects at the church.