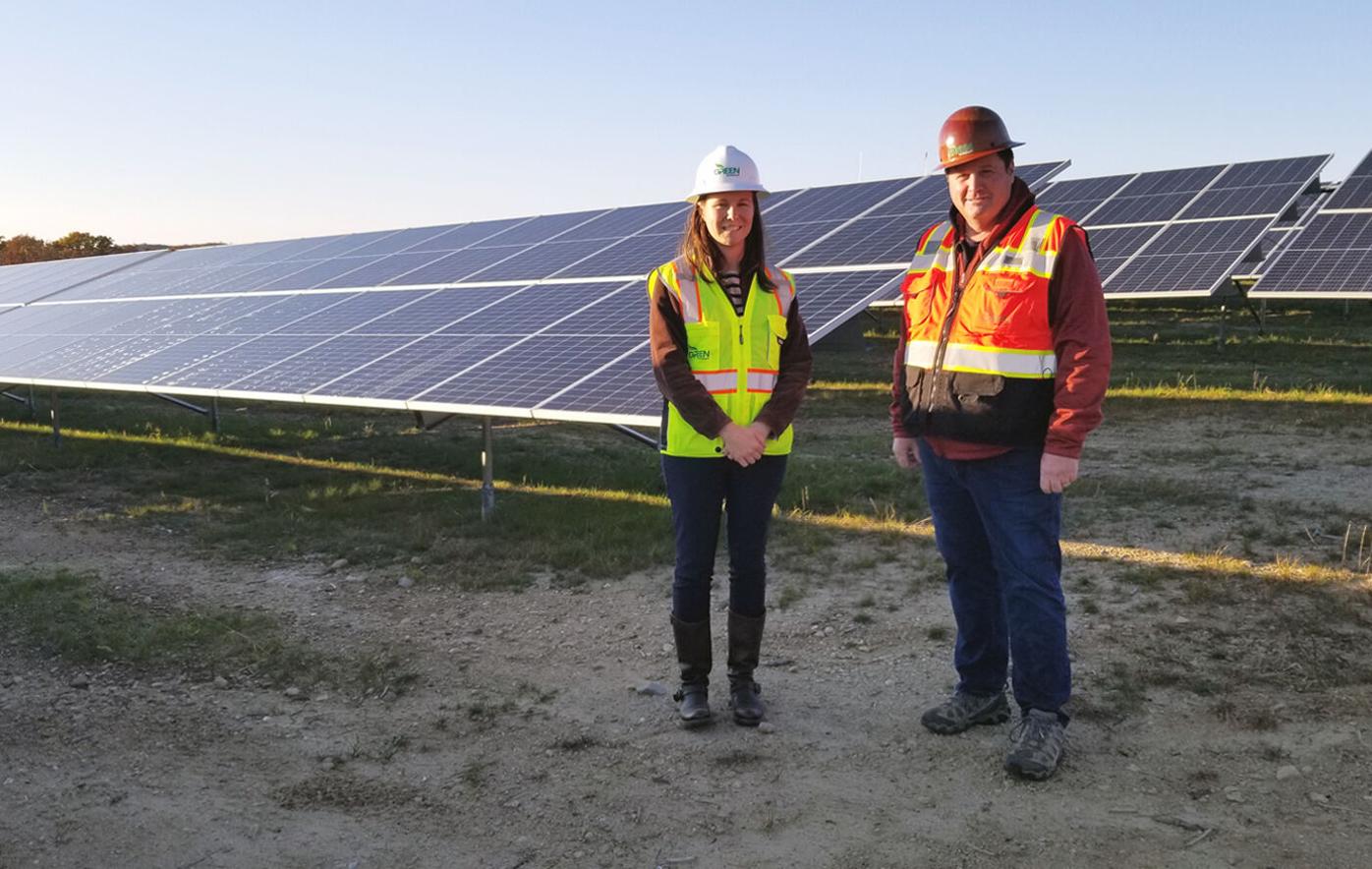 Hannah Morini, director of business development for Green Development, and Mark DePasquale, the company’s chairman and founder, stand next to a solar panel at the new, 38.4-megawatt solar farm off Iron Mine Hill Road in North Smithfield. The project is expected to go online next month. 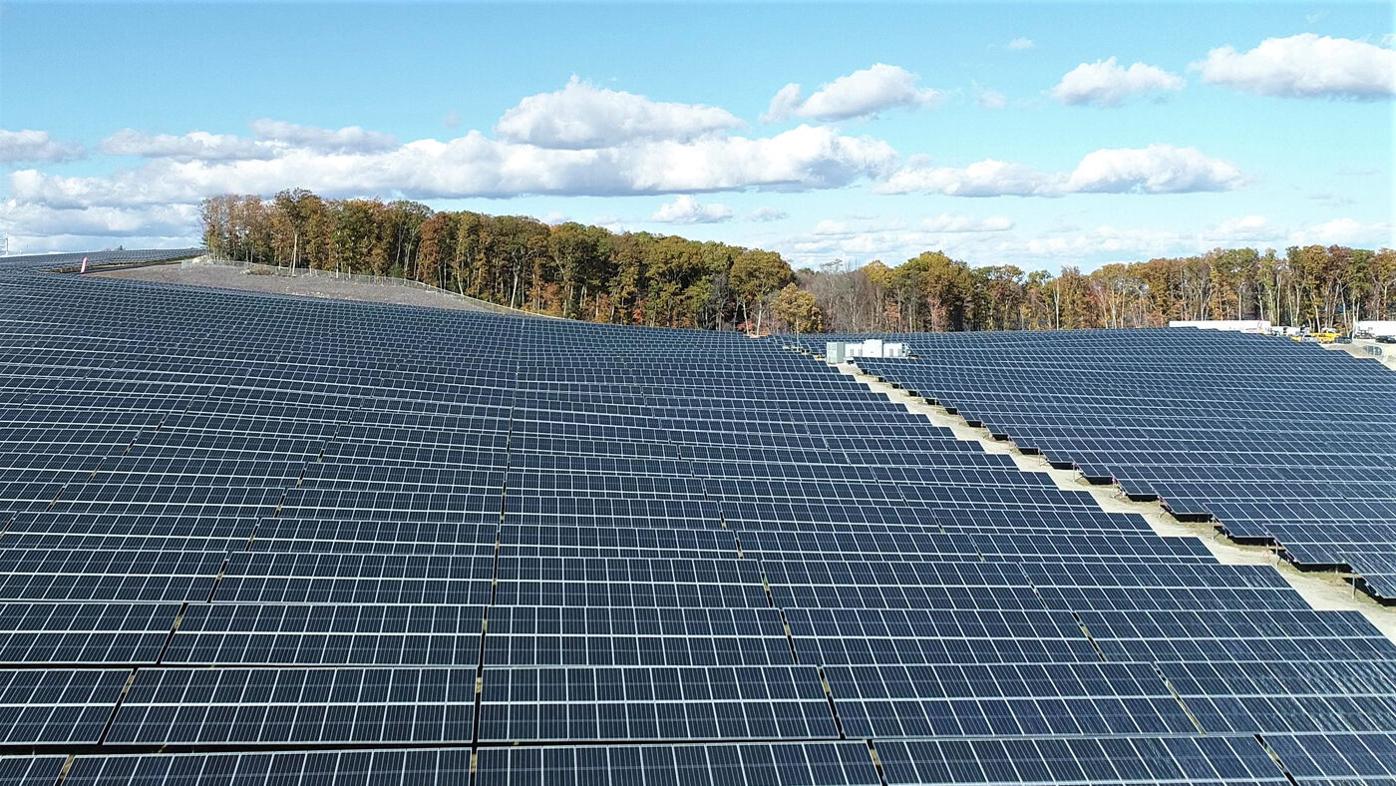 A drone photo provided by Green Development shows a portion of the Iron Mine Hill Road site. 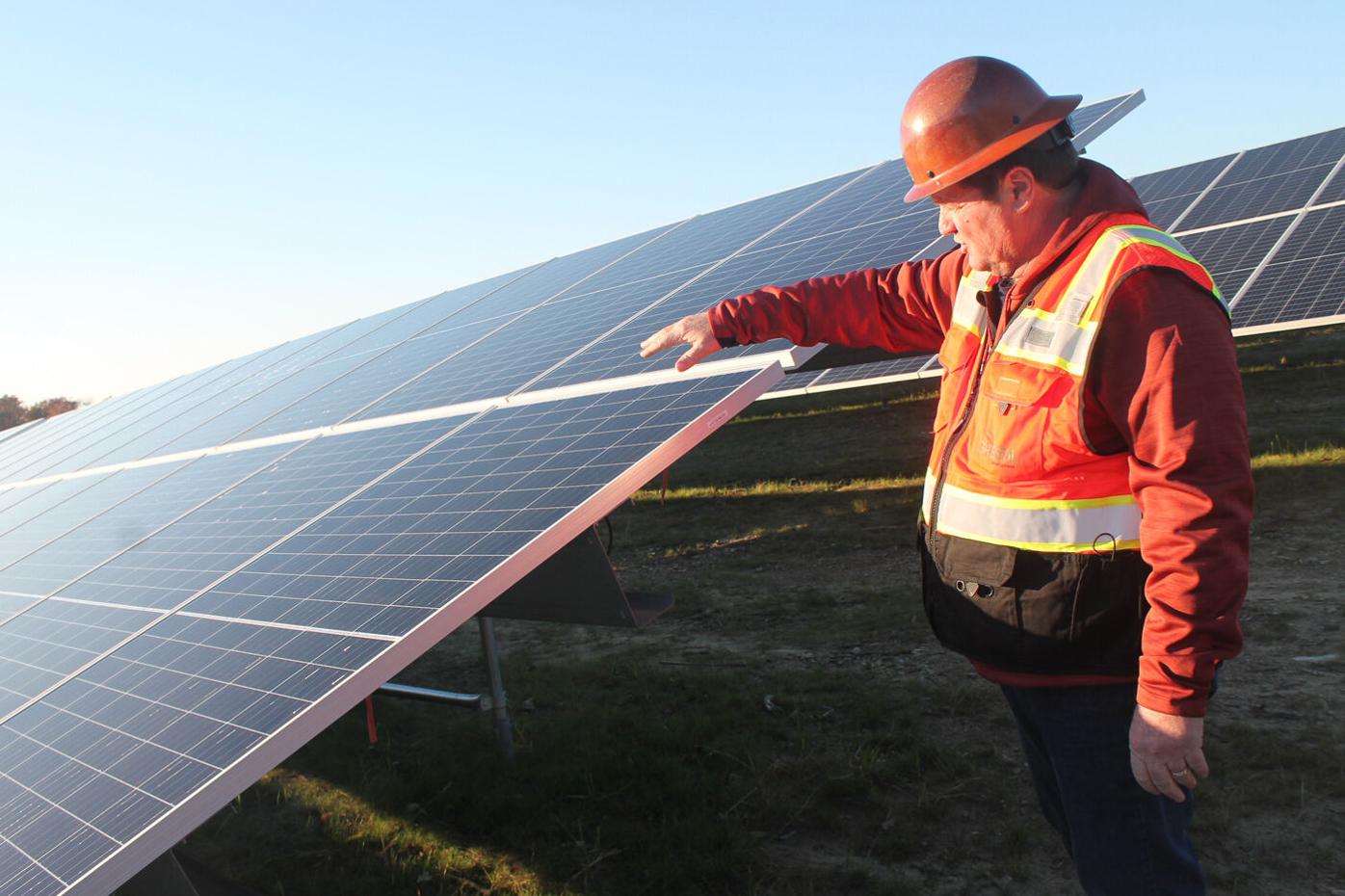 Mark DePasquale, chairman and founder of Green Development, points out the capabilities of a solar panel at the new North Smithfield farm.

Hannah Morini, director of business development for Green Development, and Mark DePasquale, the company’s chairman and founder, stand next to a solar panel at the new, 38.4-megawatt solar farm off Iron Mine Hill Road in North Smithfield. The project is expected to go online next month.

A drone photo provided by Green Development shows a portion of the Iron Mine Hill Road site.

Mark DePasquale, chairman and founder of Green Development, points out the capabilities of a solar panel at the new North Smithfield farm.

NORTH SMITHFIELD – Five years ago, it would have been hard to imagine that North Smithfield would soon become a center for Rhode Island’s solar energy production.

But starting next month, a 420-acre site off Iron Mine Hill Road will become the home of the largest functioning solar farm in the state, producing enough electricity to power 8,740 homes.

Green Development is nearing completion on its 38.4-megawatt solar farm that began construction in 2020. Company Chairman and Founder Mark DePasquale told The Breeze during a tour of the property on Monday the company expects to finish installing panels by the end of this week.

The start date for energy production now hinges on the completion of a substation National Grid is building to connect the farm to the power lines that border it on three sides. DePasquale said he expects the substation construction to be complete in the second week of December. A two-week testing period will follow.

The final project comprises about 100 acres of solar panels spread out across several properties north of Iron Mine Hill Road. The largest of those properties, owned by Ralph and Muriel Ferra, was formerly home to a scrapyard and driving range. The project involved clearing about 185 acres of land, according to forestry permits obtained through the Rhode Island Department of Environmental Management.

DePasquale said the site includes approximately 120,000 solar panels, each of them rated at 400 watts. Electricity travels from the panels to inverters that convert it from direct to alternating current and then through underground wiring to the substation at the top of the site. A paved road accesses the substation from the site’s entrance on Iron Mine Hill Road.

“There’s miles and miles of pipe under that road that feeds (electricity) into different boxes,” he explained during the tour.

The panels, he said, have a 20 to 25 year lifespan and will reduce their energy output by a half percentage point every year. About 30 cameras monitor security on the site and can be accessed from the company’s control center in Cranston

“If the field is running fine and there are no problems, there’s no reason to come up here,” he said.

While the original plans called for placing battery storage and related equipment at around 36 different points throughout the site, a new plan reduced the number of battery locations to 11 and instead calls for centralizing energy storage near the substation. Hannah Morini, director of business development for Green Development, said that battery storage is expected to become a larger part of solar development as companies look to diversify their energy holdings and improve their storage capacity. DePasquale explained that the equipment allows the company to store energy onsite and feed it into the grid during peak usage times in the evening rather than immediately transferring it to the grid to be absorbed by high-energy demand areas such as Boston.

“You’re going to see a lot more battery on all these sites. This time of day, we’re storing the energy,” he said.

The company is still waiting for the Town Council to approve changes to its tax agreement with the town based on the new energy storage plans.

The project will increase the company’s holdings in Rhode Island by nearly a third, adding 38.4 megawatts of production to its existing 78 megawatts of solar and wind operations. One of the company’s other major projects, a seven-turbine wind farm in Johnston, is visible from the substation off Iron Mine Hill Road.

“A lot of people don’t like what we do, but right now, all the energy that we’re putting out, we’re at about 34,000 homes that we power with Green,” he said.

The project has been controversial from the start, with neighbors raising concerns about tree clearing and the possible soil erosion and wildlife disruption that could result. DePasquale said the site hasn’t had any problems to date with water runoff, despite the heavy rains over the summer. Instead, he said, the rain helped promote grass growth beneath the panels, part of a long-term plan to stabilize the soil and create a habitat for bees and other pollinators.

“With all the rain we had this year, we didn’t see any breaches on the site,” he said.

The new solar farm will be part of the state’s net metering program that allows municipalities and nonprofit organizations to sign up for discounted renewable energy. DePasquale said he expects the solar and wind industries to continue to grow in Rhode Island, though exactly what future solar farms will look like may depend on the legislative incentives.

“A lot of the farmers right now are really struggling, so they look at solar as a short-term solution for their site,” he said.

The company expects to secure its right to interconnect from National Grid in December.

The previously proposed natural gas power plan in Burrillville would take 40 acres and produce 900MW of power. To produce this same amount of energy with a solar farm would require 9843 acres of land. This is neither practical nor environmentally friendly.

Farm....calling it that kinda makes me sick. What a joke.

I grew up on Iron Mine and I've always wondered why they don't put these solar farms underneath the already cleared Power Lines ... I've ridden dirt bikes many times years ago on the power lines and it's the hottest sunniest place in town ... Deforestation for the purpose of solar farms defeats the ecological purpose ... We need trees to breath !!! Deforestation is shameful !!

I agree about putting them in the area of the power lines, but to be fair clearing 185 acres equals a little over .25 square mile. They remove entire mountain tops to mine coal. Gillette Stadium is larger in area and we can still breathe.

How much of this energy stays in town ? And what happens to all the hazardous waste when this farm becomes obsolete ?

Depends how many people sign up for net metering or similar.

Also Green Development has always used monocrystalline silicon PV cells which do not contain hazardous waste. It is possible they contain trace amounts of lead in solder, though over 99% of modern solder is lead-free, and compared to the old junk yard that used to be on this site, this installation will be like the garden of eden.

It's really not a "Green Project" if it requires the de-forestation of about half the site!

What happend to the other comments that were on here this morning ? I guess the Breeze did not like them and deleted them !

Welcome to the world of censorship. I had a comment rejected without explanation.

Not on this story, just want to be clear.

The Valley Breeze is a private company which publishes a free weekly newspaper along with all the free content available on this website. All of its income comes in the form of ad revenues. If they published every comment posted on here, I sincerely doubt their advertisers would stick around very long, and the paper and this website would be gone soon after.

Don't think "They're censoring me!" which seems downright ludicrous to think of a small, free, regional publication with few staff and even fewer staff willing to moderate these comment sections (Looking at you Ethan) in the first place. Instead think "Hmp, maybe they're just busy working on something that generates revenue instead of consuming it like these comment sections do." Or maybe ask yourself "Is everything I've ever tried to post on here target-audience and advertiser friendly?" and I bet you'll have the answer to why not everything passes muster.