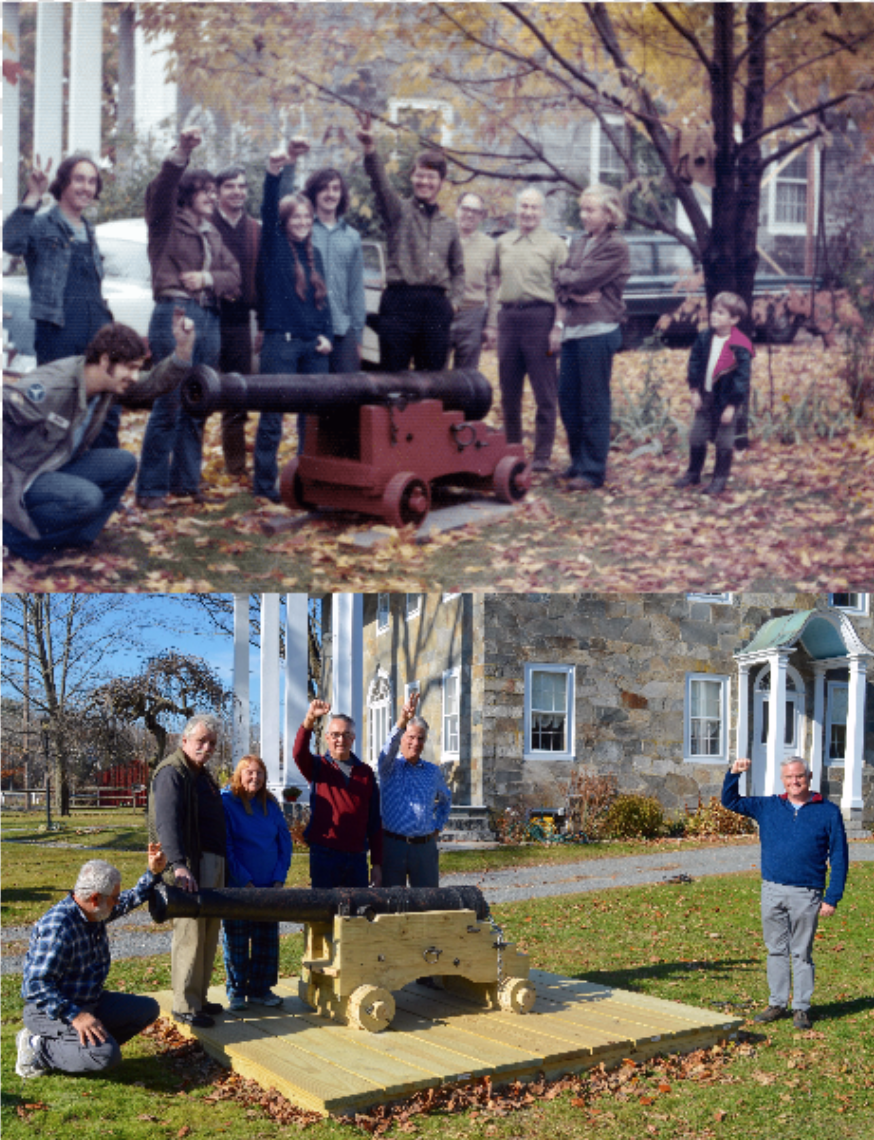 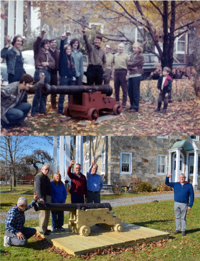 Above, friends of the Mowbray family, the last owners of Hearthside House, celebrate their efforts to move a 1,500 pound cannon onto a carriage in the fall of 1971. Below, many members of that original group reunited last week, as the cannon was put back in place in the front yard. John Zangari gazes down the barrel of the cannon, as he did in 1971. Joe Puleo, second from left, (standing in top photo) stands beside Penelope Mowbray (who took the original photos) Bill Truesdale and Paul Zangari. Stuart Mowbray, who is the small boy in the ‘71 photos, is pictured at right. 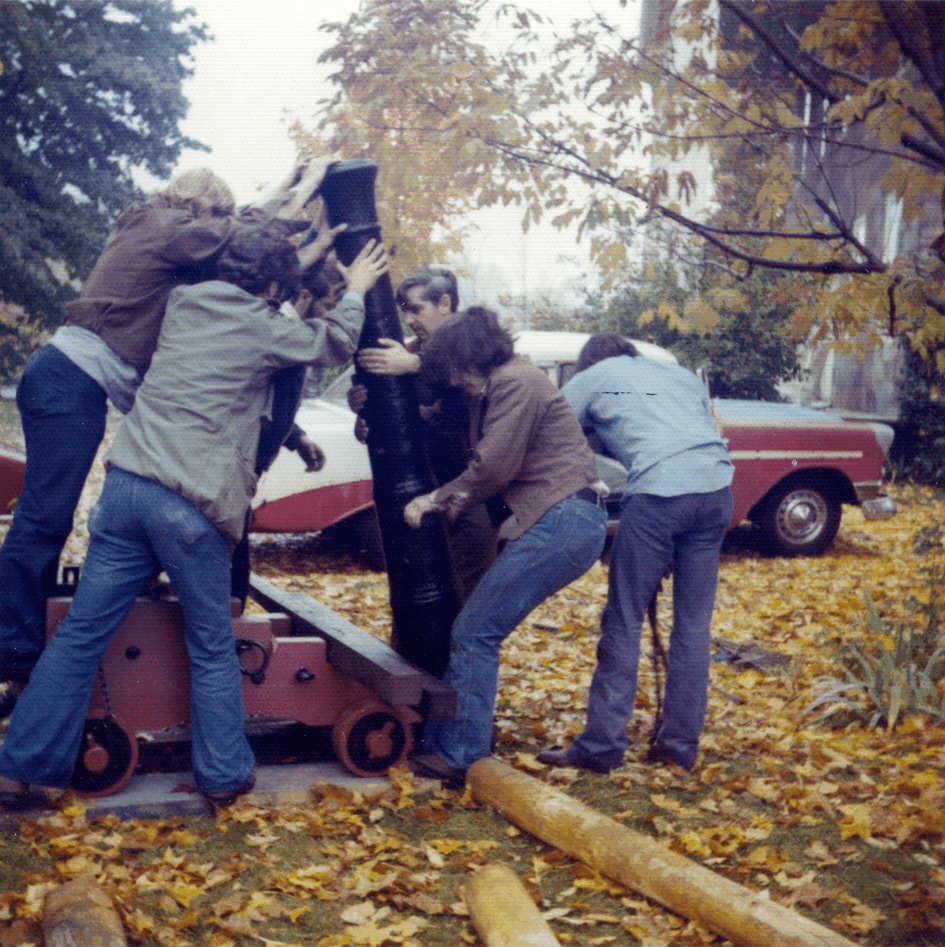 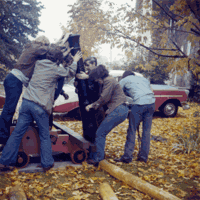 The cannon is hoisted onto its carriage outside Hearthside House in the fall of 1971. Hearthside’s former owner Andy Mowbray is pictured at center, standing to the right of the barrel of the cannon.

Above, friends of the Mowbray family, the last owners of Hearthside House, celebrate their efforts to move a 1,500 pound cannon onto a carriage in the fall of 1971. Below, many members of that original group reunited last week, as the cannon was put back in place in the front yard. John Zangari gazes down the barrel of the cannon, as he did in 1971. Joe Puleo, second from left, (standing in top photo) stands beside Penelope Mowbray (who took the original photos) Bill Truesdale and Paul Zangari. Stuart Mowbray, who is the small boy in the ‘71 photos, is pictured at right.

The cannon is hoisted onto its carriage outside Hearthside House in the fall of 1971. Hearthside’s former owner Andy Mowbray is pictured at center, standing to the right of the barrel of the cannon.

LINCOLN – Stuart Mowbray still remembers the day in the autumn of 1971 when his father Andy gathered together a group of friends to move a 1,500-pound cannon.

Childhood memories can be fleeting, but that particular day stands out among Stuart Mowbray’s earliest recollections of his youth at Hearthside House.

The late Andy Mowbray was the owner of a Providence publishing company and collector of historic military weapons and artifacts. When the Mowbrays called Hearthside home, a Revolutionary War-era cannon sat in the front yard.

The cannon, which was returned to Hearthside this week after several decades, was cast around 1728 in France. It is believed that sometime during the Revolutionary War the cannon fell through the ice while crossing a river in Warwick, likely on the way to or from the Siege of Boston.

A Works Progress Administration crew discovered and retrieved the sunken cannon in the 1930s, and it was displayed for some time at a local Pontiac dealership. When the business closed, Andy Mowbray purchased the cannon for $400 at auction.

The tube was delivered to Hearthside, where it sat next to the driveway for several years, that is, until a family friend crashed his 1956 Imperial LeBaron into the cannon.

The car had been custom-made for the son of the founder of Chrysler, and had a full record player in the dashboard. The cannon survived the collision unscathed, but the Chrysler bore a permanent battle scar after the incident.

Prompted to raise the cannon off the ground, Andy tapped George Lucier to build a custom carriage. For the work, Mowbray traded a Model No. 1, third issue Smith & Wesson revolver.

He had purchased the gun and several others in their original boxes from a local hardware store, where it was still on the shelves from the 1870s.

When the time came to install the cannon on the carriage in the fall of 1971, Andy rounded up a group of his son Drew and daughter Sherry’s friends from their gathering spot in the kitchen to help.

“The whole thing happened literally at the spur of the moment,” Joe Puleo remembers. “George showed up with the carriage in the back of his pickup truck, and we said: what the hell, why don’t we put the cannon on it. That’s what it was made for. So we rolled the cannon across the yard!”

They gathered some fence posts – a pile of them happened to be on the ground to rebuild a corral for Sherry’s horse – and used the posts to roll the 1,500-pound cannon across the front yard at Hearthside.

Stuart, who was several years their minor, supervised the effort, as his mother Penelope snapped photos.

“It was quite the sight as they manhandled the tube over the grass and tipped it up, with its muzzle pointing toward the sky,” Stuart wrote in a copy of Man at Arms, a magazine founded by his father’s publishing company. “It was so heavy that the cascabel sank into the ground and left an impression that I was still bumping into with my lawn mower years later.”

Hoisting the cannon into place on the carriage took the help of all involved, he said. It took several hours, and “a collective sigh of relief” went up when it fell perfectly into place.

And there it sat for several decades, chained to a tree by Drew. “Fifteen years later, the tree died and we found that chain embedded in the bark, where it had girdled and killed it,” Stuart wrote.

When Andy died in 1996, most of his collection of military artifacts were donated to local historical societies, including the cannon. The cannon was strung up in a factory, where it sat untouched until last year, when the cannon made its way back home to Hearthside.

Hearthside is now a historic house museum, run by the nonprofit Friends of Hearthside. The nonprofit has brought several items back home over the years, but the cannon was the first to require the help of a tow truck.

The cannon was donated back to Hearthside by the Rhode Island Historical Society last October, but sat in the yard (much like it did in the 1970s) until a custom carriage could be built to replace the older one.

When the cannon was installed last week, several people who helped maneuver it into place that fall day 50 years ago returned to watch, and to re-create the memorable photos from 1971.

Stuart and his mother Penelope were among them, along with Puleo (who was 20 years old, pictured in his World War II “Ike” jacket in ‘71), Bill Truesdale, and brothers Paul and John Zangari, sporting much shorter haircuts than back then.

It was a chance to reconnect, and to reminisce on the days of old and their memories at Hearthside, where they gathered together as young adults. Not many friends have moved a cannon together, they said.

“I once asked Penny why she put up with us all those years,” Puleo recalled. “She said well, we always figured if you were here you couldn’t get into trouble,” he said with a chuckle. Though Puleo was present for the cannon’s return, he was hesitant to step inside the home, wanting instead to preserve his memories of Hearthside as it was when the Mowbrays lived there. “We’d sit around and drink tea,” said Puleo.

Stuart said it was a great place to grow up, though he admits his rambunctious tendencies as a child caused Penelope a lot of anxiety.

“I’d jump from the top of the stairs and fly down to the bottom,” he said. “My poor mother.”

At that time, he said it was safe enough for the children to play on Great Road.

As for the cannon: Puleo said some of the people in the original photos were there simply because they stopped to see what all the commotion was about.

Puleo joked that they were lucky to have nice weather. “You don’t want that thing to blow away,” he said sarcastically.

The Mowbrays were the last family to call the circa-1810 Federal style mansion home before the town of Lincoln took over ownership in 1996 upon Andy’s death. They lived in the home for 40 years, longer than any other family.