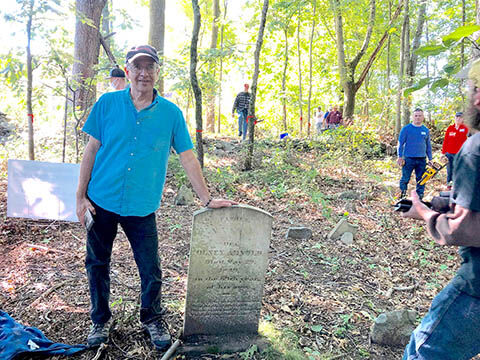 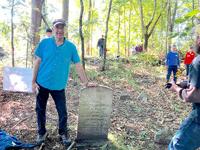 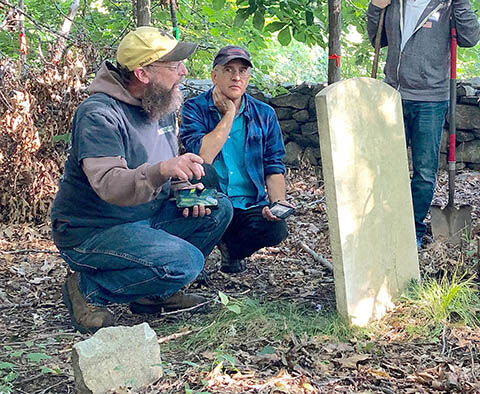 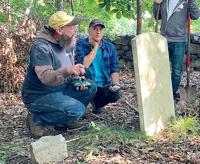 Ken Postle, kneeling beside Charles Foster, speaks about the differences between Quaker fieldstone burial markers (seen at the bottom left) and engraved headstones like Olney Arnold’s, at right. 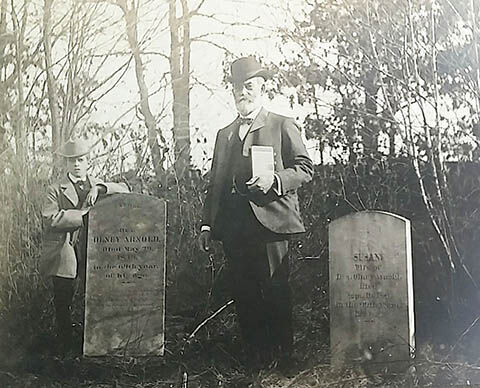 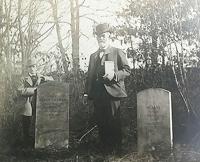 Charles Foster shared this historic photograph of his great-great-grandfather Joseph Henery Foster, son of Olney Arnold, and his grandfather Chester C. Foster at the Arnold Family Lot in Lincoln.

Ken Postle, kneeling beside Charles Foster, speaks about the differences between Quaker fieldstone burial markers (seen at the bottom left) and engraved headstones like Olney Arnold’s, at right.

Charles Foster shared this historic photograph of his great-great-grandfather Joseph Henery Foster, son of Olney Arnold, and his grandfather Chester C. Foster at the Arnold Family Lot in Lincoln.

LINCOLN – Stepping inside the historic cemetery off Lladnar Drive for the first time, Charles Foster approaches a row of headstones belonging to his Victorian-era ancestors.

He stops to pull up an undated, black-and-white photograph of a young boy in a cowboy-style hat and oversized jacket, whose hands are clasped over the gravestone of Olney Arnold. An older, bearded gentleman wearing a bowler cap stands beside him.

“That’s my grandfather, looking rather dapper, and my great-great-grandfather,” Foster said.

The photo was taken in the very spot Foster stood last Saturday morning: between two headstones at Lincoln’s Historic Cemetery No. 56. After months of online genealogical research, the Essex, Mass., resident visited the site for the first time over the weekend, when a group of local volunteers spent several hours cleaning the wooded lot as part of a community service project.

On the anniversary of 9/11, members of the Blackstone Valley Stake, Church of Jesus Christ of Latter-day Saints helped renovate the forgotten cemetery during a day of service and remembrance.

Their efforts were guided by the Blackstone Valley Historical Society’s Ken Postle, who began recovery work there several years ago. Olney Arnold’s headstone had sunken completely underground, and Postle said there was evidence of vandalism in the lot.

Thanks to his work and the help of fellow volunteers, the cemetery has been preserved so descendants like Foster can visit their family lot.

Glancing again at the photo of his great-great-grandfather Joseph Henry and grandfather Chester at the grave site, Foster said he’s not sure what compelled them to snap a picture with the headstones of his 18th-century ancestors.

The first headstone in the picture – and the one Postle recovered back in 2015 – belongs to Olney Arnold.

Olney married his wife Eunice Miller in 1801. Their first child Thomas was born the next year, followed by John in 1804 and Daniel two years later. Twins Emeline and Angeline (Foster’s direct relative) were born in 1809; then Eunice Jr. in 1811 and Sylvan in 1813.

Olney’s wife Eunice died on Jan. 12, 1816, after giving birth to triplets 10 days prior. Tragically, two of the triplets, Mary Jane and Amey, died on Jan. 21. Against all odds, the third triplet Mahaley Dyer survived to age 55.

Mary Jane and Amey are buried near their mother in Lincoln 56.

Olney, in desperate need of a mother for his eight living children, married Susan (Lyon) Norton, the second headstone in Foster’s photo. She gave birth to a son named Jacob in October of 1816, just 10 months after Olney’s first wife died.

They had an additional eight children together, with the youngest being Deborah and Pardon. In another tragic tale, 3-year-old Deborah and 11-month-old Pardon died four days apart in 1833.

The siblings are buried together in a double grave, and share a headstone.

Olney and Susan’s graves are the most prominent in Lincoln 56. The stones have succumbed to some damage over the years, but stand side-by-side again thanks to recent volunteer efforts.

Postle also recovered an unengraved marker from between Olney and Susan, which he believes belongs to Eunice. She would have been buried in the traditional Quaker manner, using an unengraved fieldstone.

“Early Quakers did not bury with caskets, and the stones were unengraved. They did not believe in ostentatious displays,” Postle explained.

As Saturday’s cleanup winded down, Foster shared some memorabilia, including a wooden children’s toy handmade by Olney, a pair of mittens stitched by Angeline, a circa-1789 tree root cane from the Lyon family topped with a serpent head.

There’s a photo of Angeline in a patterned dress, the doll named “Johnnie” that she sewed for her children and grandchildren, and a pair of tiny leather children’s shoes passed down through generations.