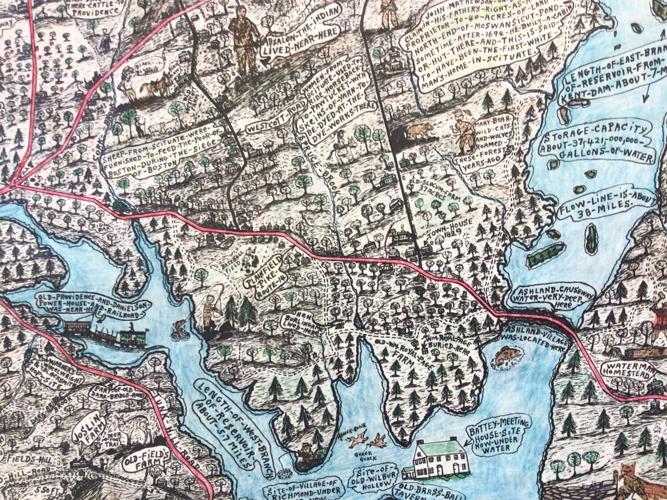 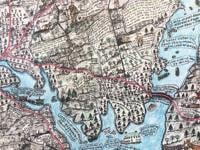 Details in the map including a man fishing in the reservoir or facts about residents are what make George Matteson’s maps historically significant (and fun) today. 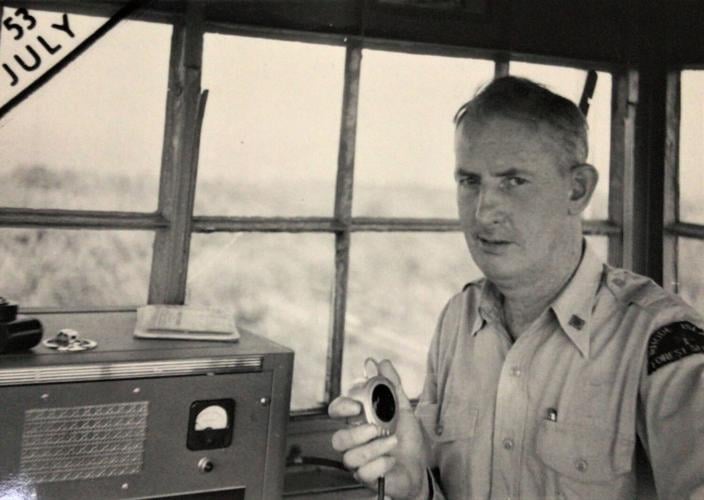 Scituate resident George Matteson also worked as a Forest Ranger and spent much of his professional life helping to prevent forest fires.

Details in the map including a man fishing in the reservoir or facts about residents are what make George Matteson’s maps historically significant (and fun) today.

Scituate resident George Matteson also worked as a Forest Ranger and spent much of his professional life helping to prevent forest fires.

SCITUATE – After attending a cartography class with one of Gen. Douglas MacArthur’s men in the Civilian Conservation Corps in his youth, Scituate’s George Matteson continued his passion for creating maps by hand-drawing one of the first-ever maps of Scituate.

Though not generally known by name, Matteson’s maps are instantly recognizable by his design style, which features caricatures of residents and often includes historical details of the area.

One famous map around town is the map of Scituate handed out at Town Hall, Linda Kornatz of the Scituate Preservation Society said. That map is on the tame side of what Matteson created, Kornatz said.

Kornatz is hosting a one-night presentation on June 23 about Matteson, including original maps and stories about his life provided by his grandson, Paul St. Amand.

Kornatz said she first came in contact with St. Amand while researching Potterville for a historical series on Scituate villages. Upon seeing Matteson’s maps of Scituate, Kornatz took the reins on a presentation about Matteson with his grandson’s help.

Kornatz calls St. Amand a “conscientious custodian of his grandfather’s extraordinary collection,” which includes maps in all stages of production.

Matteson, who lived from 1902 to 1977, lived a story-filled life as a forest ranger for over 40 years. His work as a ranger led him to take part in more than 9,000 search-and-rescue missions for lost hunters or hikers, 100 plane-crash rescue missions and myriad forest fire patrols.

His position as a fire ranger gave him an advantage in his hobby as a cartographer. Often, Matteson would fly overhead to spot a forest fire, giving him a birds-eye-view of the town.

In his early life, Matteson was known to help his father drive a hitch with a dozen or more horses for the Ringling Brothers and Barnum and Bailey Circus. Matteson was known for his horse skills, and is featured in a photo standing atop a horse’s back.

Matteson was also part Nipmuc Native American, Man of the Year in Coventry, and a member of the 1st Light Infantry in the Rhode Island State Militia. He lived in a tarpaper shack after he lost his home in the Great Depression when he moved back to the family lot in Scituate on Matteson Road, was a key promoter in the Smokey the Bear Campaign and named his daughter after a sister who died by a rattlesnake bite at two-years-old.

“He was known to say, ‘I’m behind on my work.’ He was so busy, it’s obvious why he said that,” Kornatz said.

Kornatz said while his life outside of map-making could fill the presentation (and will be discussed) for her, it’s his maps that made a lasting impression.

“It’s the details he puts into them. They are like a ‘Where’s Waldo’ for Scituate. It’s those silly little details he adds that make the maps so great,” Kornatz said.

Kornatz said she is fond of the animals featured in his maps that are hidden among other details.

In his colorized map of Scituate, Matteson adds details such as where a Scituate resident killed a bear, where Native Americans lived around town, where lost towns are now located under the Scituate reservoir, and so much more.

The details in his maps are due to Matteson’s drive to map out the area. In partially finished maps, Kornatz said his process is illustrated in gridded-out sections of town. Matteson would walk each grid, going down side roads and driveways and knocking on doors.

Matteson struck up conversations with residents, asking about important events that occurred in the area or the home, and recorded them on his maps.

“They are very much a visual history of Scituate as well as a map. He puts pieces of information he gathered from residents on the maps, which can easily lead you down a rabbit’s hole looking for more information,” Kornatz said.

One map features a man swinging an ax known as Hen Jackman, who is said to be able to be the fastest at cutting wood. After researching Jackman, Kornatz learned of a disturbing history of him possibly sabotaging a local business and suffering dire consequences.

“I’d never know this if I didn’t see this figure and ask what the story is about this,” Kornatz said.

“His maps are treasured for the folklore and illustrations. Stories behind some of the illustrations include gold mines in Foster, the first steam sawmill, and Hen Jackman will be shared,” Kornatz said.

Matteson often added Smokey the Bear in his maps, a nod to his work with fire prevention as a forest ranger. Kornatz said in Matteson’s day, forest fires were a serious threat to life. In 1946, more than a dozen forest fires broke out in Rhode Island making the national news. She said Matteson was instrumental in teaching children how to prevent forest fires.

“After the hurricane of 1938, the state was like a tinderbox,” she said.

His first sets of Scituate maps were sold to the Hope-Jackson Fire Department for their description of lesser-known access roads. Kornatz said initially, Matteson did not want to accept money from the Fire Dgepartment, but later took payment of $10 so he could purchase supplies to make more.

Kornatz said she is keeping some of the best stories about Matteson’s life for the presentation. She said due to anticipated popular demand, the 7 p.m. presentation is by reservation only. If needed, she will host a second night. Register by email at scituatepreservationmembership@gmail.com, or by phone at 401-764-0802. A $5 donation is suggested for non-members at the door.