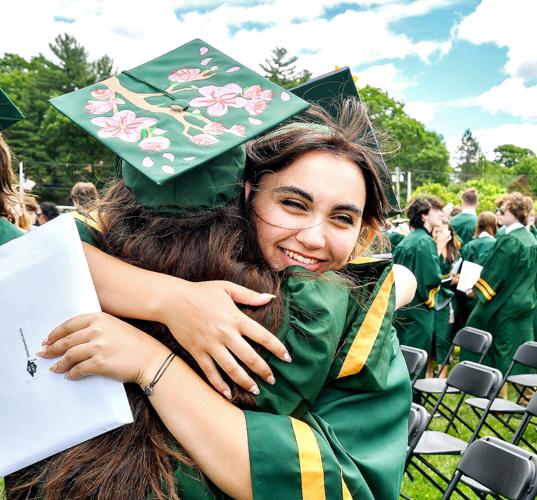 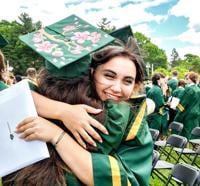 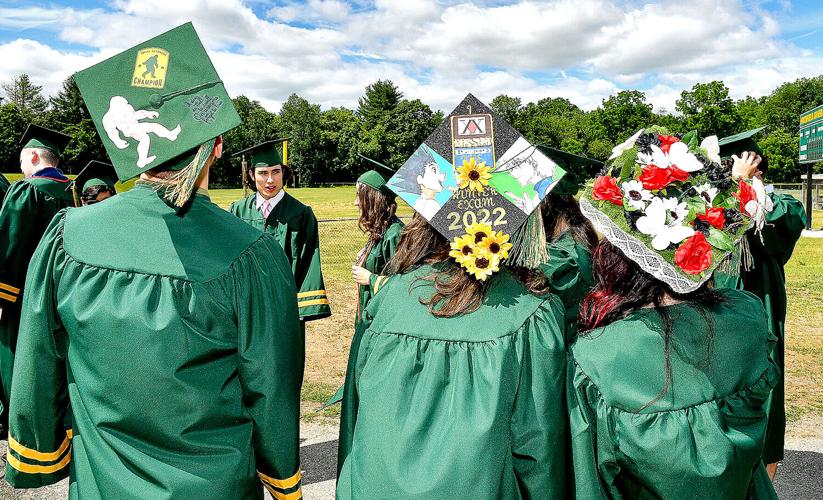 Soon to be graduates of Smithfield High School show their colorfully decorated caps as they wait for their graduation exercises to begin last Saturday. 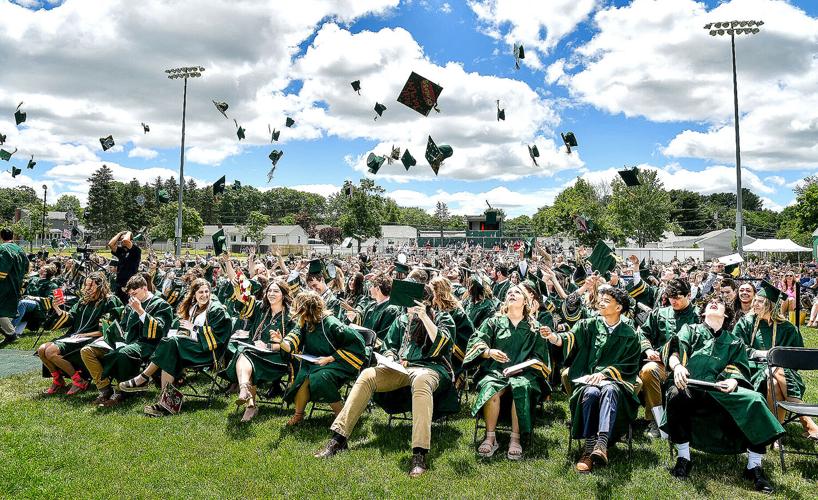 The seniors become graduates and as is tradition, they toss their caps in the air in celebration.

Soon to be graduates of Smithfield High School show their colorfully decorated caps as they wait for their graduation exercises to begin last Saturday.

The seniors become graduates and as is tradition, they toss their caps in the air in celebration.

SMITHFIELD – As the Class of 2022 gathered for a final time on the football field at Smithfield High School last Saturday morning, June 18, members of the class and administrators reflected on the memories made over the past four years.

Valedictorian Aleksander Reilly gave the last valedictorian speech before the school moves to the Greek system with top-earning students rather than top 10. He dedicated his speech to the community that shaped each graduate’s life over the past 18 years. For many of the graduates, Smithfield has and always will be a place where Reilly said he felt accepted, appreciated, and a place he can call home.

Through trials and tribulations, he said, Smithfield was always there to pick him up.

“And no matter where life takes us, no matter how near or far we end up, Smithfield, and the communities we have formed within it, will always be there,” he said.

Reilly said one of the most profound impacts on his life has been the community formed within their graduating class. He said he has seen many of the same faces since preschool and kindergarten, and together their classmates have been through highs and lows and everything between.

“It’s hard to imagine a world where I am facing the difficulties of life or experiencing the joys it has to offer without all of you,” he said.

Reilly advised the Class of 2022 to cherish the new communities they become part of and to never forget Smithfield and their graduating class.

Luckily, he said, the community that raised them, including family and friends, will remain the same. He thanked everyone in attendance for their love and support along the way.

“And I offer this reassurance to everyone in attendance: the bonds that have been formed by the communities with families are special, and no distance can ever break them,“ he said.

Salutatorian Tyler Rose said he is a free individual, much like the entire Class of 2022, which is comprised of citizens who cherish their individuality within and beyond the walls of Smithfield High School.

Throughout their four years at SHS, Rose said the students dreamed and thought of freedom. In that dream, students were presented with unlimited freedom during distance learning.

“However, I have the freedom to not drone on about how COVID impacted our class for the third year in a row,” he said.

“And we have found the freedom of being alive in the memories we share,” he said. “Of course, we have our achievements, but what will we remember in 10 months? In 10 years? It’s the bonds we made.”

Rose said he agreed with SHS graduate Cam Kasbarian, who said there is something about Smithfield that comes through in every shared laugh, every joyous and miserable moment, and memories that never die.

He said all the firsts and all the memories of being free are what make the Class of 2022 special, and what will continue to make them special into the future.

For Principal Daniel Kelley, watching the Class of 2022 graduate was extra special because his son, Andrew Kelley, was a member of it. He said he had the pleasure of watching his son grow up alongside many of the young men and women in the class.

“This is by far the closest I have been to a graduating class. It has been my honor and privilege to be a small part of your lives,” Kelley said.

Kelley said his advice to the Class of 2022 is that relationships matter a lot. He said though the past four years will be filled with core memories, it is the relationships made that will be cherished the most.

“We must all be willing to invest more and go deeper in our relationships,” Kelley said.

Class President Emily Rawlinson recapped the last four years in high school with a “story of us.” Some friendships began as early as elementary school formed over Silly Bandz, Rainbow Looms, and Pokémon cards. New characters were introduced in middle school, where she said everything was acceptable to put on one’s main Snapchat story.

In high school, the Class of 2022 began adjusting to the “oddly scented halls” of SHS, and the next four years flew by while being filled with memorable moments.

“As time went on in our story, characters you would have never expected to talk to in the beginning became the best of friends and our small little class started to feel like one big family,” Rawlinson said.

As the final pages arrived with the class dressed in caps and gowns, Rawlinson said graduates have their whole life ahead of them.

“Looking back at your legacy, people will not remember you for your grades or your mile times, but the type of person you were, the impact you had on them, and the impact you have on your community,” she said.

Rawlinson said it is OK to not have everything figured out just yet.

“It’s OK to be unsure, or confused, but know that wherever you are, you have a whole family here, and a whole community behind you rooting for you, your version of success and your happiness,” Rawlinson said.

The last year of having a Valedictorian?? Was someones kid not smart enough to get it so the whole system that has worked forever has to change? The Greek system? Should be the woke system. Beyond Ridiculous.