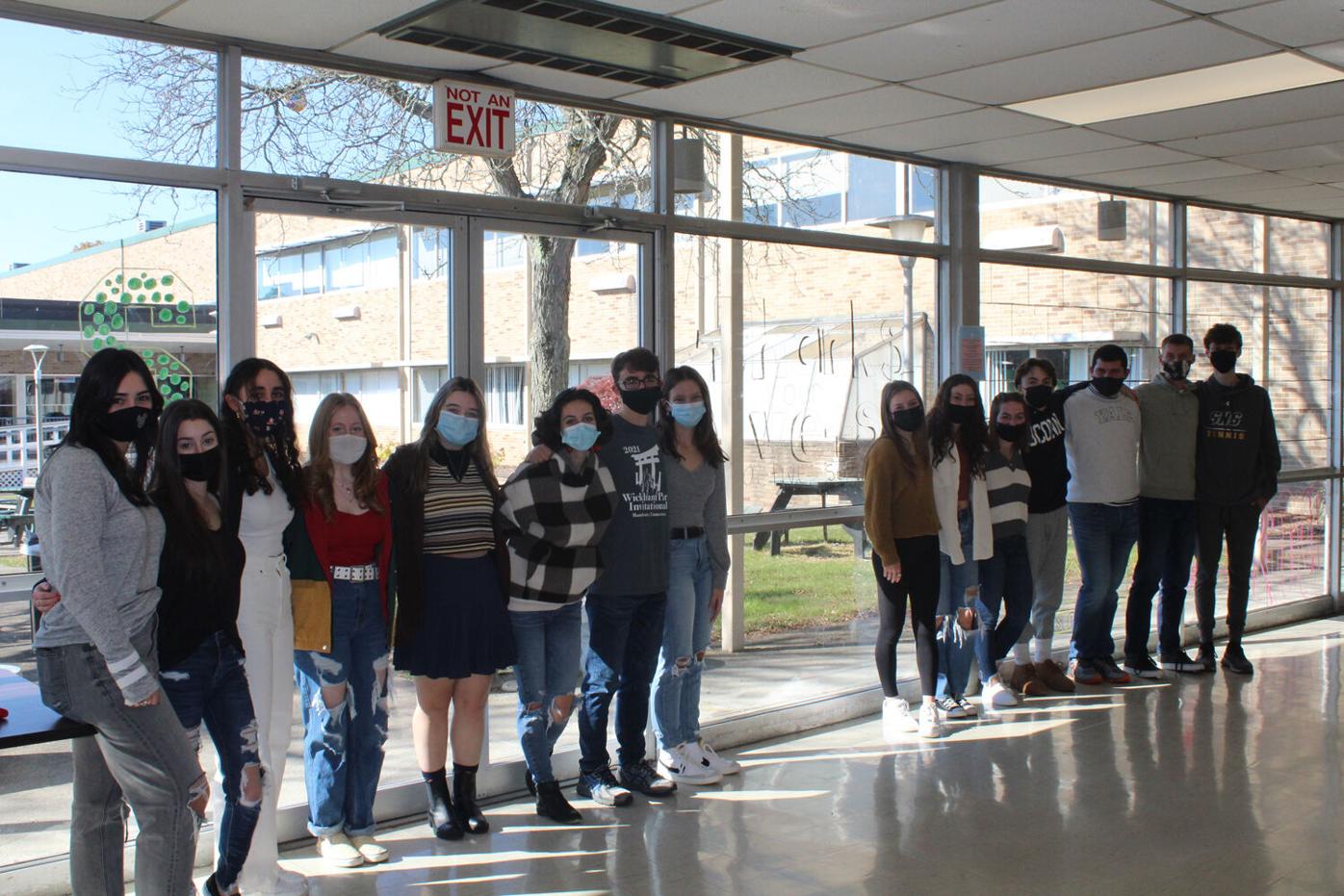 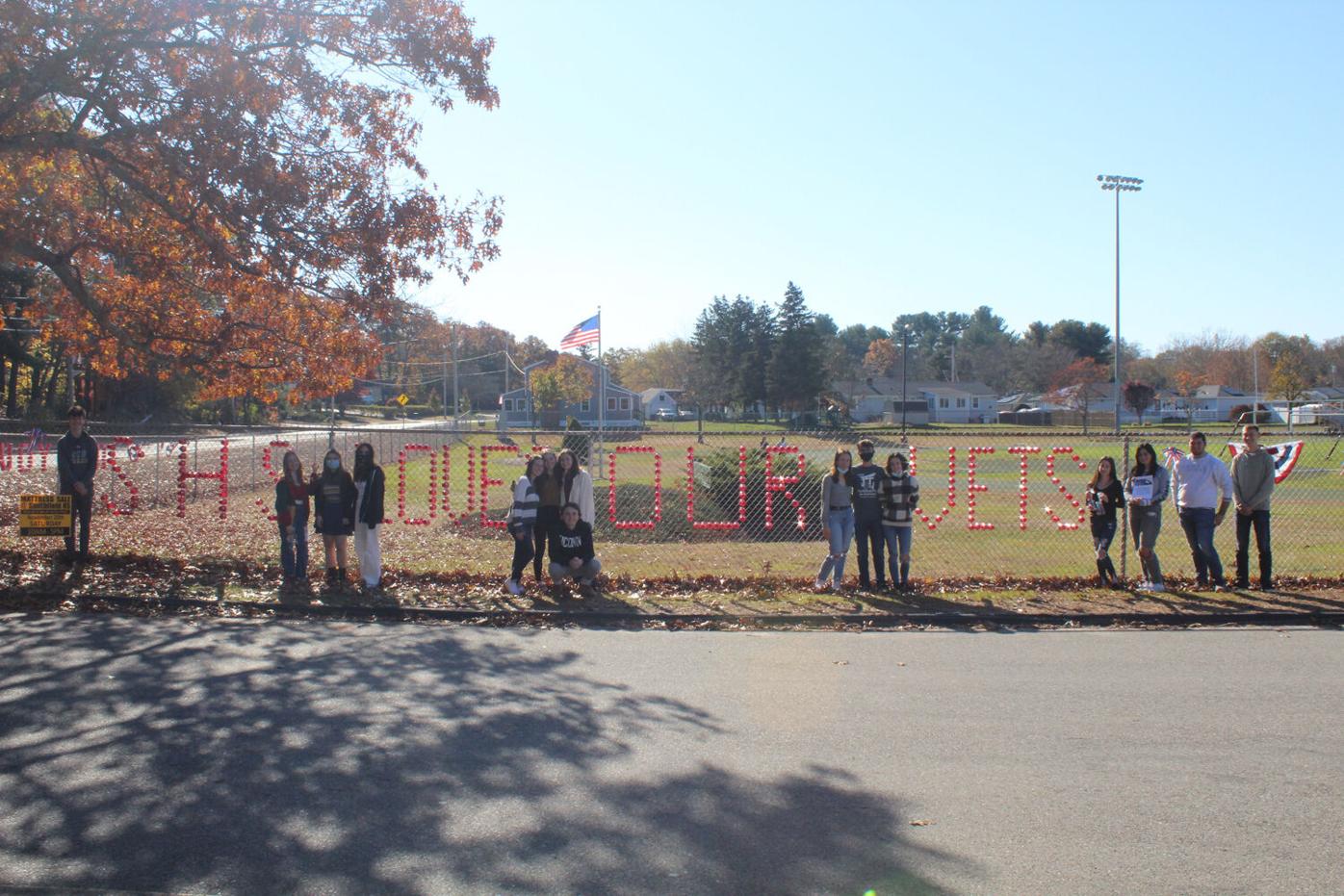 National Honor Society students wrote “We Love Our Vets” in red solo cups on the Smithfield High School fence for a display to thank veterans.

National Honor Society students wrote “We Love Our Vets” in red solo cups on the Smithfield High School fence for a display to thank veterans.

SMITHFIELD – Dozens of soldiers’ names are written on the Smithfield High School food court glass as part of the National Honor Society’s project to honor the community’s veterans past and present who served to protect the U.S.

NHS President Tyler Rose said the “brick wall” is one of four components the club planned to pay respect to veterans this year, including sending cards to veterans and a thank you sign at the fence.

For the brick wall project, Kate Placido and Marissa McDonough created brick walls drawn on the glass corridor representing each branch of the military last Friday afternoon. Students, teachers, and members of the public are invited to write the names of friends and family members who served in the military.

McDonough and Placido said the response has been incredible, and he expects the walls to be filled by the end of this week. The walls will remain up until the week of Thanksgiving to both give thanks and honor to the veterans, and also to give everyone a chance to add someone.

“It was a direct way to honor veterans and active members of the military,” Placido said.

Students also thanked veterans using red solo cups on the fencing at the front of the football field to spell out, “We love our vets,” and decorated the fence with patriotic banners.

“We wanted it to be eye-catching for people driving by to get more of an impact,” Rose said.

“We wanted to use the best way to convey respect in a classy way,” Corriveau said.

NHS members Adrianna Baglini and Kayden Roy worked together on the signs and created red, white and blue candy care packages for each of the honorees.

“We’re making sure that people inside are honored as well,” Baglini said.

The students will also participate in Operation Rhody, which sends homemade gifts and cards to veterans for the holidays. In total, SHS students decorated, signed and shared sentiments on more than 300 holiday cards with several hundred more to go.

SHS members Abigail Stiles and Sydney Singleton led the project during lunches, asking students to fill out a card. Cards are sent to veterans at the Providence Veterans Medical Center, several Veterans of Foreign Wars halls, as well as the Wounded Warrior Project.

“It was a great opportunity to get everyone together to give thanks to vets,” Singleton said.

Rose said the lunches where students filled out the cards were some of the busiest meals he’s seen.

National Honor Society members were to host a storytime on Wednesday, Dec. 10, at the village green in front of the Anderson Winfield Funeral Home, 2 Church St., from 6 to 7:45 p.m. They were to be joined by the Smithfield Police and Fire Departments in reading books to children.

NHS members Dylon Mantovani and Elizabeth Weston spearheaded the event. Weston said there would be great photo opportunities, including pictures with Santa or a snowman. Mantovani said the event would feature a touch-a-truck and performers. He said students were to also take the opportunity to spread awareness about heart health.

Students planned to decorate the green for the holiday activities and serve refreshments as well. Rose said the idea is to rebuild community connections after COVID.