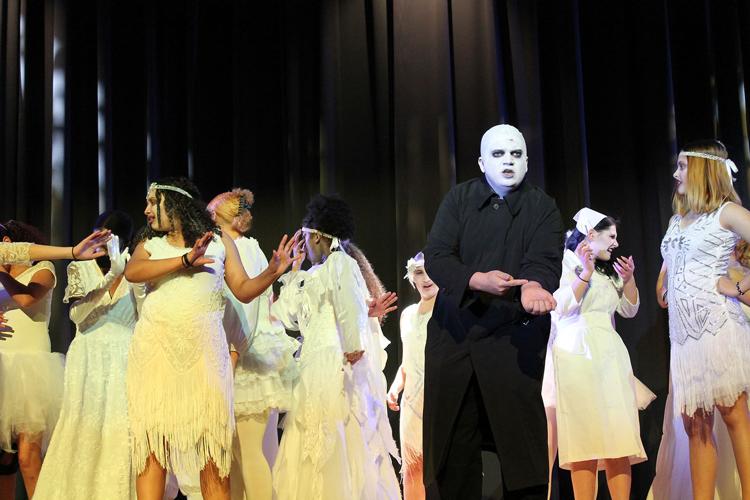 Chris Depot, music director at Woonsocket High School, is performing Uncle Fester as an addition to the cast. 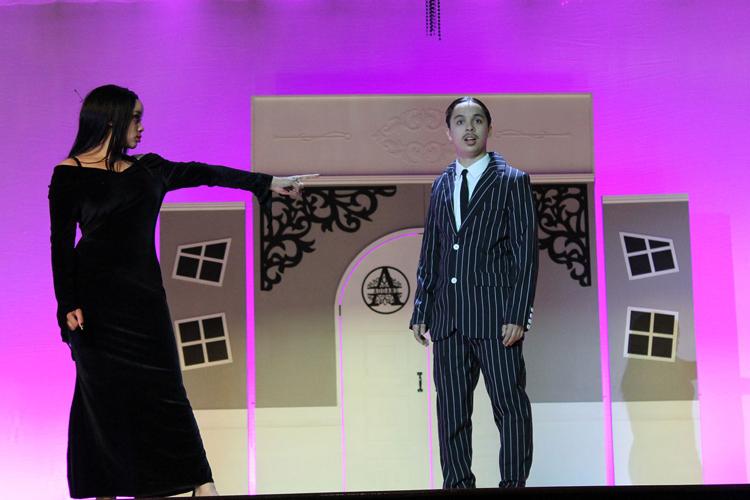 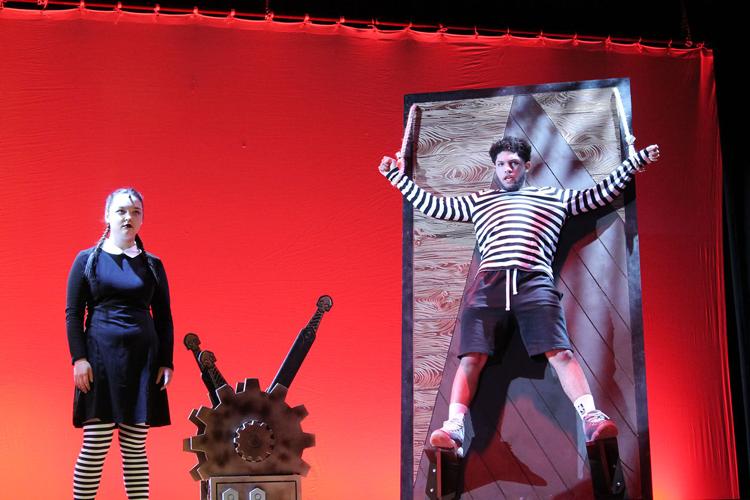 Chayla Valentine, left, and Matthew McClary are Wednesday and Pugsley Addams. Valentine was on the cast for Mamma Mia! in 2020 before the pandemic shut production down.

Chris Depot, music director at Woonsocket High School, is performing Uncle Fester as an addition to the cast.

Chayla Valentine, left, and Matthew McClary are Wednesday and Pugsley Addams. Valentine was on the cast for Mamma Mia! in 2020 before the pandemic shut production down.

Jennifer Maiello, drama teacher at WHS, cheered feedback and direction from the back of the auditorium as students sang, danced, acted, rolled out props, rehashed lines, and solidified sound and light cues.

“These are students I recruited, begged, and stole,” Maiello told The Breeze in between jumping up on stage to fill in for a missing student, Tydus Vongsiri, who plays Mal Beineke. Vongsiri was absent from the dress rehearsal to run in a state track meet. “A lot of kids are involved in more than one thing,” Maiello said, “I try to be understanding, you know?”

Coming back from the pandemic put her drama program back at square one, Maiello said. While students auditioned for leads, anyone who wanted to enroll in the drama class was more than welcome. The only returning students she had, Maiello said, were three of the leads, who perform Morticia Addams, Gomez Addams, and Wednesday Addams. The three seniors are Cathrine Mboge, Alex Paturzzio, and Chayla Valentine, respectively, and had been on the cast of “Mamma Mia!” before COVID-19 shut it down two weeks before opening night.

In total, there are 24 students in Maiello’s class, and 28 alumni going back as far as 2002 who will be performing on stage.

Despite the initial difficulties finding students to perform, Maiello said the most challenging part of this production was working with and around COVID. “We dealt with quarantine, close contacts, kids getting sick,” Maiello rattled off.

Still, everyone was in costume and on stage for rehearsal on Monday. Maiello’s sister, Melissa Olivier, is a teacher at Bernon Heights Elementary School in Woonsocket, and helped with all the costuming that they purchased and organized themselves. At the dress rehearsal, Paturzzio, who plays Gomez, accidentally tore a large hole in his costume, and ideas were floated as to how it would be fixed.

Another challenge Maiello cited was boosting student confidence after sitting inside for years. “We had to get them to have confidence to overcome the anxiety of people seeing them,” Maiello said, pointing out an often-overlooked consequence of the pandemic.

As for student relationships, from Maiello’s perspective, the cast seemed close to one another. “I joked that it should be the Novan family instead of the Addams Family,” she said.

Its nice to see alumni, but only certain ones were considered, it should not matter if students are disabled everyone should be given a chance.