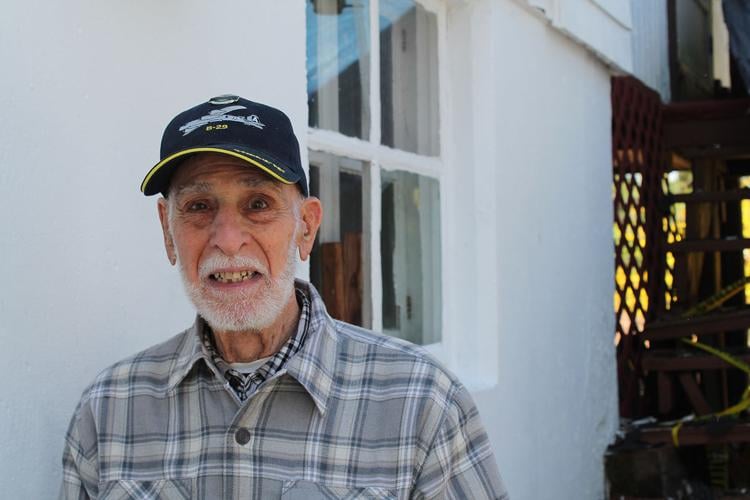 Bernie Pavia, 91, celebrated his most recent birthday in April. He built his own home 60 years ago, and now New Englanders Helping Our Veterans and N.E. Building & Restoration are helping him put it back together. 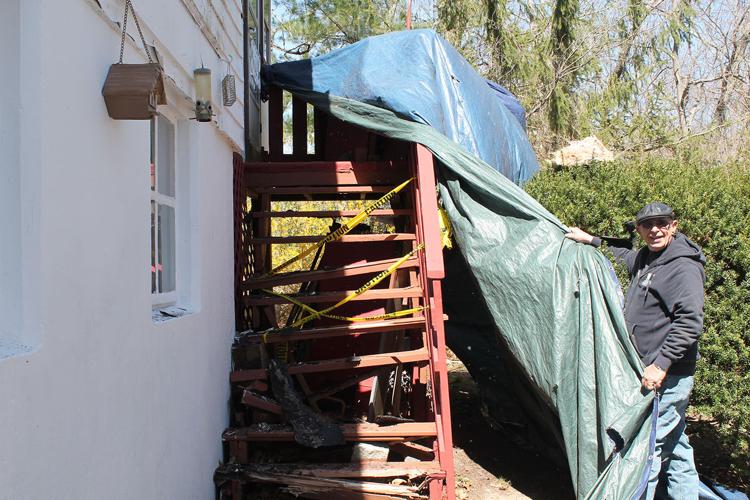 Jim Collins, president of New Englanders Helping Our Veterans, and friend of Pavia, holds back a tarp covering the partially-destroyed staircase leading to the second-floor deck of Pavia’s home. The stairs were destroyed by fallen branches in the same storm that caved in Pavia’s roof.

Bernie Pavia, 91, celebrated his most recent birthday in April. He built his own home 60 years ago, and now New Englanders Helping Our Veterans and N.E. Building & Restoration are helping him put it back together.

Jim Collins, president of New Englanders Helping Our Veterans, and friend of Pavia, holds back a tarp covering the partially-destroyed staircase leading to the second-floor deck of Pavia’s home. The stairs were destroyed by fallen branches in the same storm that caved in Pavia’s roof.

BURRILLVILLE – When Korean War veteran Bernie Pavia heard his roof start to fall in on itself last December, he had no idea what he was going to do to fix it.

A winter storm came through, and a foot of ice and snow had weighed down the roof until it caved in. A tree branch also fell and crushed a deck and staircase that led to the home’s second level.

Pavia built the Johnston home himself more than 60 years ago, and celebrated his 91st birthday just a few weeks ago.

“I didn’t know how to lay bricks, but somehow I did it,” Pavia said, pointing out the walls of the bottom floor of the house, where all of his belongings are currently gathered. He’s living out of the ground-level floor while the upper levels are rebuilt around him. During the day, he says he hangs out and tries to move things around to make the crowded space more comfortable.

“It’s wonderful, he can stay here and his neighbors can visit him,” Jim Collins, president of New Englanders Helping Our Veterans, pointed out to The Breeze.

Collins was connected with Pavia in September 2021. They developed a friendship, and Collins started bringing food by and keeping an eye on Pavia. When Collins heard that Pavia’s roof collapsed, he sprang into action to try to help out.

Luckily, New Englanders Helping Our Veterans, a nonprofit organization out of Burrillville, lives up to its name. The organization assists veterans from all over the region with help, big or small, from purchasing household essentials to giving away vehicles with Henri’s Auto Repair in Woonsocket.

Pavia is a Korean War veteran who has served in both the Army and the Air Force, as well as the Rhode Island National Guard. He’s done a variety of work throughout his life, including a stint as a tow-motor and forklift operator, boiler operator at Kent County Memorial Hospital, landscaper, and other jobs where he worked with his hands.

NEHOV got connected with David Rosati of N.E. Building & Restoration, who volunteered to donate the repairs needed from the roof’s collapse, and work with his insurance company to make sure that he doesn’t pay out-of-pocket for any repairs. Rosati told The Breeze that once a year his company gives back to the veteran community, whether repairing a roof or doing the total renovation it’ll take to get Pavia’s upper floors livable again.

When The Breeze visited, N.E. Building was working on the roof. Once that’s completed, Rosati told The Breeze that they would be working to fix the home’s interior: “We’ll do the electrical, insulation, flooring, and painting,” he assured.

They’re also going to bring someone in to fix Pavia’s deck, which was crushed by a tree branch in the storm. Collins mentioned talking to a tree removal company to ensure that remaining trees in the area don’t damage Pavia’s newly installed roof.

Pavia was gracious enough to give The Breeze a tour of his property, including all the flowers he planted himself. Although he’s previously had a hard time growing vegetables, there’s hope if trees come down that he might find more success. He has three sons and one daughter, in addition to another son that he lost many years ago. Pavia said that his daughter usually brings lime to his house to sweeten the soil for his flowers around this time of year.

Chatting outside as the roof repairs continued on, Collins mentioned that he’s going to bring the tiller over soon so that Pavia can get his plants in the ground this year again.

“Thank God for him,” Pavia said. “I don’t know what I would have done without him.”