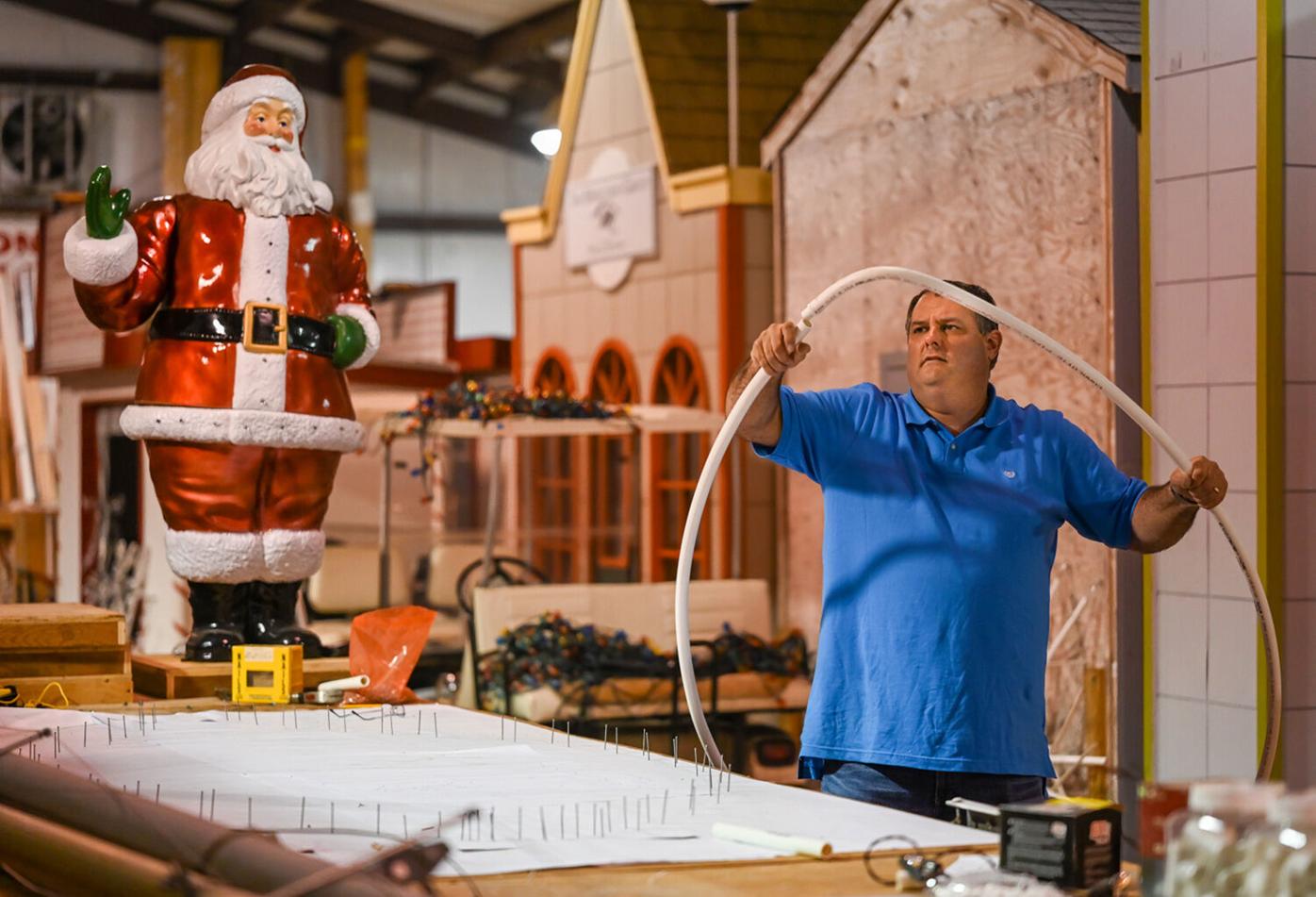 Winter Wonderland Board Chairman Bob Machowski, of Scituate, bends PVC piping into the shape of a giant Christmas Tree light bulb on Nov. 4, all under the watchful eye of a certain red-suited toymaker 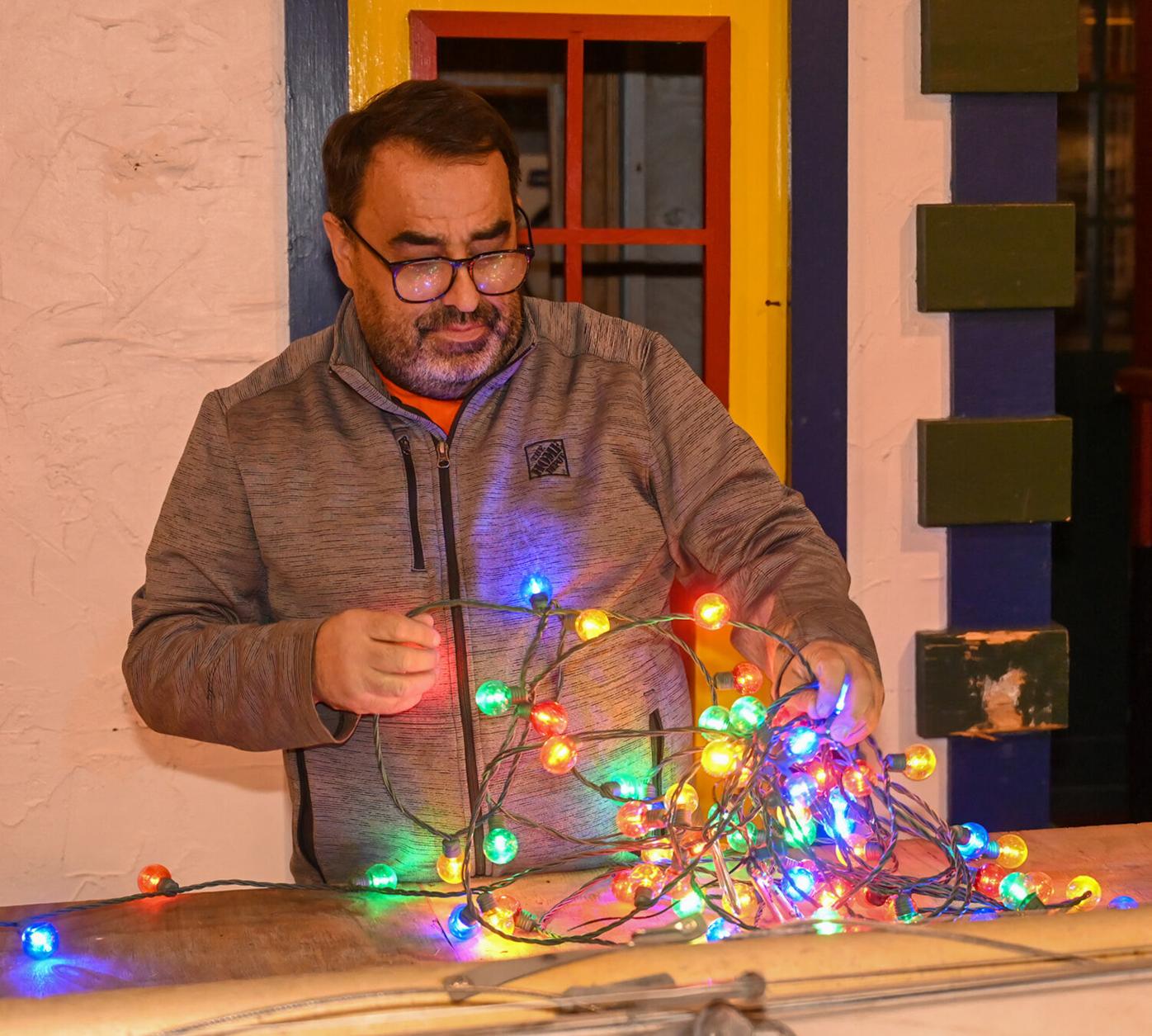 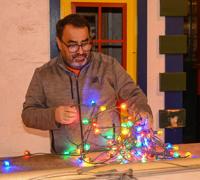 Volunteer Walter Mota checks some of the thousands of lights that will be lit during this year’s Pawtucket Winter Wonderland.

Winter Wonderland Board Chairman Bob Machowski, of Scituate, bends PVC piping into the shape of a giant Christmas Tree light bulb on Nov. 4, all under the watchful eye of a certain red-suited toymaker

Volunteer Walter Mota checks some of the thousands of lights that will be lit during this year’s Pawtucket Winter Wonderland.

PAWTUCKET – After a year with trees and lights but no real festivities, all the warmth of the holiday season at Slater Park returns in December, with Winter Wonderland set to draw crowds once again.

Dawn Goff, the key person behind the event each year, said organizers are excited about the festival portions of Winter Wonderland returning, including entertainment under the tent, after some question about whether they would be able to proceed.

A far larger question, she told The Breeze, was whether they’d be able to land the 650 Christmas trees they needed for the event, where people decorate trees in memory of loved ones. The company Winter Wonderland typically uses couldn’t do it amid ongoing shortages, she said, but they were able to finally find another company to provide the trees.

“We’re paying much more than we usually pay,” she said, “but at least we got them.”

People have been very understanding of the need to raise fees from $30 to $40 as a result, said Goff, who noted that they might be able to bring that fee back down again in future years.

Visitors will be asked to wear masks only in the carousel, and the only other place where a sign will be up asking visitors who haven’t been vaccinated to wear a mask is in with Santa, said Goff.

The famous “tree day” setup is planned for Dec. 2, two days before Winter Wonderland opens on Saturday, Dec. 4 with a 4 p.m. Santa parade inside the park. Organizers have again asked official Winter Wonderland meteorologist Kelly Bates back, said Goff, despite the fact that she’s no longer with NBC 10, remains extraordinarily popular.

“She walks in a restaurant and people stand up and clap for her,” she said.

Frances Slade, Winter Wonderland’s Mrs. Claus for some 20 years, died in January, and organizers made the easy decision not to find anyone to replace her this year.

Winter Wonderland participants should be receiving letters about their trees this week and next.

Winter Wonderland festivities run Dec. 4-5 and Dec. 11-12, from 4 to 8 p.m. each evening. Billed as a fun family event, the display is open for viewing from Dec. 5 to Jan. 1. There are 650 decorated Christmas trees, 20 Victorian houses, numerous light displays on the ground and in the trees, and The Night Before Christmas Lane. Volunteers are busy building several new displays for this year, including a new light tree as visitors enter Slater Park from Newport Avenue.

In 2019, when Winter Wonderland moved to 650 trees, organizers thought they might get the world record for most illuminated trees at one event, as up to then the record was around 550 trees, says Goff. But two other groups subsequently upped their game and the largest display of illuminated Christmas trees, consisting of 797 trees, was achieved by Mason County in Shelton, Wash., on December 7, 2019. The state of Washington is therefore listed as the tree capital of the world.

This year’s tree day will again be streamlined, with everyone spread outside in rows, because people liked that so much last year, said Goff.

In 1999, two women had an idea to create a Christmas event to be held in Pawtucket’s Slater Memorial Park. The idea grew into Pawtucket’s Winter Wonderland. With the approval of the mayor at the time, James Doyle, a volunteer group was recruited and Winter Wonderland was formed as an organization in conjunction with the city. The event, held the first two consecutive weekends of December, has continued to grow, with a waiting list for memorial trees each year.

“Our goal is to provide a place where children and families can come to enjoy various holiday related activities at an affordable price,” say organizers.

Find Pawtucket’s Winter Wonderland on Facebook for updates on this year’s event.