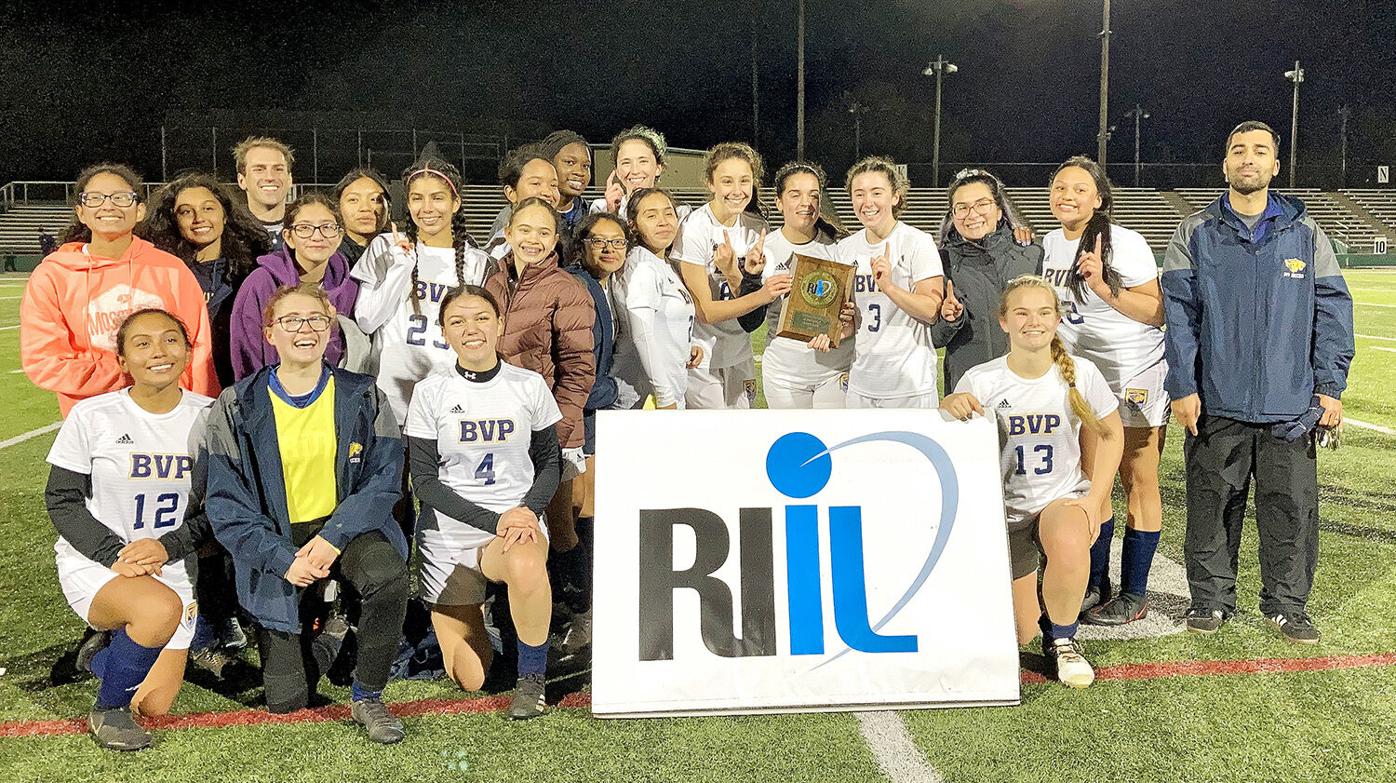 The players and coaches on the Blackstone Valley Prep girls’ soccer team proudly pose for a picture with their school’s first RIIL championship plaque after defeating the Lincoln School, 1-0, in last Saturday night’s Division IV title game at Cranston Stadium. 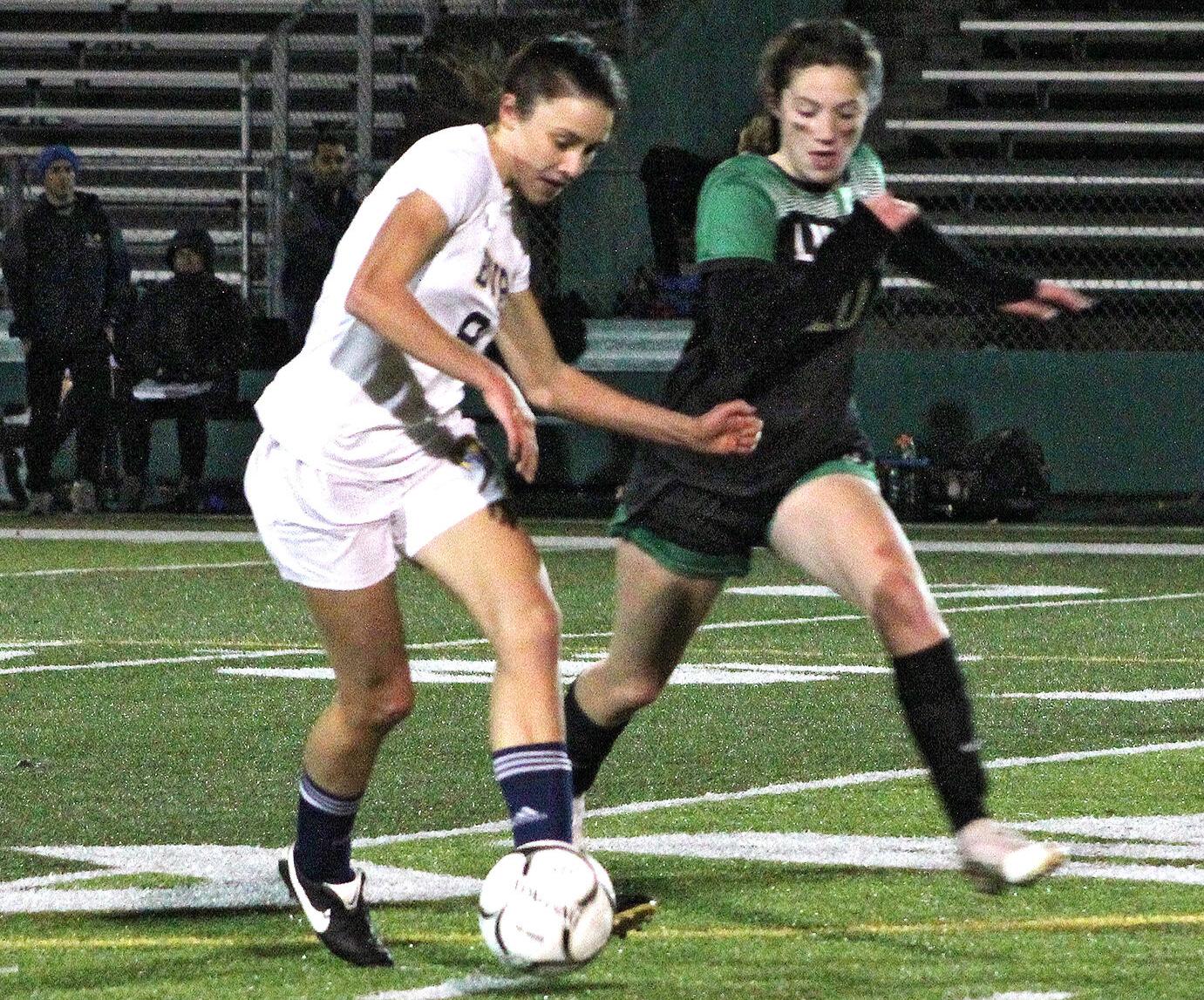 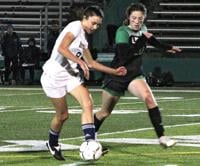 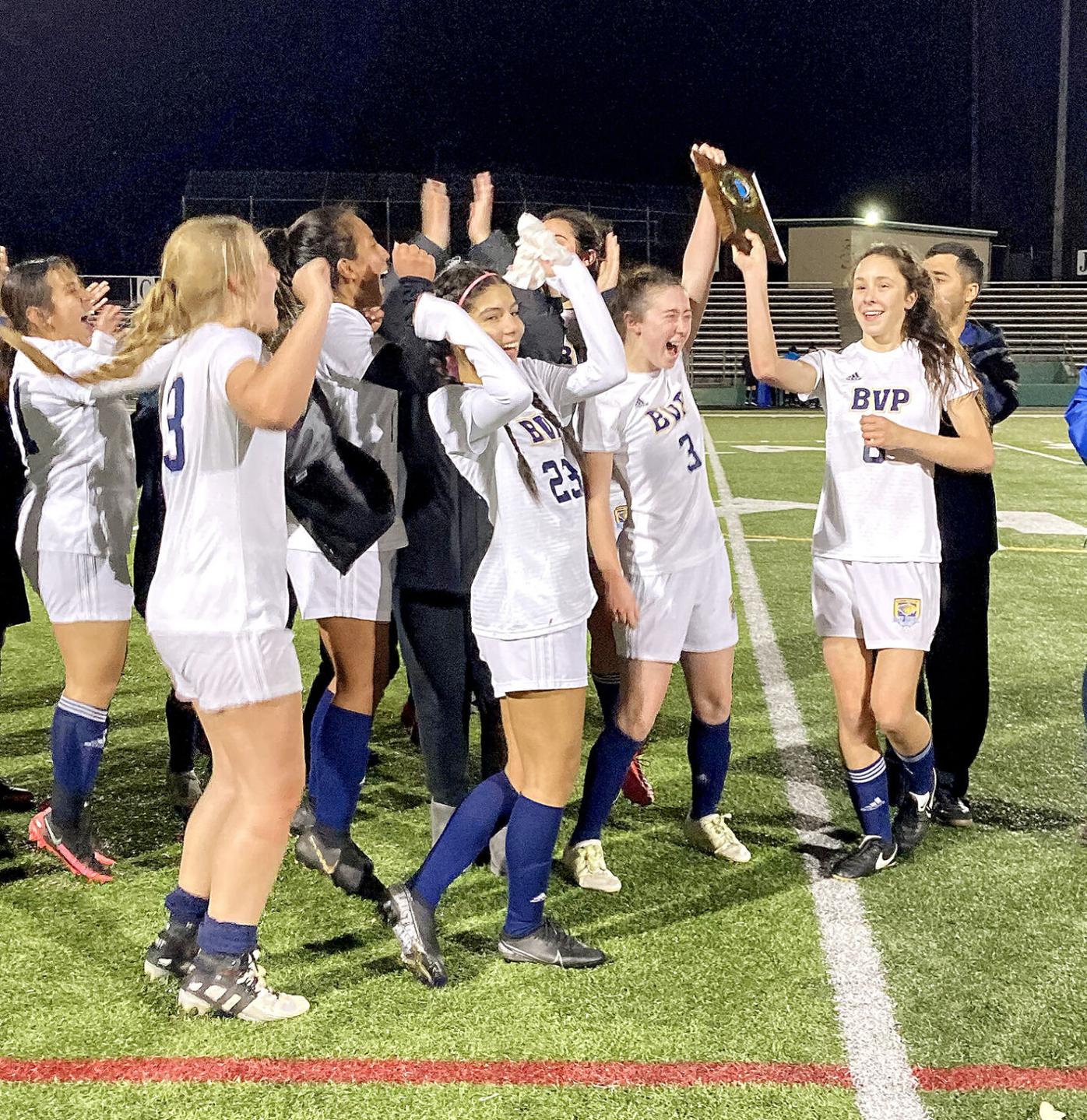 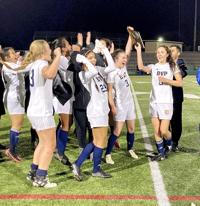 The players and coaches on the Blackstone Valley Prep girls’ soccer team proudly pose for a picture with their school’s first RIIL championship plaque after defeating the Lincoln School, 1-0, in last Saturday night’s Division IV title game at Cranston Stadium.

CRANSTON – In the end, last Saturday night’s crazy weather delay, nor a tough battle against an undefeated team, did not affect the Blackstone Valley Prep girls’ soccer team in its bid to win its school’s first RIIL championship, as the Pride shut out the Lincoln School, 1-0, in the Division IV finals at Cranston Stadium.

The title game, which was scheduled to kick off at 5:30 p.m., was the last in a hectic day that saw the RIIL crown its four girls’ soccer champions, and it began well past 7 p.m.

In the Division II finals, a late Chariho goal tied up the game against Prout, forcing two overtime sessions and eventual penalty kicks, but the OT periods were delayed, as wicked weather stormed through Rhode Island, fraught with rain, lightning bolts, high winds, and even some tornado warnings.

Having already arrived at Cranston Stadium, the Pride’s players said that the wait to take the field added to their anxiety.

“And it was a lot of anxiety,” senior midfielder and captain O’Livia Lopes said. “It built it up more, and there was a lot of anticipation throughout the team. I’m just happy we got to finish well.”

Another unique factor to add to the game was senior captain Lucy Noris, who started her day in Thetford, Vt. In her four years at the school, she had played on the soccer team and ran for the Pride’s cross country squad. She competed in that morning’s New England Championships and placed 63rd out of 259 runners.

She said she was in a hotel last Friday night that was about an hour away from the race at Thetford Academy. She raced around noon and then hopped in a car and took the long drive to Cranston. She got to the stadium when she needed to be, but then got caught up in the delay.

“The race went well,” she said. “It was a cool experience. I’ve never done something like that before. I tried to rest up until the game (began) in the car. I tried to massage my legs and stuff. Today, it was so great to win and finish it off. It’s awesome. I’m so happy for our team.”

The first half of last Saturday’s game was cold, windy, and scoreless, as neither the Pride (12-1-1) or Lynx (11-1-2) could capitalize on their opportunities. BVP head coach Steven DaRosa said that at halftime, the coaches told their players “to just keep going and it will come.”

And it came, about 23 minutes into the second half, as the Pride, who are in their sixth season as an RIIL team, took advantage of a free kick and Lopes scored the lone goal of the night.

“It was a free kick, the ball fell down, and (Lopes) did what she did all season and just ripped the shot,” DaRosa remarked. “She was confident and had a great game today, not just with her goal, but with her effort and her hard work.”

As for winning the championship, “It feels really surreal right now, but I feel really good,” he said. “This whole season, we’ve worked hard to get where we are right now, and it’s our first championship at the school, so that’s really awesome.”

The Lynx started pressing late in the game and had a few opportunities to tie it up. Anna Peletier took a free kick that went over the net, and Gracie Hall also put a shot on net, but in the end, the Pride and keeper MacKenzie Pawson held on for the shutout.

“MacKenzie has improved so much over the last few years and she’s built her confidence up,” DaRosa said. “We talked about how this turf is wet and we saw a moment of hesitation there. It was a little nerve-racking on the bench. But she was in good position and she has done great for us this year.”

As for the weather delay, “we didn’t know if we would end up playing or not,” Noris added. “But we were glad we played and we won, and it turned out good. We stuck through. No matter the weather, we still did what we came out to do.”

Winning was fun, but to bring the first title plaque back to their relatively new school made it that much more special.

“We talked about it,” DaRosa said about BVP not having a title yet. “I didn’t want to put that much pressure on them, but they embraced it and they did it. They brought home the first title. I’m extremely proud of them. Even before the game, I told them that this one game doesn’t define the whole season.”

Noris reflected how cool it was to run in the New Englands and then help her team win its school’s first RIIL championship.

“I’m glad I did it,” Noris said about competing in both fall sports. “It was a cool opportunity to be able to do that at my school and I’ve gotten a lot out of it. And to be able to finish this off, to be able to go to New Englands and then win this whole thing is very cool, and as a senior, it’s awesome.”