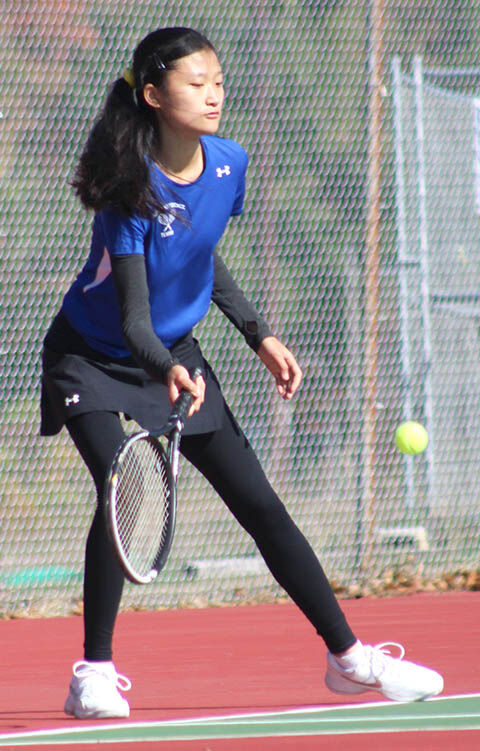 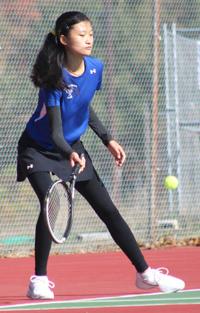 North Providence senior Paula Zhuang, who posted a 5-1 mark that was the best record on last year’s team, entered this week with a 3-0 record in helping the Cougars win two of their first three Division II matches of the season. The Cougars will visit Woonsocket on Thursday and host Portsmouth the following afternoon. (Breeze photos by Eric Benevides) 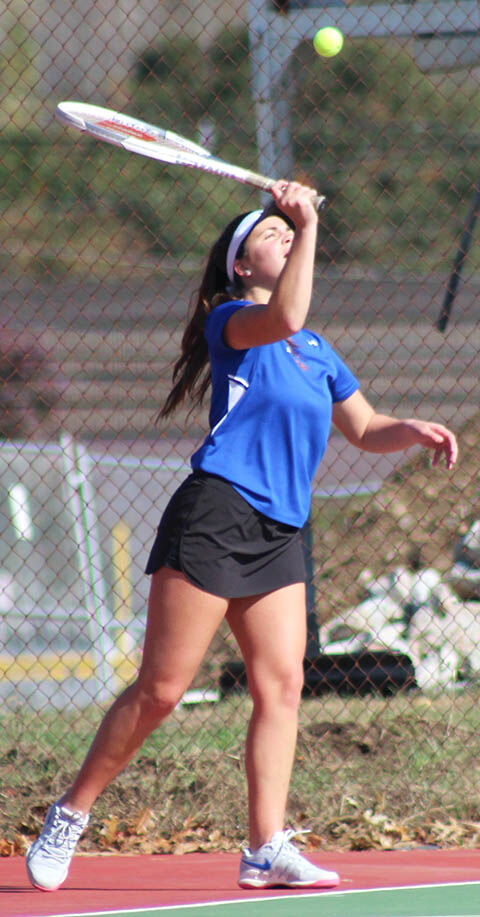 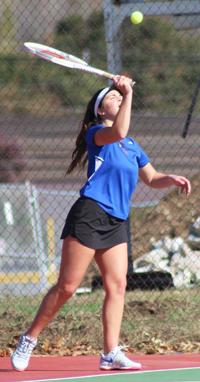 North Providence senior Paula Zhuang, who posted a 5-1 mark that was the best record on last year’s team, entered this week with a 3-0 record in helping the Cougars win two of their first three Division II matches of the season. The Cougars will visit Woonsocket on Thursday and host Portsmouth the following afternoon. (Breeze photos by Eric Benevides)

As for the other eight years? They were spent in the state’s second division, and not only did the Cougars average just 3½ victories per season, but they never reached the postseason.

But with a veteran lineup that includes eight returning starters from a squad that went 3-3 in Division II-North play and nearly earned a playoff berth, the Cougars are hoping they can build on that success this year, put together a winning record, and land that elusive D-II postseason berth.

Last Saturday morning in their home opener at the Olney Park courts, the Cougars improved their young record to 2-1 by rolling to a 6-1 triumph over Rogers, as they pitched 6-0, 6-0 shutouts in three of their matches and won two more by 6-0, 6-1 scores.

“We’ll see what happens this year,” noted Rubino, who is beginning his 33rd season as a head tennis coach, with the first two spent at Bay View Academy. “Last year, we only played the northern teams, but this year, we’re playing everybody.”

“And in all the years I’ve been here, this is by far, from top to bottom, the strongest division we’ve ever been in,” he added. “You have a bunch of teams that were in D-I for years, like Westerly, Prout, and Mount Saint Charles, and then you have Middletown, Portsmouth, and Narragansett, who have won the D-II title. It’s a very tough division.”

Rubino welcomed another superb turnout to this fall’s squad, with 35 players on his roster, and he’s also welcomed a new assistant coach, Dean Garganese, to the program. Garganese, who spent 21 seasons as the Cougars’ head baseball coach before stepping down after the 2019 season, takes over for David Centracchio, who retired from coaching.

The Cougars’ top four singles players are back, with senior Olivia Fontaine back atop the lineup and in her fourth year as a starter, sophomore Stephanie Jordan at number two, senior Paula Zhuang at number three, and senior Alena Rizzo at number four. Zhuang, whose 5-1 mark led the way on last year’s team, and Rizzo are three-year starters who entered this week with 3-0 records.

In first doubles, junior Graycen Pappas is back and joined by freshman Isabella Cardarelli, who “has a lot of potential,” reported Rubino, and the second doubles team of junior Eva St. Germain and sophomore Maria Fontaine has also returned.

Also back in third doubles is senior Cristina Alcala, who cracked the starting lineup late last season, and she is joined by senior Linda Guo, but seniors Gabriella Fiore, Karla Guzman, Juliana Hoyt, and Leandhy Williams, and junior Jillian Dufault could all see action in third doubles over the course of the season.

In last weekend’s triumph over the Vikings, Jordan, Rizzo, and the doubles squad of Maria Fontaine and St. Germain supplied the 6-0, 6-0 victories. Zhuang and the tandem of Alcala and Ruo only lost one game in their matches, and also netting a 6-2, 6-2 victory was the team of Pappas and Cardarelli.

The Cougars, who were scheduled to host Westerly on Tuesday afternoon, will visit Woonsocket on Thursday at 3:30 p.m. at the Villa Novans’ Aylsworth Courts and host Portsmouth the following day at 3:30 p.m.