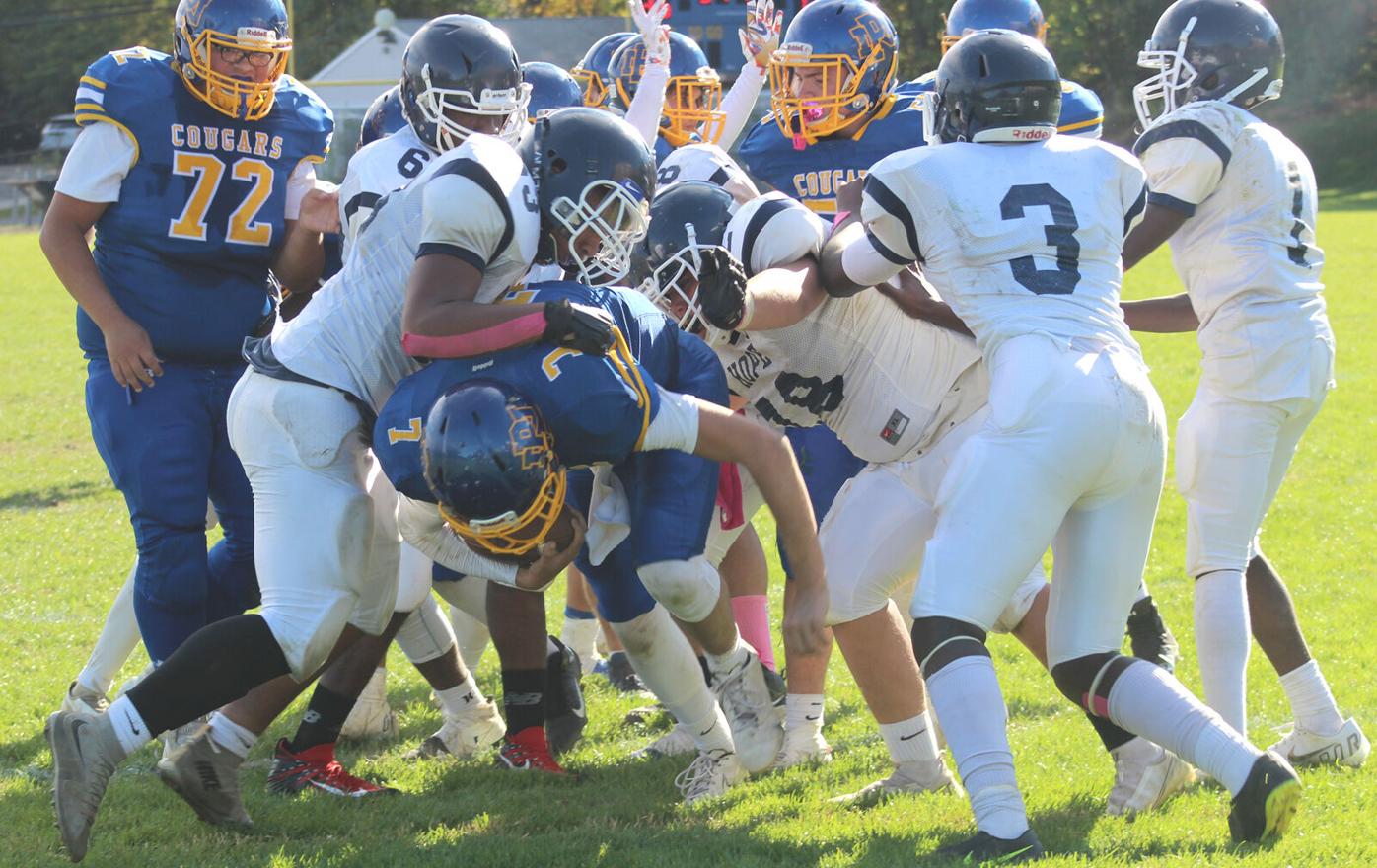 North Providence senior quarterback C.J. Almagno, #7, barrels through two Hope defensive linemen and into the end zone on a one-yard touchdown run with 48.6 seconds to play in the third quarter of last Saturday afternoon’s Division IV football game on the Cougars’ campus. Almagno scored two TDs and threw a touchdown pass to help lead the playoff-bound Cougars to a 50-12 victory that raised their record to 4-2. 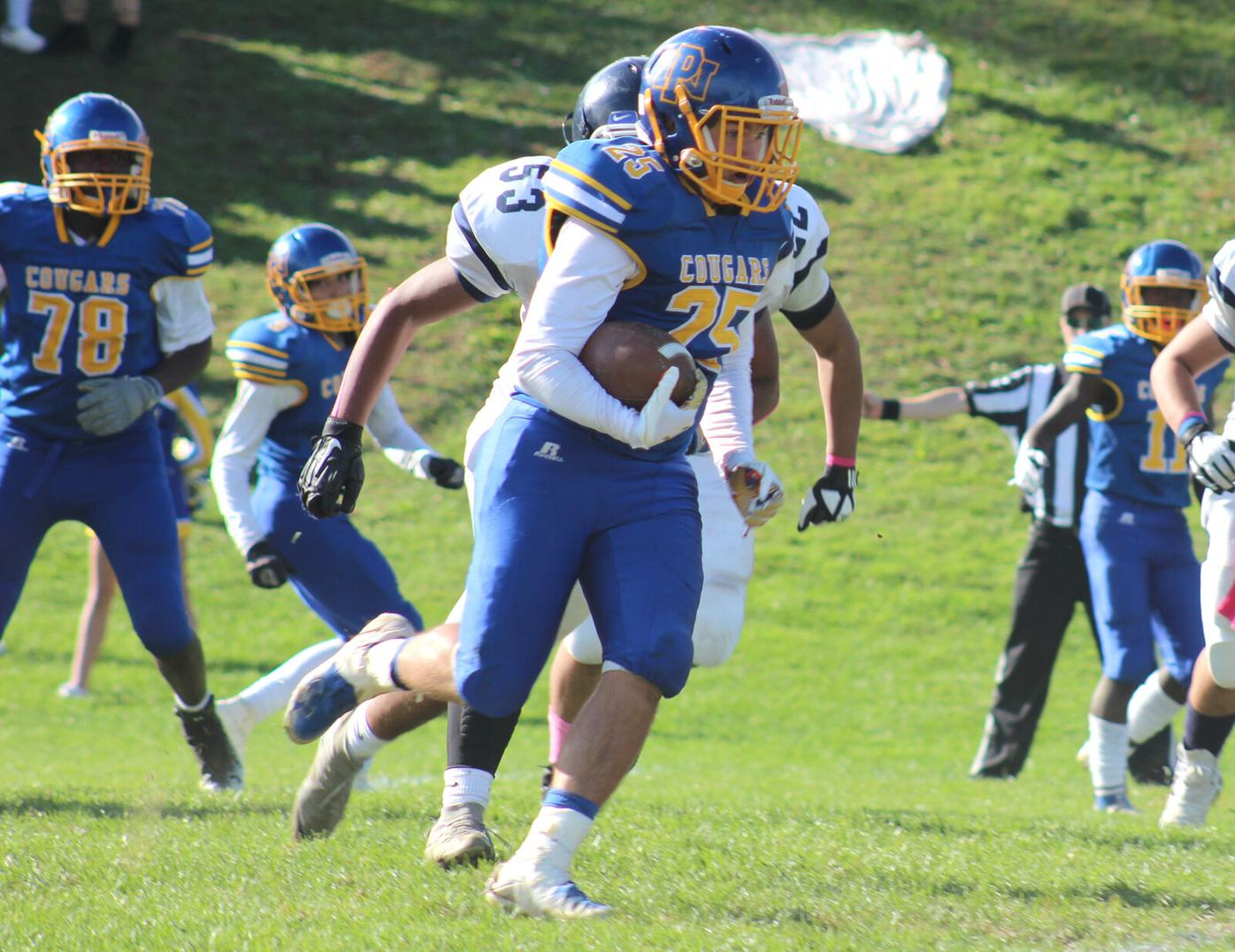 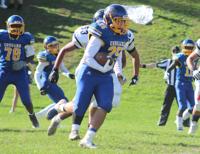 North Providence senior fullback William Wrage is off to the races on his way to the end zone on a 24-yard touchdown run 39 seconds into the third quarter of last Saturday’s 50-12 victory over Hope.

North Providence senior quarterback C.J. Almagno, #7, barrels through two Hope defensive linemen and into the end zone on a one-yard touchdown run with 48.6 seconds to play in the third quarter of last Saturday afternoon’s Division IV football game on the Cougars’ campus. Almagno scored two TDs and threw a touchdown pass to help lead the playoff-bound Cougars to a 50-12 victory that raised their record to 4-2.

North Providence senior fullback William Wrage is off to the races on his way to the end zone on a 24-yard touchdown run 39 seconds into the third quarter of last Saturday’s 50-12 victory over Hope.

NORTH PROVIDENCE — Homecoming Day games don’t get as entertaining as the one that the North Providence High football team enjoyed last Saturday afternoon.

Facing one-win Hope before a large gathering at Serio Field, the playoff-bound Cougars turned in an excellent effort on both sides of the ball and delighted their fans with a 50-12 victory that kept them tied for third place in the Division IV standings.

Now 4-2 and tied in the standings with the Juanita Sanchez/PCD/Wheeler co-op team, which they topped by a 7-0 score back on Oct. 1, the Cougars are hoping to overtake Smithfield (4-0) in the standings and land the second seed in next month’s playoffs.

NP will visit the EWG/Prout co-op team, which is in sixth place with a 2-3 mark, on Saturday at 1 p.m., and the following Friday at 6 p.m., the Cougars will host one-win Scituate in its regular-season finale.

If NP wins those two games and Smithfield drops its final two to undefeated Ponaganset (6-0) and the Juanita Sanchez co-op team, then the Cougars will take over second place because they will possess a better winning percentage than the Sentinels, who were unable to play fifth-place Davies (3-2) and EWG/Prout earlier this month because of COVID issues within their program.

Saturday’s victory over Hope was the third in a row for the Cougars, who racked up 263 yards of offense, limited the Blue Wave to 143 — with 42 coming in the game’s final minutes and the Cougars’ bench players on the field, and scored 50 points for the first time since their 59-17 win over Ponaganset on Sept. 16, 2017.

“It’s been a while since we put up that many points, so it was really exciting for (the players),” said NP head coach Glenn Williams. “Our defense has really been stepping up and playing well for the last three weeks, and our (offensive) line was driving their defensive line back, which I was very pleased to see. They were moving their feet and driving, and they made the right blocks.”

Despite the lopsided score, the Cougars only held a 23-12 lead at halftime, but in the first 39 seconds of the third quarter, they tacked on a pair of touchdowns to thwart Hope’s plans for a comeback.

Before the fans could get settled back in their seats, senior tailback Jevon Melendez returned the second half’s opening kickoff 80 yards for a touchdown. Moments later, Hope got the ball back on its 30-yard line, but Ndakpawaa pounced on a fumble in the Blue Wave’s backfield, and on the Cougars’ first offensive play, Wrage was nearly untouched on a 24-yard touchdown run up the middle.

The Cougars took a 7-0 lead 4:49 into the game on a two-yard touchdown run by Almagno and the first of six extra points kicked by junior Wahabu Kamara, and with one minute to go in the opening quarter, Wrage helped double NP’s lead with an 18-yard TD run.

While the Cougars and their fans were celebrating that TD, the Blue Wave quickly jumped on the board when junior Armani Carew returned the ensuing kickoff 75 yards for a touchdown.

However, the two-point conversion failed, and 1:28 into the second quarter, NP extended its lead to 21-6 on a crowd-pleasing 55-yard touchdown pass from Almagno to sophomore tight end Colin Roderick, who made a nice over-the-shoulder catch at the Blue Wave’s 30-yard line and outraced a safety down Hope’s sideline.

But Hope refused to call it an early afternoon. With 2:17 to go in the half, the Blue Wave cut the Cougars’ lead to 21-12 with another TD, and with 8.8 seconds on the clock, the Cougars saw a drive by the Blue Wave get snuffed out when Almagno got intercepted by a defensive back, who reeled in a batted ball at Hope’s four-yard line.

Instead of kneeling the ball in the remaining seconds and heading into the intermission down by nine points, the Blue Wave tried to run two plays. They lost two yards on an illegal procedure penalty, and on the half’s final play, Carew got tackled in the end zone for a safety.

In the second half, the Blue Wave turned the ball on all four of their possessions, and the final three ended on interceptions by juniors Vince Harris, Damari Gray, and Kaiden Andrade. The Cougars’ final two TDs came on a one-yard run by Almagno with 48.6 seconds left in the third quarter and a 30-yard touchdown run by Kamara on the second play of the final quarter.