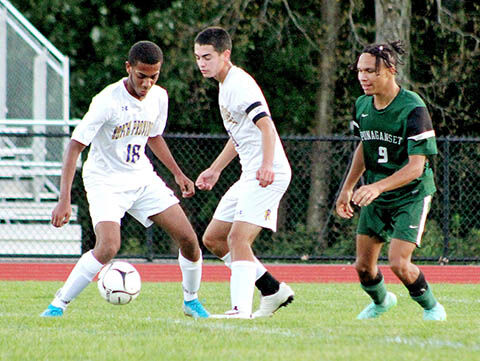 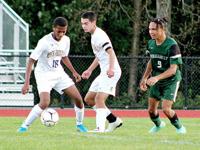 North Providence High School senior forward #18 Juan Acevedo, left, and teammate junior midfielder #30 Nico Upegui keep the ball away from Ponaganset junior midfielder #9 Addison Carty. Acevedo scored the go-ahead goal for the Cougars with under two minutes to go in the first half for the 2-1 advantage. The Cougars topped the Chieftains 4-1 last Tuesday. (Breeze photos by Kayla Panu) 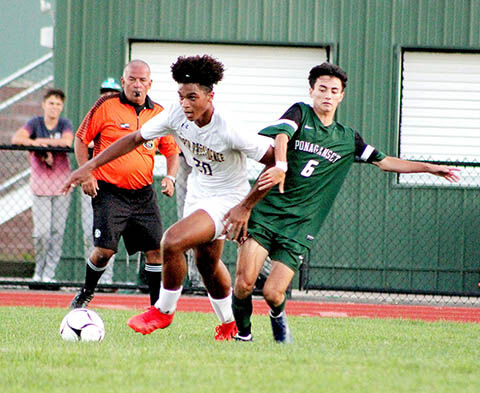 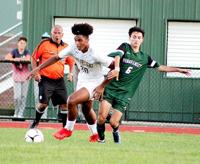 North Providence High School senior forward #18 Juan Acevedo, left, and teammate junior midfielder #30 Nico Upegui keep the ball away from Ponaganset junior midfielder #9 Addison Carty. Acevedo scored the go-ahead goal for the Cougars with under two minutes to go in the first half for the 2-1 advantage. The Cougars topped the Chieftains 4-1 last Tuesday. (Breeze photos by Kayla Panu)

GLOCESTER – The North Providence High boys’ soccer team started its Division III season on the right foot with a 4-1 victory over Ponaganset last Tuesday, Sept. 7, by scoring twice in each half. The host Chieftains scored their goal in the first minute and 20 seconds, but that did not deter the Cougars.

“We’ve kind of been preparing for that exact scenario, since we notoriously come out slow, and true to form, that’s how we came out,” North Providence head coach Chris Swiczewicz said. “They bounced back and really stuck to the gameplan. Once they kind of got into the flow, it really showed on the field. We were able to execute and tuck in a couple of goals before the half.”

After Nolan Allen’s goal for Ponaganset, the Cougars slowly started to put things together as did keeper Alex Carvalho.

“He did a great job,” Swiczewicz said about his keeper. “I think he was a little shaky at the beginning with that goal, but like everybody else, he really settled in and made a couple of good saves for us. For the most part, he just kept things calm, The kids have confidence playing in front of him and that goes a long way.”

Play was pretty even through the first half, but the Cougars kept picking up the intensity. With just over seven minutes to play in the first, Christian Ciotti scored the equalizer with a shot past Ponaganset keeper Alessio Heerera. The go-ahead goal came right after a North Providence corner with under two minutes in the first. Juan Acevedo found the ball in the commotion in front of the net and kicked it in.

Swiczewicz highlighted Acevedo, who is playing in the central mid position. He’s said Acevedo is going to be a key player for the Cougars.

The Cougars, after falling to Johnston in PKs in the D-III semifinals last season, return 10 starters this year, including captains Nico Upegui and Josh Sousa. Swiczewicz said that Upegui returns in the defensive central mid position and will be crucial for them.

“We were very blessed to go as far as we did last year and we have a very strong core coming back,” Swiczewicz said. “We lost our captain and our center back last year, but we have Sebastian (Celaya), who has kind of stepped into that roll as well and has really solidified the defense, along with returners Cody (Bryant) and Josh (Sousa) and Santino (Autiello).”

Swiczewicz also highlighted Bruno Teixeira, a junior, playing on the right wing. He said that Teixeira is going to be a solid player for them as well as a huge contributor.

The Cougars dominance over the Chieftains continued in the second half of last Tuesday’s game and they added another goal after just 10 minutes of play. Acevedo stole the ball from a Chieftain and got it up and into Ponaganset’s zone. As Nathan Nascimento went toward the net, Heerera came out to meet him, and Nascimento shot the ball by Heerera for the 3-1 lead.

Two minutes later, Ciotti took the corner kick and the ball ricocheted off a Ponaganset defender and into the net, giving the Cougars their three-goal advantage. The Cougars held on the rest of the way for the win.

“It always feels good,” Swiczewicz said about winning the first game of the season. “It’s a slow build to the playoffs, but it’s always good to get the first win under your belt and start to build that momentum.”

After a mask-filled, COVID-shortened season last year, they Cougars are excited to play a full schedule and get back into the playoffs.

“We went to the semis last year in a very awkward season,” Swiczewicz said. “Returning 10 starters, I think anything short of a return to a deep playoff run would be disappointing. These kids are determined. They’ve tasted that playoff success and I think they’re hungry for it.”

Game two was at Providence Country Day on Monday, and the Cougars will host Rogers tonight at 6:30 p.m.