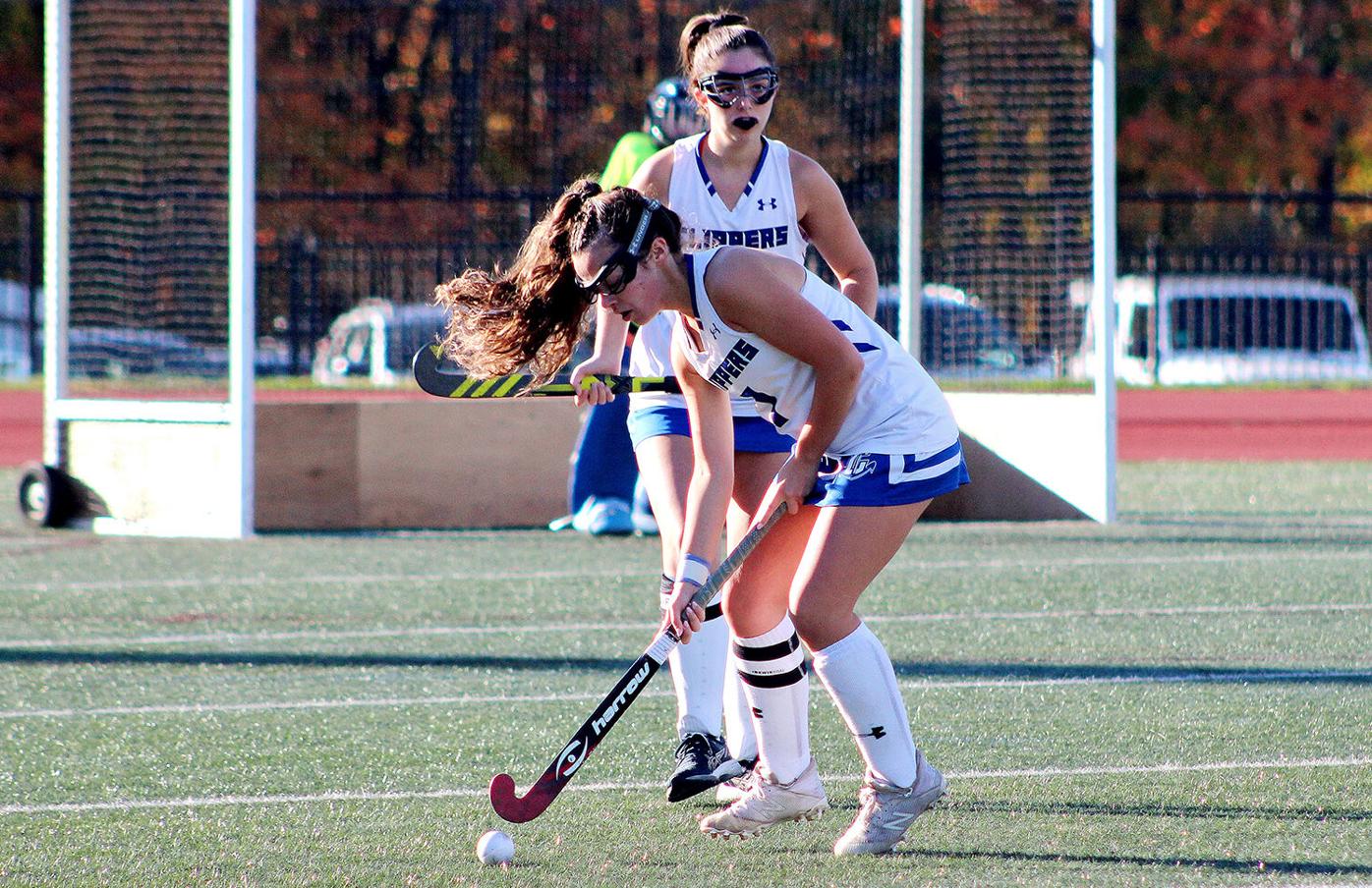 Cumberland High School senior field hockey captain #7 Jenna Hooper has space to make a pass. Behind her is senior captain #22 Rachel Walmsley. Hooper took all of the penalty corner shots and set up teammate Katie Galgay for her goal in the first quarter. 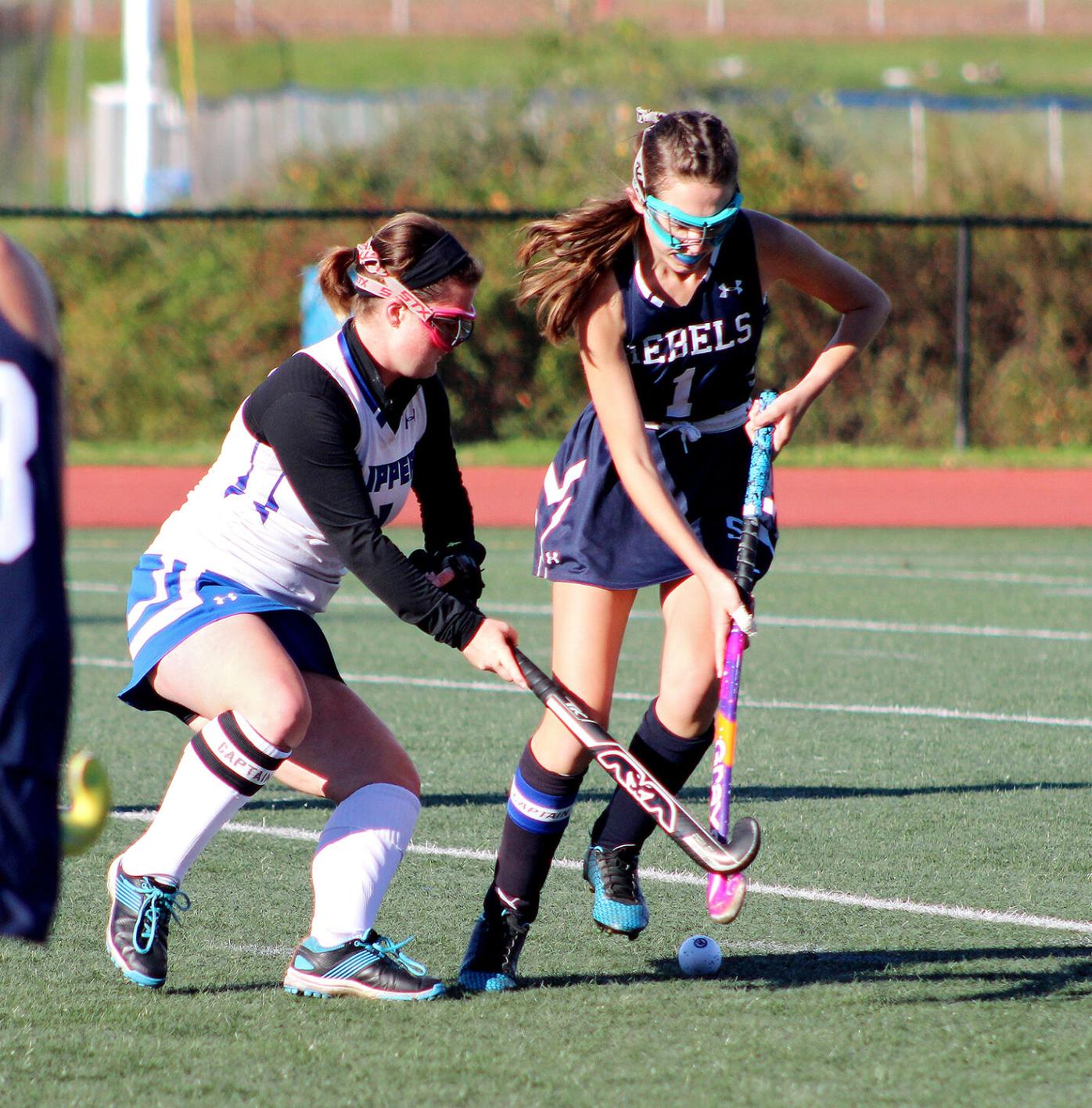 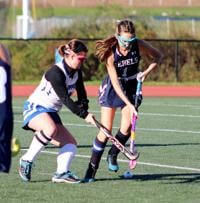 Cumberland senior captain Sophia Ziniti, left, and South Kingstown’s Lauren Adams battle for the ball in the middle of the field during last Saturday morning’s game at Tucker Field. The Clippers posted a 1-0 victory that clinched the Division II regular-season title.

Cumberland High School senior field hockey captain #7 Jenna Hooper has space to make a pass. Behind her is senior captain #22 Rachel Walmsley. Hooper took all of the penalty corner shots and set up teammate Katie Galgay for her goal in the first quarter.

Cumberland senior captain Sophia Ziniti, left, and South Kingstown’s Lauren Adams battle for the ball in the middle of the field during last Saturday morning’s game at Tucker Field. The Clippers posted a 1-0 victory that clinched the Division II regular-season title.

CUMBERLAND – A “revenge game” was on tap for the Cumberland High field hockey team last Saturday morning at Tucker Field, as the Clippers picked up a 1-0 victory over South Kingstown in the final game on their schedule to clinch the Division II regular-season title.

The win was the fifth in a row for the Clippers, who ended up in first place for the first time since their 2015 championship season with an 11-2-1 record, and the victory came over a formidable foe that had reached last season’s D-II title game.

“It feels great to beat them,” Cumberland head coach Erin Gendreau noted. “It was definitely like a little revenge game for us, tying them 2-2 the first game of the season.”

Rewind to the beginning of the season, when the Clippers went down to South County for their opener with the Rebels on Sept. 11. They were up 2-0, but allowed the Rebels back into the game in the fourth quarter and were forced to settle for their 2-2 tie.

From there, the Clippers only lost twice, 1-0 to Burrillville on Oct. 5, and 2-1 to Pilgrim on Sept. 23. Earlier last week, they rolled past Pilgrim and Smithfield by 4-2 scores, and last Saturday, they clinched the title by a point over Burrillville (11-3) and two over S.K. (10-3-1) in the standings.

The Rebels got the ball to start last Saturday’s game, but that didn’t matter to the Clippers. Their defense kept the Rebels away from their side of the field, especially in the first half.

And the Clippers capitalized on the first of their 10 penalty corners with a little over eight minutes to play in the first quarter. Senior captain Jenna Hooper’s corner turned into a free-for-all in front of the Rebels’ cage, but in the end, junior Katie Galgay scored the Clippers’ goal.

“I play pads, so I stand on the goalie, and then if they pass to me, I shoot it right in and try to get a goal,” said Galgay, who scored an overtime time in a 2-1 win over Tiverton on Sept. 18. She added, “We have an amazing defensive team and I think that’s what stopped (S.K.).”

With just over a minute left in the game, the Rebels got the ball into the Clippers’ end. Maeve Kirwin took the corner, but it was quickly blocked by the Clippers. The Rebels kept possession and stayed in CHS’s territory the rest of the way until Galgay cleared the ball as the buzzer sounded.

The Clippers have posted their share of memorable victories during their outstanding season. In a 2-0 win over Lincoln on Sept. 21, they received fourth-quarter goals by Galgay and senior captain Sophia Ziniti, and in a 3-2 victory over previously-unbeaten Burrillville eight days later, Hooper provided the heroics by scoring her second goal of the game in the final minutes.

In the Clippers’ 4-2 victory over Pilgrim last Thursday, Ziniti produced a pair of goals, Hooper and Galgay added the other goals, and junior goalie Hannah Free stopped eight of the nine shots she faced.

The Clippers and the Broncos received a first-round bye in the six-team playoffs and will play in Thursday’s semifinals. Cumberland will battle the defending D-II champion, 4th-seeded Lincoln, which improved to 9-6 with its 3-1 win over 5th-seeded Pilgrim in Monday’s quarterfinals.

While the Clippers will host the rival Lions on Thursday at 6:30 p.m., Burrillville will take on the winner of Tuesday’s scheduled quarterfinal-round game between 6th-seeded Tiverton and the 3rd-seeded Rebels at 3:30 p.m. on its campus.

The championship game is Saturday at 1:30 p.m. at Cranston Stadium.