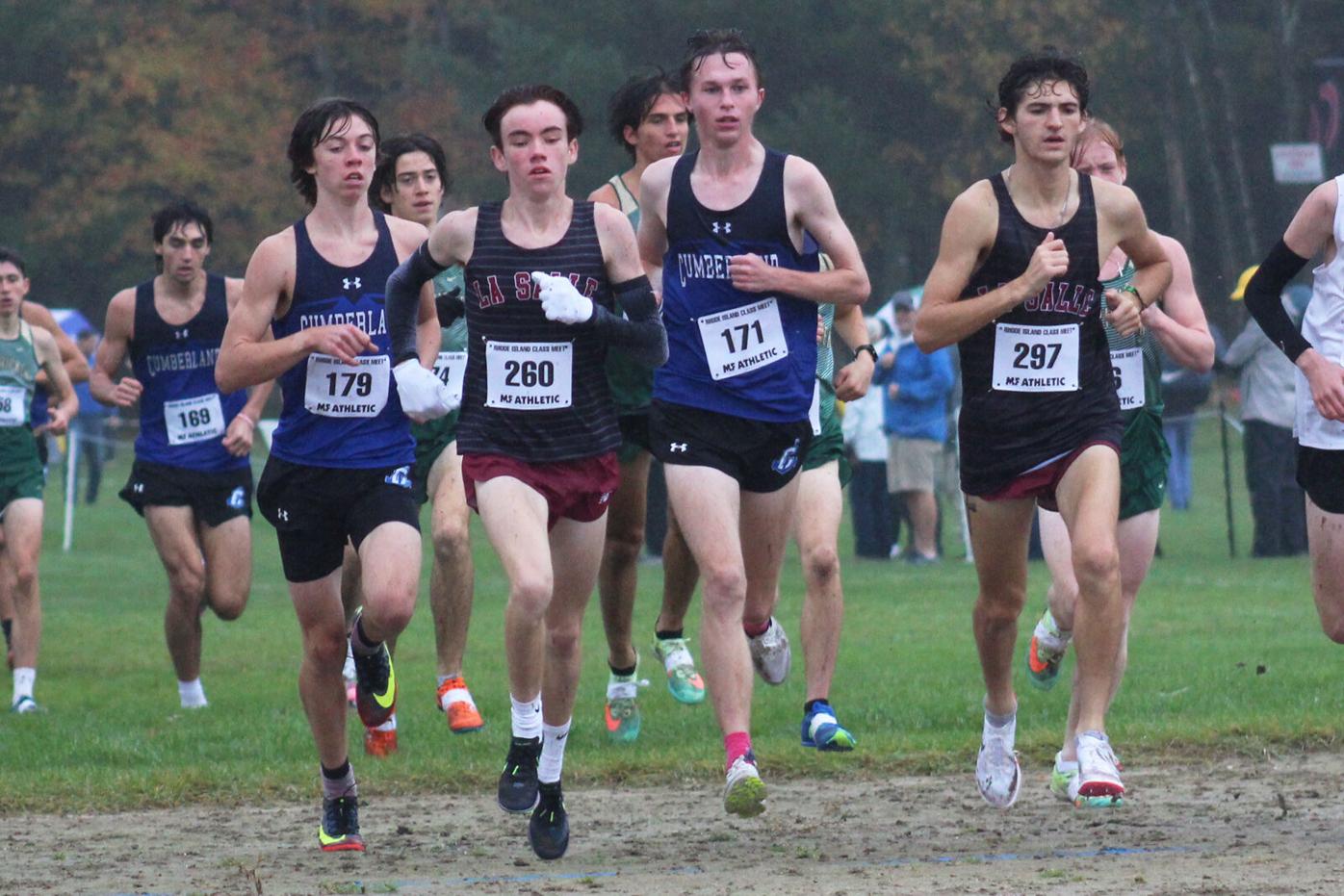 Five days after capturing the freshman state cross country title, Logan Halliwell took 14th place at the Class B meet in a time of 17:28.4 to help the Lincoln High boys’ team claim its first class championship since 2009.

Five days after capturing the freshman state cross country title, Logan Halliwell took 14th place at the Class B meet in a time of 17:28.4 to help the Lincoln High boys’ team claim its first class championship since 2009.

GLOCESTER – It’s been five long years since the Lincoln High boys’ cross country team placed among the top five teams at the Class B championship meet at Ponaganset High’s 3.1-mile course, but the Lions ended that drought in a very big way last Saturday afternoon.

And the Lions didn’t just break into the top five, they raced to the top of the pack and captured their first class title since 2009 with an incredible performance that saw them score 89 points to oust the defending champion, Chariho, by three.

Junior Nathan Evans continued his outstanding season by placing seventh out of 88 runners in a time of 16:26.2, and the Lions received top-20 finishes from freshman state champion Logan Halliwell (14th place, 17:28.4) and senior Ben Martins (16th, 17:35.1) that helped catapult them to their elusive title.

“We’ve very excited,” said second-year Lincoln boys’ coach Conor McCloskey. “We obviously have a very talented group of guys who are very dedicated. I think all year, we knew we would be peaking late, and it’s really nice to see all the training start to really pay off during the championship season.”

In order to win its title, the Lions not only had to outlast Chariho, which had finished in the top three in the last four Class B meets, but also 3rd-place South Kingstown (103 points) and 4th-place East Greenwich (106).

“I’m from the southern part of Rhode Island, and I know (Chariho) coach (Bill) Haberek very well,” remarked McCloskey. “They are all very good coaches down there, so anytime we can be in contention with any of those teams that have traditionally performed very well in these races, we’re really happy about that.”

“We win meets with our (numbers) three to six guys,” said McCloskey, whose team will turn its attention to Saturday’s RIIL Championships at Ponaganset – the boys will run at 3 p.m. and the girls will be in action at 2:15 p.m. “They’re a tight-knit group that just works really hard and understands the value that those (numbers) three, four, and five places play.

The good news for Lincoln continued in the girls’ race, as the Lions earned one of the RIIL’s six wild-card entries into Saturday’s state meet by taking sixth place with 164 points. It will be the first time since 2016 that Lincoln will appear on the RIIL’s biggest stage.

In the Class A meet, the Cumberland High boys’ and girls’ teams placed third in their respective races, and while the top two finishers in the boys’ race hailed from Cumberland, they did so sporting the colors of La Salle Academy, which won its third straight class title.

Senior Jack Casey, who plans to continue his running career at Columbia University, was the winner in a time of 15:50.6, as he topped his classmate, UMass-Amherst bound Adam Thobodeau (15:55.5), and North Kingstown junior Jackson Borge (15:57.8).

“I’m super pumped with how the race went,” said Casey. “I couldn’t be happier. We had a good group of guys in the first mile, but once we got uphill in the woods, it was just me and Adam side by side for the rest of the race.”

Included in that pack during the first part of the race was Cumberland High senor Henry Dennen, who ended up placing fourth in 16:05.4, and junior Cole McCue, who placed sixth in 16:17.8.

In the girls’ Class C meet that took place later in the day, Blackstone Valley Prep senior and Cumberland native Lucy Noris claimed second place in a time of 20:08.20. The winner was none other than Moses Brown junior phenom Sophia Gorriaran, who nearly took a wrong turn on the course in the opening mile, yet still turned in a winning time of 19:01.0.

The state junior varsity championship meets also took place, and Cumberland High sophomore Grace Belt was the winner of the girls’ race in a time of 21:16.8 that outdistanced the runner-up finisher by 35.4 seconds. The Clippers’ top runner in the boys’ race was freshman Sam Henderson, who placed third in 17:27.1.