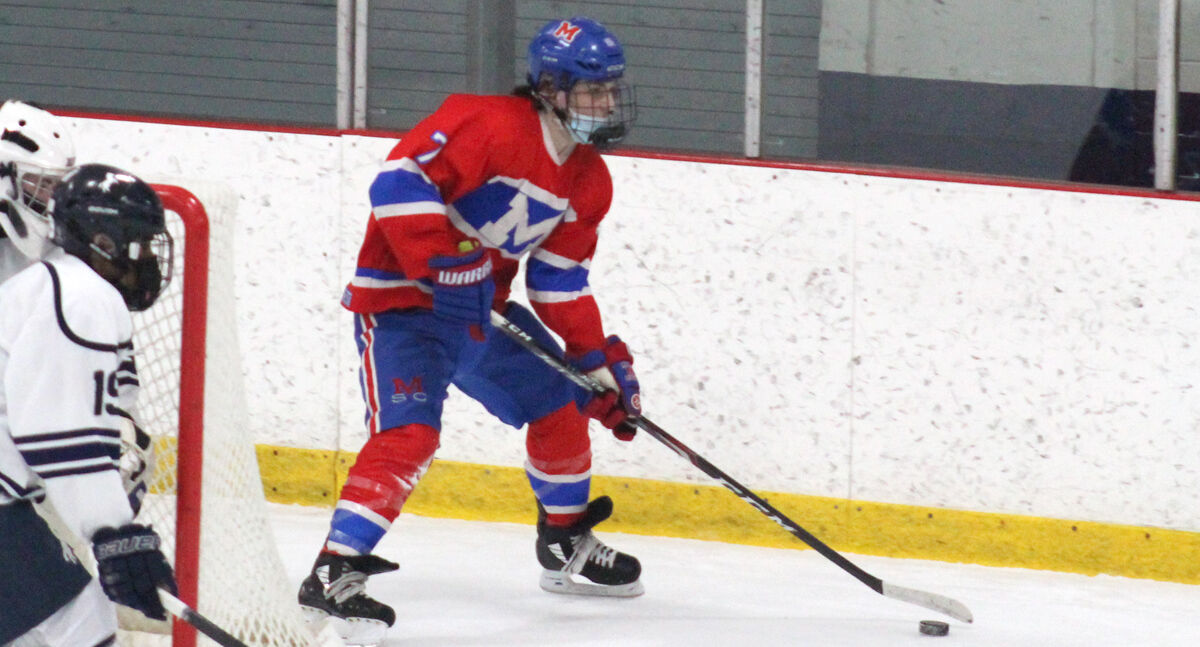 Senior forward Micaiah Bascombe, who was a Third-Team All-Division selection last winter, will lead Mount Saint Charles Academy into its season opener on Friday night against Burrillville High at Levy Arena. The Mounties skate into this season as the two-time defending co-state champions. 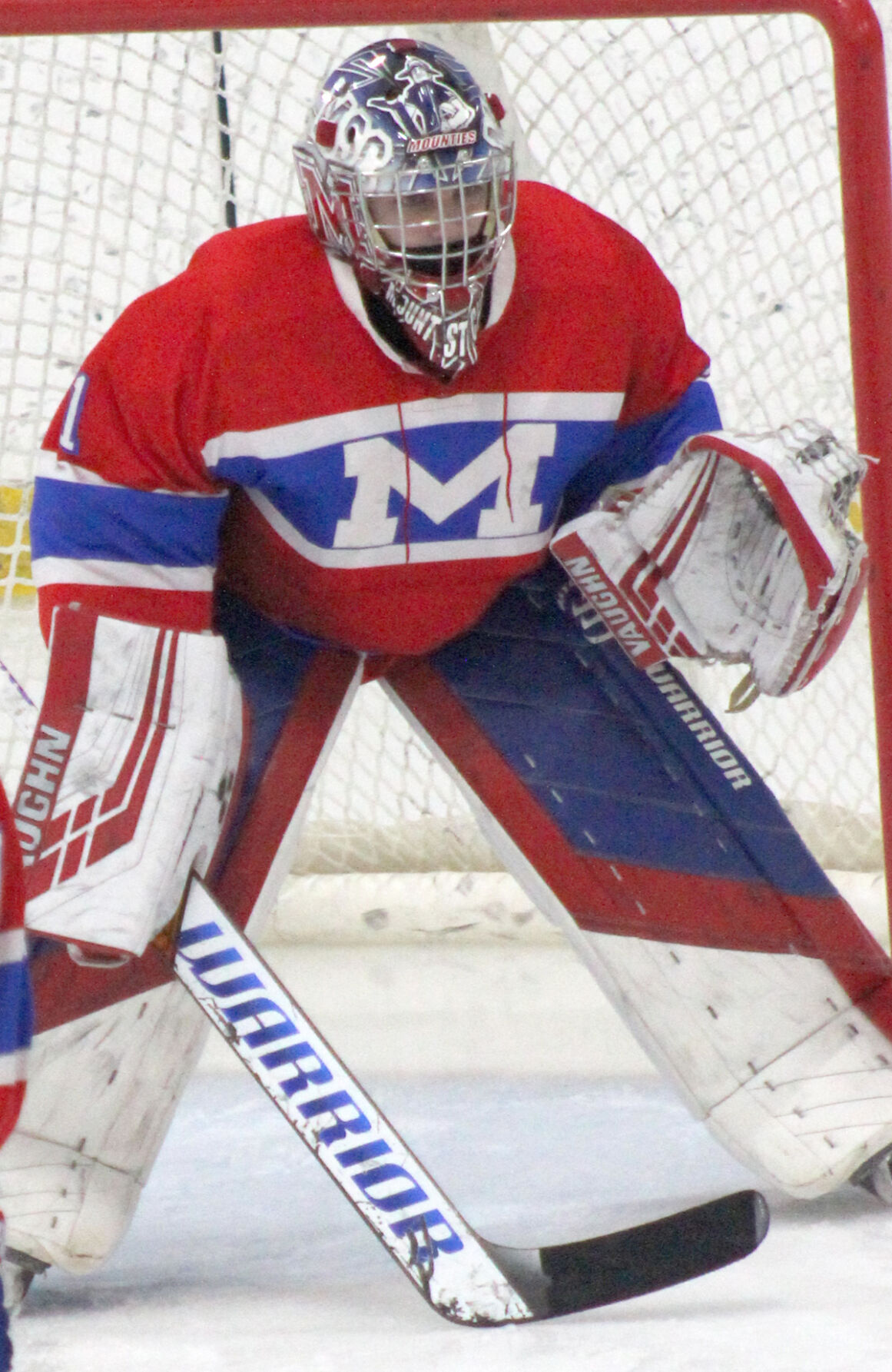 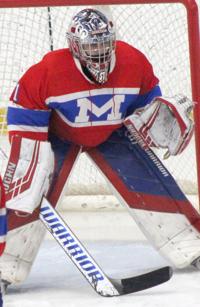 Senior forward Micaiah Bascombe, who was a Third-Team All-Division selection last winter, will lead Mount Saint Charles Academy into its season opener on Friday night against Burrillville High at Levy Arena. The Mounties skate into this season as the two-time defending co-state champions.

WOONSOCKET – The Mount Saint Charles Academy boys’ hockey team is skating into this season as the two-time defending state champions, despite never stepping foot onto the ice for a best-of-three championship game.

Two seasons ago, when head coach Matt Merten took over the program, the Mounties were scheduled to play La Salle Academy in the finals, but the COVID-19 pandemic shut everything down, including sports and schools.

Then last year, Mount had a few COVID cases as the finals were set to begin against Bishop Hendricken. Instead of taking sole possession of the championship, the Hawks decided to share the title with Mount.

It’s the first time in RIIL history that a team received a share of a state title in consecutive seasons, something which Merten calls “an interesting stat,” but this winter, the Mounties want to return to the finals and actually play those games in their bid to capture their third straight title, as well as the 47th in the program’s proud history.

During last season’s shortened schedule, the Mounties won the regular-season title with an 8-0-1 mark, rolled past Cumberland in the quarterfinals, and went the distance with La Salle in their semifinal-round series, which saw the Rams force a third game by evening the series with an overtime win.

“Last year was hard, but our leaders were tremendous,” Merten said about his senior captains leading a skate two days a week before the season started and continuing it, not knowing if there would be a season.

Merten is hoping his team will have more time to develop and gel this time around and have contact with their junior varsity team. And after graduating eight seniors, the Mounties’ underclassmen will have a larger role.

“We’re a younger team, but we still have a lot of good kids returning,” Merten said.

Senior Jason Mandeville, who was a First-Team All-State selection last winter, returns between the pipes for the Mounties. Merten said Mandeville was the best goalie in the state last year, and he will share the captain’s duties with returning senior forward Micaiah Bascombe, who was a Third-Team All-Division pick.

Then there are the eight incoming freshmen. Merten highlighted Connor Sousa and Luke Smolan, and he said the team has had great numbers coming up from the junior high school.

The Division I subdivisions have been mixed up this season. Mount resides in State Championship Sub-Division A with Prout, Burrillville, Pilgrim, and Smithfield, and Sub-Division B includes East Greenwich, Barrington, Hendricken, La Salle Academy, and Moses Brown.

There will be crossover games, so Mount will still face Hendricken and La Salle, but not as much as they have in the past.

Players will also continue to follow the RIIL’s COVID guidelines. Merten said masks are required in the rink and while playing, but they have gotten comfortable with them. They are hoping COVID will not be a factor this season, especially as they have been the team that had been the most affected by the pandemic.

There is also a busing shortage, so Merten said his players will drive to the games.

“The kids are really adaptable,” Merten said. “They just want to play.”

The regular season starts Friday for the Mounties, as they will visit Burrillville in a 5:30 p.m. game at Levy Arena, and from there, they will focus from week to week.

As for expectations, Merten said, “We want to improve as we go, and we always think we can compete for a state title. And we think we can do that. It also depends on how quickly we mesh together. And we need to be peaking at the end of the season.”

Over the past few years, Merten said Mount hasn’t been picked to end the season high, but they’ve proved their critics wrong for the last two years.

He said the upperclassmen have a good perspective and are hungry to compete for a title.

“We all want to have a nice, normal season and hope COVID doesn’t affect it,” he added.

In three weeks, the Mounties will host their 25th annual Mount Saint Charles Holiday Faceoff Tournament at Adelard Arena, and the three-day event, which wasn’t held last winter, will again draw some of the region’s top hockey programs.

The following day, a tournament skills competition at noon will kick off the schedule. The losing teams from Monday’s games will then face each other at 2 and 4 p.m., and the winning teams will skate at 6 and 8 p.m.