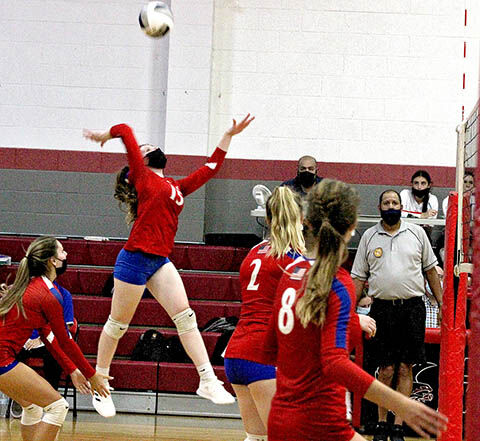 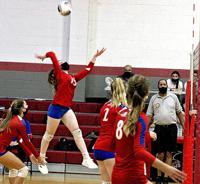 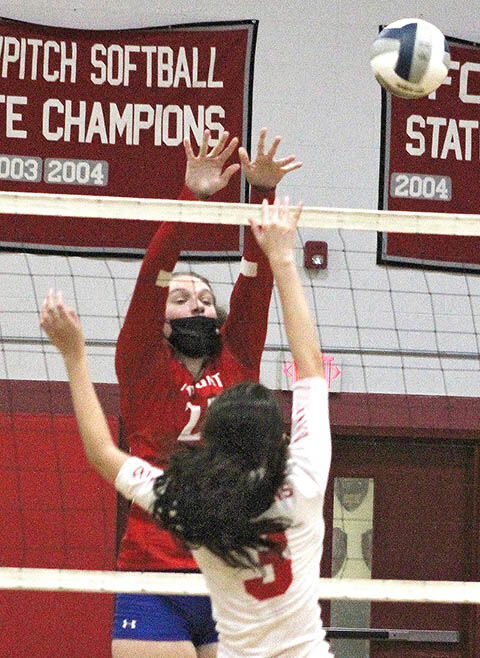 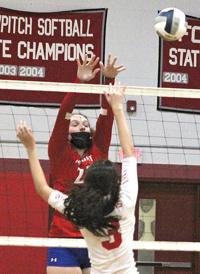 Mount Saint Charles sophomore Emma Roberts hits the ball over the net and over Cranston West’s Eve Anthony for the point during Monday night’s match.

Mount Saint Charles sophomore Emma Roberts hits the ball over the net and over Cranston West’s Eve Anthony for the point during Monday night’s match.

CRANSTON – After graduating a good amount of seniors this past spring, the Mount Saint Charles Academy girls’ volleyball team is trying to learn each other and find how to gel during the early portion of its Division I season.

After suffering a 3-1 loss to East Providence in the first volleyball match in the Townies’ new gymnasium, the Mounties were back on the road on Monday night, but dropped a 3-1 match to Cranston West.

“Unfortunately, we have a COVID contact, so one of our starters is out,” Mount head coach Josh D’Abate said. “Whatever sort of rhythm we’ve had at practices kind of threw it off. But we have to do a better job from coaching to executing. I have to figure out a better way to get our message across to do a good job of helping us execute.”

After dropping the first two sets, the Mounties started to play together and busted out a 26-24 win in the third set against the Falcons. Besides that, they dropped the first two and fourth sets, 14-25, 15-25, and 19-25.

“Defensively, their movements were better in games two, three, and four, but on the other side of that, we missed a whole bunch of serves; we missed five in the last game, and we lost by six,” D’Abate said. “You’re not going to beat any team no matter how good you are. If you’re always fighting from behind, you’re in trouble.”

By the third set, the Mounties finally took a lead and managed to hold onto it, despite trading serves the first few points. After the Falcons tied it at 10 points apiece, the Mounties went up on a bad serve by Cranston West.

Brooke Kempskie got her serve off for the point and Emma Roberts helped out on the next point for the 13-10 lead. They kept a slim lead until the Falcons tied it back up at 22-22. Cranston West went up once, 24-23, but the Mounties tied it, took the lead on Kylana Chauvin’s serve, and grabbed the 26-24 win.

D’Abate said he had no seniors on the floor against Cranston West, as Mallory Mongeon is out and Shailyn Kennedy is relatively new. He said they are trying to find the right time to get Kennedy in the game to be successful. They are both captains.

“Tonight, I had two freshmen and a sophomore on the floor basically the entire night and a bunch of juniors,” he said. “The room for growth is there. The inexperience is some of the mistakes that we are making. I think next week we will make less, and by the end of the season, we’ll make a lot less than we did today.”

“And that’s kind what we’re looking for, a little bit of growth through the season,” D’Abate added. “Hopefully those young players mature enough to eliminate some of those mistakes.”

The two most experienced players are juniors in Amanda Pierce, a three-year starter, and Morgan Marcos., and right now the juniors are leading the way, eliminating their mistakes early on, D’Abate said. He said that Pierce was good defensively and on her serve-receive against Cranston West, while Marcos is doing a good job at executing what should be done.

The volleyball last season was bizarre, having been played in the “Fall II” season, or right before spring sports officially started, with many COVID precautions. The Mounties squeaked into the playoffs, but lost to La Salle Academy in the quarterfinals. D’Abate is not thinking about last season, but trying to focus on how he can coach and make his team better now.

“They’ve all done a really good job, from coming back in February and March to now,” D’Abate said about his returning players. “But I think as a team, we have to learn how to gel. Realistically, we have four JV players that are coming to varsity for the first time, so those three varsity players that have experience are now mixed in with players who don’t. That’s not on them, it’s on me to try and figure out the recipe for success. We’ll figure it out and get there eventually.”

D’Abate added that they have high hopes for this season, but are focusing on getting better and staying healthy, trying to keep COVID away.

“If we can be competitive late and squeak in the playoffs, we’ve got enough experience to maybe make a run,” he said.

The Mounties were scheduled to host La Salle Academy on Wednesday night and then Cumberland next week.