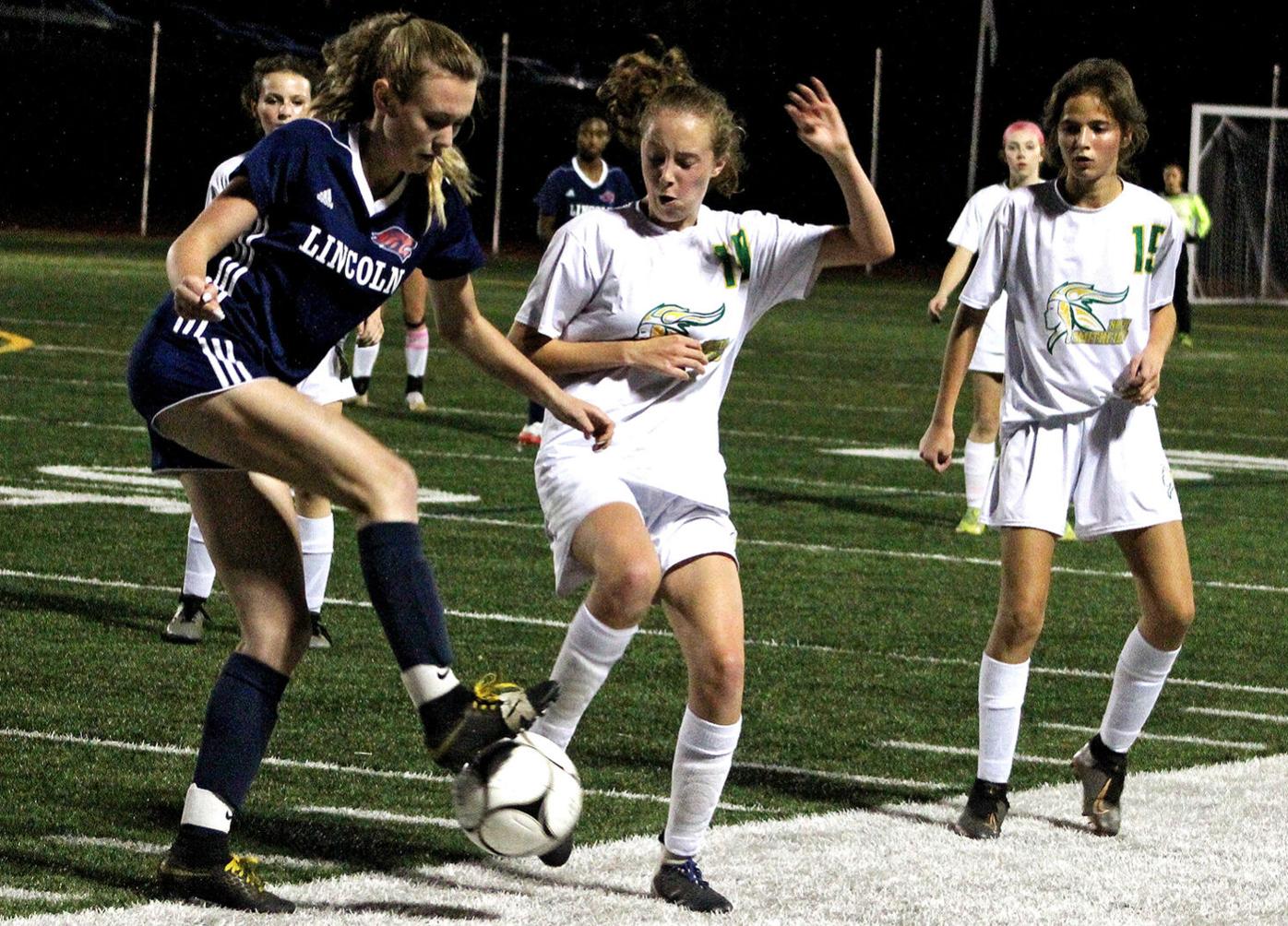 Battling for possession of the ball before it bounces out of bounds during the first half of last week’s Division II game are Lincoln High sophomore Skye Adam, left, and North Smithfield High freshman Frances Tiner, #10, while backing up the play is N.S. sophomore Ava O’Neill. The Northmen suffered a 2-0 defeat that saw the Lions score twice in the first six minutes of the second half. 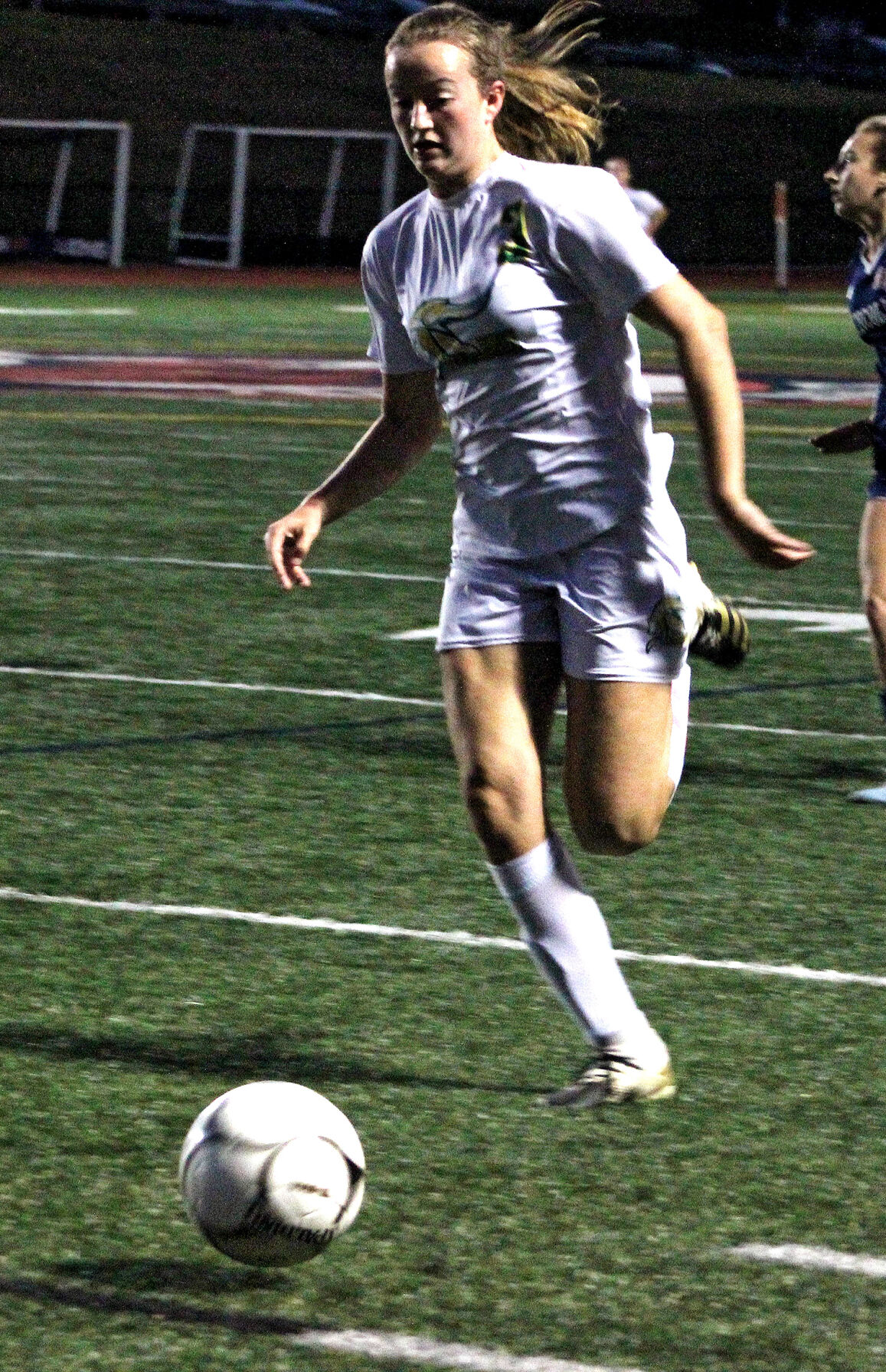 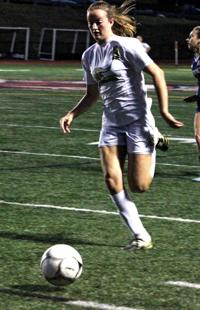 Battling for possession of the ball before it bounces out of bounds during the first half of last week’s Division II game are Lincoln High sophomore Skye Adam, left, and North Smithfield High freshman Frances Tiner, #10, while backing up the play is N.S. sophomore Ava O’Neill. The Northmen suffered a 2-0 defeat that saw the Lions score twice in the first six minutes of the second half.

LINCOLN – After notching an undefeated record in September and a four-game win streak during the first couple of weeks of October, the North Smithfield High girls’ soccer team’s season hit a minor speed bump last week.

The Northmen slipped into a tie for seventh place in the Division II standings after posting an 0-2-1 mark that dropped their record to 7-3-4.

After kicking off last week with a 3-2 loss to 3rd-place East Providence at the North Smithfield Elementary School complex, the Northmen were dealt a 2-0 loss to Lincoln last Wednesday night at the Lions’ Ferguson Field.

But the Northmen came back on Saturday afternoon to play the Prout School to a 1-1 tie in Wakefield, and that allowed N.S. to move into a tie for seventh with Mount Saint Charles Academy, which entered its scheduled match against Woonsocket on Tuesday with an 8-6-1 record.

No loss was as difficult as last week’s defeat to the Lions. After a scoreless first half, the Northmen saw Lincoln junior Allyson Cole score two quick goals in the first 5:16 of the second half and N.S. could not recover after that.

“We outplayed (Lincoln) in the first half,” N.S. head coach Nicole Higginbotham said. “I think we just got a little too complacent with how we played in the first half and kind of let our guard down a bit.”

“We played them last year, and we remembered their keeper (Amy Stevens) and how good she was, how big her punts were, and how she just dominated the box,” Higginbotham added. “We had been working on trying to switch the field quickly and keeping the ball on the ground like we do best, especially on turf.”

The Northmen usually jump at the opportunity to play on turf, but their home field has been going through a renovation this fall and they haven’t been able to use it. Instead, they have been playing on the elementary school’s grass field, which is quite different from what the Northmen are used to seeing.

“We’re playing on a terrible grass field this year,” Higginbotham said. “We love playing on turf.”

In the first half, the Northmen were aggressive and kept trying to get the ball to senior forward Sadie Crozier, but with Stevens’ aggressiveness, Crozier did not have many opportunities for an actual shot.

Speaking of Crozier, she became North Smithfield High’s all-time leading scorer during the Northmen’s 10-0 win over Woonsocket on Oct. 15 at Barry Field, as she scored her 57th career goal.

“She’s the leading scorer for boys and girls,” Higginbotham said. “It was a great record, and she was totally stoked about it.”

In the Northmen’s loss to East Providence, they tried to battle back from a two-goal deficit near the end of the second half, but could only manage to slice their deficit in half on a goal by sophomore Kate Zonin that was set up by senior Megan Masi.

N.S. had tied the score at 1-1 late in the opening half on a goal by Crozier that was assisted by senior Jacquelyn deRonde, who shares the captain’s duties with Crozier.

The Northmen have three more regular-season games to play on their schedule. On Thursday at 3:45 p.m., they will visit Moses Brown in Providence, and games against Middletown and Bay View are also on the docket.

Moses Brown entered Tuesday night’s action with a 10-2-3 record that was good for second place in the standings behind undefeated Chariho (14-0), and Middletown (10-4-1) was in a three-way tie for third place with E.P. and Prout.

“We’ve definitely had an easier beginning-of-the-season schedule,” Higginbotham added. “But I’m glad we’re playing tougher teams at the end. Going into the playoffs, it’s going to prepare us for what we’re going to see then.”

Sitting between third place and the Northmen and Mounties are Scituate (9-3-3) and Toll Gate (8-5-2).

The playoffs will begin next week, and in the meantime, “we’re just trying to stay healthy and keep everyone in good spirits,” Higginbotham said. “I think we’ll do well in the playoffs. We just have to keep plugging along, fix our little mistakes, and be prepared mentally and physically for the playoffs.”