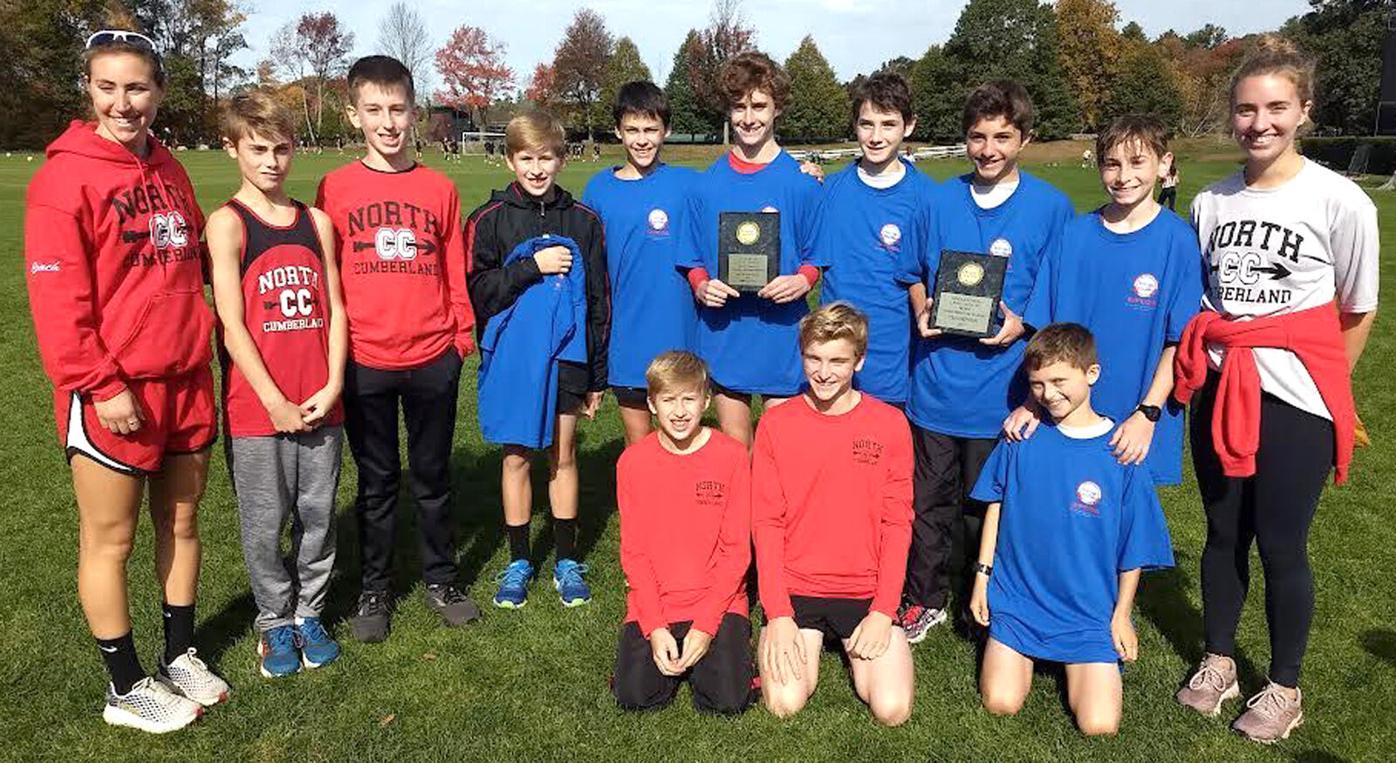 North Cumberland’s Charli McCue is all by herself as she races past the fans and gets ready to cross the finish line and capture the state championship in the girls’ race at last Saturday’s RIPCOA meet at Bryant University. McCue toured the 1.9-mile race in a time of 11:15.36 that outdistanced the runner-up finisher by 29.42 seconds.

North Cumberland’s Charli McCue is all by herself as she races past the fans and gets ready to cross the finish line and capture the state championship in the girls’ race at last Saturday’s RIPCOA meet at Bryant University. McCue toured the 1.9-mile race in a time of 11:15.36 that outdistanced the runner-up finisher by 29.42 seconds.

SMITHFIELD — Two years had past since the last state championship meet, and almost all the names from its title-winning 2019 team had changed.

But that didn’t slow down the North Cumberland Middle School boys’ cross country team in its quest to add another championship banner to its large collection at last Saturday morning’s RIPCOA Championships at Bryant University.

Jeff Schonhoff took fourth place out of 147 runners to lead a pack of six NCMS runners that placed in the top 30 and helped the team earn its sixth straight state title before a large gathering on the pristine 1.9-mile course.

“I’m very proud of our runners,” said first-year head coach Audrey O’Neill, who in 2011, ran for the NCMS girls’ team that won the state title. “They worked hard all season, and we did a lot of workouts on fields like this that really helped us. I just loved how they all worked together, so it was a really great day.”

While the boys’ team was able to hoist its championship plaque during the post-meet festivities, Charli McCue brought home a state title of her own in the girls’ race, as she dominated a field of 148 runners by taking first place in a time of 11:15.36 that outdistanced the runner-up finisher, Kickemuit’s Jessica Deal, by 29.42 seconds.

“She really ran well today,” O’Neill said of McCue, whose brother, Cole, won the boys’ state title in 2018. “She was undefeated this season. She’s amazing, and it’s fun to watch her run. She works so hard.”

Unfortunately for the girls’ team, it was unable to join the boys’ squad as six-time state champions, as NCMS settled for third place in an extremely competitive battle for the championship.

Cole captured the state title by scoring 81 points, and only two points behind the East Greenwich school was Barrington and NCMS with 83. However, Barrington was declared the runner-up finisher because its number six runner placed four spots better than NCMS’s sixth.

Nevertheless, both the boys’ and girls’ teams, which went undefeated during the Northern Division dual-meet season, brought out their finest performances, as did several runners from neighboring McCourt and Lincoln Middle Schools, which did not bring full teams to the meet.