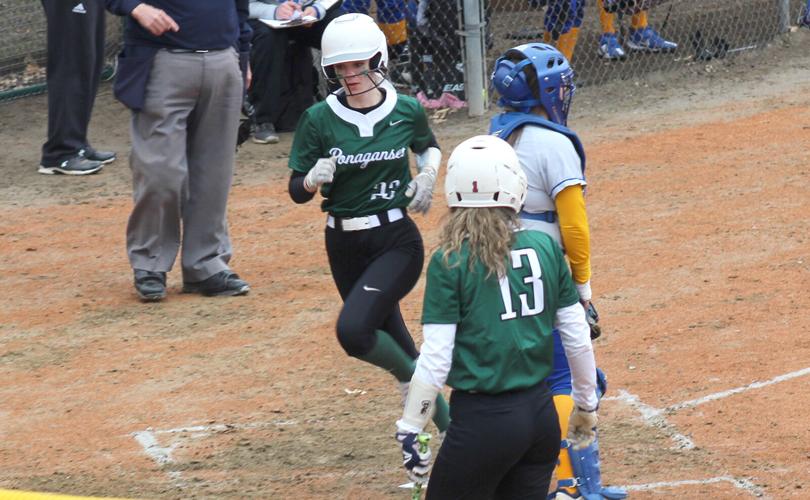 Ponaganset senior Mallory Gilmore, left, crosses the plate with her team’s second run of the game in front of the on-deck batter, senior Meg Viveiros, #13, during last Thursday’s Division II-North matchup against North Providence at Notte Park. The Chieftains are off to a 2-1 start this season that includes their 3-2 loss to the Cougars, but victories over Mount Saint Charles and Woonsocket. 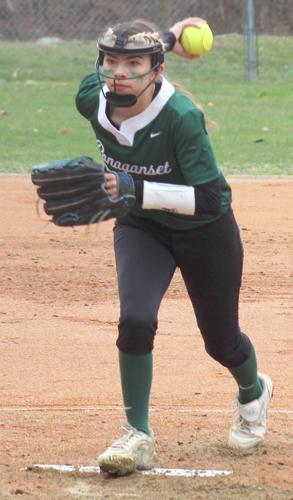 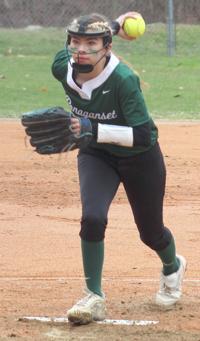 Ponaganset sophomore ace pitcher Chloe Barber, shown getting ready to fire a pitch to the plate during last week’s game against North Providence, has struck out 19 batters in 12 innings of work this spring. The Chieftains are back in action this afternoon with a Division II-North matchup at home against Toll Gate.

Ponaganset senior Mallory Gilmore, left, crosses the plate with her team’s second run of the game in front of the on-deck batter, senior Meg Viveiros, #13, during last Thursday’s Division II-North matchup against North Providence at Notte Park. The Chieftains are off to a 2-1 start this season that includes their 3-2 loss to the Cougars, but victories over Mount Saint Charles and Woonsocket.

Ponaganset sophomore ace pitcher Chloe Barber, shown getting ready to fire a pitch to the plate during last week’s game against North Providence, has struck out 19 batters in 12 innings of work this spring. The Chieftains are back in action this afternoon with a Division II-North matchup at home against Toll Gate.

GLOCESTER – It’s unusual to see high school softball teams with records barely over .500 want to move up a division, but when the RIIL’s offseason alignment decided to drop Division IV after only one season and move those eight teams to D-III, Ponaganset head coach Mike Calenda was thrilled to see his Chieftains get bumped from D-III to D-II.

Sure, the Chieftains, who posted a 7-6 mark last year, totaled just nine victories in their last two seasons in D-II (in 2017 and ‘18). But Calenda is very happy with the 20-player roster he has at his disposal this spring, which includes six returnees who earned All-Division honors during their careers and several freshmen and sophomores who promise to be very good players for years to come.

“We have a very good team,” Calenda said last Thursday afternoon after watching his team suffer a 3-2 loss to a team that dropped from D-I to D-II during the offseason, North Providence, at the Cougars’ Notte Park. “We can compete in Division II, we really can, and I’d be surprised if we didn’t make the playoffs.”

Senior second baseman Jenna Greene and outfielder Chloe Skene-Poirier are also back. Those two players were All-Division selections as freshmen, and along with Briggs, Hassell, Gilmore, first baseman Meghan Viveiros, catcher Shannon Healey, and outfielders Falyn Lusignan and Isabelle Besser, played on the Ponaganset team that won the D-III championship in 2019.

As for the younger players, the Chieftains appear to have an outstanding rookie in freshman right fielder Maia Salvo, who doubled and tripled in last Thursday’s game, and their starting battery, with returning sophomore pitcher Chloe Barber and freshman catcher Kyla Angell, is also a very talented one.

“We have a lot of seniors and some very good young players,” said Calenda, who also has freshman Ava DiFiore and Salvo on his pitching staff. “It’s a good mix for us.”

In the loss to the Cougars, the Chieftains were limited to six hits by NP senior ace pitcher Olivia Pedro, who struck out six batters and walked one. Barber, who along with Angell, lives in North Providence, also pitched well for Ponaganset, as she worked the first five innings, striking out six batters and allowing five hits, two earned runs, and a walk.

Down by a 3-2 score, after NP scored the tying and eventual game-winning runs in its half of the fourth, the visitors nearly tied the score in the top of the seventh by trying to put together a rally that had everyone at the park on the edges of their seats.

With one out, DiFiore came off the bench to single to center, and the next batter, junior pinch-hitter Becka Maggesen lined a shot up the middle. But NP second baseman Francesca Albanese dove to her right to glove that grounder and flip it to the shortstop, Riddhi Mistry, to erase the courtesy runner, Besser, on a close play for the second out.

And that out was huge, because the next batter, sophomore pinch-hitter Alayna Medina, grounded a double down the right-field line that sent Baggesen to third. Up to the plate stepped Salvo, who had hit the ball hard in all three of her plate appearances. Everyone thought that the Cougars were going to intentionally walk Salvo to load the bases, but Pedro pitched to her, and on her first offering — an inside fastball — Salvo popped out to Mistry on the edge of the outfield grass to end the game.

The Cougars took a 1-0 lead in the bottom of the first inning on a run-scoring infield groundout by Pedro. But the Chieftains produced their runs in the top of the third by collecting three of their hits – a one-out triple lined into the gap in left-center by Salvo, who came home on a grounder by Hassell; a ground single to right by Gilmore, and a sharp RBI double to left by Sayler.

“I wish we could have put the bat on the ball a little bit more,” said Calenda. “This was a tough loss, but we competed and we played well.”

The Chieftains kicked off their season in style last Tuesday at home by posting a 4-1 victory over Mount Saint Charles and one of the division’s best pitchers, Olivia Young. Ponaganset only managed to collect four hits off Young, who struck out 16 batters, but the hosts took advantage of a few errors in the field by the Mounties to plate their runs.

One of the Chieftains’ hits was a two-run, inside-the-park home run by Viveiros, and Sayler also socked a single and a double. Barber and DiFiore, meanwhile, teamed up to pitch a four-hitter, with Barber working the first three innings, striking out seven and allowing three walks and two hits, and DiFiore picking up the win by throwing the final four innings, striking out six and giving up two hits and a walk.

On Tuesday afternoon, the Chieftains returned to action with a game against Woonsocket at the Novans’ Cass Park and rolled to a 14-1 victory that saw Ponaganset, which held a 3-1 lead after three innings, break the game open late.

Leading the way at the plate were Hassell, who went 3-for 4 with two doubles and three runs scored, and Viveiros and Salvo, who each went 3-for-3 with a double – Salvo also scored twice. Barber was the winning pitcher and DiFiore worked the final inning, and they teamed up to strike out eight batters – six by Barber – and walk two.

The Chieftains are back in action today with a 4:30 game at home against Toll Gate.