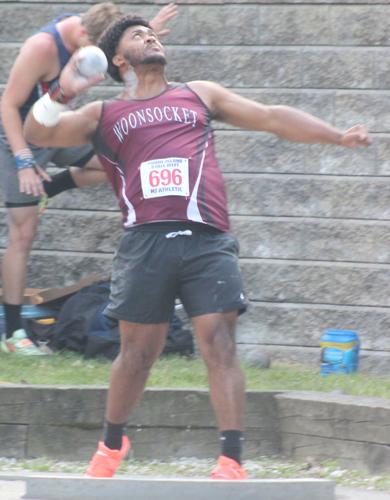 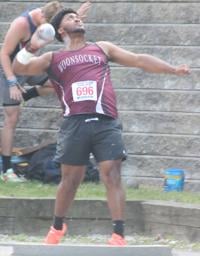 PROVIDENCE – There have been several instances of athletes capturing three individual events at the RIIL Outdoor Track & Field Championships, but you will be hard-pressed to find any athletes who dominated their three events in the manner that Woonsocket High senior Tarik Robinson-O’Hagan did last Saturday afternoon.

As expected, Robinson-O’Hagan struck gold in the hammer, shot put, and discus, and while he was impressive in each event, he created a buzz throughout Brown Stadium with his performance in the 12-pound hammer.

The University of Mississippi-bound All-American, who is the nation’s top-ranked thrower in that event, aired out a personal-best throw of 249 feet, five inches, which not only outdistanced the second-place thrower, Barrington senior Asher Robbins, by an astounding 30 feet, nine inches, but also broke his PR by 19 inches.

Robinson-O’Hagan fell short of the meet record, which is 253-3 and was set by former Bishop Hendricken All-American Jacob Freeman in 1999, but Freeman had set the mark that spring on Hendricken’s campus, not at Brown, meaning that Robinson-O’Hagan holds the facility record in that event.

Robinson-O’Hagan capped his remarkable day by winning the discus with a throw of 184-2 that was 25 feet, 10 inches better than Lincoln senior Ryan McPeak’s runner-up thrower. He didn’t break any records with that throw, and according to his head coach, Marc Piette, a tailwind in that event prevented him from putting up bigger numbers.

“He went 203 (feet) in practice (on Friday),” reported Piette, who said that Robinson-O’Hagan had four meets on his schedule left this month, including Tuesday’s New England Hammer Championships at Conley Stadium, where he planned to take part in the 12-pound and six-kilometer hammer and six-kilometer shot put.

Robinson-O’Hagan will also join several of last Saturday’s top athletes at the New England championship meet on Saturday at 10 a.m. at Willow Brook Park in New Britain, Conn., and one hurdler who hopes to make plenty of noise at that meet is North Smithfield senior Matt Stamatelatos.

Not only did Stamatelatos repeat as the state 300-meter hurdling champion in 39.34 seconds to top the runner-up finisher, La Salle Academy junior Brady Fisher by 1.1 seconds, but he and classmate Ray Marsella went 1-2 in the 110-meter hurdles, as Stamatelatos won the event in 15.49 seconds to nip Marsella by 0.08 of a second. Also finishing sixth was sophomore Aidan Bienvenue in 15.68 seconds.

At last year’s state meet, Marsella took second place and Stamatelatos was third in that event, and in the preliminaries, they went 2-3 again behind Barrington sophomore Ethan Knight, who started in the coveted fourth lane in the finals, thanks to his time of 15.46 that was 0.03 of a second better than Stamatelatos and 0.11 better than Marsella.

The 28 points that Stamatelatos and Marsella produced in the hurdling events accounted for more than three-fifths of N.S.’s scoring in the boys’ team standings. A year after placing third, and first among the public schools, the Northmen settled for fifth place out of 26 schools with 45, trailing La Salle Academy (79), Bishop Hendricken (66), St. Raphael Academy (57), and Barrington (52).

The Northmen also received a runner-up finish in the high jump from sophomore Nick Lamoureux, who tied his school record with a 6-foot-4 leap. Lamoureux and Classical senior Marquis Buchanan were the only athletes to hit 6-4, but Buchanan was declared the event’s winner because he needed one fewer attempt to clear the bar.

Senior Adam Dubois also took second place in the javelin with a throw of 190-11 that was nearly eight feet shy of the first-place throw delivered by La Salle senior Maxwell Cute.

In the girls’ meet, North Smithfield received stellar meets from junior Bethany Marsella, who finished third in the 100-meter hurdles in 16.06 seconds, and senior Jackie DeRonde, who tied for fourth place in the high jump with a 4-foot-10 leap.