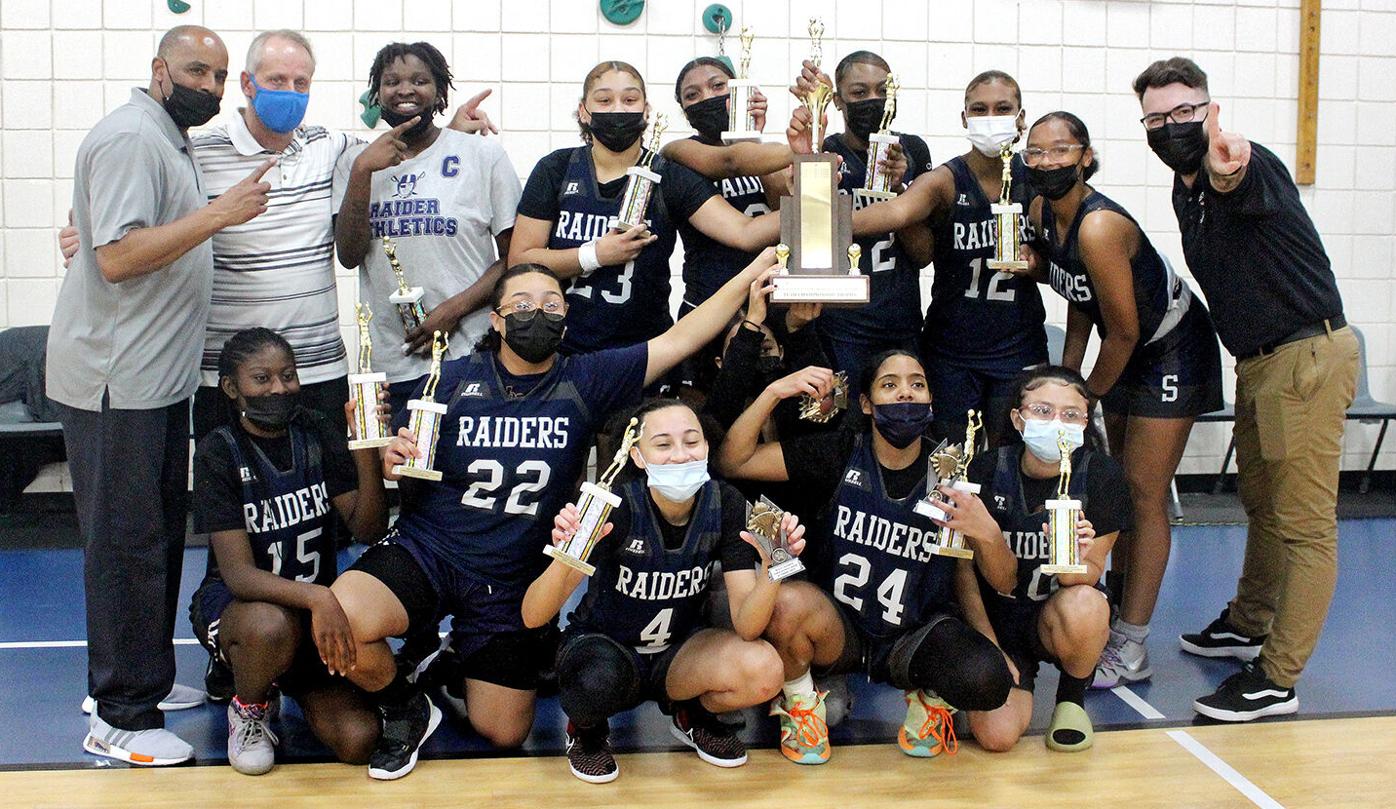 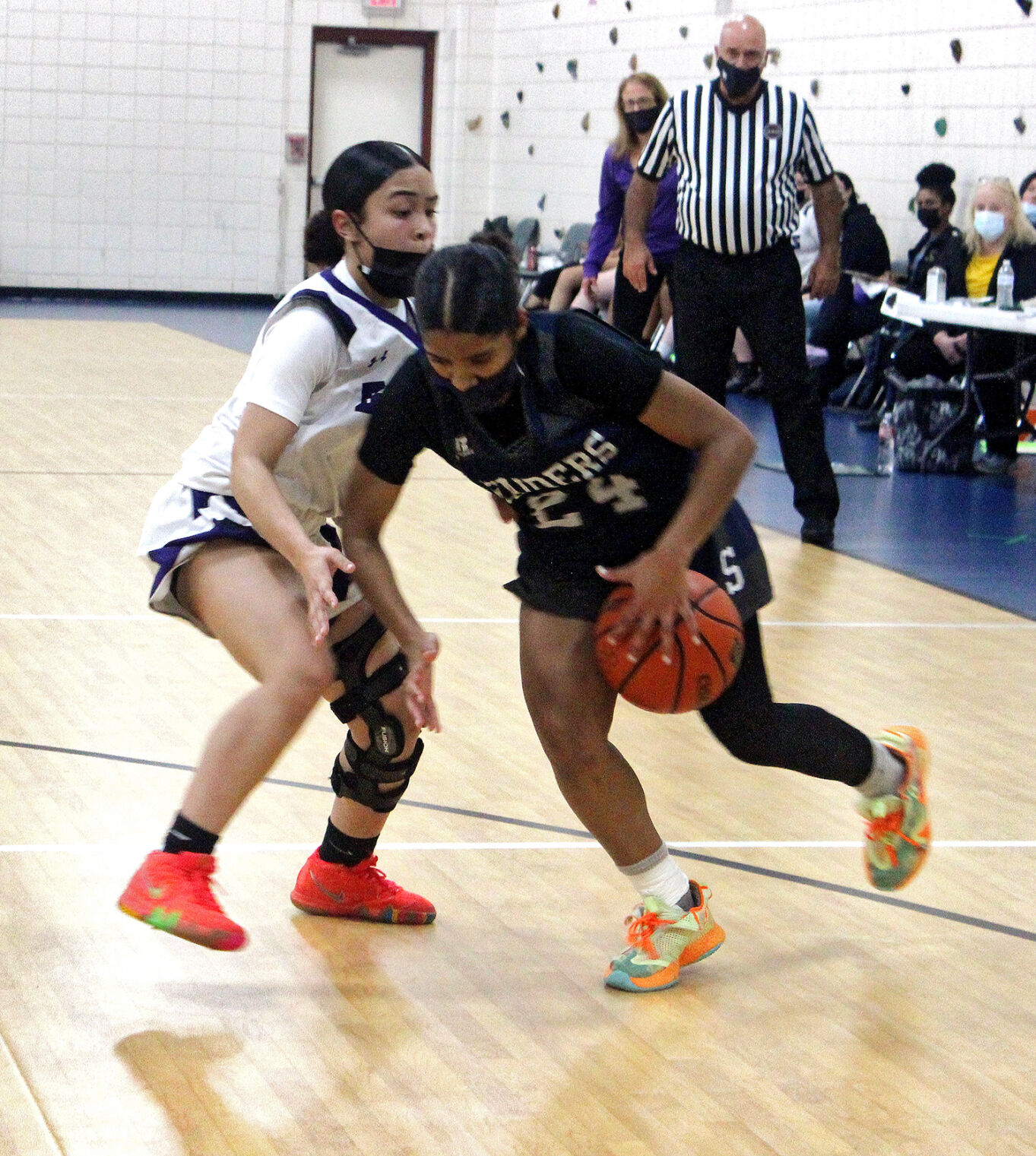 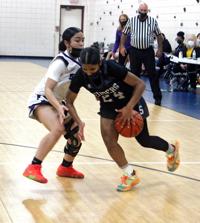 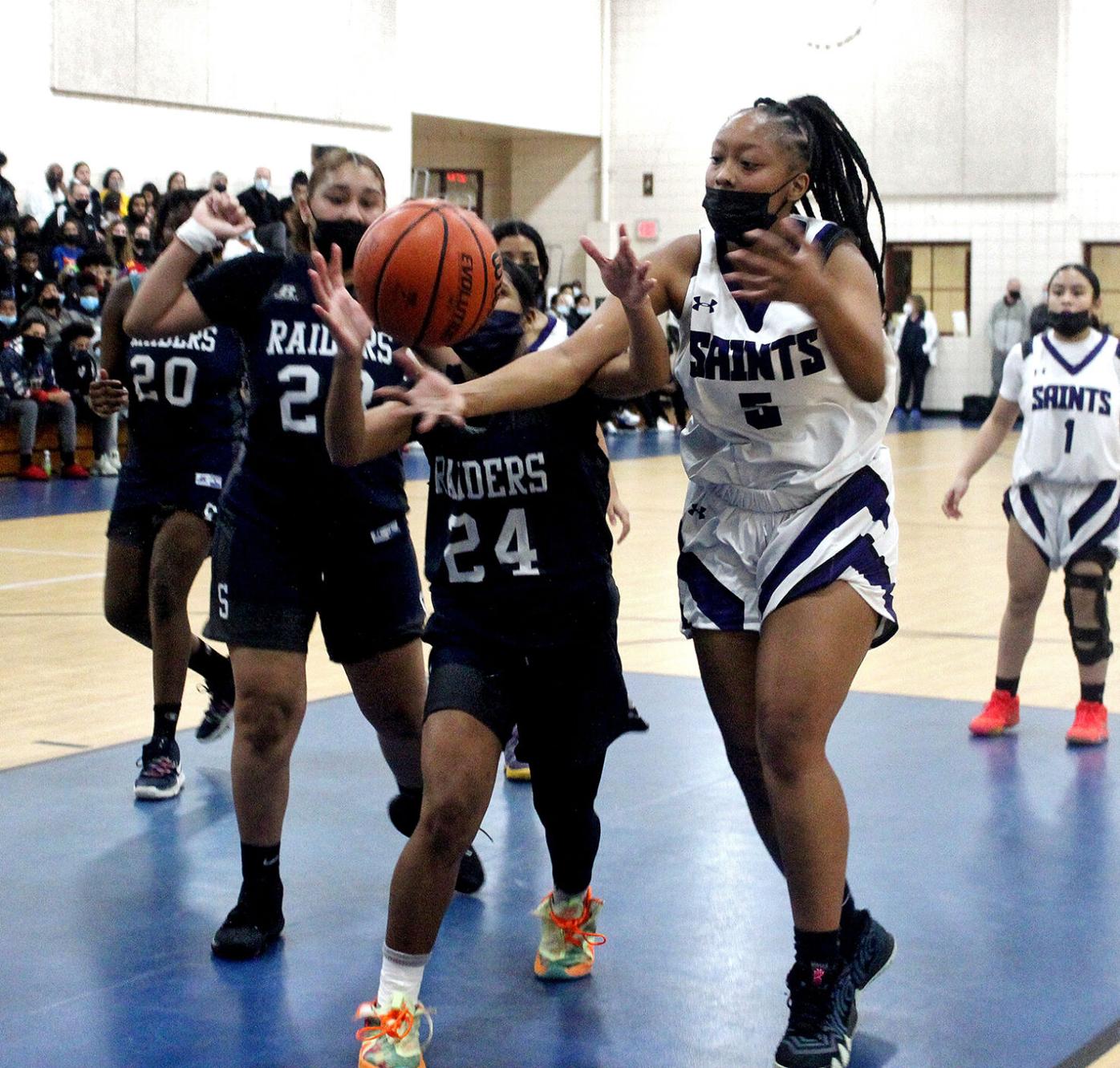 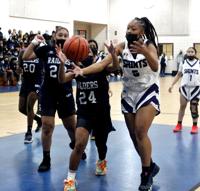 The new co-op team, which is playing in Division III this winter, is being co-coached by Tolman head coach Walter “Bunky” Gonzalez and Shea head coach John Lickert.

“I think with the style Bunky coaches and the way I coach – I’m learning off him and it’s great and he’s learning off me – we’re just giving it back to the kids,” Lickert said. “And the kids are just starting to come together. Shea and Tolman has always been rivals, so I think once we get the kids together, I think we’ll be tough to beat by the end of the year.”

The Shea/Tolman team defeated Division II Cumberland, 36-21, last Friday to make it to the following night’s finals against the D-I Saints, who have won this tournament the previous four years. The Saints have a new looking team and head coach Tammy Drape said that last Saturday’s game was a good way to see what they still needed to improve upon.

“It’s so early and it’s a good game to use as a test to figure out what we need to fix and work on,” she noted. “But you have to give hats off to (Shea/Tolman). It comes from their coaches and it helps when you get a point guard transfer.”

That transfer student is Tolman sophomore Armani Rivera, who starred for D-I Scituate High last winter and is beginning to make her name well known in Pawtucket.

“Having her being a leader on the basketball court with her skills and knowledge is tremendous for us,” Gonzalez said. “It’s a blessing for us to fall into our lap. Her energy, from beginning to end, carries throughout the entire team.”

Rivera was named the tournament’s MVP, as well as being part of the all-tournament team with teammate Aryana Blanco. Rivera led the way by scoring 18 points against the Saints, while Blanco, a freshman guard from Tolman, added 13 and did not play the fourth quarter after being injured at the end of the third.

The fourth quarter was key for the Raiders as they went into it with a 33-20 lead. The Saints cut that lead down to just five points, 40-35, with a three from junior Angelisse Melendez.

But despite being a young team, the Shea/Tolman squad banded together and kept hold of the lead for the eventual win.

“They showed a lot of heart, character, and pride,” Gonzalez said about his team. “They did a big transformation from yesterday to today. We preach valuing the basketball, and I think in the first half, when (SRA) had more turnovers than we did, we favored the basketball.

“And coach John said late in the game that when (SRA) cut it to five and we could have easily folded, they put their feet in the sand, they held their ground, and they finished,” added Gonzalez. “That’s the making of a good team.”

He added that it was satisfying to see the girls take what they have learned in practice and execute it on the court during a game and hold on for the victory.

Lickert also added, “We got punched in the face. We led the whole game by 12 or13 points and (SRA) came back, but we told the girls, ‘Hey, two minutes left, this is where you win the game.’ Like Bunky always says, the other teams are going to make runs, but we’re going to make our run, and we finished with a run and that was the game.”

Down the stretch, Rivera made the free throws she needed to keep the Saints at bay, who look very different from last year’s squad.

“It’s a brand new team,” Drape said. “But I don’t mind though, starting from the bottom. I have (seniors) Vicky (Adegboyega) and Ra’Nyah (Delves-Cooper), and Vicky has really impressed me. We just have to fine-tune a few things.”

Shea/Tolman also received 11 points from Tolman senior forward Klani Gaul. The Saints had two players in double figures in junior Tatiana Pereira with 16 and Melendez with 14.

Both teams saw each other’s potential, but will not see each other again this season. The Saints, which posted a 47-28 victory over Central Falls in their tournament opener, will go on to prepare for their D-I season, starting with games against La Salle Academy and North Kingstown.

“We talked as a team, and obviously when you’re (state) champions everyone is gunning for you,” Drape said. “We just want to make the playoffs and go from there, and everyday get better. I thought they played better today than they did yesterday.”

As for the Shea/Tolman team, it will play most of its home games at Jenks Junior High’s gym, but Gonzalez said they may try to sneak in a Shea or Tolman home game at some point during the season. Lickert said that as for uniforms, they will wear Tolman’s home whites and use the Shea grays for away games.

They are pretty much split down the middle between Shea and Tolman players, along with a couple from Blackstone Academy. They have three captains in Armani Rivera, Tolman junior forward Abryanna Encarnacion, and Shea sophomore Ka’Syra Fernandes.

“If they buy into it and stay focused with their schoolwork, and as long as everybody is healthy, look for us at the end of the season,” Gonzalez said.