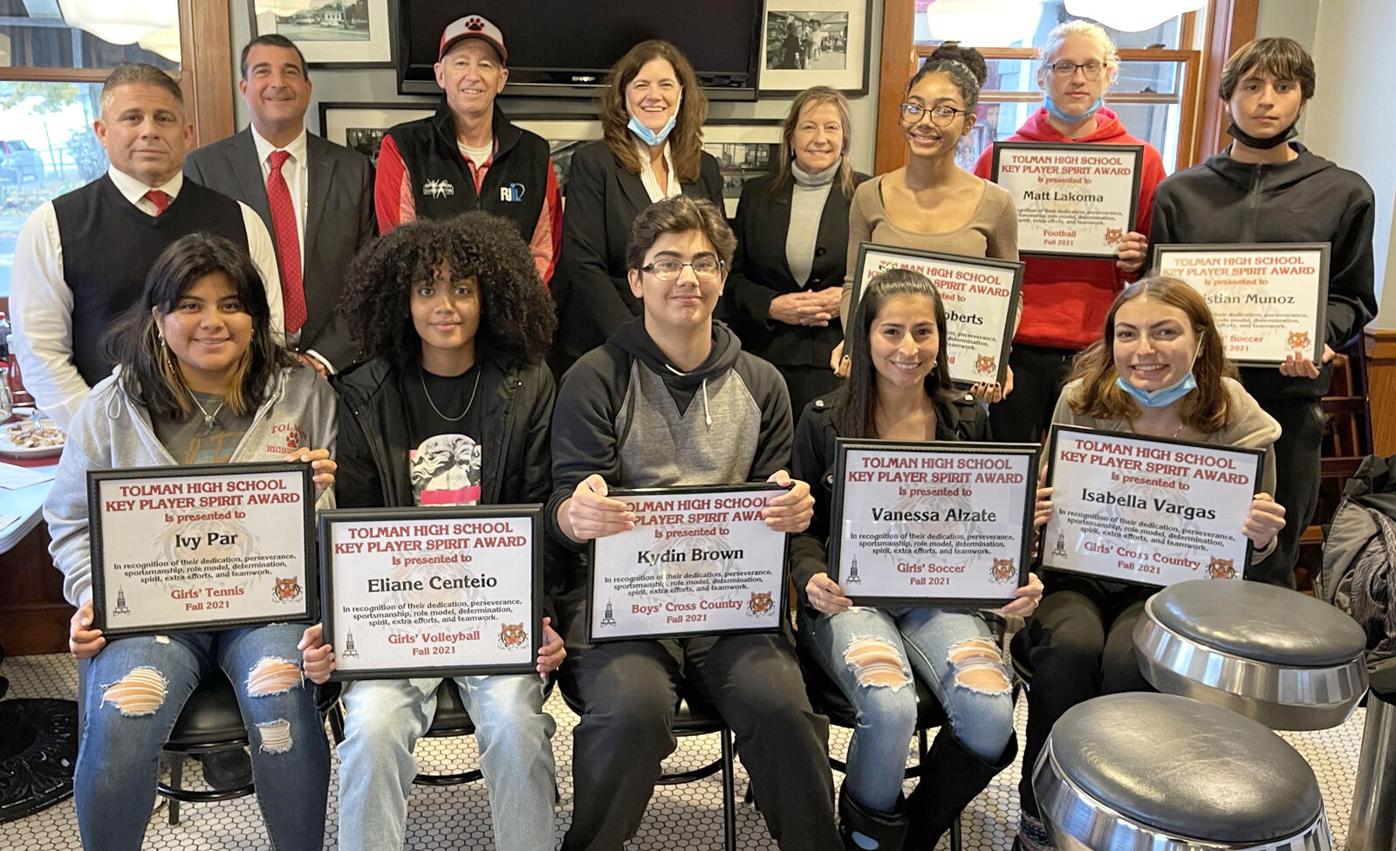 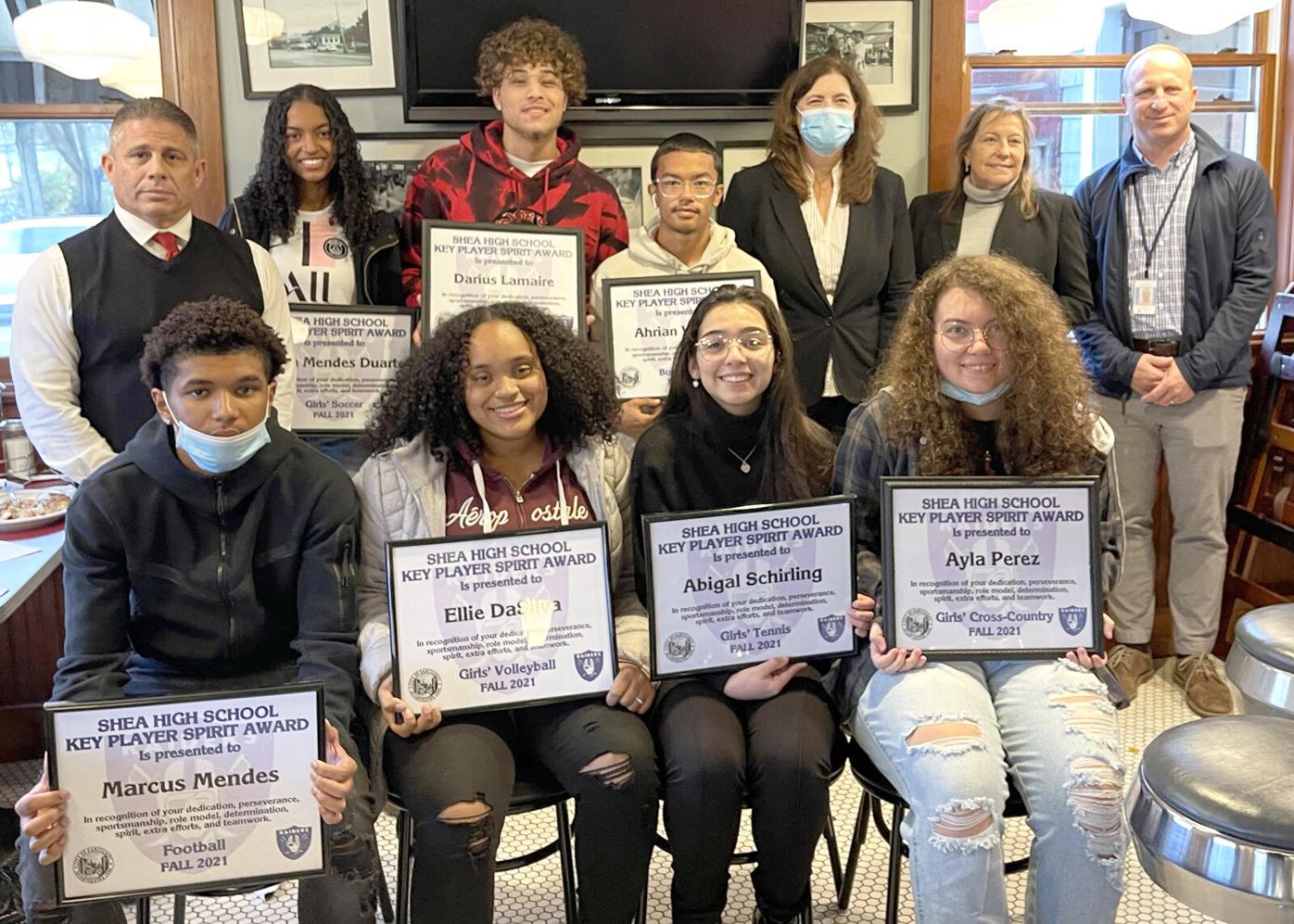 The Shea student-athletes who recently received the fall season’s Key Player Spirit Awards are, in front from left, Marcus Mendes, Ellie DaSilva, Abigal Schirling, and Ayla Perez; in back, Ciara Mendes Duarte, second from left; Darius Lamaire, third from left, and Ahrian Vasquez, center. Joining them for the presentation were, in back, athletic director Dino Campompiano, left; Pawtucket superintendent Cheryl McWilliams, third from right; guest speaker Christine L. McBurney, second from right; and Shea cross country coach Rich Kucal. The award is presented to a student-athlete from the schools’ varsity teams who exemplifies perseverance, effort, spirit, sportsmanship, teamwork, and determination, is a role model, and takes their academics seriously.

The Shea student-athletes who recently received the fall season’s Key Player Spirit Awards are, in front from left, Marcus Mendes, Ellie DaSilva, Abigal Schirling, and Ayla Perez; in back, Ciara Mendes Duarte, second from left; Darius Lamaire, third from left, and Ahrian Vasquez, center. Joining them for the presentation were, in back, athletic director Dino Campompiano, left; Pawtucket superintendent Cheryl McWilliams, third from right; guest speaker Christine L. McBurney, second from right; and Shea cross country coach Rich Kucal. The award is presented to a student-athlete from the schools’ varsity teams who exemplifies perseverance, effort, spirit, sportsmanship, teamwork, and determination, is a role model, and takes their academics seriously.

PAWTUCKET – Student-athletes from the city’s two public high schools, Tolman and Shea, were recently recognized and awarded the Key Player Spirit Awards for the fall season during a breakfast and ceremony at the Modern Diner.

The award is presented to a student-athlete from the schools’ varsity teams who exemplifies perseverance, effort, spirit, sportsmanship, teamwork, and determination, is a role model, and takes their academics seriously.

Here’s a look at this fall’s winners and why each head coach selected them for this honor.

“Vanessa is an amazing captain who constantly motivates her team to persevere. She is a role model for her teammates, gets honor grades, and also has a job. She is what all student athletes should aspire to be.” – Head coach Augustino LaScola

“Although a newcomer to the team, Kydon has showed nothing but a strong desire to improve at each practice and meet. He will continue to get better as a result of his strong determination.” – Head coach John Toth

“Isabelle worked very hard this season, as evidenced by her faster times from the year before. Not only was she performing better than last season, her times and results improved from race to race.” – Head coach Kayla Fleming

“Christian was a starter on the 2020 Tolman squad that made its third straight D-I title game. As a senior, Christian was the unquestioned leader and captain of the team. His work ethic throughout the offseason and on the practice field is the reason why he is the player he is today. Christian was a pleasure to coach, and he exceeded all of my expectations as a Tolman soccer player and leader. – Head coach Daniel Silva

“Ivy was a leader this year and helped by working with the players in doubles. She rose to the occasion when she found out she would be playing singles and worked hard at a 12-3 record. She led the way in setting up the team’s Senior Day, doing most of the work herself.” – Head coach John Jasionowski

“Matt’s academics are strong. Matt’s just a great student. On the football field, there is nothing that I can’t ask him to do and he will do it 100 percent.” – Head coach Jason DeLawrence

“Eli has developed an amazing ability of time management. Between taking advanced classes, having straight A’s, and attending all varsity and JV practices, she continues to be awesome in all areas. In the short period of time she had to learn the game of volleyball, Eli showed determination, as well as leading by example and becoming a role model for the younger student-athletes.” – Head coach Steve Bevilacqua

“Lauren is at every practice and game prepared and ready to go. She practices at home and it shows in her performance. She is a leader of our team and helps the newer team members. Lauren always volunteers to help whenever there is work to be done. She is a great role model and we are happy and proud to have her on our team.” – Head coach Kelly Ogden

“Abigal is the definition of a great teammate. She is an excellent role model for all of the girls on the team, due to her dedication on the court and in the classroom. Her willingness to work hard and her perpetual positive attitude have made her the wonderful student-athlete that she is. Abigal has been an absolute pleasure to coach the last four years.” – Head coach Jonathan Leddy

“Darius has displayed a great deal of leadership to this year’s team. He is extremely dependable and brings a lot of positive energy to each practice and competition. In addition, Darius is a model student who represents our team in a good way in school each and every day.” – Head coach Rich Kucal

“Ayla made it to almost every practice since August and hasn’t missed a meet. She works hard at every practice and meet to make herself a better runner. She is a great leader and a wonderful example of determination for her teammates.” – Head coach Greg Clark

“Ellie is very dedicated, hard working, and a positive role model. She always has a smile on her face and is such a joy to be around. Ellie comes to every practice and match and always gives 100 percent no matter what the situation is.” – Head coach Jorge DosSantos

“Ahrian is an extraordinary young man. I have seen many examples of his talent and have been long impressed with his work ethic. After four years of playing varsity, the last two as a captain, he’s earned my respect, but more importantly, he’s earned the respect of his teammates.” – Head coach Pierre Ridore

“What a pleasure it has been to coach Marcus the last four years. He’s what we look for in all of our student-athletes at Shea High School. Marcus comes to work prepared, he’s never in trouble, and he always maintains passing grades. On the field, he’s always working to make himself a better player. He works just as hard in practice as he does in a game. Marcus is a true role model on and off the field, and I’m so proud of the wonderful young man he has become.” – Head coach Dino Campopiano