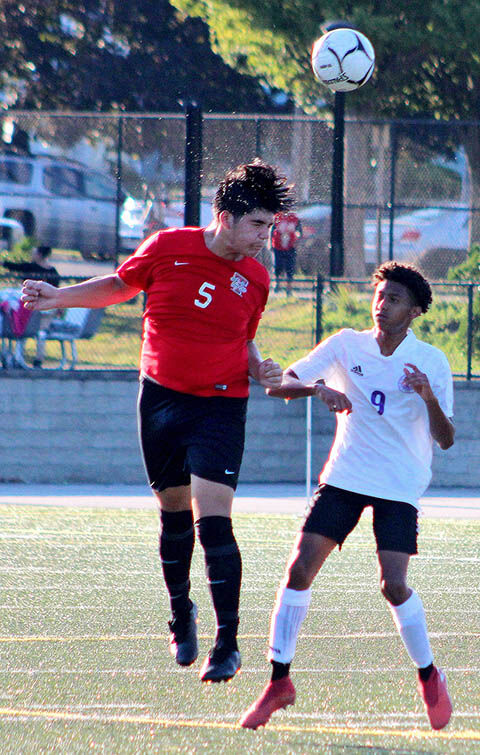 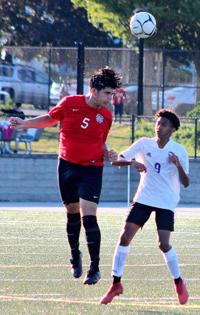 Tolman freshman Alonso Morales, left, heads the ball away from Classical sophomore Christian Noriega during last Saturday’s Division I game at Max Read Field. The Tigers, who evened their record at 2-2 by posting a 4-0 victory, will host East Greenwich tonight at 7 p.m. at the McKinnon-Alves Soccer Complex. (Breeze photos by Kayla Panu) 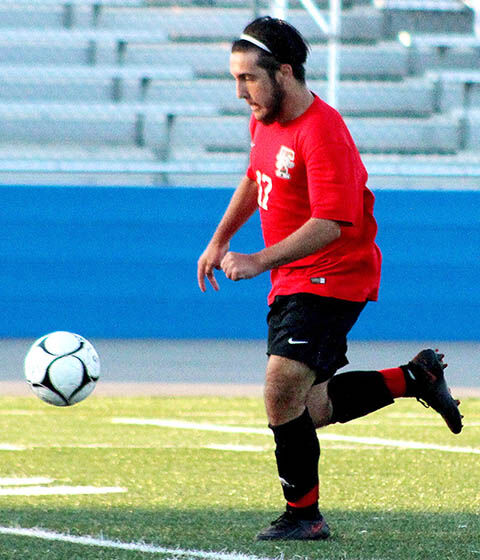 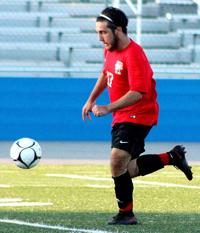 Tolman senior Tiago Silva, shown racing down the field on a breakaway during last Saturday’s D-I matchup against Classical, netted a hat trick in the first half to lead the Tigers to a 4-0 victory.

Tolman freshman Alonso Morales, left, heads the ball away from Classical sophomore Christian Noriega during last Saturday’s Division I game at Max Read Field. The Tigers, who evened their record at 2-2 by posting a 4-0 victory, will host East Greenwich tonight at 7 p.m. at the McKinnon-Alves Soccer Complex. (Breeze photos by Kayla Panu)

Tolman senior Tiago Silva, shown racing down the field on a breakaway during last Saturday’s D-I matchup against Classical, netted a hat trick in the first half to lead the Tigers to a 4-0 victory.

PAWTUCKET – Thanks to three quick goals in the opening half, the Tolman High boys’ soccer team shut out Classical, 4-0, last Saturday night at Max Read Field to even its Division I record at 2-2.

Senior Tiago Silva picked up a hat trick by scoring all three of the Tigers’ first-half goals. Silva needed only two minutes to score the only goal the hosts would need, and a minute later, he doubled the Tigers’ lead by scoring off a pass from sophomore Anderson Cardoso. Silva’s third goal came at the 21-minute mark.

While head coach Dan Silva was happy to see his senior midfielder enjoy a career night, he wasn’t pleased with his team’s play in the opening half.

“Very sloppy, young kids, inexperienced,” he added, “and then you score a couple of goals and you feel good about yourself. It’s a work in progress and a 2-2 start to the season, but we have a lot of young kids and a long way to go.”

After making a crazy run in the playoffs that saw them reach their third straight state championship game – Tolman suffered a 3-1 loss in that game to South Kingstown – the Tigers graduated key, experienced players. This year, they return a lot of players – 14 of them – but not a lot of starters, so the Tigers’ veteran head coach is trying to get them to gel in this early part of the season.

“We have some very talented sophomores and freshmen, and we have seniors and juniors who have been around,” he said. “It’s just a matter of teaching these kids what it takes to win at this level every single day. The last two practices were the first times we had varsity practices with intensity, attitude, and competition. All that stuff has to come.”

Two young players who did well in last weekend’s victory over Classical were Cardoso, who finished the contest with a goal in the 64th minute and an assist, and junior keeper Alex Reyes, who picked up the shutout.

Silva said that Reyes has never played varsity before, and the starting goalie in the first game of the season, junior Jose Gudiel, popped his shoulder out. Gudiel is working his way back, added Silva, but it will continue to be a competition at that position.

Silva has three senior captains in Christian Munoz, Elmer Recinos, and Leoscar Morales. Munoz started last year, and according to Silva, was a piece of the puzzle in the championship run.

The Tigers kicked off the season on Sept. 7 with a 2-1 win over Central at the McKinnon-Alves Soccer Complex, as Cardoso scored a goal in each half off passes from freshmen Deionni Cumplido and Alonso Morales. But three nights later at Macomber Stadium, they fell to Central Falls, 4-0, and on Sept. 14 at Tucker Field, they lost to Cumberland, 2-0.

The veteran head coach said that it feels good to have a full season this fall and be able to play a lot of teams they did not get to see last season. The ultimate goal is to get back to the playoffs, while competing and improving throughout the year.

“We have high expectations,” Silva said. “We’ve done a lot here obviously, and we’re not about to concede that. One game at a time and it’s not going to be easy, but the goal is to try to get in with our points and see what happens.”

The Tigers are scheduled to host East Greenwich tonight at McKinnon-Alves Complex at 7 p.m. They will then travel to East Providence on Saturday at 1 p.m. for a matchup with the Townies.