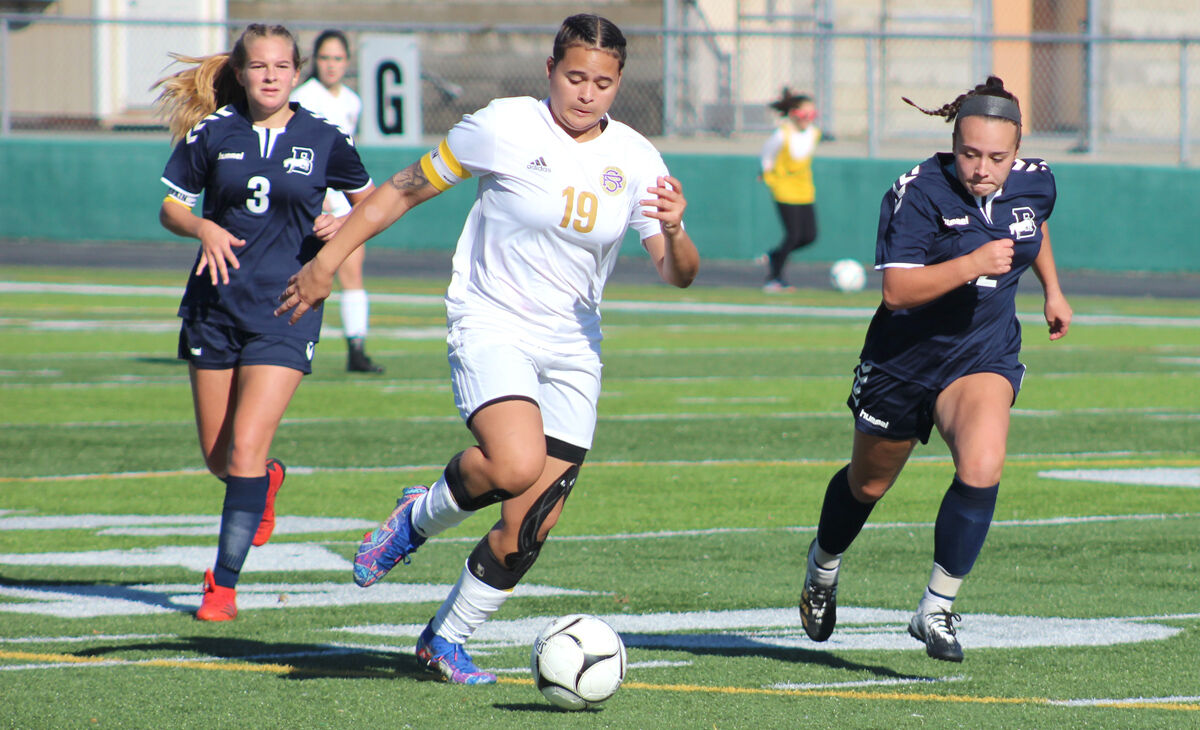 St. Raphael Academy senior captain Ariel O’Brien, #19, races down the field with the ball as she is pursued by Burrillville junior Allie Trimble, left, and sophomore Emma Withington, right, during the second half of last Saturday’s Division III title game at Cranston Stadium. The undefeated Broncos nipped the Saints, 1-0. 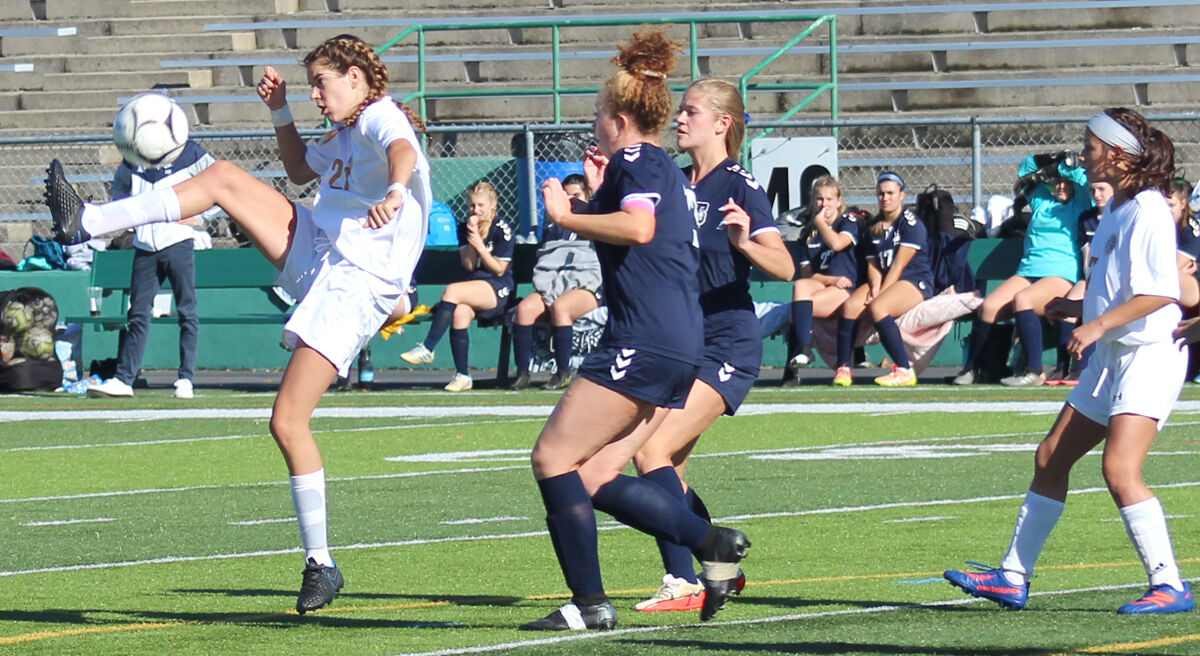 St. Raphael Academy senior captain Ariel O’Brien, #19, races down the field with the ball as she is pursued by Burrillville junior Allie Trimble, left, and sophomore Emma Withington, right, during the second half of last Saturday’s Division III title game at Cranston Stadium. The undefeated Broncos nipped the Saints, 1-0.

PAWTUCKET – One of the greatest regular seasons in the 24-year history of the St. Raphael Academy girls’ soccer team did not end in championship glory.

Facing the team that dealt them their lone regular-season defeat, the Saints played an outstanding game from start to finish, but fell prey to an unusual goal midway through the second half that lifted Burrillville High to a 1-0 victory in last Saturday morning’s Division III title game at Cranston Stadium.

In a defensive battle that matched up the East regular-season champion Saints (15-2-2) and West champion Broncos (19-0) and saw them combine for only 10 shots, it was Burrillville sophomore Maddie Keegan who provided the heroics by scoring the goal with 15:48 to go in the game.

Keegan lofted a 30-yard free kick near the center of the field that hit the bottom of the crossbar and fell behind SRA freshman goalkeeper Paige Troiano and just over the goal line before bouncing back onto the field.

Once the ball bounced in front of Troiano, both teams scampered after it, and junior Sam Murphy managed to race in and head the ball into the back of the net after getting a piece of a header from her classmate, Adelina Young. But no one noticed the referee near the side of the net signal that, yes, Keegan’s free kick bounced behind the goal line.

The Saints, who only took three shots in the game, had suffered a 3-1 defeat to the Broncos on Sept. 29 at the McKinnon-Alves Complex, but turned in a better performance in last Saturday’s rematch that was praised by their second-year head coach, Ivannah Perez.

“We came here and did our best,” she said after posing for a picture with her team near one of the nets. “I thought we did amazing and played a great game. (Burrillville) is a good team and they also played well, so I can’t complain.”

Making their first appearance in the finals since their 2008 championship season, the Saints had punched their tickets to the title game four days earlier by netting a 1-0 victory over Westerly High. Junior Andrea Maria Serra Cervera scored the goal midway through the second half by tapping in the rebound of a shot.

In the Saints’ quarterfinal-round opener against Exeter/West Greenwich on Nov. 4, they cruised to a 4-1 triumph that saw senior captain Ariel O’Brien and Serra Cervera each score a pair of goals and Perez recognize that “we were very cohesive and playing as a team. It was one of our best games of the year.”

The Saints’ two playoff victories were part of a four-game win streak that began after they battled Providence Country Day to a scoreless tie on Oct. 21. SRA had rolled past PCD earlier in the season, 6-0, “and they knew that I was really upset about that game,” added Perez. “But they came into practice the next day ready to go, and since then, they’ve been putting in the work and playing really well.”