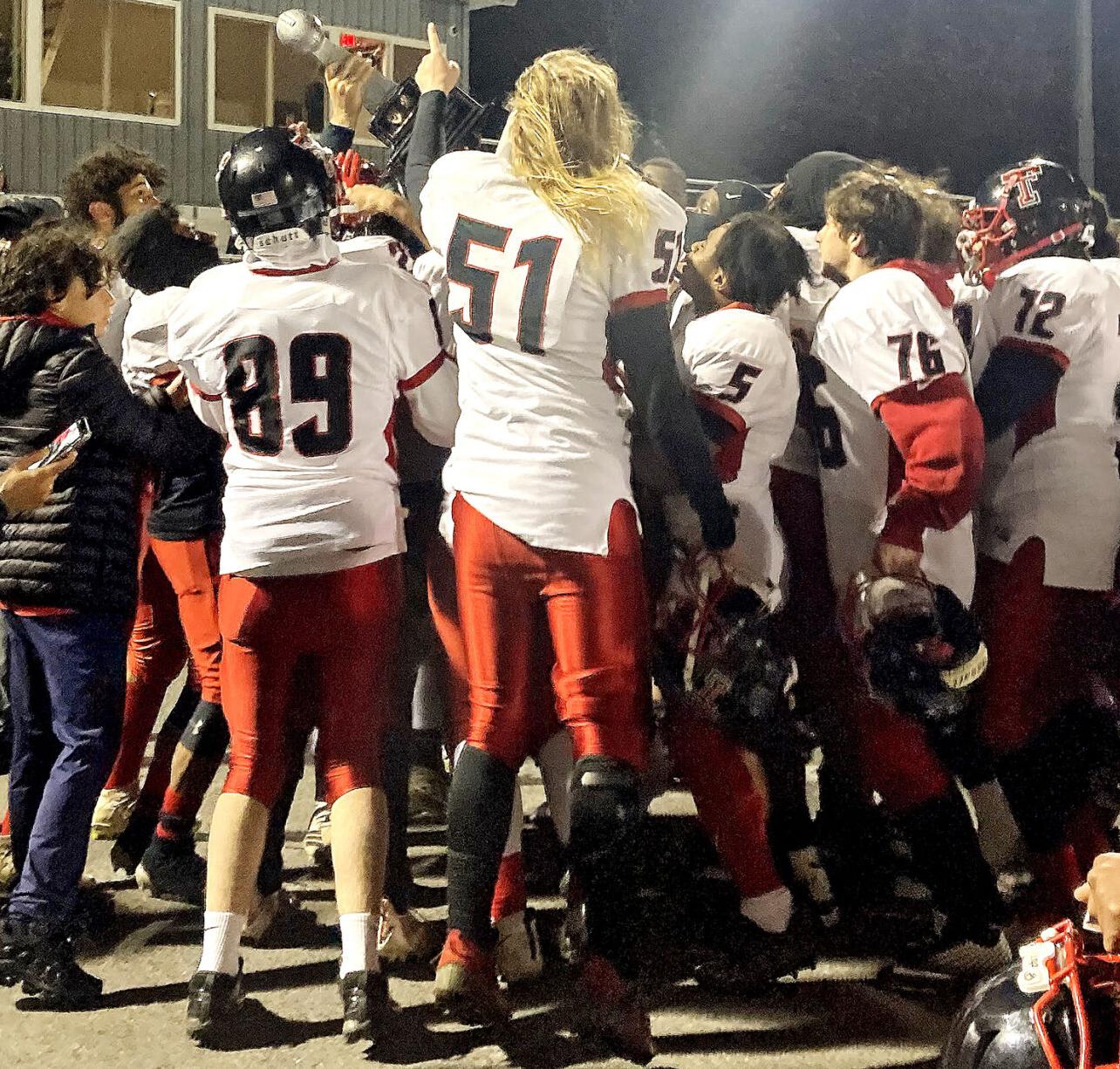 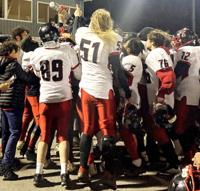 Left, the players on the Tolman High football team joyously gather around their city championship trophy after defeating Shea, 20-7, in last week’s Thanksgiving Eve game at Max Read Field. Shea, which had owned a three-game win streak over the Tigers, leads the holiday series, 10-9. Right, Shea junior running back Zion Duarte, above, can’t escape the grasp of Tolman senior defensive back Lershaun Hibbert. 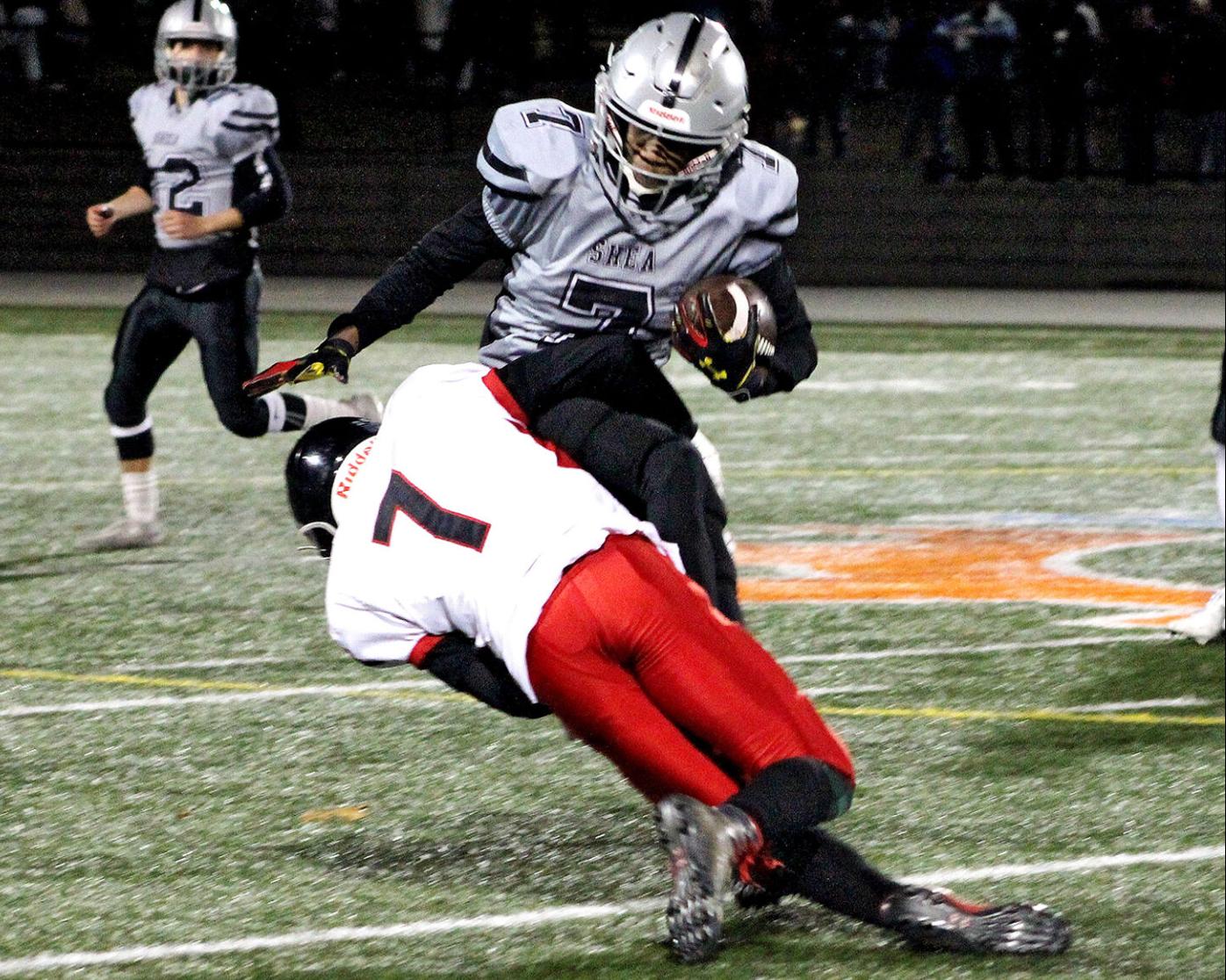 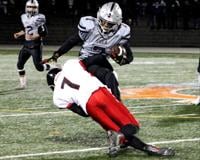 Left, the players on the Tolman High football team joyously gather around their city championship trophy after defeating Shea, 20-7, in last week’s Thanksgiving Eve game at Max Read Field. Shea, which had owned a three-game win streak over the Tigers, leads the holiday series, 10-9. Right, Shea junior running back Zion Duarte, above, can’t escape the grasp of Tolman senior defensive back Lershaun Hibbert.

While the victory ended a three-game holiday losing streak for the Tigers, who wrap up their season with a 5-5 record, but victories in four of their last five games, the loss caps a 3-5 season for the Raiders, who lead the Thanksgiving series, 10-9, and Campopiano.

It’s been said that when one door closes, another opens, but in this case, the opposite can be said for Campopiano, who three months earlier accepted the role as the head athletic director of the Pawtucket school system, but relinquished the reins of his program, which he had led for the past 26 years.

“This is it, my last game,” he said after both teams went through the line to shake hands. And it was a bittersweet end for Campopiano, as his team lost, but at the same time, his sideline was full of Shea alumni, who had once played for him and came out on a cold night to see and support him.

As for the Tigers, who last defeated the Raiders in 2016, “we beat them when (Shea) had Yanique Duarte and all those nice guys go to the (Division II) Super Bowl and Dino played his JV team,” said Tolman head coach Jason DeLawrence. “We barely won that game, but tonight, we finally won and it’s a great feeling.”

Despite losing to Classical in the D-II semifinals, the Tigers had found something in senior Aaron Carrion at quarterback and they rode that into their final game. And while DeLawrence was happy for his players, he was also sad to see the Raiders’ longtime mentor step away from coaching.

“Shea’s a great team, and I’m a little sad that I may never coach against Dino again,” DeLawrence said. “He’s one of my mentors in this Rhode Island coaching fraternity. He’s one of the coaches I would call and ask questions. He helped me work with these guys, and I’ve seen the greatness he did over there.”

The Raiders nearly scored the game’s first points when they received the opening kickoff, and on six plays, drove the ball from their 41-yard line to the Tigers’ one-yard line. But on their seventh play, quarterback Cam Seaver fumbled the ball, and Tolman’s Michael Wilson recovered it.

After two carries by Jadin Nunez brought the ball to the Tigers’ 15, Carrion connected with Lershaun Hibbert for an 85-yard touchdown pass. They then failed to convert on their two-point conversion attempt, but 5:14 into the game, the Tigers found themselves with a 6-0 advantage.

“At the end of the day, they were the better team tonight and they wanted it more than us,” Campopiano said about Tolman. “They played very well and we didn’t. All the credit goes to them. (DeLawrence) got them prepared, and at the end of the day, they played awesome. Offensively, they dominated up front, and defensively, bottom line, they wanted it more. I’m very happy for them.”

The Tigers added another touchdown to start the third quarter as they received the opening kickoff, drove 63 yards on 16 plays, and saw Osei race into the end zone from the Raiders’ one-yard line.

The Tigers’ defense, meanwhile, continued to be a pain for the Raiders and added two more points on a safety. With 2:07 to play in the game, the Raiders got the ball at their six-yard line, and after a false start and an incomplete pass, Seaver was eventually taken down in the end zone for the safety.

“I’m just happy,” DeLawrence said as his team celebrated with the city trophy. “The kids did everything I asked them to do this week. And I’m just so happy for the senior class. I’ve got 14 seniors, and they fought all year. We were done, but we fought back and we made the playoffs. We lost to Classical, but we came back and got this trophy.”

Both teams selected a Most Valuable Player for the game. For the Raiders, the MVP was Alves, and for the Tigers, it was Osei.