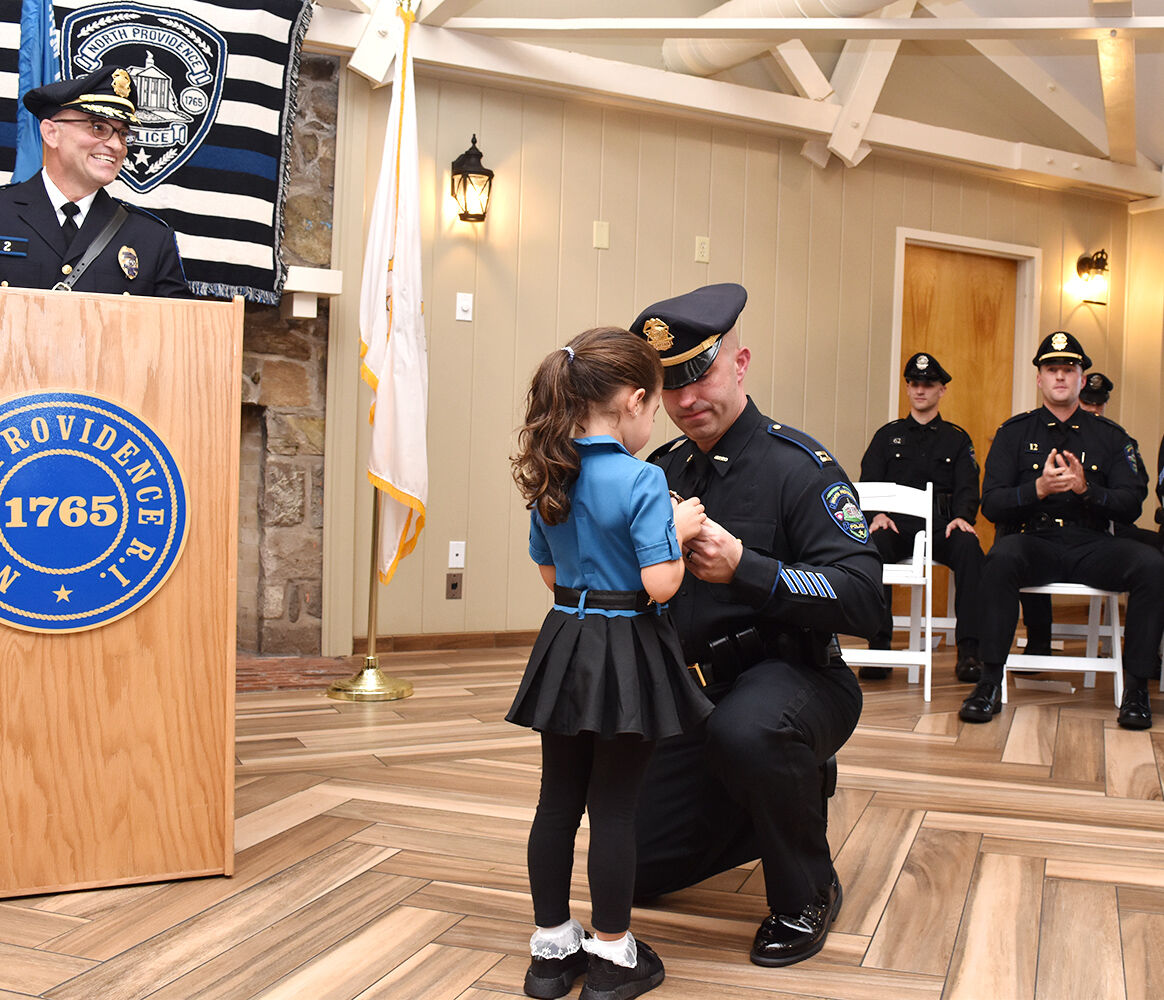 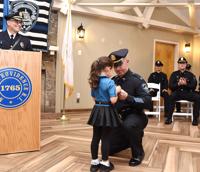 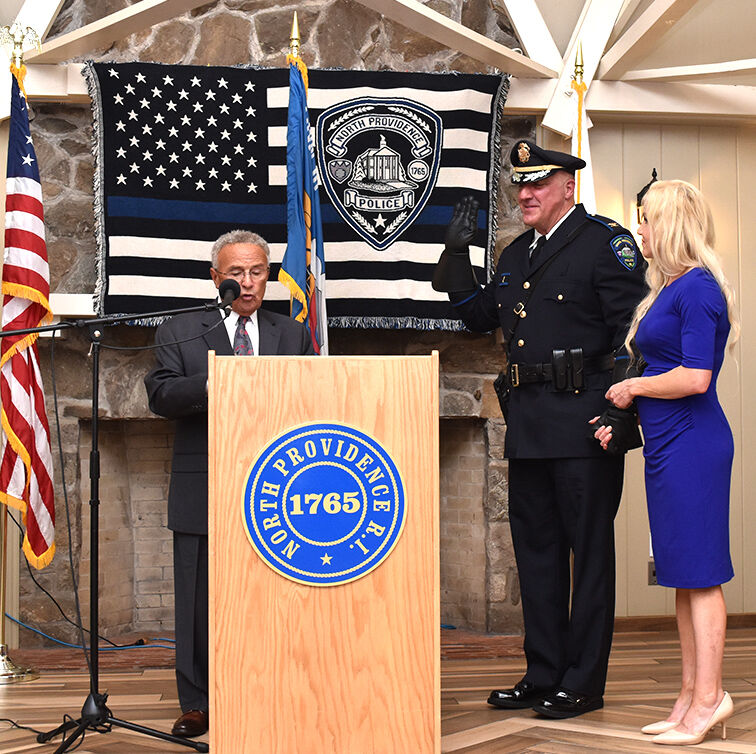 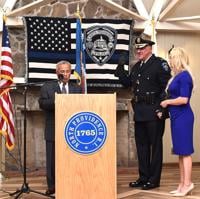 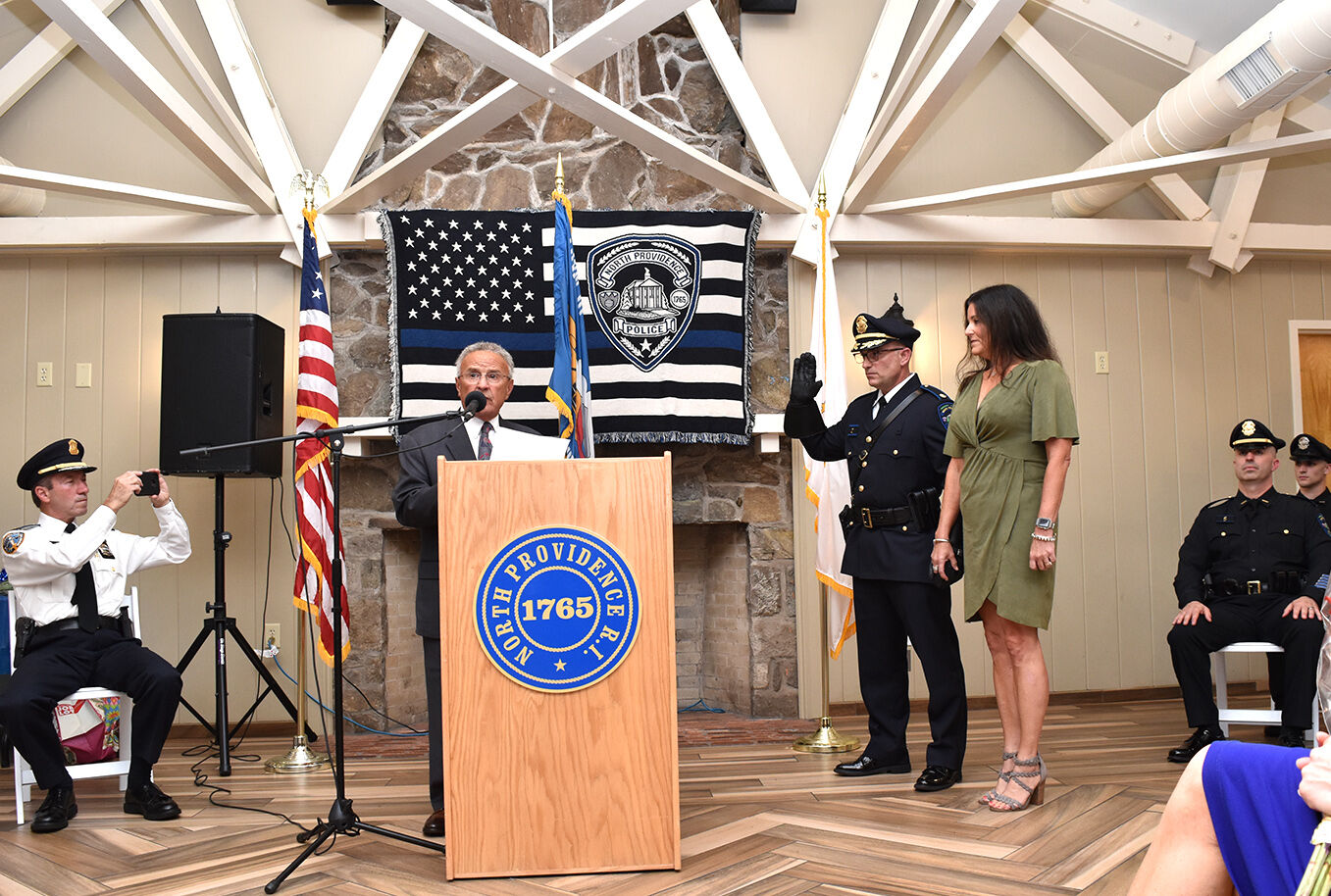 NORTH PROVIDENCE – Saying he’s excited and proud of what the North Providence Police Department will achieve through teamwork and trusting each other, new Chief of Police Alfredo Ruggiero Jr. was sworn in last Wednesday as friends and family watched at the Meehan Overlook.

Ruggiero, who had his badge pinned by his wife, Alexandra, told the crowd he will lead the department to be compassionate, caring, and professional, enhancing trust with the community as well, because the community is the backbone of any police department.

He said he looks forward to leading the North Providence Police Department with the highest level of service, and he continues to be proud to say that he’s part of this agency and what it stands for. He said he’s humbled and honored daily as he walks through the doors of the department and sees the names on the walls, and knows he has big shoes to fill. One of those names Ruggiero gave credit to was Tony Tudino, the oldest living member of the department who was in attendance at last week’s ceremony.

Ruggiero credited his parents for instilling a strong work ethic in him and his wife for being his support system.

Ruggiero promised to show respect to the community and to run a department that treats people fairly and with professionalism every day. He said he’s proud to work alongside the men and women of the department, and promised that this group will continue to give the highest level of service.

Mayor Charles Lombardi announced in April, after former Chief Arthur Martins retired, that Ruggiero, the town’s deputy chief at the time, would replace him, but he held off on holding a more formal ceremony until the fall when more vaccines would be administered.

Speaking before a crowded room at Camp Meehan, with many state and local law enforcement professionals in attendance, Lombardi said Ruggiero has a “scary” list of accomplishments and “outstanding background” as a Marine and award-winning former member of the Rhode Island State Police, and he is absolutely the best person to lead a department that has made such strides. He said he knew he would hire Ruggiero the moment he laid eyes on his imposing figure.

“I mean, look at this guy, then look at me,” he joked. “You do understand that I need big guys around me.”

Being a state trooper and a Marine may have been tough, said Lombardi, laughing, but now Ruggiero has to work for him.

Ruggiero emphasized how proud he is to serve his hometown in the highest law enforcement seat, recounting his early days here going to school and playing sports.

Lombardi took the opportunity to address the idea of defunding police departments, saying that as long as he’s mayor of North Providence, that will “never, never happen here.” He said he’ll continue to support upholding the law, and when residents call the department, the “only person responding will be a police officer, not a social worker.” He got more loud cheers when he said it’s amazing what can be accomplished when one allows police departments to be police departments and shows them support.

Lombardi said he left it up to Ruggiero to pick his second in command, and Ruggiero didn’t hesitate to pick Lepre as his deputy chief.

Lepre, who had his badge pinned by his wife, Cheryl, said he looks forward to working with town leaders and residents to help Ruggiero make North Providence the safest community in Rhode Island.

Providence Police Chief Hugh Clements Jr. emceed last Wednesday’s event, telling North Providence residents that they got a good one in Lepre, who previously flourished in numerous roles within his department. Lepre has won “all sorts of awards,” he said, and did his best work as a patrolman on the streets suppressing crime. He said he will do “astounding things in this town,” hailing Lombardi as a “forward-thinking mayor” who chose someone with the skills to instill 21st-century good policing practices. No one does better than Lombardi as mayor, Clements said, and no one does it with the same gravitas and charisma.

Clements said it was bittersweet to see Lepre leave Providence and join North Providence. He said Lepre always worked hard and has an impeccable reputation.

Gov. Dan McKee congratulated both Ruggiero and Lepre, saying the appointment of police leaders is an important day in any community. He emphasized the respect that police deserve for the “unbelievable work” that they do, noting his own great relationship as former Cumberland mayor with his own police chiefs, Tony Silva and John Desmarais.

Several officers were promoted within the department at last week’s ceremony, including:

• And Pietro Bellone, to sergeant. Bettina Bellone pinned his badge.

Three new officers were also sworn in, including:

• Ryan McCluskie, with his badge pinned by Richard McCluskie.

• Thomas Evans, with his badge pinned by Leila Evans.

• And Andrew Skorski, with his badge pinned by Brenda Skorski.

The North Providence Police Department Honor and Color Guards presented the colors for the Sept. 22 ceremony, while the Pledge of Allegiance was led by Officer Thomas Evans, and the national anthem was performed by Olivia Picard. The Rev. T.J. Varghese, of Mary Mother of Mankind Church, gave the invocation and benediction, and the FOP Lodge #13 hosted the reception.