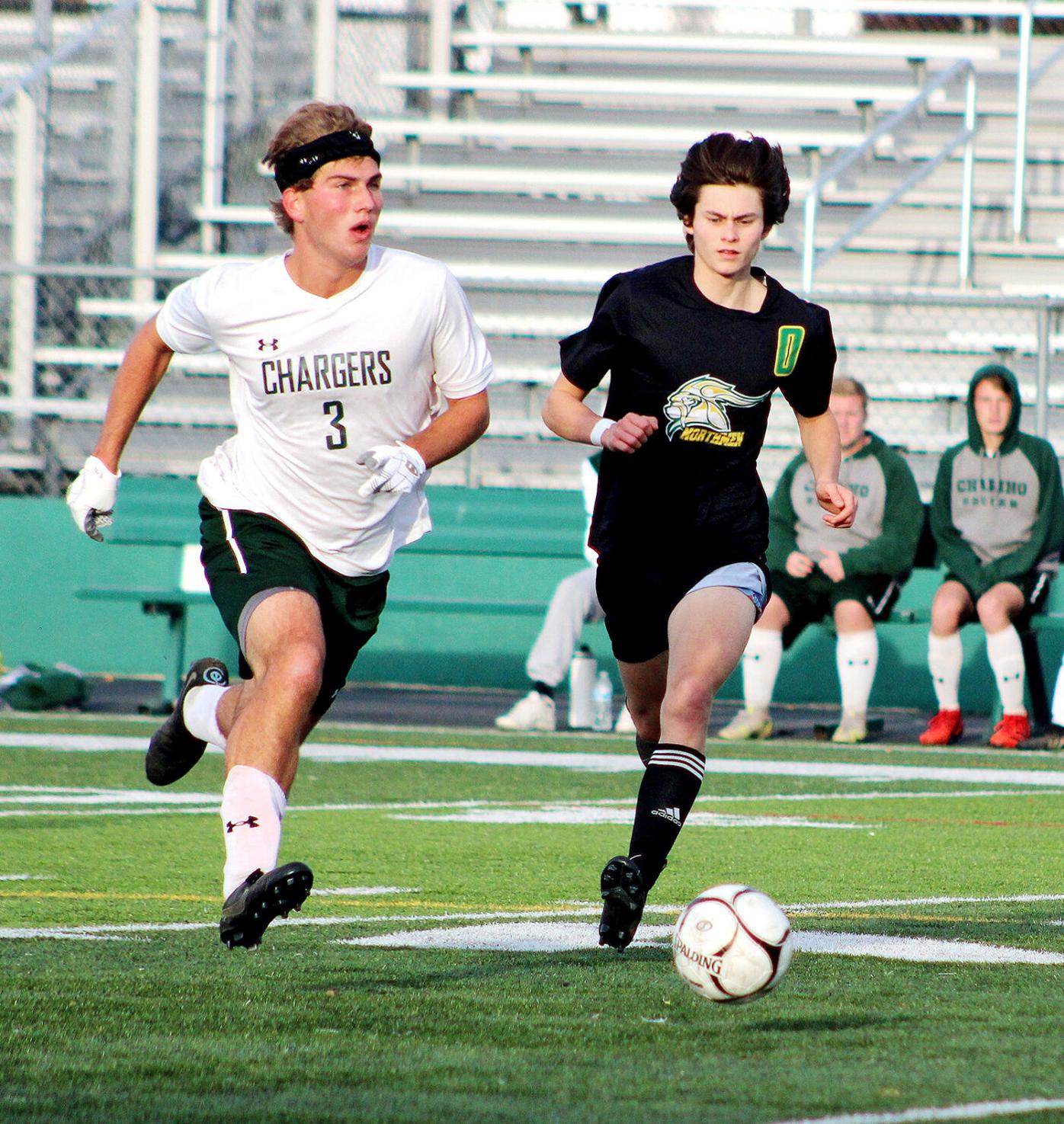 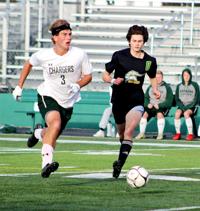 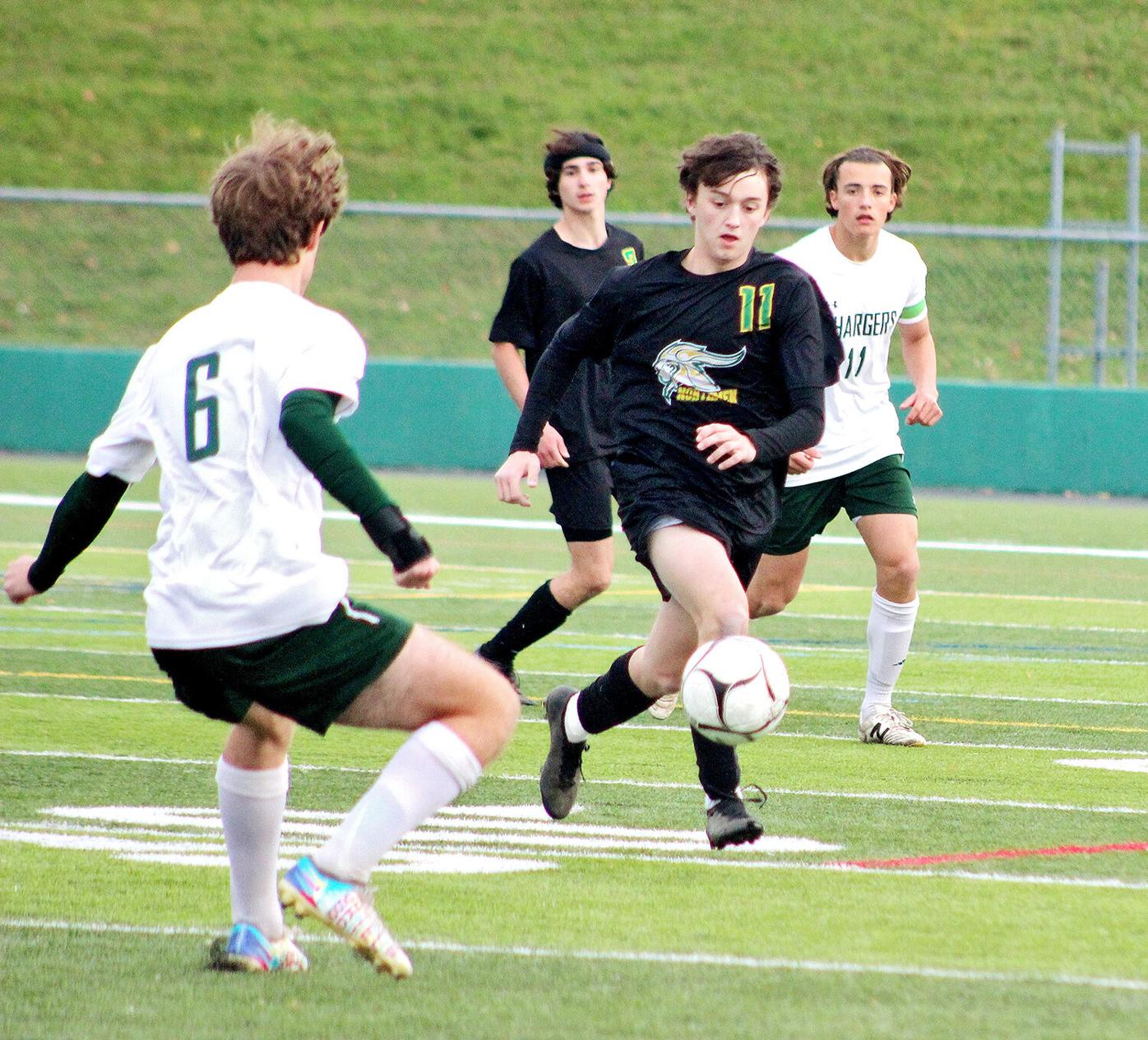 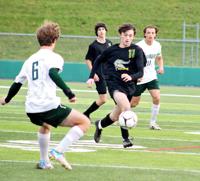 North Smithfield senior Holden Tousignant, #11, goes for the ball as Chariho’s Ian Clark, #6, tries to block it during last Sunday afternoon’s title game. The Northmen were playing in the D-II finals for the third time in the last four years. 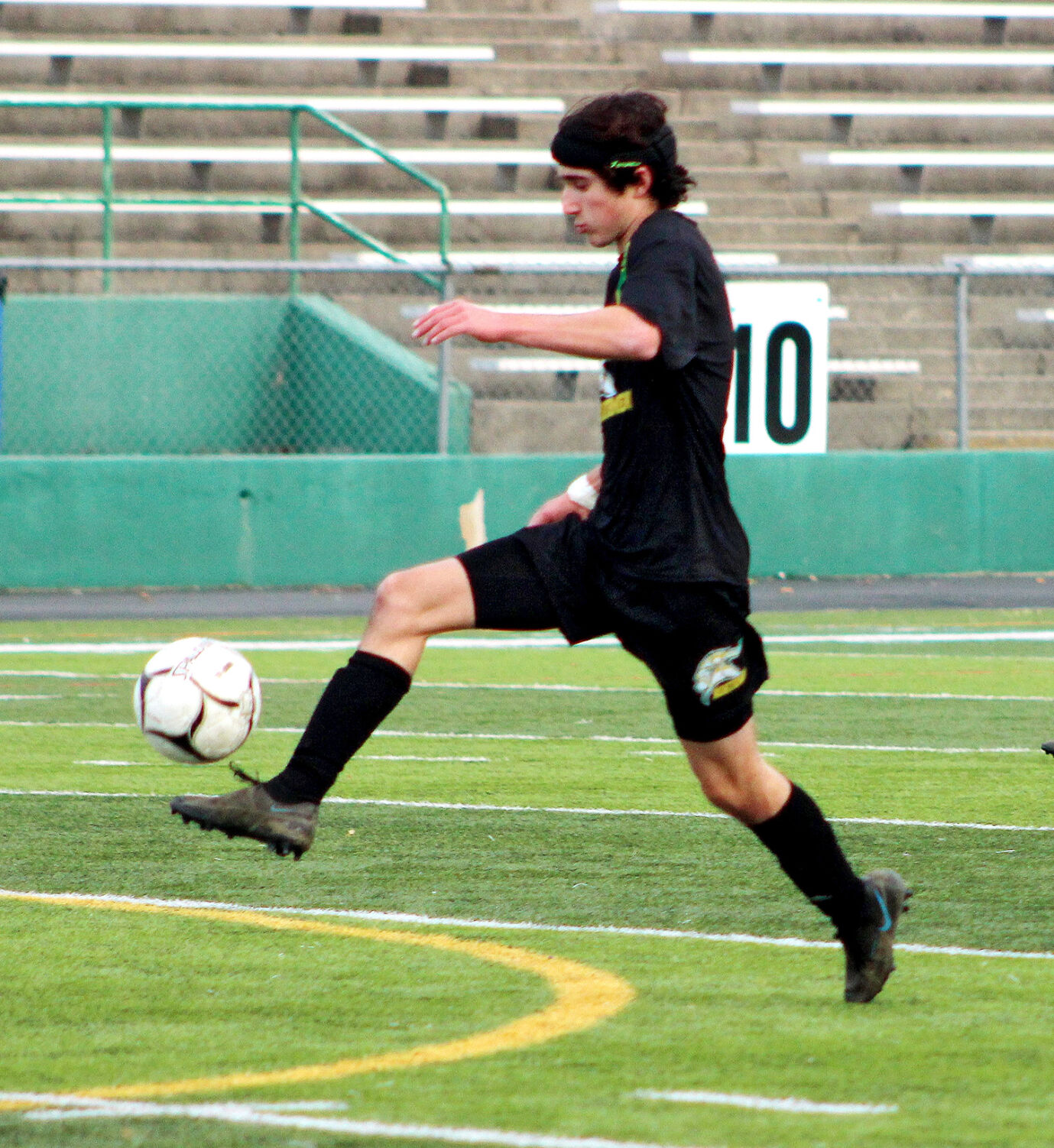 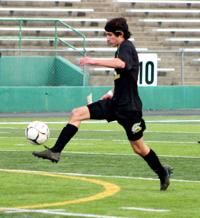 Sprinting the ball down the field on Sunday is North Smithfield senior defenseman Cam Reynolds. 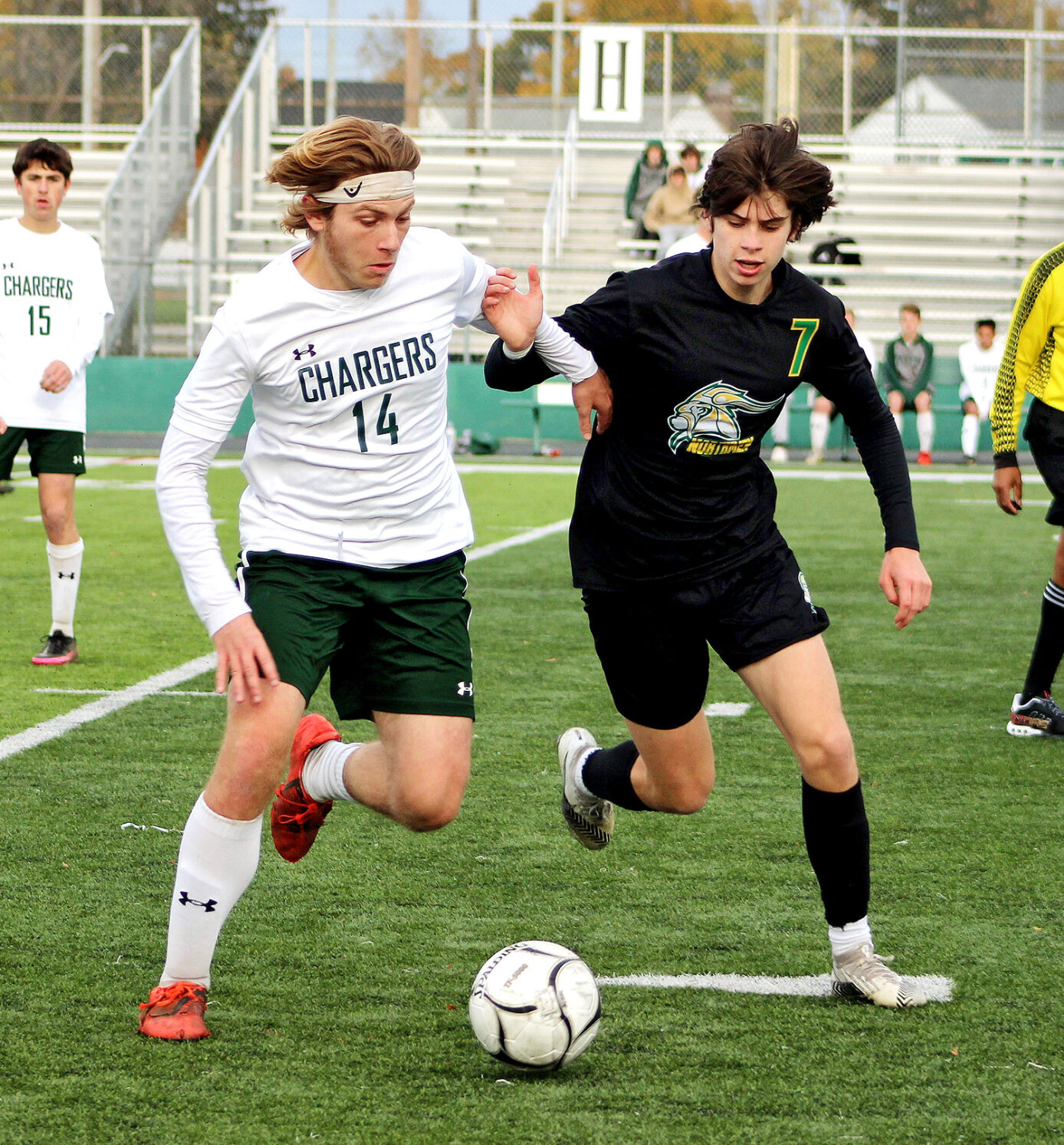 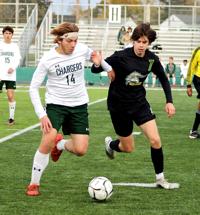 North Smithfield senior Holden Tousignant, #11, goes for the ball as Chariho’s Ian Clark, #6, tries to block it during last Sunday afternoon’s title game. The Northmen were playing in the D-II finals for the third time in the last four years.

Sprinting the ball down the field on Sunday is North Smithfield senior defenseman Cam Reynolds.

For the third time in the last four years, the 3rd-seeded Northmen reached the finals, only to suffer a tough loss, with this one coming at the hands of 5th-seeded Chariho, 2-1.

But what makes this defeat unthinkable? Like the 2018 and ‘19 championship games, against the Wheeler School and Lincoln High, the Northmen lost in double overtime.

“I really can’t put it into words,” N.S. head coach Eric Korytkowski said. “I never thought we would be back here, especially with everything these guys had to overcome this year. They were so young, but the guys came together down the stretch, through all the adversity, and I just wanted it so freaking bad for them.”

“They deserve it. Everything they overcame this year, they just deserve it, and it’s just the worst feeling in the world not being able to deliver it for them.”

With an up-and-down season, and not being able to play their home games on their high school’s turf field, the Northmen, who called the elementary school’s grassy complex its home this fall, battled their way to a 12-1-4 record.

In the quarterfinals, the Northmen netted a 1-0 overtime victory over 6th-seeded Pilgrim in Smithfield, and in the semifinals, the Northmen, thanks to a pair of second-half goals, were able to topple 2nd-seeded Mount Hope in Bristol.

That set the stage for Sunday’s showdown with the Chargers, who played the Northmen to a 2-2 tie in their regular-season meeting on Oct. 5. Both teams were deadlocked after 80 minutes of regulation and the first overtime, but with 1:38 to play in the second OT, Chariho junior Chris Niziolek broke N.S.’s hearts by scoring the title-winning goal.

The Northmen began the game with gusto. They had speed, were all over the ball, and matched the Chargers’ physicality, and in the 14th minute that all paid off with their goal.

Sophomore forward Aidan Bienvenue brought the ball up the field and passed it to his classmate, midfielder Joshua Neves, who crossed the ball back to him, and Bienvenue fired a shot past Chariho keeper Drew DeNoncour.

The Chargers had a few chances but those, were negated either by the Northmen’s defense or keeper Sam Beauchemin. Ethan Knowles took a corner kick for Chariho before the end of the first half that was cleared away, and another quick corner by the Chargers before the half ended was not successful.

But as time ticked off the clock in the second half, the Chargers started to gain momentum while the Northmen fell out of place a bit.

“We played well, but those last 20 minutes, you could just see the nerves kicking in,” Korytkowski added. “Bad touches started piling up, and everybody was nervous and making mistakes. We knew we were a young crew and that was a possibility, so we tried to get some older guys in there to steady the waters.”

With just under nine minutes to go, the Chargers finally slipped a shot past Beauchemin. Jason Nilsson took a shot that Beauchemin blocked, but he couldn’t contain the rebound, and as he was still down, Brendan Allamby drove it home for the equalizer.

Korytkowski said that in close games, his team tends to play a more defensive with 10 or so minutes left. The Northmen were trying to take Nilsson out of the middle of the field, but missed that one play.

Regulation ended with the tie and the first 5-minute overtime began. The Northmen had possession, but the Chargers still carried the momentum. Beauchemin had to make a sliding block to prevent the go-ahead goal by Niziolek, and Niziolek made another shot that Beauchemin caught to end the first overtime.

In the second overtime, the Northmen had a corner and a free kick that could not reach the goal. Allamby then took the ball up the field and passed it to Niziolek, who then took the shot that gave Chariho the lead for good.

That goal deflated the Northmen, who still had some time to score the equalizer, but it was not meant to be, as the Chargers held on for the win.

In the Northmen’s semifinal-round victory over Mount Hope, senior captain Cam Reynolds scored the tying goal on a penalty kick and senior Holden Tousignant delivered the go-ahead goal on a 25-yard free kick that sailed into the top right corner of the net.

Speaking of Reynolds, “there’s nobody I wanted it more than for him,” Korytkowski said. “What kid from North Smithfield High School can say they stepped on a finals field three out of their four years? He’s a leader. He’s a hell of a kid. He’s a friend to me. You just want it so bad for these kids.”

As for this season, “it was just a very wearing season,” the head coach said. “I miss my family, and I want to be home with them. We’ll see what happens next year. These guys have an unbelievable future ahead of them. And I love them to death. I just wish we could get them over that final hump.”