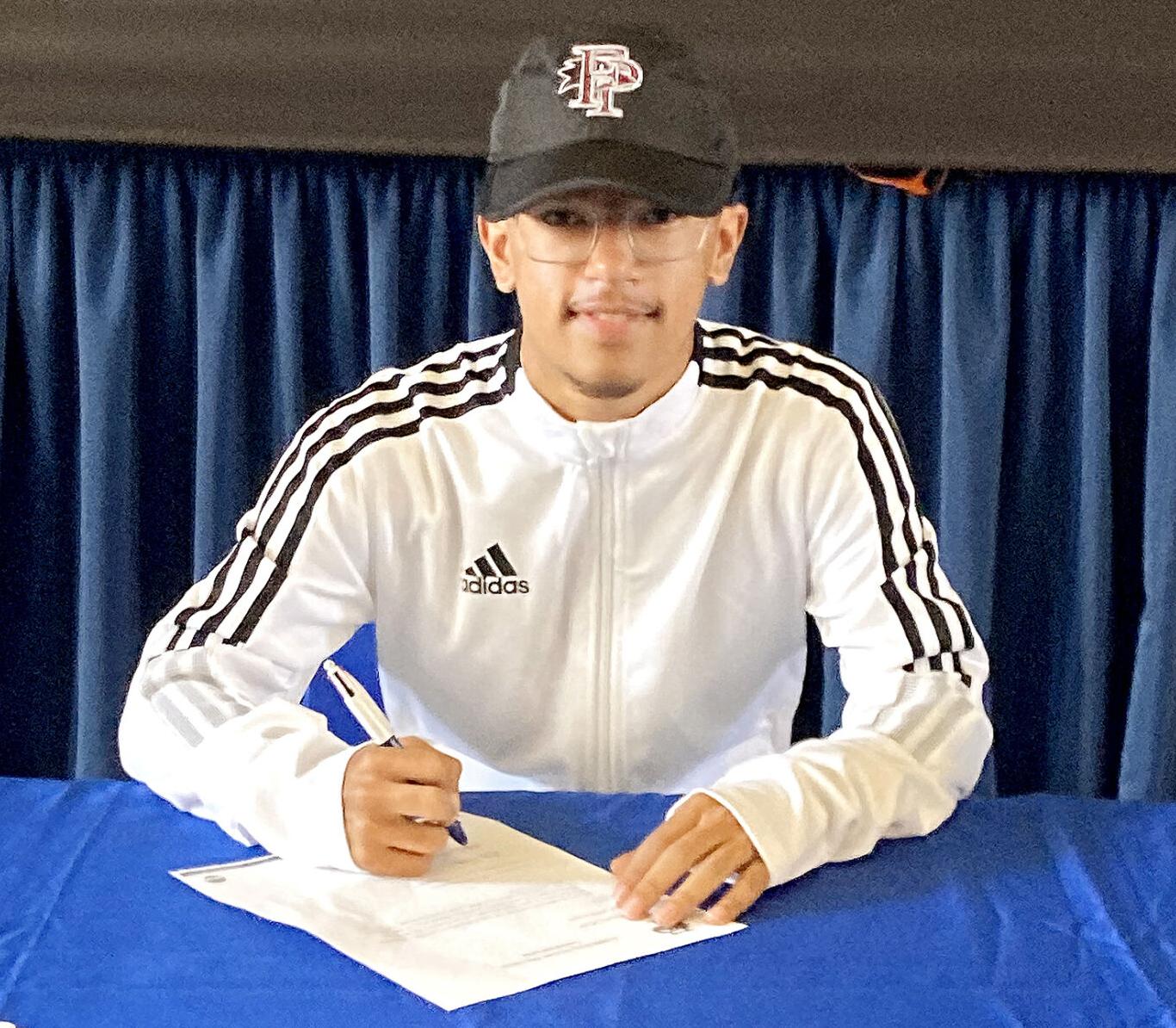 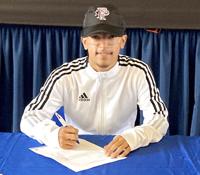 Shea High senior Ahrian Vasquez signs his National Letter of Intent to continue his academic and soccer career at Franklin Pierce University in his school’s auditorium last Thursday. He was a four-year varsity starter for the Raiders and a Second-Team All-Division selection this past fall. 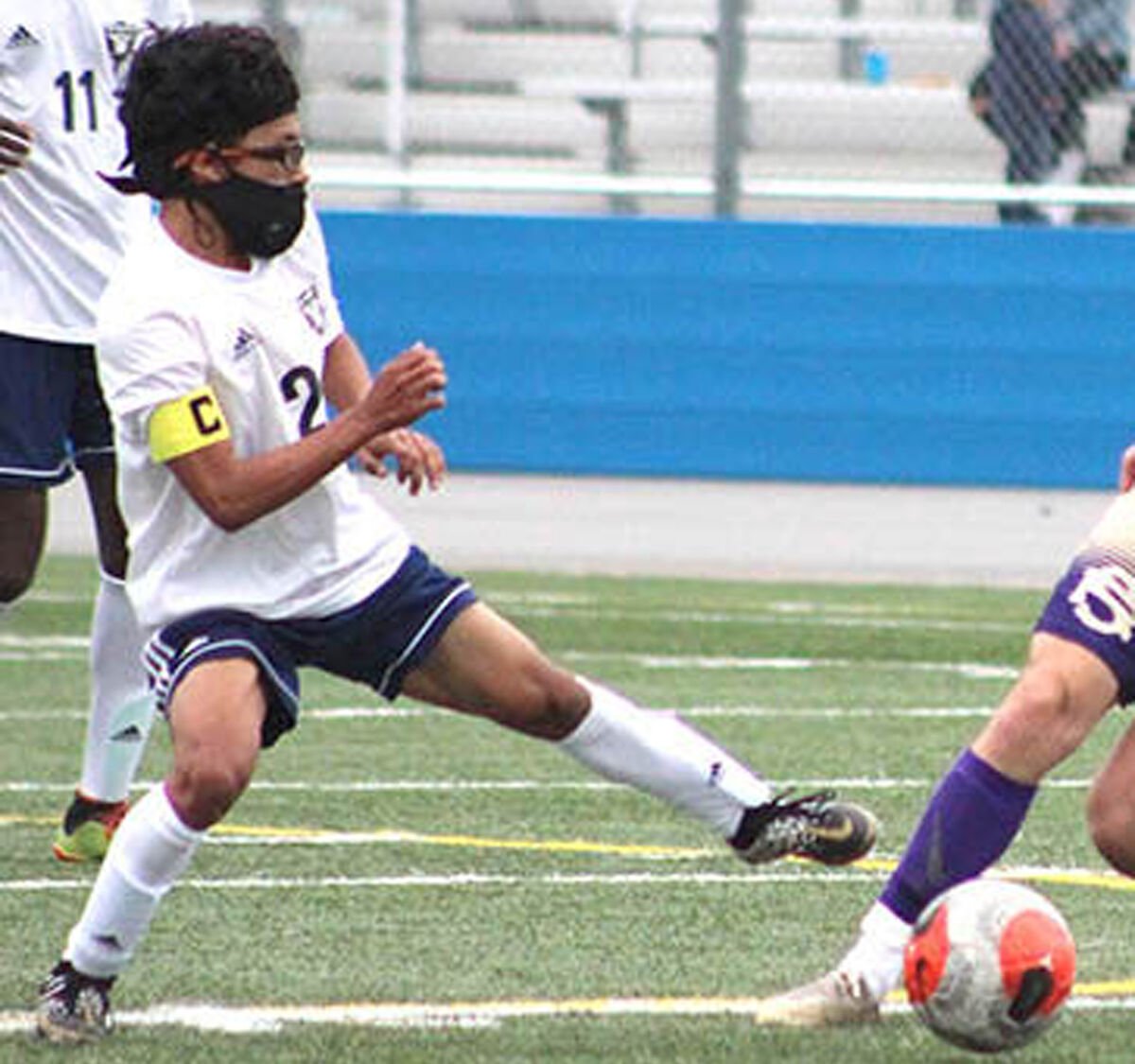 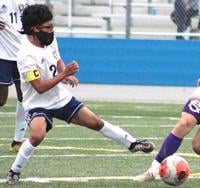 Shea High senior midfielder Ahrian Vasquez, shown in action during a game against St. Raphael Academy at Max Read Field, was a three-time All-Division player for the Raiders. He will continue his soccer career this fall at Franklin Pierce University in Rindge, N.H.

Shea High senior Ahrian Vasquez signs his National Letter of Intent to continue his academic and soccer career at Franklin Pierce University in his school’s auditorium last Thursday. He was a four-year varsity starter for the Raiders and a Second-Team All-Division selection this past fall.

Shea High senior midfielder Ahrian Vasquez, shown in action during a game against St. Raphael Academy at Max Read Field, was a three-time All-Division player for the Raiders. He will continue his soccer career this fall at Franklin Pierce University in Rindge, N.H.

PAWTUCKET – Surrounded by his family, friends, teammates past and present, and members of the Pawtucket School Department last Thursday afternoon, Shea High soccer standout Ahrian Vasquez sat at a table in the auditorium to announce his college decision.

The senior toyed with the crowd, as there were signs and gear from Bryant University, St. Louis University, and Southern New Hampshire University next to him. After he went through each school, he got up to the podium, put on a Franklin Pierce University cap, and officially signed his letter of intent to play for the Division II Ravens.

Going into his decision, Vasquez said, was staying close to home, being comfortable, and finding a school that offered his major, business management. And Franklin Pierce fit all the pieces. The university is in Rindge, N.H., and the men’s soccer team is coached by Ruben Resendes, who Vasquez knows quite well.

“I’ve known him for two years because he coaches my club team, Bayside,” Vasquez said. And this year, he will become my head coach.”

Vasquez added about Resendes, “He really made me feel comfortable. He’ll talk to me after practice, and before practice, to give me tips on what I could do better personally as a player. He would go over different tactics with me and make sure I understand what he wants me to do. I want to continue that in my college career.”

Vasquez started seeing his soccer career come into focus when he was nine years old and asked to join a club team. He then went on to play varsity soccer for the Raiders as a freshman. He said he did not start his first game, but by the second, he was a starter.

Quiet in nature and short in stature, Vasquez was still a force to be reckoned with on and off the field.

“He’s an exceptional kid,” Shea boys’ soccer head coach Pierre Ridore said. “He’s the first one to get to practice, and he’s the last one to leave. The most important thing is that he’s earned the respect of all his teammates. I see some kids that graduated a few years back and they still show up for him.”

“From day one, everyone respected him and everybody loved him,” added Ridore. “He’s not the most vocal guy, but he would lead by example, and all the guys would follow his example.”

Ridore said that Vasquez scored “about four to five goals” this season as a midfielder, but he used him more as a defensive midfielder, as he could cover a lot of ground distributing the ball.

“He has a fantastic shot,” Ridore added. “It was a big decision every year on how to use him at midfield. He just covers so much ground and gives so much effort.”

Vasquez, who is the second Pawtucket player in the last three years to sign an NLI with Franklin Pierce, joining former Tolman All-Stater, and the 2019 R.I. Gatorade Player of the Year, Luis Blanco, will be a midfielder for the Ravens and be used in almost the same role he had with the Raiders.

Last Thursday was truly a celebration for Vasquez, as he was introduced by athletic director Dino Campopiano. Also in attendance and speaking briefly were Pawtucket School Department Supt. Dr. Cheryl McWilliams and Shea principal Dr. Jacqueline Ash, and Ridore also took the podium.

Vasquez’s parents, Vanda and Luis Vasquez, sat in the front row, and he had former teammates return to the campus to watch the special occasion.

“It means the world to me,” Vasquez said about his family and the supporters who attended the signing. “They have always been here, always by my side, in every step of the way. They’re always pushing me to be better, to be a better human, and I love seeing them here today to share this beautiful moment.”

Vasquez has not been able to visit Franklin Pierce yet, but he will do so next month and spend a couple of nights on campus. He said that he decided to pick Franklin Pierce from his list of schools last month, and even though his high school soccer career is over, he has fond memories of his time at Shea.

But his favorite season was his freshman year because “that’s where I met everyone,” he said. “They made me feel comfortable. That’s where I made my most friends that are still here today with me. We still communicate everyday. I met my friends for life my freshman year.”