The members of the Scituate High girls’ volleyball team pose for a picture with their Division III championship plaque and medals after netting a 3-0 victory over Central Falls in last Saturday afternoon’s finals at Rhode Island College. The title was the first for the program in a half century. 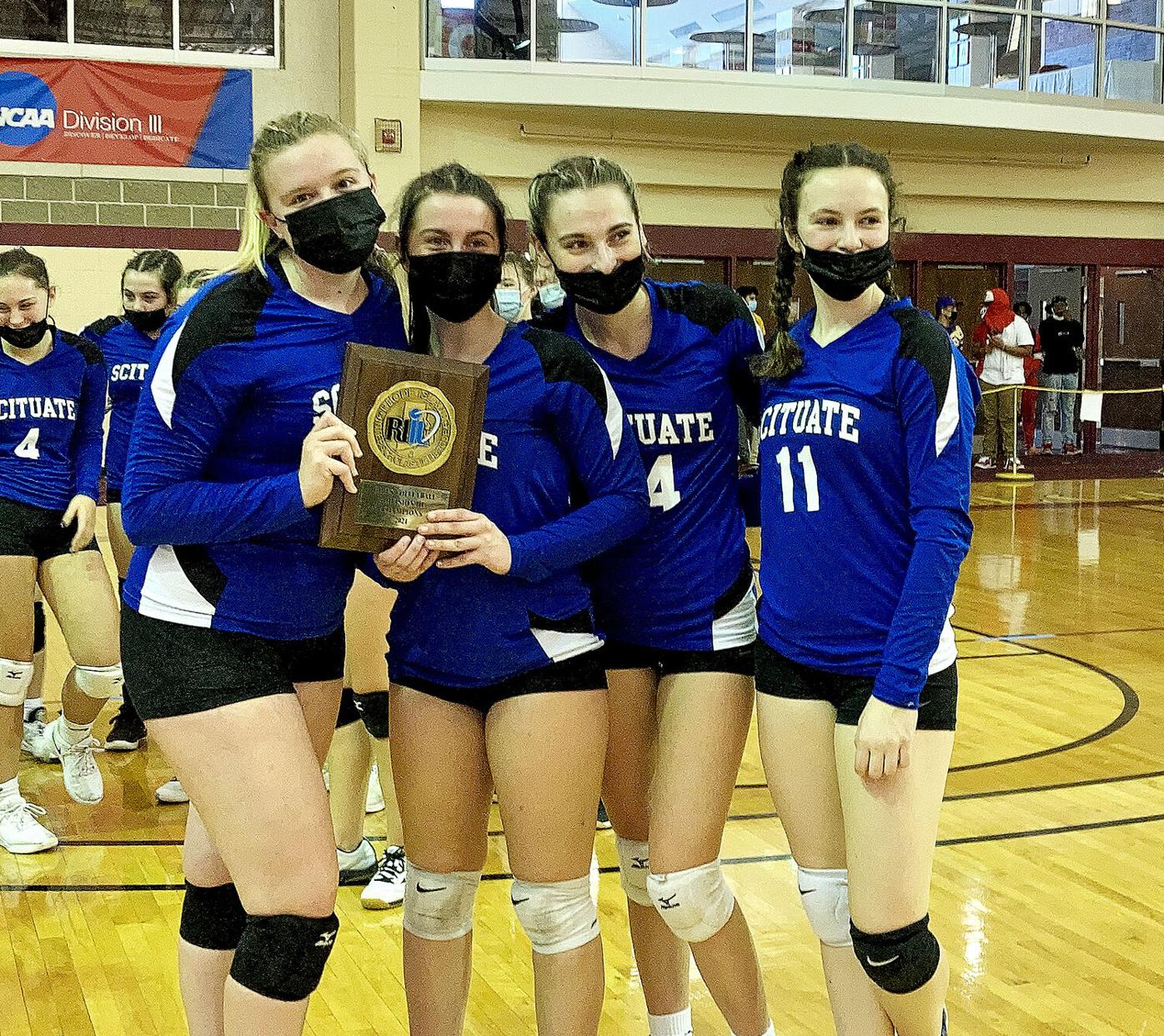 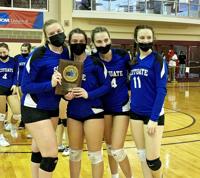 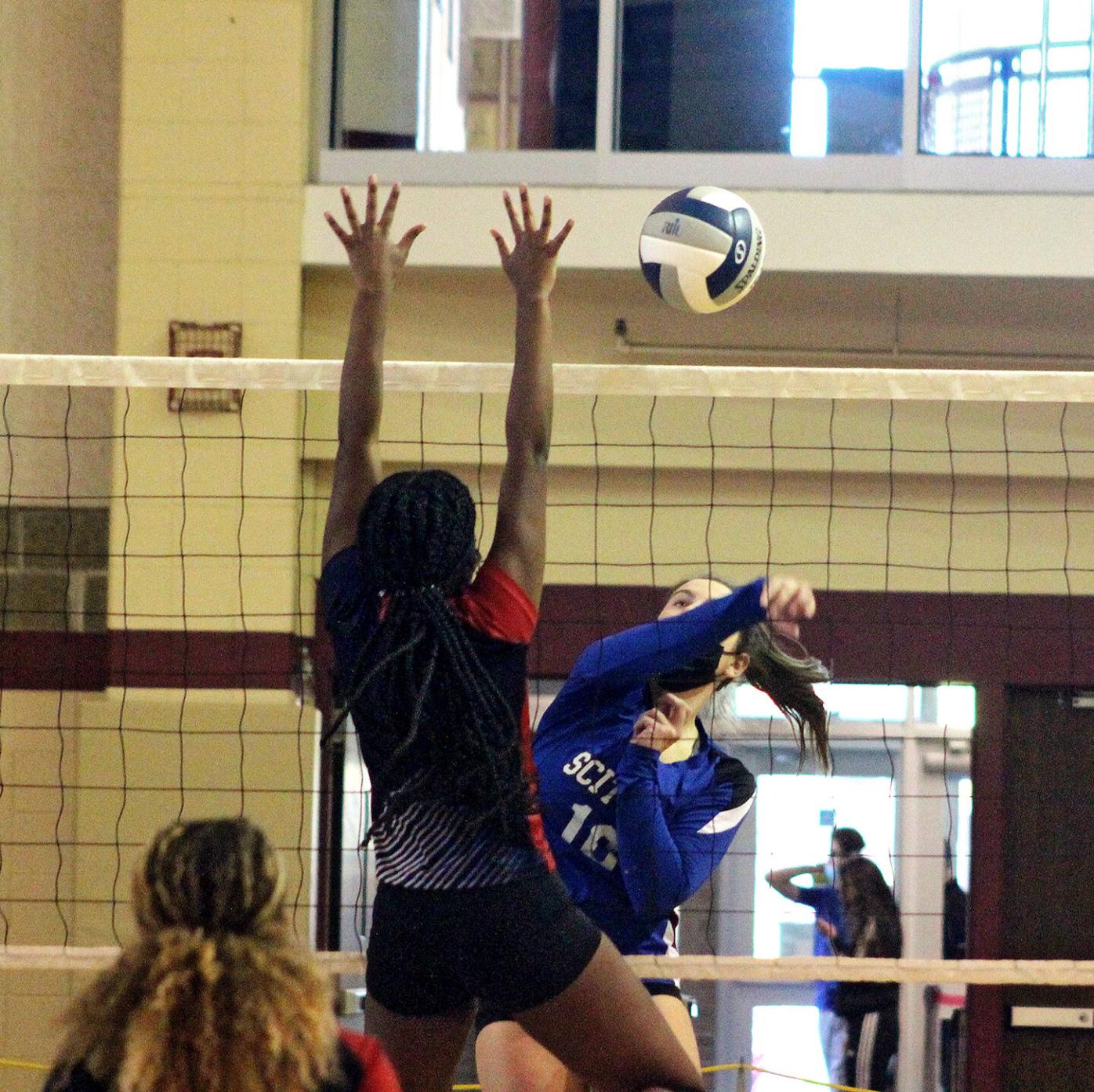 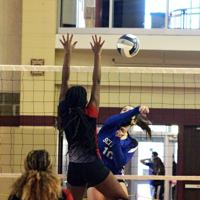 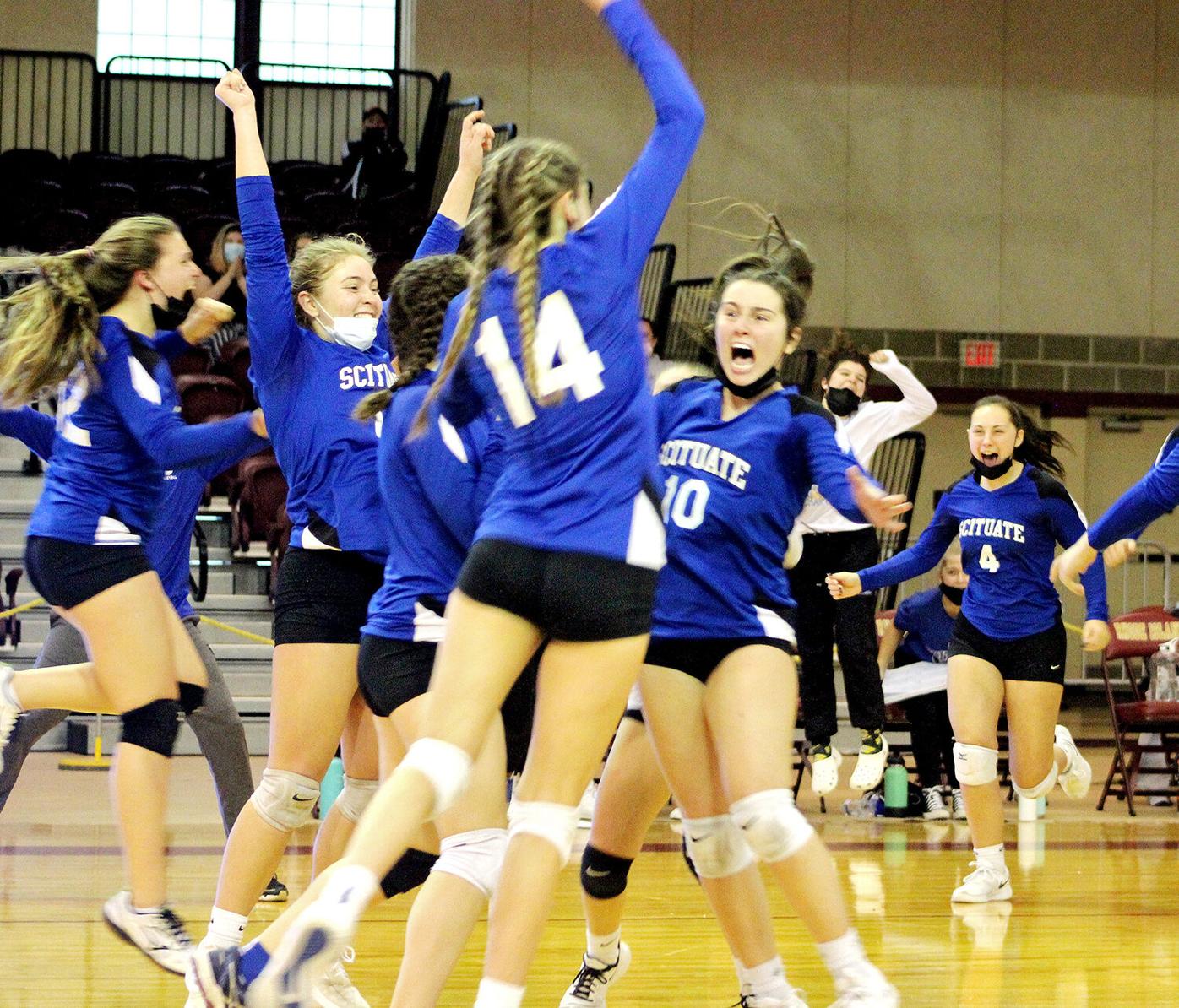 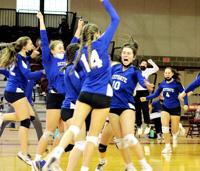 The Scituate players storm the court to celebrate their 27-25, 26-24, 25-19 victory over Central Falls last Saturday at Rhode Island College. Leading the celebration are Pedro, #14, and Geisser, #10.

The members of the Scituate High girls’ volleyball team pose for a picture with their Division III championship plaque and medals after netting a 3-0 victory over Central Falls in last Saturday afternoon’s finals at Rhode Island College. The title was the first for the program in a half century.

The Scituate players storm the court to celebrate their 27-25, 26-24, 25-19 victory over Central Falls last Saturday at Rhode Island College. Leading the celebration are Pedro, #14, and Geisser, #10.

With a lot of coaching turnover in the program, Carvalho, who had spent 25 years as the head coach at East Providence High and guided the Townies to seven state titles before joining the collegiate coaching ranks in 2006, was finally convinced to take over the job last year. Senior captain Emma LaPlante was a big proponent in that idea.

“It took me three years,” LaPlante said. “My mom and I were always asking him and he finally came. Before he came, we moved down to Division IV. Last year, we only lost a few games, but the outcome wasn’t great because of COVID. We got quarantined twice. This year, we came out, improved every single day, and he’s just a great coach. He knows his stuff and he loves us all. And it just makes for a great team.”

The Spartans, who spent last spring in the RIIL’s new D-IV, returned to the D-III ranks this fall and finished their regular season with a 15-6 record. They had their work cut out for them in the quarterfinals against 6th-seeded Tolman, but managed to get a 3-2 win. From there, they built on that momentum and eliminated 2nd-seeded Westerly, 3-1, in last Thursday afternoon’s semifinals.

“I think a lot of our energy (in the finals) was off our game on Thursday,” LaPlante said. “That was probably one of our best games we played against Westerly, after we lost to them twice (during the regular season).”

Carvalho was speechless for a minute after watching his team celebrate their championship on the court.

“They responded well to my coaching, to my antics,” he said when his voice returned. “Sometimes I wonder if I could play for myself, but they responded really well. It’s a credit to these kids. They’ve come way up, and they did a great, great job for us.”

“Everybody contributed,” he continued. “When somebody was down, somebody picked them up. The camaraderie is part of the winning process, and they had it all together. It’s a great group to coach, and they respond well, even when I’m in their face. It’s amazing. It’s worth it. And that’s the only way I know how to coach.”

It was by no means an easy championship match, even with the sweep. The lead kept changing through the first set, and with the score tied at 22-22, the Warriors scored the next two points to force a set point, as Pamela Galva served the ball just over Scituate’s Madison Geisser.

But Grace Luchka served the Spartans back into the game, as they went up 25-24 before the Warriors tied it again, but Rhiannon Walsh served the winning point for the 27-25 victory.

“We almost let (Central Falls) come through,” Carvalho said. “The key to the match was that first set. They had us 24-22, but we came back and we took them. That was great.”

The second set was more of the same, but the Spartans held onto the lead down the stretch. Scituate grabbed a 23-18 lead, but Central Falls was able to battle back and tie the score at 24-24. But Geisser’s kill gave Scituate the go-ahead point, and libero Kailey St. Pierre got the winning point.

The Spartans had a little more breathing room in the third set, but could not close it out as fast as they would have liked, being up 23-14.

“We never shook the nerves, I don’t think,” Carvalho said. “We could have played a little bit better on free balls and stuff, but they were like helter skelter there for a minute. They forgot what we were supposed to be doing and were in each other’s spaces.

“The beauty about today was our service,” he added. “Our serve-receive was good too. And we have to give Kailey credit too. She picked up some nice balls from the (Warriors’) number one hitter. She’s a massive hitter.”

LaPlante served an ace for match point and the title win.

“It feels great,” LaPlante said. “We moved up a division this year, so we didn’t know what to expect in this division. But we just came out here and put our best foot forward. We had Coach Luis behind us, one of the best coaches ever, and the outcome was good.”