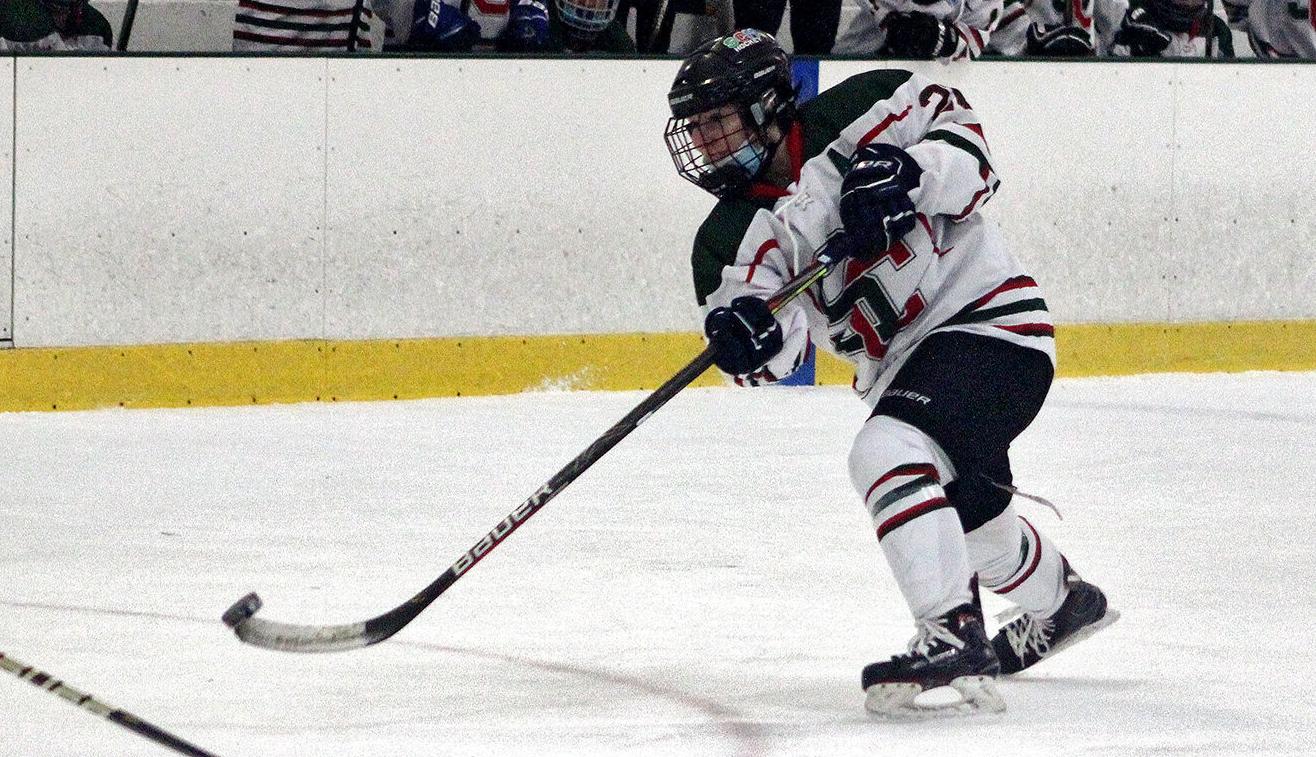 Smithfield/Coventry/Moses Brown junior forward Ava Pomposelli takes a shot on net during last Friday's victory. Pomposelli, who is off to a strong start for the co-op team, attends Smithfield High and is an assistant captain. 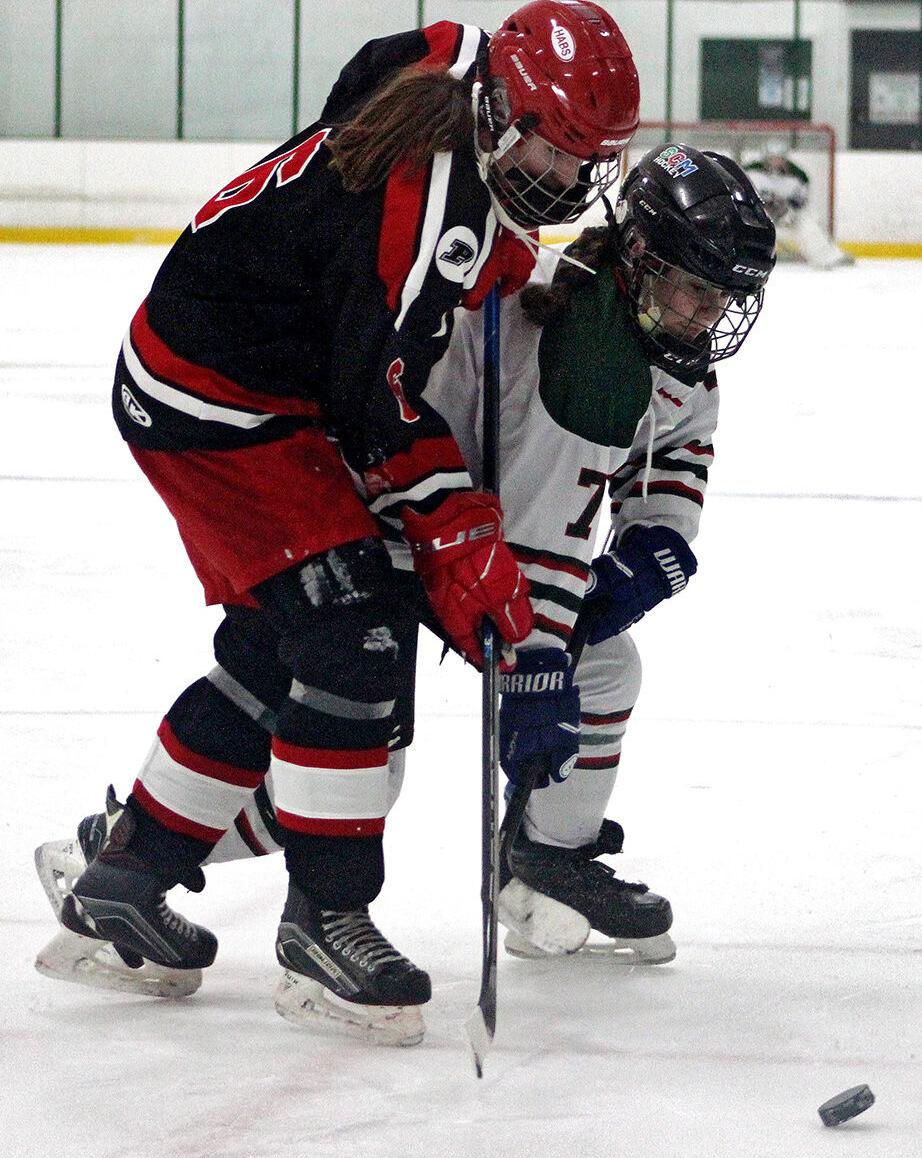 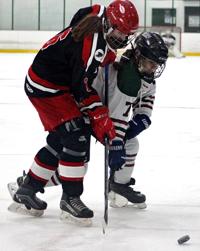 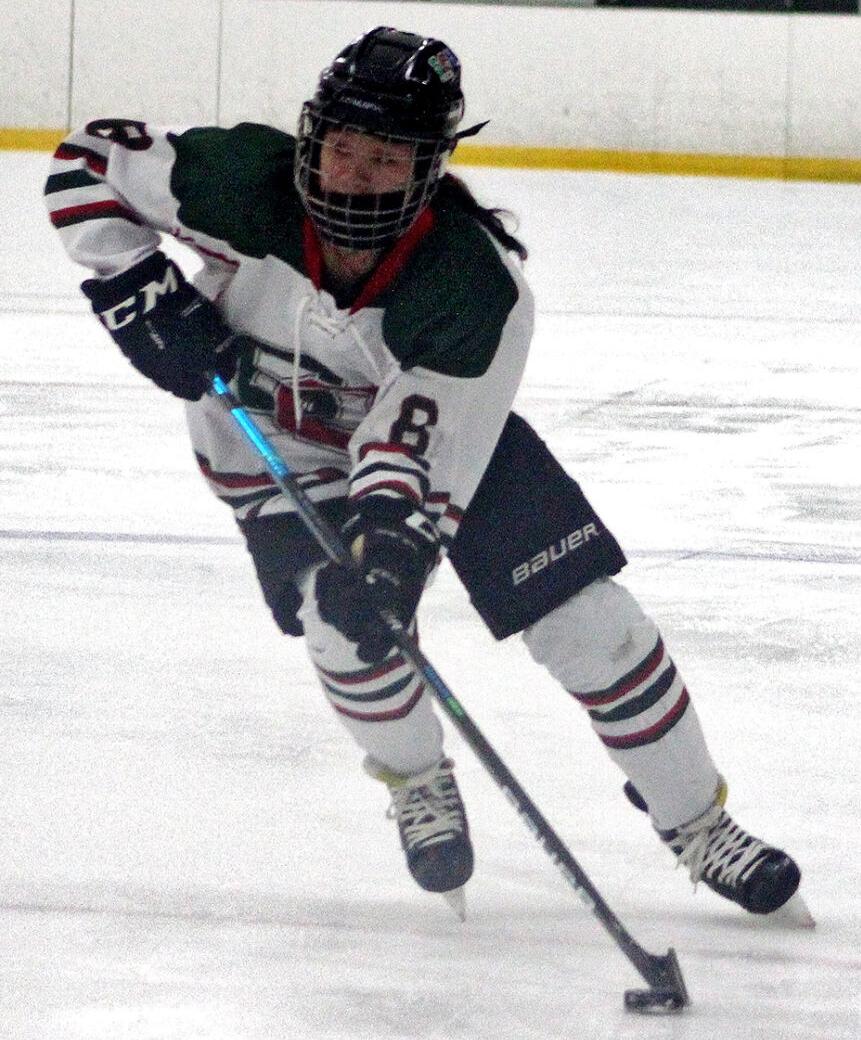 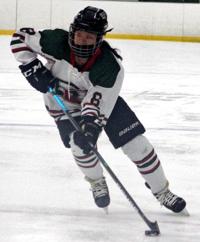 Smithfield/Coventry/Moses Brown junior forward Ava Pomposelli takes a shot on net during last Friday's victory. Pomposelli, who is off to a strong start for the co-op team, attends Smithfield High and is an assistant captain.

SMITHFIELD – The Smithfield/Coventry/Moses Brown co-op girls’ hockey team finished the 2021 portion of its Division II schedule with an unbeaten record after skating to a 7-1 win over the Toll Gate/Pilgrim/Chariho co-op squad last Friday afternoon at the Smithfield Municipal Ice Rink.

The New Year’s Eve victory gives the squad a 4-0 record, which is fourth-year head coach Kerri Nadeau’s best start at the helm. But unlike previous seasons, this winter’s co-op team is blessed with numbers and is one of the largest in the state.

There are 22 girls on the roster, with four from Coventry, five from Moses Brown, and the rest from Smithfield. When Nadeau took over in 2018, she wasn’t even sure she would have enough players to field a team.

That year, Smithfield formed a co-op squad with Coventry and Rogers and played out the season, but now, with Moses Brown in Rogers’ place, more players, and more talent, the team has gotten off to a fiery start.

In its four victories, Smithfield/Coventry/M.B. has outscored its opponents, 31-5. The team’s biggest win came on Dec. 17 at Adelard Arena when it posted a 6-1 triumph over the Mount Saint Charles/Cumberland/Lincoln co-op squad, which had been 2-0.

“The girls have been working hard and buying into everything we’ve been telling them at practice,” Nadeau noted. “One thing we have been trying to do the last couple of years is really go to the net and get a lot of shots on it, and I think it’s been paying off for us.”

One player who is off to a superb start is Smithfield freshman forward Keira Goffe, who currently leads the division in scoring with eight goals and six assists. Right behind her among the scoring leaders is her SHS classmate, Kaylin O’Connor, who had four goals and five assists.

“The girls are really good at coming back,” Nadeau said. “We don’t get down. In the past, it was hard; we didn’t have the numbers, and when we got behind, it kind of sucked the wind out of us. But this year, they’ve been really good with not taking a shift off and doing a good job.”

The hosts eventually put the game away at the start of the second period. A minute and 38 seconds into it, O’Connor made it a 3-1 contest, and nine seconds later, Goffe completed her hat trick.

Coventry sophomore Alyssa DiMaria added another goal before the end of the period, and Smithfield sophomore Sienna-Chin Gerding scored twice in the third period.

Freshman goaltender Abby Enos was between the pipes for the hosts in last Friday’s win, and the co-op team also has two other goalies in Coventry senior Kylie Whelan and Moses Brown freshman Ava Porter.

“We try to start all of them,” said Nadeau, whose captains are Moses Brown senior Mia Stilley and Smithfield juniors Ava Pomposelli and Lauren Falls. “It all depends on who we are playing and how the game goes, but they have all played at least one game now.”

The co-op team, which has also received four goals from Smithfield freshman Suzanne Laflamme this winter, had kicked off its season with an 11-3 win over Toll Gate/Pilgrim/Chariho.

“We just want to continue to play well and keep building off these games,” added Nadeau, whose team will also again face Toll Gate/Pilgrim/Chariho on Saturday at 6 p.m. at Thayer Arena. “We have a lot more tougher teams coming up in the future, so we want to keep working hard and doing the little things that have been successful for us.”